This website requires certain cookies to work and uses other cookies to help you have the best experience. By visiting this website, certain cookies have already been set, which you may delete and block. By closing this message or continuing to use our site, you agree to the use of cookies. Visit our updated privacy and cookie policy to learn more.
Home » TikTok Takes Off, But Should HVAC Contractors Hop On?
HVAC ContractingNewsBusiness ManagementServices | Apps | SoftwareApps & Software

TikTok Takes Off, But Should HVAC Contractors Hop On?

TikTok. At the start of the year, most adults knew little of the app for making very short videos. Those who did often thought of it as yet another fad for kids. Then came COVID-19 and suddenly, everyone was using it to entertain themselves while they stayed at home. In the fall, TikTok became a national security issue, with President Trump threatening to shut down the app just as its popularity soared.

Is it time for contractors to consider including TikTok in their marketing strategy? Or is it still too soon? The demographic of TikTok has definitely changed in the past year. About 60% of users are under the age of 30, with about half of those under the age of 20, according to App Ape. But the number of adults is increasing. In February, marketing agency Omnicore reported the number of U.S. adult TikTok users grew 5.5 times in the prior 18 months. The number has undoubtedly grown since then.

This means more homeowners are watching videos via the app. But is it enough? Mckena Harless, social media manager for Daffan Cooling and Heating in Granbury, Texas, said she uses TikTok personally and often draws ideas from it for her Facebook videos. Still, Harless feels it doesn’t reach enough people in her firm’s demographic to warrant the effort.

Harless does think that’s changing quickly. Her thirtysomething aunt has started sharing TikTok videos on her Instagram page. That’s one factor to take into account. Even if older consumers avoid TikTok, they see the videos on different sites.

Those who do use TikTok spend a lot of time on the app. Although the average is less than an hour, people online joke constantly about losing hours just scrolling through videos. What are they watching? Sleeping puppies are pretty common, Harless said. So are dance and lip sync videos, due in part to the app’s earlier incarnation as Musicly, an app dedicated primarily to those. 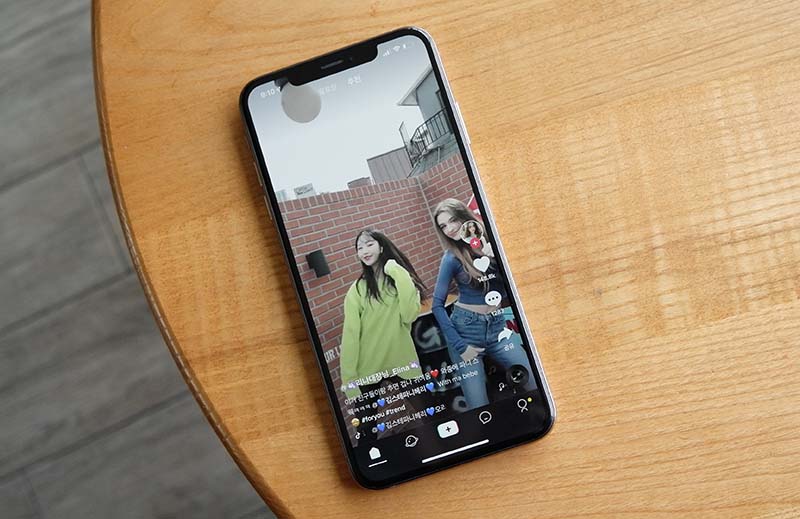 Harless said these are the videos one used to find on Facebook and YouTube, before those sites became more dominated by professionals. She compares TikTok with reality TV, offering an authenticity other sites lack. TikTok also has a reputation for being very positive, unlike other social media sites such as Twitter.

“It’s very easy to find that joy there, and that’s what people want,” Harless said.

Harless said anything can go viral on the app. That appeals to her as a marketer. The downside of TikTok is that anything can go viral, said Justin Jacobs, marketing coach for Hudson Ink. While most TikTok videos are just innocent fun, some of the content is questionable. For example, TikTok bans a lot of content, including anything of a highly sexual nature. But there are still a lot adult film stars on the app, although mostly clothed.

Like other social media apps, TikTok places limits on speech. Like Twitter, though, that still leaves plenty of room for controversial conversation. Topics such as mask wearing have become causes of conflict. Humor often winds up being taken seriously.

“In today’s culture, it’s hard to crack a joke without offending somebody,” Jacobs said. “You’re guilty until proven innocent, and most of the time, you don’t get a chance to prove you’re innocent.”

HVAC contractors who experiment with TikTok need to keep their posts light, Jacobs said. Quick instructional videos on topics such as tying a fish fly or cooking an easy recipe prove popular. Jacobs suggests doing something similar to promote an HVAC business.

Some popular HVAC videos on TikTok include tool demonstrations and installs set to music. Main Street Heating and Cooling did a video about how its staff made masks for hospital workers out of spare filters.

There are also plenty of videos from HVAC technicians on the job. Most try to be humorous, such as a young man sweating in an attic and saying, “People ask me what I do all day.” Others feature especially dirty air filters that technicians encounter.

These videos make Jacobs a little nervous. He said HVAC contractors want to avoid anything that might embarrass customers or violate their privacy. They need to have rules for how employees use TikTok on the job, just like they do for all other social media.

Try It, See What Works

Kyrus Keenan Westcott, social media team leader for 1SEO, said one topic might be how to tell if a furnace needs replacing. Westcott advised contractors to start trying out TikTok today. He recommends a post a week. The investment is small. The videos are limited to one minute. The only equipment investment is a smartphone. 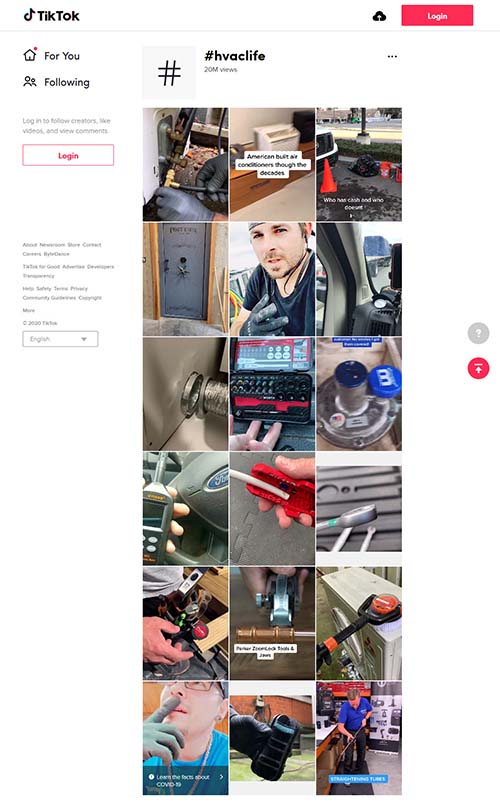 HASHTAG: TikTok displays videos tagged with #hvaclife. Like other social media, HVAC contractors need to include hashtags to reach the right groups.

Some HVAC contractors already have content they can reposition for TikTok. Harless considers doing that. She already keeps her Facebook videos fairly short, so editing them down won’t take much work. Harless just wants to make sure she does it right. Her initial thought is to take her funniest tech and have them do something outrageous.

A minute or 30 seconds seems like a short amount of time to get a message across, even though that’s how long TV commercials were for decades. Westcott recommends HVAC contractors try different themes. He suggests instructional videos, before-and-after presentations, and staff profiles.

Whatever an HVAC contractor does, Westcott said success comes from analyzing what works and posting consistently. Also, don’t forget the hashtags. As with other social media, these are crucial for reaching local customers.

“It’s a process,” Westcott said. “With consistency comes trust. Trust doesn’t come overnight. People want to hear your story. If you can humanize yourself, people are more likely to come work with you.”