Five years ago, the Top 50 HVACR Distributors survey revealed that 96 percent of respondents had achieved increases in their HVACR sales in the latest fiscal year. This year’s survey nearly matched that phenomenal growth, with 95 percent of all respondents reporting increased HVACR sales.

The outlook for fiscal 2019 is also bright, with 91 percent of all respondents projecting increased sales, and 9 percent expecting to maintain sales at the same level as they did in 2018.

Looking only at the Top 50 companies, every single one showed higher HVACR sales in fiscal 2018 vs. 2017. Thirty-seven of the Top 50 reported double-digit sales increases, and of those, six saw their HVACR sales jump 20 percent or more from the previous year.

AC Pro, Fontana, California, moved up the Top 50 ranking chart from No. 34 in the 2018 survey to No. 26 this year. The company reported a 20 percent-plus increase in sales for 2018, which it attributed to the opening of three new locations in Southern California, additional sales team members, a big push behind its e-commerce/online store, and a focus on quality training for customers and associates. 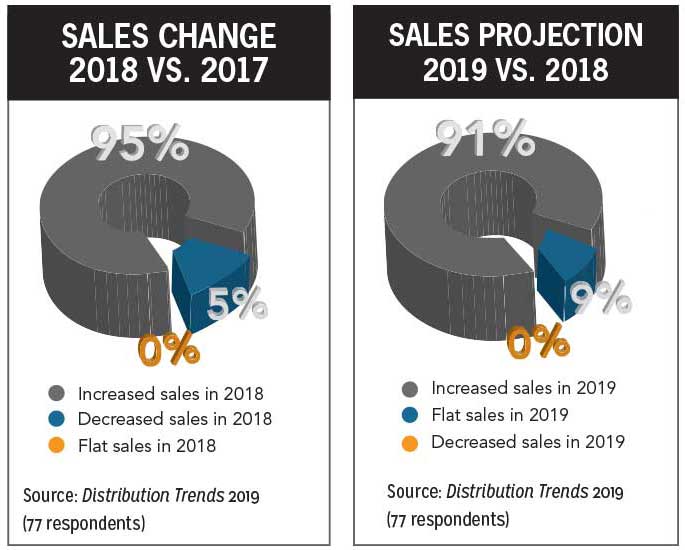 Watsco Inc., Miami, has remained No. 1 on the chart for every year of the survey. In 2018, Watsco reported record results for the 2018 fiscal year and also marked its 30-year anniversary in HVACR distribution.

“We’re proud of our track record and industry leadership position, but there is much more for us to achieve in the $35 billion North American HVACR distribution market,” said Albert H. Nahmad, chairman and CEO, Watsco, in a statement. “We continue to challenge Watsco’s leaders to grow, innovate, and build on this success, particularly in light of the cultural and technology evolution underway.”

Since 2012, Watsco's technology team has tripled in size, expanding from 60 employees to more than 200. The distributor has added more than 250 customer-facing personnel and functional leaders and recently launched a productivity initiative. Watsco also has increased its annual 401(k) matching contribution.

Minnesota Air is a family-owned business that started out as an independent plumbing wholesaler in the U.S. in the early 1950s. In 1981, Minnesota Air was created as a wholly owned subsidiary of that company. In 1999, it became a separate corporation, distributing equipment, parts, and supplies to HVACR contractors in Minnesota, eastern North Dakota, and western Wisconsin.

The Granite Group is a full-service wholesale distributor of plumbing, heating, cooling, water, and propane supplies, serving all of New England.

“Labor shortages will continue to put additional pressure on distributors and contractors,” he said. “Price increases will also continue to be a challenge in the overall cost of new construction and replacement markets. Additionally, the new fan efficiency ratings requirement this July will require a lot of education for consumers and builders alike. The new standard comes with increased cost but will greatly reduce energy consumption in homes and commercial buildings.”

Bedard also noted that changes in high-efficiency rebates will have an impact on product mix.

“The anticipated softening of the new construction market will also impact the industry,” he said.

“Concerns include single-family construction, which is affected by interest rates, among other things; availability of an adequately trained workforce; and the simple fact that this recovery has been going on eight years,” he said. “That's a longer than average recovery.”

Devin Watts, treasurer, M&A Supply Co., Brentwood, Tennessee (No. 54), a distributor of residential and light commercial HVAC equipment and supplies, said the performance of the economy will continue to be a significant factor.

“The economy, trade issues, and tariffs impact the amount of disposable income consumers have to spend, which will drive the market,” he said. “Will costs rise to a point where the replace versus repair issues arise? Do consumers have enough disposable income to continue to replace the backlog of systems in the installed base that need to be replaced?"

Like many of his peers, Peter Warren, CEO, Benoist Brothers Supply Co., Mount Vernon, Illinois (No. 55), a full-service wholesaler distributor of heating and air conditioning products, cited the economy, price increases, and labor availability as his most pressing concerns.

“We expect the commercial market to stay strong in the New York metropolitan area, as building owners continue to exercise Section 179 of the tax code, which allows for immediate depreciation of new HVAC systems,” he said.

“The trends are positive, and we believe 2019 will have significant growth opportunities for distributors who are positioned correctly,” he said. “We see engineered products, projects — both plan spec and design build — as opportunities for significant growth. We're also seeing nice increases in our B2B e-commerce platform. Large commercial refrigeration projects are increasing as well.”

Teri Moyer, CMO, Advanced Filtration Concepts (No. 71), Norwalk, California, cited government and state regulations regarding air filtration and IAQ as well as tariffs as factors that will impact HVACR distribution.

“We anticipate our growth to come from the multi-zone ductless mini-split category,” he said. “This category has been growing year after year.”