For fiscal year 2016, 90 percent of respondents to the Top 50 HVACR Distributors survey reported a sales increase.

Meanwhile, this upward trend in sales is expected to continue, according to 94 percent of all respondents. The average HVACR sales increase projected for 2017 was 9.4 percent.

The 2017 edition of the survey received responses from 73 distributors, up from the 61 who responded in 2016, but down from earlier years when 80 to 90 of distributors typically responded. 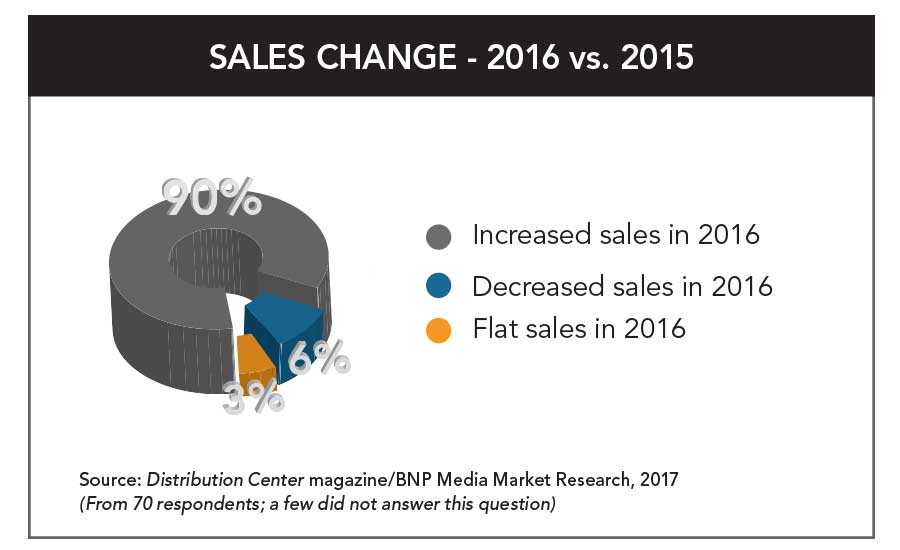 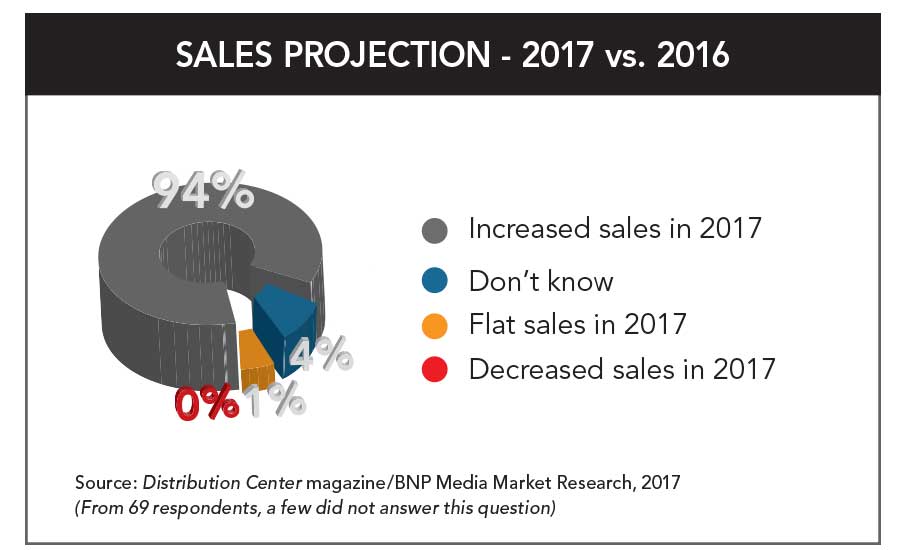 ABCO shared a holiday greeting with customers in December, reminding them of its “extensive inventory, unsurpassed customer service and unmatched delivery capabilities.” Among the heating and comfort solutions the company offers are products from Mitsubishi, HyperHeat, Luxaire furnaces, Honeywell thermostats, Dunkirk boilers, NTI boilers and Reznor unit heaters. ABCO was established in 1949 and the company describes itself as the largest full-line distributor of HVAC and refrigeration systems and supplies in the Northeast United States. After a review of the Top 50 HVACR Distributor studies, starting from the first one published in May 2012 through 2016, this is the first time ABCO has appeared on the list.

Williams Distributing was No. 50 on the list in 2015 and ranked No. 51 in 2016. Seventy-seven percent of the company’s total business is in HVACR. It reported substantially higher HVACR sales in 2016 compared with 2015, and attributed the double-digit percentage increase to the inclusion of hearth sales in its figures.

HVAC Distributors is a full-service wholesale distributor and manufacturer’s representative of residential and light commercial heating and air-conditioning equipment and accessories. The company serves the residential new construction, residential replacement and light commercial segments of the HVAC industry in Pennsylvania, Maryland, Delaware, Northern Virginia and western New York. HVAC Distributors last appeared on the 2012 Top 50 list, ranked at No. 46.

Every year since the first study in 2012, the same three companies have occupied the top three positions in the ranking chart in the same order:

In a presentation to investors last year, Watsco estimated the size of the North American HVAC distribution market at $35 billion, highly fragmented, with more than 2,000 family-owned distributors. Watsco also shared its long-term goals:

operate the most innovative suite of technology in the industry;

create and maintain the industry’s deepest repository of information regarding products, markets and customers;

accelerate sales growth and market share gains for its supplier partners; and

Johnstone Supply celebrated the opening of its 400th location in June 2016. The Kenilworth Group, one of the cooperative’s leading members, opened a 12,500-square-foot branch in Toms River, New Jersey. It includes 4,000 square feet of showroom space and an 8,500-square-foot warehouse. Johnstone Supply said its members cover every major metropolitan area, with locations in 47 states across the country. In addition to equipment, the cooperative wholesale distributor supplies repair and replacement parts for residential, commercial, refrigeration and facilities maintenance contractors.

Wolseley, Ferguson’s parent company, announced John Martin as its new group chief executive in September, following the retirement of Ian Meakins in August. Additionally, David Keltner, who spent more than 10 years as CFO of Ferguson, took on the role of interim group CFO. According to Wolseley, Ferguson is the largest business in the Group; accounting for 84 percent of the Wolseley Group’s profitability. Wolseley also announced a name change for the Wolseley Group to Ferguson plc, subject to shareholder approval.

“We are proud to have the Wolseley Group adopt the Ferguson name,” Ferguson CEO Frank Roach said in a statement. “We have built a very strong brand over the last 64 years and are known for our performance reputation. The Ferguson name best represents the Group today and will help create greater shareholder interest in the U.S.”

Meanwhile, the average number of branches/locations reported by all respondents was 30 that carry HVACR only; 24 that offer HVACR and other products; and 14 that offer non-HVACR products.

Lastly, 74 percent of respondents reported that they expect to hire more employees in 2017; 20 percent said their employee count would remain flat; and 6 percent said they didn’t know.

N.B. Handy moved up the ranks in the Top 50 this year, and Tom Mills, executive vice president, said he projects the company will have a very strong performance for 2017. He attributed expected growth to the leadership of the company’s new CEO, Rosana Chaidez, who has led a renewed sales effort.

Twenty-seven of the Top 50 distributors said 100 percent of their sales come from HVACR.

This year’s study also asked respondents what factors they expect to most impact HVACR sales in 2017.

“The election is the biggest factor,” added Jim Fabricatore, vice president, Dunphey & Associates Supply Co. (DASCO). “I feel that this president is going to enable huge job growth and be very friendly to business.”

Tommy Hadaway, owner, Opelika Supply said the factor to most impact sales this year will be regulations.

Competition with Amazon and other e-commerce entities will be stronger.

Phase-out of R22; the economy, weather and legislation.

The end of dry-ship R22 units.

Increasing interest rates will begin to slow residential construction, but the Trump Bump in consumer optimism will offset it.

Construction starts have continued to rise in recent years, allowing for confidence in a solid HVACR distribution market throughout 2017. The overall strength of the U.S. economy, in terms of job and wage growth, also bodes well for 2017 as disposable income will be available for homes in need of repairs or upgrades. Lastly, government policies, including limiting hydro fluorocarbons and tax incentives for energy-efficient equipment, should also provide a boost to the industry (particularly newer, greener and more efficient equipment).

Other respondents expressed concern over the competition with online retailers, especially low-ball pricing that hurts margins. Another distributor commented that as HVACR products become more computerized, their life span shortens, comparable to a computer or car. Yet these new HVACR products will be more efficient and user-friendly. Techs will be more than mechanics, they will have to be engineers.

Total HVACR sales have increased for the Top 50 distributors every year since the survey was started.

“It’s tremendous to see the growth of these Top 50 distributors, and the overall HARDI membership, at a significantly greater rate in 2016 than most anticipated,” said HARDI CEO Talbot Gee. “Seeing new companies join this respected list is exciting; many of whom think and act strategically to put their companies on a long-term growth plan.  Federal policy should not be a headwind to distributors’ growth for the first time in many years so I can’t wait to see how these strong companies perform in 2017.”

Not all of the Top 10 Distributors in our segmented list were in the overall Top 50.