91 percent of the surveyed distributors reported sales increases in 2017

Of the 67 companies that responded to this year’s survey, plus the two for which we estimated, 91 percent had higher sales in fiscal 2017, up again from 90 percent in fiscal year 2016. The average increase in fiscal year 2017 was 8.5 percent. A record 98 percent of distributors surveyed are projecting a sales increase for fiscal year 2018, averaging 8.9 percent.

This year’s survey respondents represented a total of $17.7 billion in HVACR sales, which is a significant increase over last year's total of $16.9 billion. 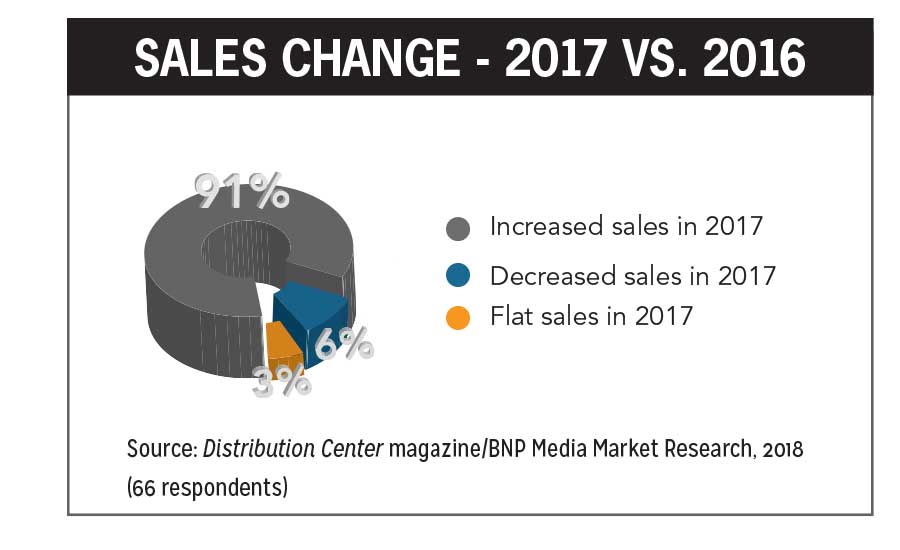 HARDI members accounted for 98 percent of all respondents, further demonstrating the influence of the organization. 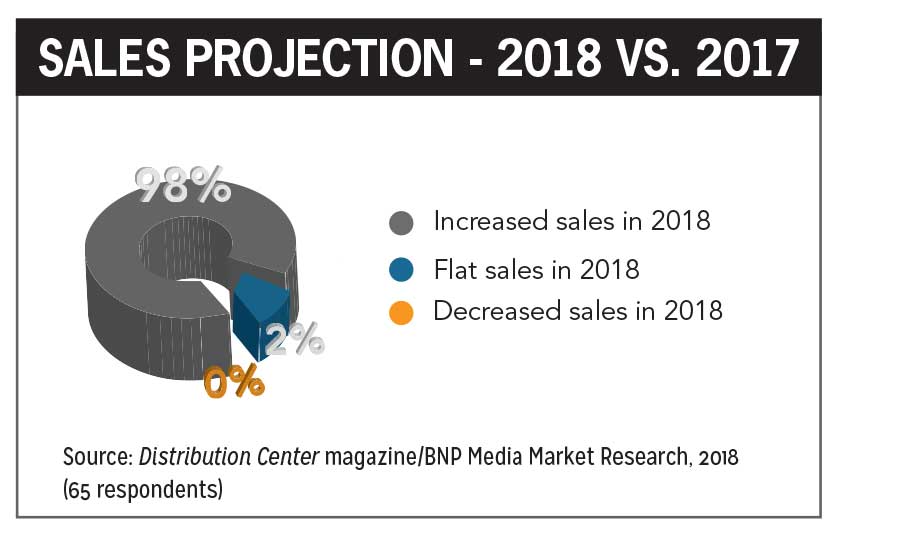 “It is such a fantastic indicator of strong, sustained growth in our industry when we look at the past year’s performance in these Top 50 Distributors,” said Talbot Gee, CEO, HARDI. “We see that many out of this group saw double-digit growth, which also points to a strong economy and receding regulatory encroachment. I am excited to see the impact the recent tax cuts that went into effect this year will have for these top performers in 2018.”

Other distributors new to our list include Hunton Distribution, debuting at No. 27; Locke Supply Co. at No. 36; Epting Distributors at No. 48; and S.G. Torrice Co. at No. 50.

In June 2017, Watsco Inc. announced its Carrier Enterprise business unit, a joint venture between Watsco and Carrier, had acquired 35 percent ownership of Russell Sigler Inc. Now operating as Sigler Wholesale Distributors, the company ranked No. 5 on this year’s Top 50 list.

“The Sigler organization has our respect, admiration, and commitment to provide ideas and assistance to build on its historical success,” said Albert Nahmad, chairman and CEO, Watsco, in a statement.

In its announcement, Watsco noted this investment continues its strategy to partner with well-established businesses and represents an investment in the Western U.S. The company also said it has exclusive rights to purchase ownership interests from current shareholders that may elect to sell in the future.

Watsco reported record operating results for the fiscal year that ended Dec. 31, 2017. The company attributed this to its continued investment in technologies designed to make it easier to do business and to help customers grow their businesses more profitably. The digitization of Watsco’s marketplace via e-commerce through iOS/Android-enabled apps and websites with an in-depth database of product information made significant progress in 2017. Contractors are able to interact with Watsco 24/7 to find products, place orders, and obtain technical support, which has increased customer adoption.

Also, employees are empowered with better data, processes, and capabilities to serve their customers’ needs.

Johnstone Supply announced in May 2017 it had reached $2 billion in annual sales. Founded in 1953 and converted into a member-owned cooperative in 1981, its members currently operate 410 locations that are supported by six regional distribution centers. Members serve both urban and rural contractors with locations in 47 states across the U.S., Guam, and Canada. In addition to HVACR equipment, the company supplies repair and replacement parts for residential, commercial, refrigeration, and facilities maintenance contractors and carries OEM parts for nearly every major equipment brand. It also maintains an industry-leading website and mobile app and offers additional technology-based efficiency programs to provide contractors with time- and money-saving conveniences.

Locke Supply is a growing employee-owned distributor of plumbing, electrical, and HVAC products located in Oklahoma City. It was founded in 1955 by Don J. Locke and Wanda Locke, who opened the wholesale plumbing supply outlet in Bartlesville, Oklahoma. Today, the company has a 45-acre distribution center that supplies more than 165 stores in five states. In 2017, The Oklahoman named Locke Supply one of the top workplaces in the area. Locke Supply considers itself one of the most progressive supply houses in the Southwest.

Epting Distributors was founded in 1964 by Bill Epting as a small family-operated business serving heating and air conditioning contractors in the Columbia, South Carolina, area. Over the years, the company has grown to include 13 branch offices and 250 HVAC dealers throughout North Carolina, South Carolina, and Georgia. Epting offers Tempstar residential HVAC equipment, commercial and specialty products, and innovative marketing and training services.

S.G. Torrice was founded in 1958 in Wilmington, Massachusetts, by Samuel G. Torrice, who started the company with two employees in a small warehouse.

Stephen Torrice, president, is the son of the founder. The company is a multi-branch, full-service distributor of heating and cooling products.

Among all respondents, 69 percent of their businesses are residential and 31 percent are commercial, on average.

In the survey, respondents were asked what factors they expect to have the most impact on HVACR distribution in 2018. Their responses ran the gamut from the economy to government regulations to pricing and more.

Carlton Harwood, vice president of HVAC, Ferguson, said product availability and pricing, growth in e-commerce and omni-channel sales, an increase in ductless and variable refrigerant flow (VRF) sales, and a budding interest in connected home products are expected to have the greatest short-term impact.

“Strong U.S. employment and higher disposable incomes are expected to continue, which will lead to increased consumer spending, a stronger demand for home improvements, and increased housing starts,” he said. “The HVAC distribution industry will face the challenge of competing directly with HVAC manufacturers. Potential increases in interest rates may impact both construction activity as well as home affordability. The push for environmental sustainability will drive increased HVAC replacements and, in turn, will aid industry growth.”

“The personal tax cuts will help consumers — our ultimate customers — and the corporate tax cut will help us grow our business to meet this increased demand,” he said. “I am pleased that we are seeing a more business-friendly attitude, at least in some government circles.”

“It’s imperative to have expanded inventory, delivery capability, and tech support,” he said. “Education and training is also critical for both customers as well as employees with all the advancements in technology, smart controls, and changing regulations. The required knowledge goes beyond equipment sales and servicing, as it must also include a complete understanding of the business challenges HVACR companies face with their customers. This would include long-term versus short-term solutions, cash flow, financing, and emerging opportunities in the marketplace. As an industry, we must do more to make younger people with old-school perceptions of HVACR more aware of the careers and opportunities that exist. We have to help them see that we are now about electronics, computer sciences, and business entrepreneurs all while doing more than any other industry to make our food safer, the world greener, and people more comfortable.”

Tim Brooks, president, Lohmiller & Co., believes attaining and retaining labor will continue to be a challenge.

“The unemployment rate in our market is 2 percent,” he said. “Employees who want to work are already employed today. This is not a plug-and-play industry. Distributors that add value on a consistent basis will always have a place in this market. I do not see a drone delivering a furnace or rooftop unit that was purchased online for a homeowner or building owner to find the labor to install.”

Mike Muzny, executive vice president, Locke Supply, said economic growth potential per market as well as a substantial increase in cost of goods, at least for all metal products, will be impactful in the near future. He also predicts the phaseout of permanent split capacitor (PSC) motors will have a significant influence on pre-buys of air handlers and furnaces.

James Luce, owner/CEO, Luce, Schwab & Kase Inc., which ranked No. 56, is optimistic the recent tax cuts will enable businesses to continue spending and upgrading their facilities and put more money in consumers’ pockets throughout 2018. Also, the changes in Section 179 now allow for depreciation expensing for HVAC equipment to go from 39 years to one year. This will have a very positive impact by encouraging commercial building owners to invest in new equipment.

Jim Fabricatore, vice president, Dunphey & Assoc (Dasco Supply), No. 59, also has his eye on the steel tariffs, which he believes will continue to raise prices on everything the company sells; however, he is optimistic there’s enough commercial activity on the books to make 2018 and 2019 record-breaking years for the company.

Steve Bellar, president, Thrifty Supply, No. 63, is concerned about the lack of financial capital to support new construction.

Ben Curwin, corporate HVAC director, VP Supply Corp., No. 65, believes 2018 will likely further the trend of increasing the importance for distributors to have digital tools available to customers and an effective, engaged, and intentional sales force.

Not all of the Top 10 Distributors in our segmented list were in the overall Top 50.

WHAT PERCENT OF YOUR BUSINESS IS RESIDENTIAL

WHAT PERCENT OF YOUR BUSINESS IS COMMERCIAL