Some techs believe measuring is a waste of time

I often hear from HVAC companies and technicians that they simply don’t believe in measuring static pressure. They see it as a waste of time, another thing to do among the many tasks they must accomplish. If you have that viewpoint, this article is for you. Here are four reasons why you shouldn’t measure static pressure and should keep doing things the same way.

YOU LOVE TO GUESS

The first reason not to measure static pressure is because hooking up a refrigeration manifold to the system tells you everything you need to know. Don’t worry about the fact that this practice often leads to leaks, can introduce non-condensables, and can cause potential refrigerant contamination. 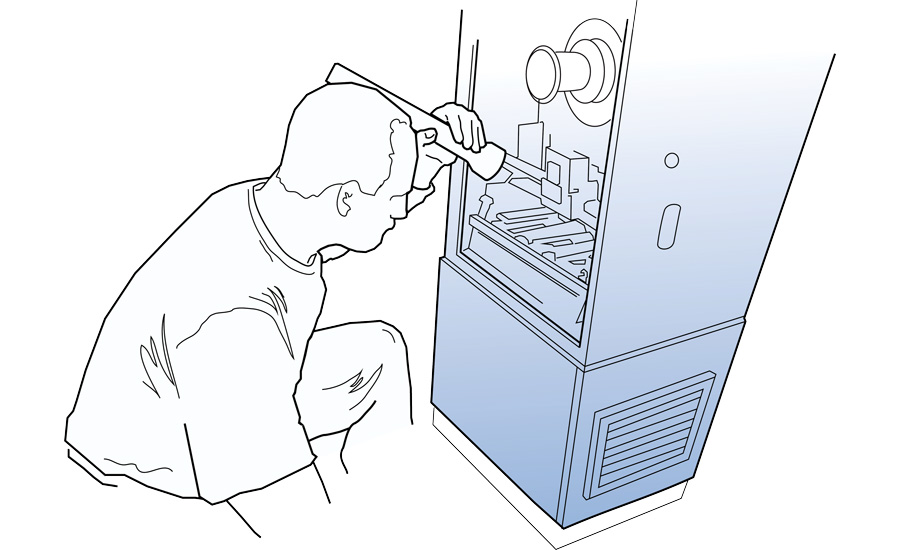 WASTE OF TIME: Is it really necessary to measure static pressure when you can just as easily perform a visual inspection?

Many of us have encountered systems operating in a floodback state. That requires measuring suction line pressures, converting that to saturation temperature, and finding it to be at the freezing point. A suction line temperature measurement quickly reveals no superheat. This is usually when guessing begins.

Guessing often leads to thermostatic expansion valve (TXV) replacements and other unnecessary repairs. Unfortunately, when you remove the “bad” part and install a new one, the new part continues to operate the same way. Instead of approaching troubleshooting as a process of elimination, it becomes an anxiety-filled guessing game to see what works. After all, we love to guess at the refrigerant charge.

Why measure static pressure when you can do a series of visual inspections and, based on that, know whether or not airflow is correct? If the blower is clean and set to high speed, the coil and filter are clean, and it’s “blowing good” according to your five-digit airflow meter (your hand) — airflow must be great.

If these components check out, it’s time to grab a tape measure and a notepad to record the duct sizes. Once the ducts are measured, you check them with a duct calculator at a .10-inch friction rate to see if they are sized correctly.

It takes roughly an hour to perform all these visual inspections. Why waste your time measuring static pressure? After all, it would take less than five minutes to find an airflow problem using that information.

The next reason not to measure static pressure is because excessive callbacks and warranty costs are the nature of the business. Static pressure testing won’t help with that.

Remember, nothing creates a longer-lasting positive impact with a customer than their brand-new system continually having problems. It’s the ultimate way to build credibility and trust, since you’re constantly at their home repairing or adjusting their equipment.

After all, angry customers spread the word about how well your systems perform better than anyone. Tales of your systems and continual visits will be spread across social media platforms at an exponential rate. There’s no way static pressure can help you identify and prevent issues caused by low airflow and undersized ducts.

Consider this: You’ll also get a lot of practice replacing parts. Often, it’s the same ones over and over again. We all know that defective parts are common, so there’s no need to measure static pressure to identify how or why the part failed in the first place.

The last reason I have for not measuring static pressure is because your systems are awesome the way they are. You’ve been doing it the same way for 30 years, and there’s no need to change now.

Business as usual is how you prefer to operate. That means swapping out equipment and not looking at what it’s attached to. Getting stuck with an existing duct system isn’t that bad, you might say.

It’s OK to miss opportunities to better serve your customers — you already have plenty to do anyway. It’s best to leave defects hidden, so you can offer the lowest price and gain an edge over the competition. Working in the blistering heat and freezing cold for little to no profit is just how this industry works.

MY ‘AHA’ MOMENT: THE COUNTY LIBRARY

It doesn’t have to be like this. For me, the scary part about these reasons is that I have made and lived with each one of them. We get stuck in our comfort zone, as crappy as it may be, and are unwilling to change.

We had problems for several years on a 5-ton system at a local library we serviced. The indoor coil and filter were clean. The duct system was designed by an engineering firm, installed by a mechanical contractor, and tested and balanced years ago.

During long run cycles, the indoor coil would freeze intermittently. Needless to say, this system drove us nuts. It wasn’t until I learned how to measure static pressure and plot fan airflow that I had my “aha” moment and figured out what had been eluding us.

Equipped with this new knowledge, we measured total external static pressure (TESP) and plotted fan airflow on the manufacturer’s fan table. We found a system rated to deliver 2,000 cfm at a maximum rated TESP of .50 inches w.c. (water column) that was actually running over 1.0 inches w.c. and delivering less than 1,500 cfm. I was blown away but excited because I finally had answers.

After digging a little deeper, we found a closed fire damper on one trunk that drove the supply duct static up. This led to the increased TESP, reduced airflow, and intermittent freezing on hotter days. In other words, during short run times, the system would run and shut off, allowing the coil to unthaw between off cycles. On hotter days, the coil would freeze during extended run times.

When we questioned the library staff, they said that one end of the building was always warmer than the rest but assumed that’s just how it was. Once the fusible link was replaced in the fire damper assembly, they finally got the airflow and comfort they had forgotten about.

TIME FOR THE SARCASM TO END

Hopefully you know that this article is written with tongue firmly in cheek. In all fairness and fun, you can see I’ve made all these excuses and mistakes myself. I didn’t know any better and did the best I could with the resources and knowledge I had. In some cases, that meant using a refrigeration manifold, a visual inspection, a tape measure, and a duct calculator. While all these are essential to what we do, something was missing, and I was guessing to fill the void.

The good news is, you don’t have to guess. Static pressure testing gives you the clues you need to solve a lot of the headaches you encounter daily. I likely wouldn’t have solved the problem at the library if I hadn’t measured static pressure. I had tried everything else for years but always came up short and frustrated.

Some people are stuck in their ways and will refuse to improve. As the saying goes, you can’t teach an old dog new tricks. Beer-can cold has worked for years for many techs. No matter what new information they are presented with, they won’t change unless they see the value in making their job easier and quicker. If it looks like one more thing to do, you’ll never get anyone to measure.

They must understand why measuring static pressure is important. For me, faster, simpler, and more accurate troubleshooting that allowed me to find hidden problems was my “why.” I later found how static pressure helped increase our sales, as we offered solutions to relieve excessive static pressure and improve system airflow.

Sometimes we’re gluttons for punishment and will use any excuse to get out of an extra task, even if that task makes life easier. I’ve heard my share of excuses why you shouldn’t measure static pressure, but I’m sure there are more. Please share them with me when you hear them. Remember, excuses only satisfy the people who make them.