Technicians must understand how to calculate temperature glide for refrigerant blends

The HVACR industry is in the process of researching new low-GWP refrigerants and refrigerant blends that can be incorporated into refrigeration and air conditioning systems. ASHRAE Standard 34 classifies some of these new refrigerant blends as A2L, meaning they are lower flammability with lower toxicity (see Table 1). 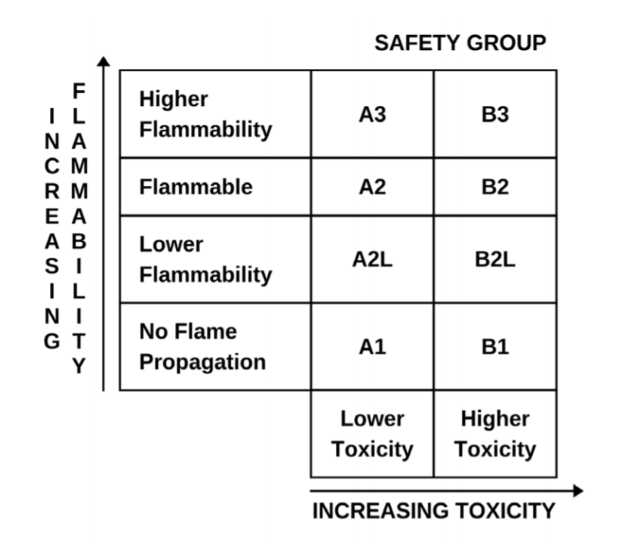 Some refrigerant blends exhibit temperature glide, because there is more than one molecule present in their blend makeup. As these refrigerant blends phase change (evaporate and condense), there is a change in their composition by preferential evaporation or condensation of the more or less volatile component in the blend. This process is referred to as blend fractionation.

Refrigerant blends can have two, three, four, or more refrigerants making up the composition of the blend. For example:

Refrigerant blends that do not exhibit temperature glide, or their temperature glides are negligible, are referred to as azeotropic blends and are represented by the 500 Series blends, such as R-500, R-502, and R-507.

Often, refrigerant blends exhibit a small amount of temperature glide when they phase change, and these are referred to as near-azeotropic refrigerant blends. Examples of these blends are R-410A, R-404A, as well as many others.

The following given conditions are for a summer air conditioning application:

Since subcooling refers to a liquid and is defined as any sensible heat lost after the saturated liquid point in the condenser, the condenser subcooling would be 11°F (85°F – 74°F), where 74°F is the condenser outlet temperature and 85°F is the saturated liquid (bubble point) temperature corresponding to the 180 psig head (condensing) pressure. As mentioned earlier, the P/T chart in Table 2 instructs the service technician to use bubble point values when determining subcooling.

System design, performance, and service conditions must be evaluated when incorporating or retrofitting with a zeotropic or near-azeotropic refrigerant blend. When HVACR service technicians are calculating subcooling values, they must use the bubble point values from the pressure/temperature chart, and when calculating superheat values, they must always use the dew point values from the chart. The average evaporator temperature occurs at the midpoint of the effective temperature glide. Always follow the manufacturer’s guidelines before retrofitting with any refrigerant, or system performance could be affected and injury may occur.