The HVACR industry will likely soon be in the midst of another refrigerant change, which is causing a bit of unease amongst some. That’s because this time around, unlike the transition away from R-22 in 2010, some of the new refrigerants being proposed to replace R-410A in air conditioning equipment are mildly flammable — or, as ASHRAE classifies them, lower flammability (A2L) refrigerants.

The reason for this transition is different from the last, which concerned phasing out ozone-depleting refrigerants such as R-22. They were replaced with HFCs such as R-410A, which did not pose any harm to the ozone layer but are thought to contribute to global warming. Countries around the world responded by signing on to the Kigali Amendment to phase down the use of high-GWP refrigerants such as R-410A; however, finding a nonflammable, low-GWP replacement proved to be difficult.

The U.S. has not yet ratified the Kigali Amendment, and coordinated federal regulations to reduce the use of HFCs were delayed due to litigation, but states such as California pushed ahead and passed their own laws implementing an aggressive phase down schedule. As a result, there is a proposed GWP limit of 750 for all new stationary air conditioning systems (residential and commercial) in California starting Jan. 1, 2023 (although the state is considering moving the date to 2025), and OEMs have been working diligently to find compliant refrigerants.

Ultimately, the A2L refrigerants R-454B and R-32 have been chosen by several OEMs to replace R-410A, causing some HVACR contractors to ask: What does mildly flammable — or lower flammability — actually mean?

Refrigerants are classified based on their flammability and toxicity, and they are governed by ASHRAE Standard 34, Designation and Safety Classification of Refrigerants, which offers a simple way of referring to common refrigerants in place of chemical names, formulas, or trade names. In the U.S., residential and light commercial air conditioning equipment has almost universally used refrigerants that do not propagate a flame (A1), such as R-22 or R-410A.

According to ASHRAE, “Standard 34 assigns an identifying reference letter and number to each refrigerant to classify it according to the hazard involved in its use. The capital letter designates a toxicity class based on allowable exposure. The numeral denotes flammability. For example, Standard 34 defines two safety classifications for toxicity: class A denotes refrigerants of lower toxicity, and class B denotes refrigerants of higher toxicity.” (See Table 1.) 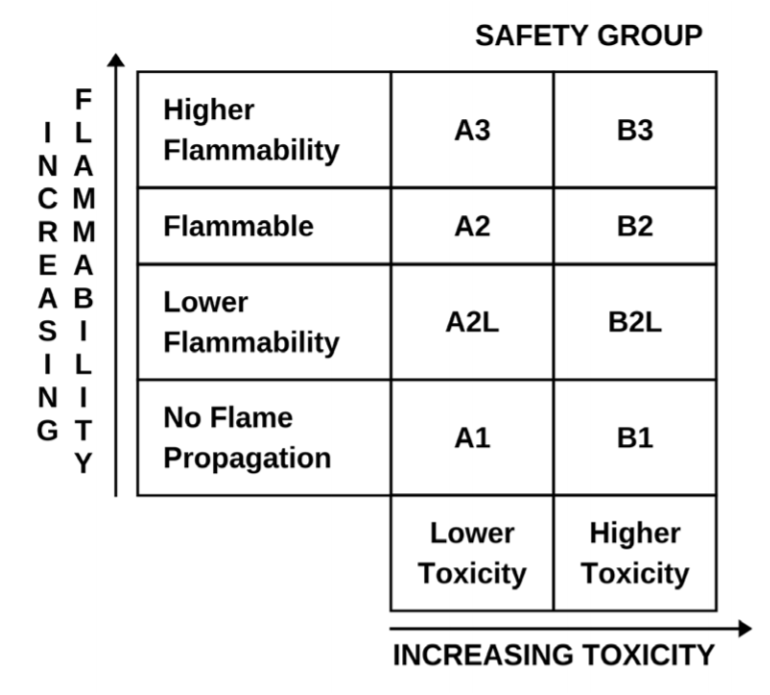 According to Arkema, which manufactures R-32, A2L refrigerants often have a reduced number of fluorine atoms – which helps them achieve lower GWP — but they may have a higher amount of hydrogen atoms, which makes them flammable under the right conditions. But igniting A2L refrigerants is difficult and requires certain conditions to be met.

Indeed, AHRI research shows that it takes three failures in a system to ignite an A2L refrigerant used in air conditioning equipment, which are as follows:

The safety standard, UL 60335-2-40, also ensures that air conditioning units containing A2L refrigerants must have various protections in place to ensure safe operation. For example, refrigerant leak detectors that sense loss of pressure will be required for all systems in the occupied space exceeding a prescribed refrigerant charge limit. Furthermore, UL states that, “Refrigerant leak detection systems are required to have both sensors and control logic electronics that activate the evaporator fan and use circulated air to quickly disperse and dilute refrigerant in the event of a leak. This is intended to prevent the formation of refrigerant concentrations.”

This is different from the older room sensors used with the A1 refrigerants, which were referred to as passive room sensors, said Jason Obrzut, director of industry standards and relations at ESCO Institute.

“These sensors simply sounded an alarm to alert occupants to the presence of a refrigerant leak,” he said. “Standards now call for an active sensor, which not only sounds an alarm, but can also activate mechanical ventilation, activate a solenoid to force the system into a pump down, de-energize the system completely, or a combination of mitigation responses using control logic electronics.”

In addition, the UL standard requires A2L equipment to have self-test protocols, which must run every hour to ensure proper operation and function. In the event of detector failure, the standard requires circulation fans to activate and maintain a required airflow to prevent flammable concentrations from forming.

Even with these protections in place, some are worried about the safety of contractors and technicians who will be handling mildly flammable refrigerants in the field. ACCA is particularly concerned that there will not be enough time to properly train contractors and technicians to safely handle A2L refrigerants before the equipment becomes available. In comments submitted to the Environmental Protection Agency (EPA) earlier this year, Chris Czarnecki, government relations representative at ACCA, noted that Washington State will be allowing the use of A2Ls as of February 2021 and that California may not be too far behind. 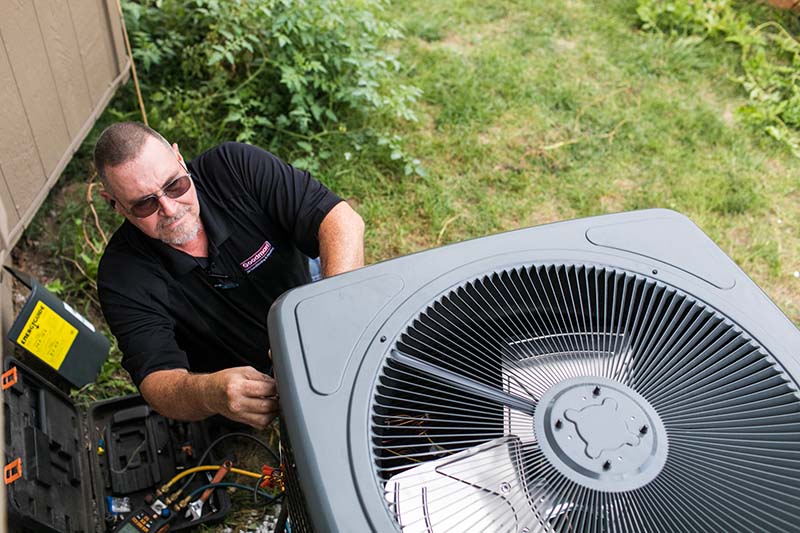 REFRIGERANT TRANSITION: OEMs such as Goodman and Daikin Applied have announced their transition from R-410A to the mildly flammable (A2L) refrigerant, R-32, in many of their comfort cooling products.

“The HVACR industry is already plagued with contractors who take shortcuts to underbid legitimate contractors and businesses that do adhere to relevant rules and regulations to ensure the safety of both workers and homeowners,” he said. “As it stands, this is a severe problem, but the significant change is that if shortcuts are taken with flammable products the consequences will potentially be deadly. Property and lives can be lost without proper training and safety precautions. This is a reality that is on the horizon if regulations for the training, education, and handling of flammable refrigerants are not implemented in the immediate future.”

“These are products that require specific knowledge and expertise to use safely,” he said. “Under no circumstances should the handling of flammable refrigerants be allowed by individuals who are not qualified to do so.”

Training will be available from many organizations, and it will be up to the industry to embrace and require stakeholders to participate, said Obrzut. He noted that ESCO has been involved in numerous committees and groups dealing with the safe use of A2L refrigerants, including what a safe transition to A2L refrigerants should look like.

“We have had a training program under development for almost a year, and it will consist of a training manual, instructor resources, and a closed book certification exam on par with the rigorous safety standards that the HVACR industry has come to embrace,” he said. “The training material will also be available in an online format on our e-learning site.”

Joseph Martinko, business director of Americas at Chemours, noted that the industry has a strong history of ensuring technicians are trained prior to a product line transition.

“We are confident a collaborative industry effort will ensure a safe transition to A2Ls,” he said. “Technicians will need to understand that while an A2L such as R-454B is not a highly flammable refrigerant like R-290 (propane), there are key aspects to understand, for example: disposable cylinders will have a resettable relief valve, some tools will need to be deemed acceptable for A2L use, and A2L refrigerants will not be drop-in replacements in systems designed for another safety classification.”

That said, contractors should realize that A2Ls have been safely used in numerous applications for many years. At least half of packaged window air conditioners in the U.S. are already using R-32, and more than 100 million R-32 units are already being used in over 90 countries by more than 40 manufacturers, mostly in residential splits but also in rooftops, VRF, and air-cooled chillers, and there have been no issues, said Philip Johnston, PEng, general manager/low-GWP program leader at Daikin Applied Americas Inc.

“R-32 is roughly 100 times more difficult to ignite than propane, and HVAC technicians routinely handle natural gas, propane, acetylene, and other materials that are considered to be more concerning than mildly flammable refrigerants,” he said. “As long as the technicians understand safety features and warnings, and train adequately, the likelihood of problems is greatly reduced.”

It is also important to remember that when the industry transitioned away from R-22, many technicians were worried about the 50 percent increase in operating pressures of R-410A. However, through industry-wide efforts, training, awareness, and best practices, these concerns were overcome very effectively, said Johnston.

“Many safety features, warnings, and training will be put into place to reduce the likelihood of problems with A2L refrigerants,” he said. “Follow the road signs and directions and be smart. Do that, and everything will be okay.”

New guidelines and regulations have been placed on packaging, shipping, handling, and warehousing of flammable refrigerants, and building codes for each state are adapting regulations to ensure safe practices for storing and using A2L refrigerants.

Arkema Inc. states that it only fills R-32 in DOT-4BA cylinders, which are refillable, and the company shared some of the guidelines and regulations put in place specific to flammable refrigerants contained in DOT-39 and DOT-4BA/W cylinders: