Preparing the Workforce for A2L Refrigerants

As a result of the pandemic, HVAC Excellence held its 2021 National HVACR Educators and Trainers Conference online, and more than 1,000 individuals signed up to attend one or more of the 130 virtual sessions. The annual train-the-trainer event is designed for anyone involved in the training of current or future HVACR professionals, and this year’s program covered just about every aspect of the industry, from best practices to emerging technologies to new refrigerants and their accompanying regulations.

The topic of new refrigerants was of particular interest, given the impending phasedown of HFC refrigerants such as R-410A. Many of the new low-GWP refrigerants designed to take the place of their high-GWP predecessors are mildly flammable (A2L), and there are many questions surrounding the safe use of these types of refrigerants. Several sessions focused on these issues, and presenters offered common-sense guidelines to allay fears about the upcoming transition.

In a session on mechanical codes, Craig Grider, assistant chief engineer for Intertek, discussed the rigorous testing process that HVACR equipment — including that which will utilize A2L refrigerants — must undergo before it is approved to sell in the marketplace.

“Safety certification is a formal confirmation that a product or service meets all the requirements for both external and internal standards,” he said. “Appliances must also meet all applicable code requirements for safety before certification can be granted. A product bearing a listing mark from Intertek, ETL, or UL and CSA has been tested to meet at least the minimum requirements of U.S. or Canadian electrical safety requirements.”

As far as A2L equipment is concerned, the codes will stipulate charge limits through UL standard 60335-2-40 for HVAC equipment or 60335-2-89 for refrigeration equipment. For A2L refrigerants in HVAC equipment, the charge limitations are 260 times the lower flammability limit (LFL) rating of the refrigerant. (LFL simply means how much of the gas needs to be present in the air before the flammable mixture could ignite.) In commercial refrigeration, the LFL varies depending on the type of equipment, as well as where it is installed.

“When we're testing and certifying appliances that utilize a flammable refrigerant classified as A2, A3, or A2L, our tests identify any potential ignition points,” said Grider. “So if a leak occurred, these are components or potential ignition sources within the appliance. We test those to make sure they are mitigating against the ignition. We also conduct simulated leak tests at all of those ignition points to verify that those are not going to be a high risk source for ignition.”

Grider explained that an additional simulated leak test is performed within the appliance to ensure the refrigerant detection system operates as intended. This means making sure the system detects and takes the appropriate mitigation measures, including shutting down the appliance, turning on circulation, airflow, etc., in order to comply with the standard. Vibration testing is also performed on the appliance to measure for vibration inherent within the system when it is running, which could lead to cracking or leakage.

As can be seen, the testing of A2L equipment is rigorous in order to ensure it meets all safety standards. As Doug Starasinic, P.E., senior application engineer for Honeywell Refrigerants, noted, “Mechanical codes and safety standards are being adapted to allow the use of mildly flammable A2L refrigerants, but it’s going to take some time for these to get into the marketplace.”

Once A2L refrigerants arrive in the marketplace, it is incumbent upon all HVACR professionals to receive training on their proper handling and use. In a live discussion on new refrigerants, Dr. Chuck Allgood, refrigerants technology leader at Chemours, gave an overview of the new mildly flammable refrigerants. 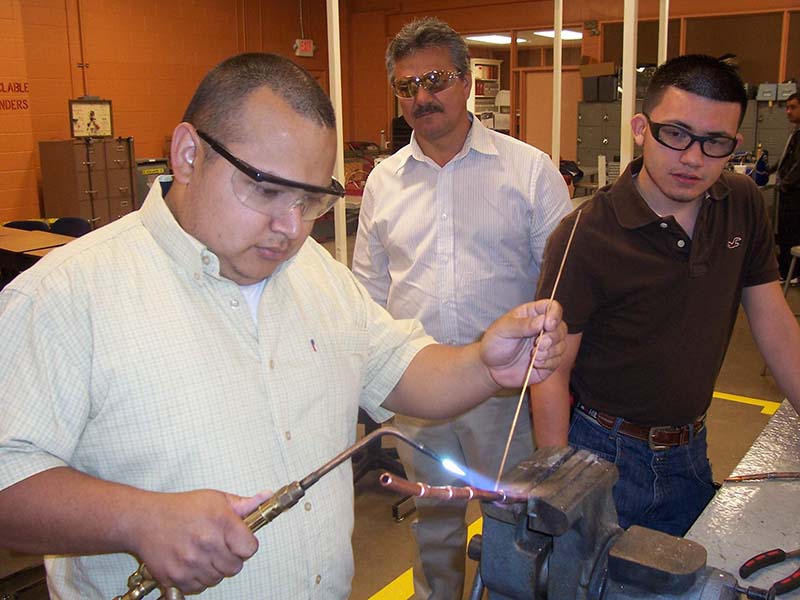 BEST PRACTICES: When working with A2Ls, it is a good idea to return to best practices, such as performing a proper recovery before brazing. (Courtesy of ESCO Group)

“Refrigerants like R-454B and R-32 are probably the leading candidates to replace R-410A,” he said. “As A2Ls, we have to treat them appropriately, because they are flammable per the definition, but they're a lot more like the class one nonflammables than they are the very flammable ones. They have low burning velocity, they're very difficult to ignite, and the LFLs and the flammable range are pretty small.”

Most of the common tools used with A1 refrigerants such as R-410A can also be used with A2L refrigerants, said Allgood. With the exception of recovery machines, which must be rated for A2Ls.

“I think what’s important for the technician workforce to understand is that A2Ls are only going to be in new equipment, so no retrofits will be going on. We're not going to put A2Ls into equipment designed for A1 refrigerant — that's a big no-no,” he said. “It's going to be new equipment coming out from the OEMs, and they will have instructions on how to install it.”

But it will be necessary to obtain some formal training on A2Ls and to also return to best practices when installing or servicing these units.

“Before you do any brazing, perform a good recovery, evacuation, and nitrogen purging — things technicians should probably be doing anyway, but it's even more important when a mildly flammable refrigerant is in the system,” said Allgood. “Things like ventilation and securing your area, labeling — all things that are pretty straightforward good practices. Maybe people took some shortcuts in the past, but we certainly don't want to do that. I think everybody needs to rededicate themselves to safely handling these products going forward. They are coming. I don't think we're going to avoid them.”

Allgood pointed out that A2Ls are actually already in use, as the automotive sector has transitioned from R-134a to R-1234yf over the last five to eight years. In addition, R-32 is available in a number of small charge systems, including PTAC units and window air conditioners.

Near the end of the session, an attendee mentioned the previous transition from R-22 to R-410A, noting that at the time, it was implied that it would be the last transition. “Will another change be coming soon?” he asked.

“Nothing is forever, I would say,” said Allgood. “Things do change. I think we're getting ready to have another transition here, beyond R-410A to R- 32 and R-454B. But I don't think there'll be another one soon after that. It's going to more around system design, being smart. We're reducing charge sizes, we're reducing leak rates, good service and maintenance are always important. I think there will continue to be innovations, particularly around controls, more sophisticated systems, smart systems, really driving towards energy efficiency. Energy is becoming more and more of the story, and that’s where I think the focus will be on in the coming decades.”