When Congress passed the AIM Act in December 2020, the Environmental Protection Agency (EPA) was tasked with creating the rules necessary to phase down the use of HFCs in the U.S. As part of this rulemaking process, EPA has been meeting regularly with industry stakeholders, including manufacturers, trade associations, and environmental groups, to ask for their input and expertise in crafting the new regulations.

The most recent workshop addressed subsection (i) of the AIM Act, entitled “Technology Transitions,” which provides EPA with the authority to restrict the use of regulated HFCs in sectors or subsectors where they are used. This meeting focused on the refrigeration and air conditioning sectors, and industry stakeholders weighed in with what they would like to see EPA include in the final rulemaking.

Under subsection (i) of the AIM Act, anyone could petition EPA to create a rule for the use restriction of an HFC in a sector or subsector, and numerous entities did just that. In October 2021, EPA granted 10 of those petitions and partially granted one petition. Granting or partially granting a petition means that EPA intends to address the requests raised in the petition in a future rulemaking; it does not mean the Agency will propose or finalize requirements identical to those requested in the petition.

The petitions granted under subsection (i) came from HVACR manufacturers, trade associations, and environmental groups, who, among other things, asked EPA to ban the use of R-410A in new residential and commercial air conditioning equipment starting January 1, 2025. On the commercial refrigeration side, one of the granted petitions called for following California’s 150-GWP limit for new or remodeled facilities that utilize equipment containing more than 50 pounds of refrigerant, starting on January 1, 2023.

A number of the petitions requested EPA to enact restrictions that were identical or similar to HFC restrictions under the Significant New Alternatives Policy (SNAP) program that were partially vacated by the D.C. Circuit Court of Appeals and remanded to EPA, said Bella Maranion, chief of the alternatives and emissions reduction branch at EPA. Other petitions requested EPA go further than what was in those SNAP rules by lowering GWP limits or adding HFC uses that weren't covered under those SNAP regulations.

“We plan to address the petitions in a single rulemaking for the reason that many cover the same or similar uses, and the deadline for acting on the granted petitions is the same, October 7, 2023,” said Maranion. “We proposed establishing some of the framework elements for implementing subsection (i), and the timeline is to propose later this year, allowing for a public comment period and finalizing the rule next year.”

Date of manufacture works exceptionally well for OEMs, because it gives us a hard cutoff date for producing equipment.
John Hurst
Vice president of government affairs and communications,
Lennox International

Before the latest meeting, EPA sent stakeholders a list of questions they wanted to discuss (see sidebar). Much of the discussion revolved around one particular question, which asked whether regulations should use the date of manufacture, sale, or distribution, and/or entry into commerce or import of products and equipment. Respondents overwhelmingly favored using the date of manufacture in the final regulation, which typically means that equipment manufactured prior to a specific date is allowed to be sold until the inventory is depleted. 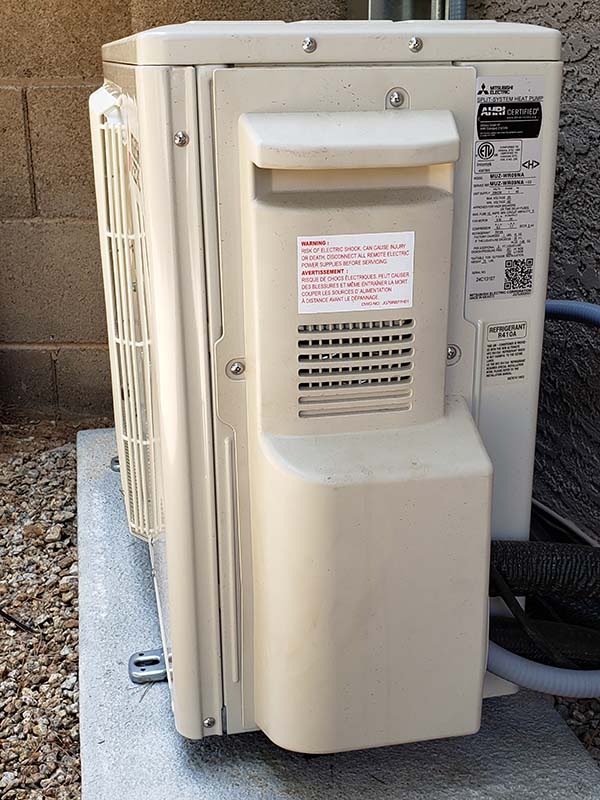 EQUIPMENT LABELS: EPA asked for input as to whether equipment labels should specify the type of HFC used, as well as its GWP. (Staff photo)

John Hurst, vice president of government affairs and communications at Lennox International, commented that “date of manufacture works exceptionally well for OEMs, because it gives us a hard cutoff date for producing equipment. A date of installation becomes very difficult for manufacturers to manage. That said, many of us will most likely make a transition prior to January 1, 2025.”

Kelley Raymond, director of sustainability and environmental advocacy at Daikin U.S., was also a proponent of the date-of-manufacture requirement, noting that this arrangement would be most helpful for distributors.

“Distributors have a very cyclical business, and it can be very difficult if dates aren't tied to manufacture for them to really ensure that they’re properly meeting the dates that [EPA] sets,” said Raymond. “Most of us will transition beforehand — we're not switching lines over on the date that [EPA] provides, we're doing it perhaps even months in advance. But we can't control how long [the product] might sit on shelves in a distribution warehouse. And these are small businesses, so there is a financial impact for them if they have stranded equipment they can't sell because of a date. So I do think that date of manufacture is pretty important, and I want to make sure that the small business impact is being kept in the back of your mind.”

HARDI is also very much in support of the date-of-manufacture provision for factory-charged equipment, said Alex Ayers, director of government affairs at HARDI, because it is the easiest method of compliance.

“Distributors want to know that the product is going to be available to be sold, no matter when they sell it,” said Ayers. “Generally speaking, we are very seasonal, but occasionally a piece of equipment could last into the next season, just because there was not enough sales. Because our product is so based on consumer demand, something could sit in a warehouse for a year, so it's better for us for it not to expire on a shelf.”

With field-charged equipment, Ayers said that the best method would be for the information nameplate on the equipment to state its allowable refrigerant(s) and that the information stay true all the way through to installation. If this product were to expire in a warehouse, where a contractor may not know that a certain refrigerant can no longer be used with that particular compressor, it would be very difficult to ensure compliance, he said.

Date of manufacture is important, agreed Chris Forth, vice president of regulatory, codes and environmental affairs at Johnson Controls, who added that there might need to be further discussion on the actual definition of date of manufacture, particularly as it relates to built-up systems. However, he voiced another concern about the current state of building codes around the country, many of which have not been updated to allow the use of A2L refrigerants in comfort cooling equipment.

“We're all working diligently to get the building codes updated, and like others, we're going to be launching some of our [A2L] stationary equipment in 2024, ahead of the petition for stationary equipment,” he said. “But I want to ask EPA if they have anything in their toolbox should there be cases where the building codes do not get updated before the prohibitions go into effect.”

The answer is essentially no, as building codes are regulated at different levels, including local, state, and federal, said Cindy Newberg, director of the stratospheric protection division at EPA.

“We've never felt like we needed to have every single building code updated ahead of the long-term trajectory of where things may go, and I don't know that we feel differently here,” she said. “We see some building codes changing, and we understand there may be some places where they haven't been. We're not in the position of looking at every individual locality and knowing exactly what every requirement is there. Our hope is that anything we're looking at, there's a couple different options, so we’re not locking someone into one technology or one specific refrigerant.”

The industry is moving quickly to help update building codes around the country and great headway has already been made, said Helen Walter-Terrinoni, vice president of regulatory Affairs at AHRI. She noted that the association still stands by the GWP limits that it proposed for air conditioning and commercial refrigeration equipment in the petitions submitted to EPA.

“I will say that on the refrigeration side, because the safety standard was only done last year, we are further behind on that, but we're certainly working as hard as we can to move that forward,” she said. “We are ticking the boxes as fast as we can, and we're working hard to get states across the finish line.”

Visit www.epa.gov/climate-hfcs-reduction for more information on the HFC phasedown, as well as when EPA plans to hold future rulemaking workshops on the AIM Act.

In its latest workshop, EPA asked industry stakeholders for their input and expertise in the following areas: