Equipment containing the new refrigerant is now available in four states, with more to come

The federal AIM Act, which will phase down HFC refrigerants 85% by 2036, was designed to encourage a safe transition to lower-GWP refrigerants such as R-32 and R-454B in comfort cooling equipment. However, these alternatives to R-410A are mildly flammable (A2L) and thus require updated building codes and standards to ensure their safe use.

The applicable safety standards from ASHRAE and UL have been updated, but most state building codes do not currently allow the installation of stationary comfort cooling equipment that contains A2Ls. There are several exceptions, including Florida, Oregon, North Carolina, and Washington. These states have already updated their building codes to allow the use of A2L refrigerants in larger air conditioners and heat pumps, and several more states are looking to do the same — possibly later this year.

The reason why some states are adopting A2Ls and others are not is that in the U.S., there are several building codes available, including the International Code Council (ICC) and the International Association of Plumbing and Mechanical Officials (IAPMO), and states typically adopt one or the other. The ICC has already updated its standards for the use of A2L refrigerants [in the 2024 edition], while the IAPMO has yet to finalize theirs, said Chris Forth, vice president of regulatory, codes and environmental affairs - ducted systems at Johnson Controls.

“Most states follow ICC guidelines and are, therefore, free to adopt those standards at any time,” he said. “However, there are some states — notably California — that follow the IAPMO, and they are at risk of not having their codes updated by 2025.”

That 2025 date is important, because as part of the rulemaking process for the AIM Act, the Environmental Protection Agency (EPA) is considering banning the use of R-410A in new residential and commercial air conditioning equipment starting January 1, 2025. That date aligns with California’s HFC phasedown regulations, which require a 750 GWP limit for new air conditioning equipment starting in 2025, while VRF system manufacturers have until 2026 in order to comply with the new limit. 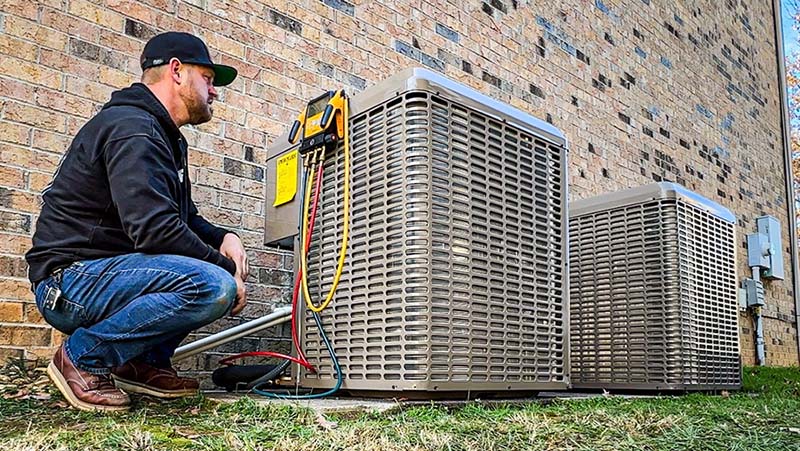 “Model codes are just that — a model, or template that may be used by the states to help form their codes,” he said. “States may adopt a model code verbatim as their own state code or modify it to better suit their individual state needs. Additionally, states often have their own specific climate objective needs. Therefore, it’s critical that individual states have the flexibility to make changes to their own codes on a schedule that works for them. Some states have elected to make updates to their codes early on, in advance of the model codes, to allow for the use of lower-GWP refrigerants. Other states are following suit with their codes.”

It is also important to note that each state approaches the code-making process differently. Most states have a statewide code process that includes proposing amendments to the code. The proposed changes then go through an administrative process and, if approved, result in changes to the state code, said Dave Calabrese, senior vice president of government affairs at Daikin U.S. Corp. Then there are states like Illinois and Texas, which do not have a statewide code.

“When there isn’t a statewide code, the easiest solution is a legislative change guaranteeing the acceptance of A2L refrigerants approved by U.S. EPA SNAP throughout the state,” he said.

Calabrese noted that besides Washington, Oregon, North Carolina, and Florida, many other states have either changed the state code or state requirements that will allow the use of listed A2L refrigeration systems. These include Utah, Texas, Indiana, Ohio, New Jersey, South Carolina, and Alabama, and there are many other states with code change proposals pending, he said.

Much of the language used for code change proposals that enable the use of A2Ls in comfort cooling is similar from state to state.
Stephen Spletzer
Principal engineer of Opteon refrigerants, Chemours

While each state may approach the code-making process differently, it is expected that their final code language will be fairly similar to one another. But, of course, there may be some differences that contractors need to pay attention to, particularly those who service a multistate area.

“Much of the language used for code change proposals that enable the use of A2Ls in comfort cooling is similar from state to state, and often centers around the latest editions of the ASHRAE 15 and UL 60335-2-40 safety standards,” said Spletzer. “However, as individual states use different editions of the model codes as the basis for their state codes, additional language may be required for states using older versions of the mechanical and residential codes to help keep them current with the latest industry changes. Ultimately, while language may differ from state to state, the end goal of these code proposals is to bring them into alignment with the safety standards.”

Forth added that AHRI has been advocating for consistent language and uniform regulation across North America as well as in Canada and abroad, as this will not only help make the refrigerant transition easier, but also create greater market certainty for all stakeholders in the supply channel. But he noted that because states have the authority to enhance any building codes they may choose to adopt, there may be unique requirements for a given state.

“While the provisions enabling A2Ls in the state codes thus far are largely similar, there are often unique requirements regarding labeling, recordkeeping, etc., which we are seeking to avoid,” said Forth. “What’s most important is that these state codes all reference the same UL and ASHRAE safety standards without significant modification. These safety standards list all the provisions needed for the increased use of A2L refrigerant quantities for residential and commercial applications, and states may enhance or modify these requirements, which is where the challenge lies. It’s important that distributors and contractors understand their specific state code requirements as it applies to A2Ls.”

Most states are working actively to update their building codes, said Robert Glass, manager of state regulatory affairs at Daikin Comfort Technologies. He noted that stakeholders, including the HVAC industry, have been moving the process along by submitting code-amendment proposals to state building code committees and proposing legislative language. Between these approaches, he said that it is expected that most — if not all — states will be ready for a national transition.

And that’s the goal, said Forth — for every state to have updated their codes and standards by January 1, 2025. Otherwise, stationary units using A2Ls will not be legal to install in those states whose codes have not been updated.

“Currently, about one-third of U.S. states have updated their codes to allow for increased quantities of A2L refrigerants, and AHRI believes the vast majority will have their building codes updated by the January 1, 2025 deadline,” he said. “While not officially finalized by EPA, we believe this transition to be a ‘date of manufacturing’ rule, which means products built prior to December 31, 2024 can be sold and installed on and after January 1, 2025. Thus, there will be some limited amount of inventory to sell through that will allow for some additional amount of time for states to update their codes assuming, of course, that existing supply chain constraints are resolved.”

With more and more states allowing the use of A2L refrigerants in stationary equipment, contractors would be smart to learn how to install and service these new units sooner rather than later. They will also need to purchase A2L-compatible tools, such as manifold gauges, recovery machines, and vacuum pumps. 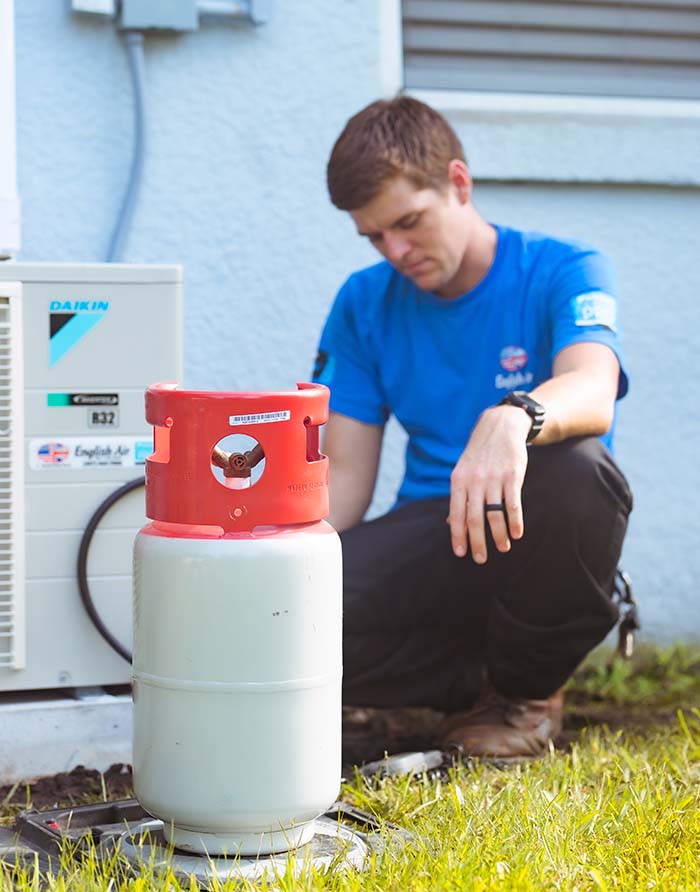 A2L TRAINING: A2L training programs are offered through various national organizations, and there are options for contractors to take them in person or online. (Courtesy of Daikin Comfort Technologies)

“More contractors are becoming aware of this transition, particularly since the implementation of the HFC phasedown and given the fact that A2L-certified products are now entering the market,” said Spletzer. “Education is key, and there are many resources available to contractors and technicians, such as refrigerant manufacturers, OEMs, and industry associations. Expect these efforts to ramp up in areas where state codes are updated and new products are introduced into the market.”

Even though many contractors have some awareness of the pending refrigerant change, very little has been done in regards to actual preparation, said Forth. One reason is that the Department of Energy (DOE) has also mandated new energy conservation standards (SEER2, EER2, HSPF2), as well as new test procedures that go into effect on January 1, 2023.

“Many contractors aren’t looking at the DOE January 1, 2023 deadline as their immediate concern but rather, their attention has been quite understandably focused on the stubbornly persistent supply chain disruptions and manpower challenges that began in 2020 and are currently ongoing,” he said. “But in less than two years after those new standards are in place, those same products will need to be converted to a different low-GWP refrigerant. It’s a major undertaking for the industry, and we need to be thinking about the big picture in terms of changes that are coming, not just what’s happening in 2023.”