Last December, Congress passed the American Innovation and Manufacturing (AIM) Act, which gave the Environmental Protection Agency (EPA) the authority to phase down HFCs to 15% of their baseline levels by 2036. Ever since then, the HVACR industry has been waiting anxiously to find out how EPA planned to implement the legislation.

Right on schedule, on September 23, EPA delivered its final rule, which established the HFC production and consumption baselines from which reductions must be made, codified the phasedown schedule (see Figure 1), and established an initial methodology for issuing allowances for 2022 and 2023. The rule also outlined how it planned to ensure compliance with the phasedown limits. 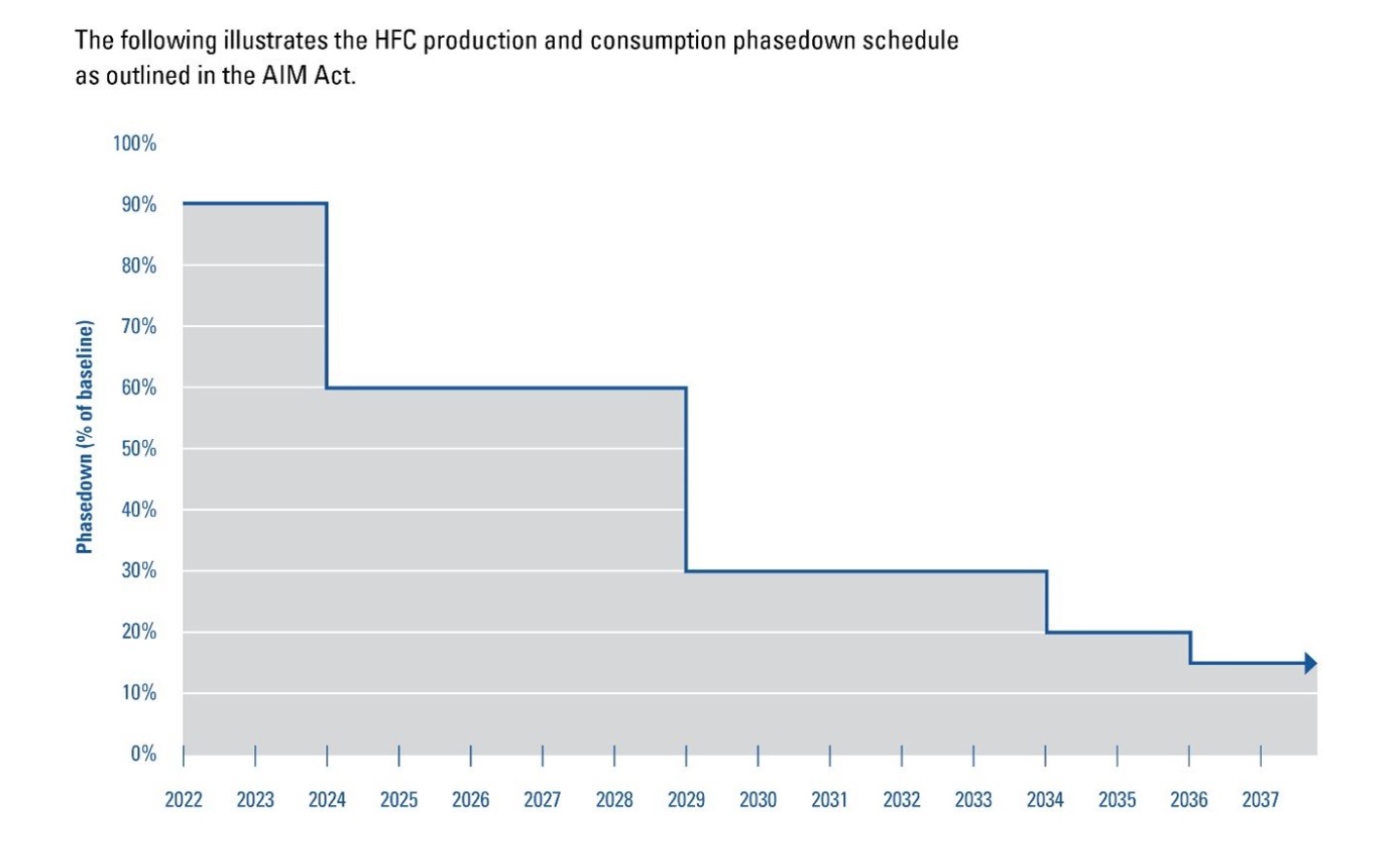 Follow-up guidance came on October 1, when EPA released the 2022 allowances for companies that produced and/or imported HFCs in the U.S (see Figures 2 and 3). Then additional information came on October 8, when EPA announced that it had granted multiple petitions that sought to further restrict the use of HFCs in sectors where they are used, such as in air conditioning and refrigeration equipment. 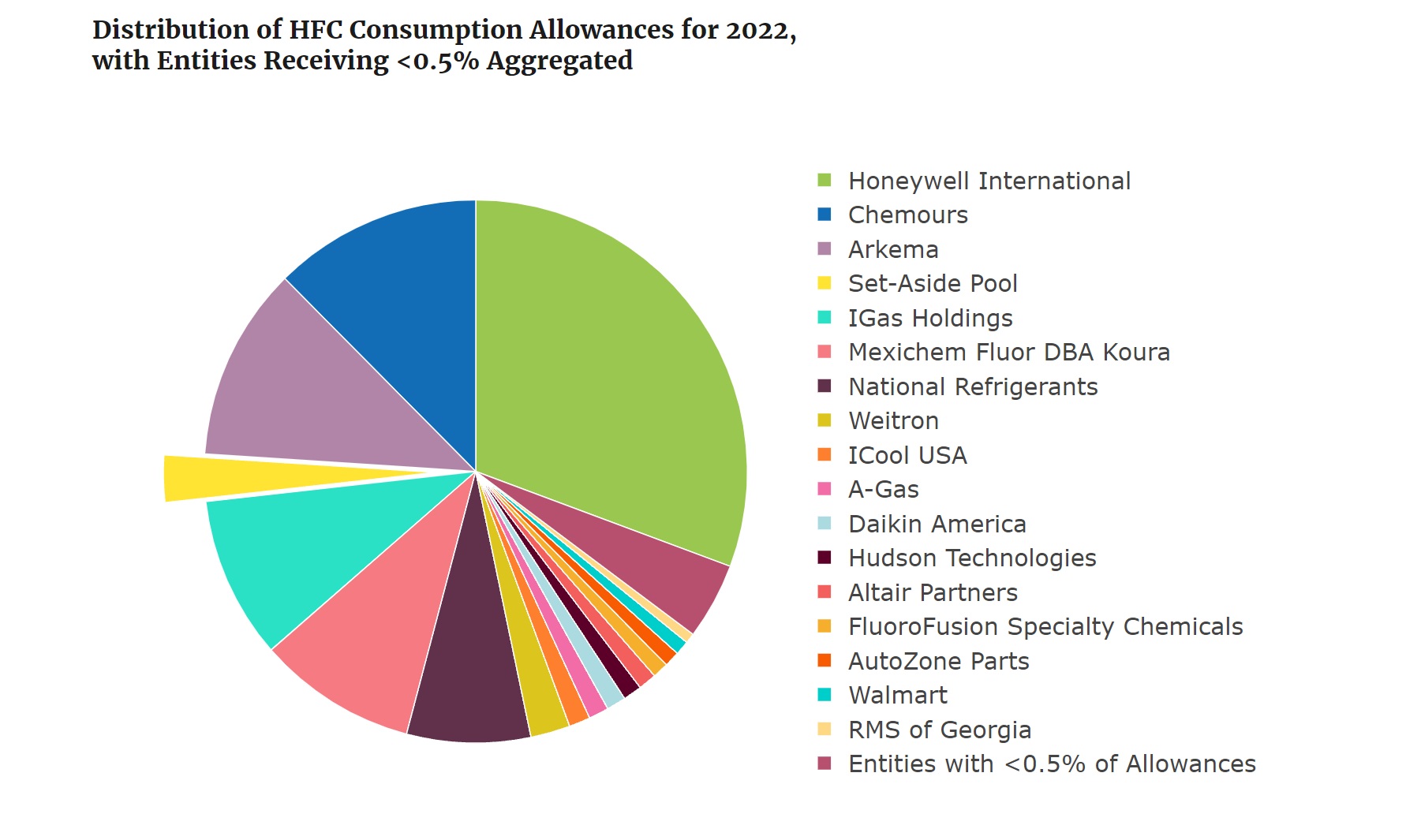 That’s a lot of information to digest over a short period of time, but stakeholders in the HVACR industry have a few opinions about how EPA plans to handle the impending HFC phasedown.

While the final rule contained several areas of concern to some in the HVACR industry, most were pleased that EPA released the information on time. Helen Walter-Terrinoni, vice president of regulatory affairs at the Air Conditioning, Heating and Refrigeration Institute (AHRI), noted that AHRI and its members appreciated the significant effort by EPA to finalize both the allocation rule and to publish the allocations for 2022 in keeping with the very aggressive schedule mandated by the AIM Act.

“It is a detailed rulemaking that required significant data collection and analysis to properly complete,” she said. “The final rule was very similar to the proposed rule, so there were no surprises.”

Joe Martinko, senior business director - Americas, thermal and specialized solutions at Chemours, added that Chemours also applauds EPA for working very quickly and diligently to meet the statutory deadline and complete the allocation rule. “The final rule outlines a large portion of the phasedown that's needed to get to lower GWP products and for the industry to meet that need with next-generation products. We're very excited about that.”

That said, Chemours was concerned with one aspect of the final rule, which has to do with the transfer tax that is levied on companies that trade allowances with one other.

“From an allocation standpoint, there's typically been a tax of 0.1% to 1%, when those trades are carried out,” said Martinko. “We were surprised that the EPA issued a 5% tax on that, as we expected it to be in line with historical precedent.”

Arkema was also surprised by the 5% transfer tax, which is significantly higher than under the ODS phaseout. Glenn Haun, sales director - Americas, Fluorochemicals at Arkema, noted that since HFCs are far more numerous, the need for allowance trading between producers will be even more important and that the much higher fees will be detrimental to achieving market efficiencies. In addition, Arkema would have liked EPA to account for imported products containing HFCs.

“The rule does not address imported products containing HFCs, which could represent as much as 10% of the baseline consumption,” he said. “This strongly favors imports of both HFCs and equipment containing HFCs over domestic production, which we believe goes against one of the main objectives of the AIM Act: helping support and advance U.S. manufacturing and technological leadership. It was surprising the agency didn’t at least offer to study the problem going forward to ensure it doesn’t become an avenue for illegal imports.”

“Under the rule, these products are not subject to the requirement to hold allowances,” he said. “But we are encouraged by EPA’s signaling in the final rule that the agency will consider addressing HFCs in imported products and equipment in a future action. The final rule also takes important steps to ensure that the HFC phasedown is effectively enforced.”

Another area of concern is that the rule requires a significant amount of new reporting requirements, which may be difficult for some to comply with, said Kate Houghton, vice president of sales and marketing at Hudson Technologies. “Additional data collection and systems to support collection and reporting will likely be necessary and will no doubt be a learning curve for many.”

However, the reporting provisions are intended to help prevent illegal imports, said Houghton, who expects to see EPA work with industry members to strengthen what currently exists. More actions may be necessary to prevent the kind of illegal importing seen in Europe after the F-Gas regulations were enacted, she added.

As a refrigerant reclaimer, we are disappointed that the EPA chose to provide all of the financial power of the allocations to the producers and importers.
Carl Grolle
President

While the HVACR industry was eagerly awaiting EPA’s final rule, finding out how HFCs would be allocated next year was of equal concern. In its methodology, EPA used the average of the three highest years of production or consumption of HFCs from 2011 to 2019 in order to calculate the baseline from which future reductions will be made. For 2022, most of the allocations went to chemical manufacturers. 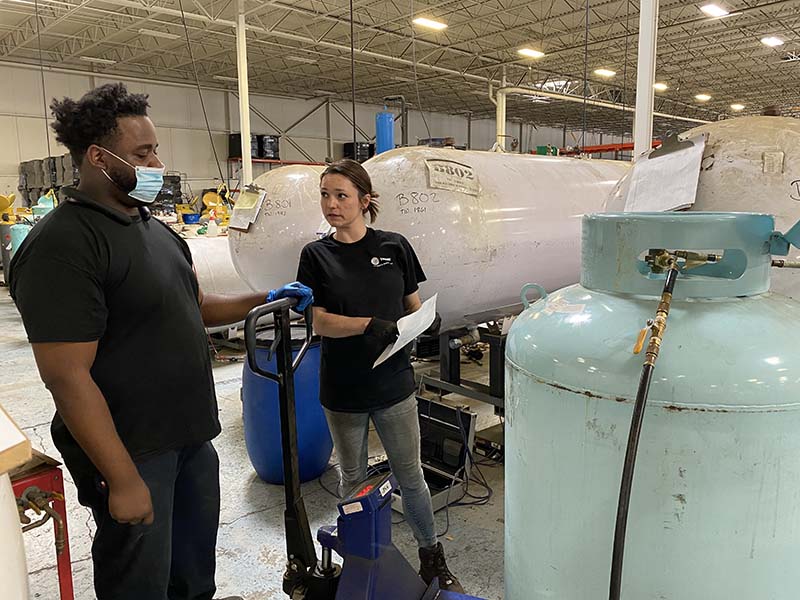 “As a refrigerant reclaimer, we are disappointed that the EPA chose to provide all of the financial power of the allocations to the producers and importers,” said Carl Grolle, president of Golden Refrigerant. “I would have like to have seen the allowances more broadly spread among industry groups. The allowances provide significant market control of all refrigerants going forward to a select group of companies. Let’s hope the allowance holders provide fair and reasonable access to the refrigerants to all parties and don’t use the allowance rights to push their interests in the marketplace.”

Daikin would have liked to see allowances be partially provided to OEMs in addition to the chemical producers, said Dave Calabrese, senior vice president of government affairs at Daikin U.S. Corp. “We believe an OEM allocation would reduce the chance of HFC market dislocation and potentially lower consumer costs. In addition, an OEM allocation would encourage a more orderly HFC phasedown by incentivizing OEMs to transition to lower climate impact refrigerants and to reduce charge volume.”

Another concern is that HFC allowances are only announced several months in advance for the following year, which does not give industry much time to react or plan. That is because under the AIM Act, EPA is directed to calculate and determine the quantity of production and consumption allowances for the following year by October 1. Chemours, for one, would have liked to see a longer timeline.

“Having visibility many years out helps us make longer-term investment decisions, especially if investments are going to include new assets, such as building a new plant,” said Martinko. “As a supplier, we would have liked to see the allocations go out a number of years — beyond 2024. We did provide that view upfront to the EPA.”

As a result of EPA’s final rule, the HVACR industry will definitely see changes in the coming years. Next year the industry must cut production of HFCs by 10%, and then a steep cut comes in 2024, when production is reduced to 60% of the baseline established by EPA.

“With the restriction on virgin supply so severe in 2024, it is likely reclamation will play an important role on the supply side,” said Houghton. “It is the contractors who do the hard work of recovery, and it will be incumbent on them to seek to recover the greatest amount possibly to lessen the potential supply gap in 2024 and beyond. As reclaim continues to increase in importance to narrow the gap on the supply side, contractors will also benefit from the dollars paid by reclaimers’ for the HFCs they recover, which we believe will help to grow reclamation significantly.”

Still, the rule adds significant cost to all levels of the industry outside of the allowance holders, said Grolle, as it is the most significant change to the rules since they were first created in response to ozone depletion.

“Reclaimers are going to have to find ways to stay profitable with the higher costs and lower yields from reclaiming blended refrigerants,” he said. “Contractors and end users will soon realize that refrigerants are going to be a scarce commodity going forward. They will need to adapt their operations to insulate themselves from the price fluctuations, increases, and product shortages. Distributors and contractors will also see significant burdens due to the ban on disposable cylinders.”

Chemours agrees that EPA’s decision to ban disposable containers starting in 2025 will be an issue for the HVACR industry. “We believe that this approach does overly burden the industry,” said Martinko. “We would’ve liked the approach of ensuring that bulk materials are certified as they come into the country, rather than just banning all disposable cylinders.”

The HVACR industry will likely see further effects of EPA’s final rule in the near future, particularly from the petitions that were granted on October 8. In general, these petitions request that EPA follow California’s phasedown regulations, which require a 750 GWP limit for air conditioning and a 150-GWP limit for most commercial refrigeration equipment.

Even though more information about the HFC phasedown will be coming from EPA, many in the HVACR industry are happy that the phasedown is finally happening at the federal – rather than a state – level.

“We continue to support a coordinated effort and believe this is a key step in the transition from HFCs to safer, low-GWP solutions such as HFOs, which significantly reduce the climate impact of refrigerants, aerosols, solvents, and blowing agents, while spurring U.S. job creation, manufacturing, and industry leadership,” said West.