Now is the time for Boston Standard Co. to reach the next level. That’s the decision owner Joseph Wood made a couple of years ago. The pandemic had actually boosted demand for HVAC services, and the city’s economy continued to thrive. Wood knew getting there takes the right people, so he started to put together the right management team.

But managers only take a company so far. Staffing has been crucial for success and growth, and that’s why Boston Standard’s leadership is dedicated to creating a workplace where employees can thrive both financially and professionally. This is one of the main reasons they were selected as the Best Contractor to Work For in the Eastern region.

It’s come a long way since Wood started the firm in his apartment in 2008. Prior to that, he had been working for his brother. It may have seemed like the best time to strike out on his own, but it turned very challenging very quickly as the housing market collapsed.

Wood did all the work, which was mostly plumbing at the time. Today, Boston Standard does mostly residential HVAC. He responded to the lower demand by taking the small jobs others didn’t consider worth their time. That’s how he built the relationships that eventually helped him grow.

“I was driving with my elbow and writing things down as I was going,” Wood said.

The Owner is in the Basement

After a short time, Wood hired his mom to run the office and brought in a few friends to work in the field. When Boston Standard had enough trucks to bother the neighbors in the apartment complex, Wood rented out a parking lot. Then he rented out a small office, which became too small, and the firm relocated to its current building.

That seemed more than big enough at the time, Wood said. Now he’s looking for another office. Wood said he would never make anyone work in the building’s basement, so he moved his own office down there when space grew tight.

“It’s certainly not me that runs it all anymore,” Wood said.

Dan Zamagini as director of operations was a key hire in the past couple of years. Zamagini first met Wood at a conference a few years ago. Zamagini was working for a mechanical contractor doing commercial work. Over the years, Wood and Zamagini kept in touch. Eventually, Zamagini left his other job. He wanted to take some time before going to work for someone else, but when he was ready, he joined Boston Standard. Finding new revenue streams and new ways to do the work better makes up most of Zamagini’s job.

“It seems each and every week we’re chipping away at new things,” he said. “It’s been great for the business, but it’s also been great for me, personally and professionally. I feel like we’re entirely different company than we were this time last year.”

Wood said he wants forward-looking people who can expand their horizons. He describes Boston Standard as a dynamic place to work with management and staff that are always looking to improve. Wood said even installs are better today than they were five years ago. 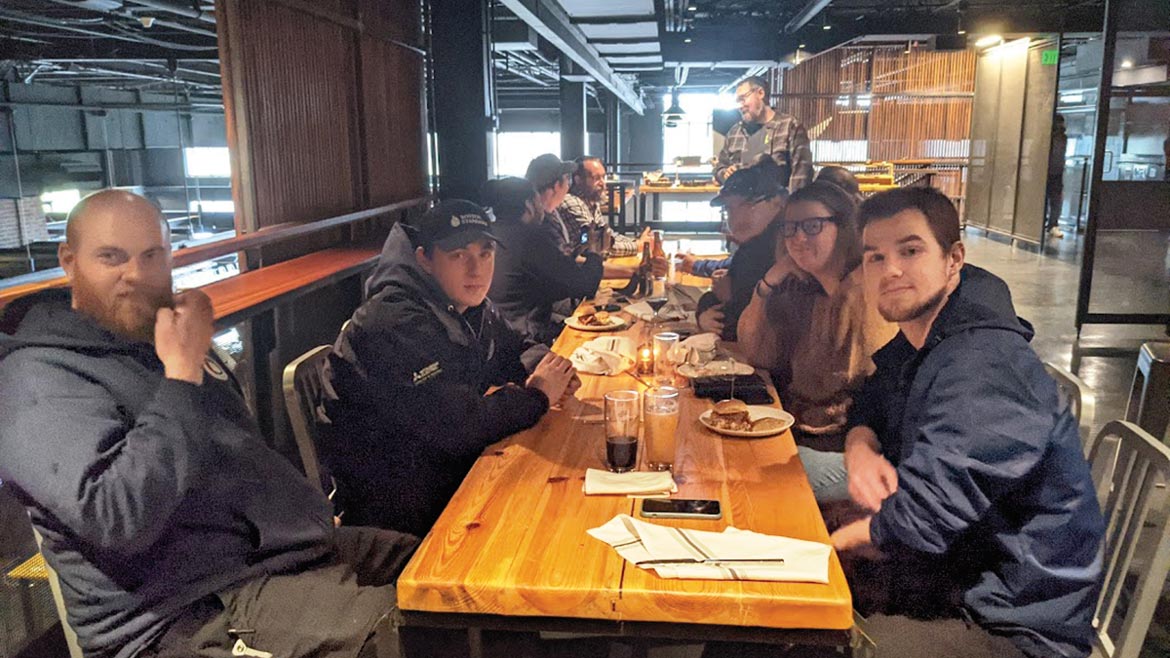 TOGETHER AGAIN: Employees at Boston Standard gathered for a holiday lunch in December. Owner Joseph Wood likes to host events throughout the year, but the pandemic put a damper on that. (Courtesy of Boston Standard Co.)

Boston Standard needs people who are open-minded with a good work ethic and a great personality, Zamagini said. They need people who are honest, punctual, and detail-oriented. In other words, employees who care and take pride in what they do.

These are traits people are born with, Zamagini said. Everything else can be taught. People with those characteristics tend to surround themselves with similar types.

“You become who you surround yourself with,” Zamagini said.

Working with others you know and get along with makes for a better environment, Zamagini said. Bill Berberan, Boston Standard’s install and business development director, agrees. He said employees rarely show up to work unhappy, an uncommon situation compared to a lot of shops he’s seen over the years.

Berberan joined Boston Standard in the past year. His last job was at a distributor, which is where he met Wood. He’s been in the trades since graduating from a local technical high school. Berberan has done everything from commercial jobs to high-end residential.

Service manager Daniel Moore said a key to keeping employees happy at Boston Standard is not driving them too hard. At one firm, he worked 93 hours. A coworker fell asleep at the wheel. 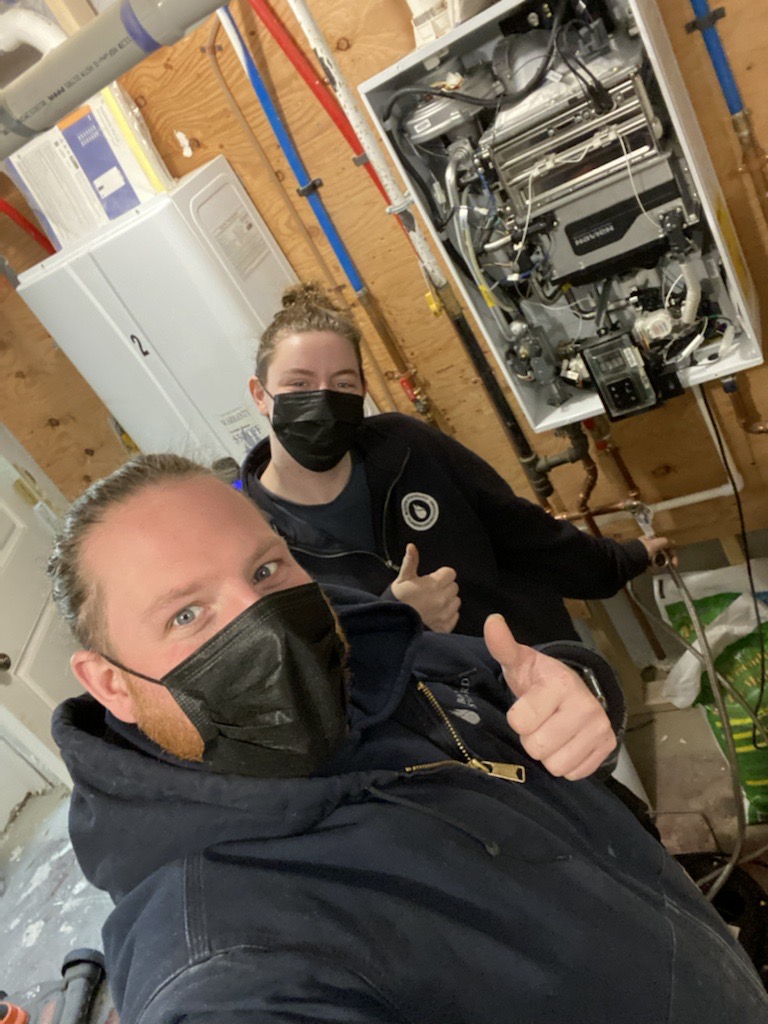 TRAINING DAY: Boston Standard staff do some training. Although the firm respects their time, employees get bonuses for finishing jobs efficiently. (Courtesy of Boston Standard Co.)

“That happens a lot more than people think, and it’s very easy to burn a technician out,” Moore said.

Communication is the biggest issue at most firms, Moore said. He puts in extra effort to get to know the technicians’ strengths and weaknesses so he can assign them to the jobs for which they are best equipped. Moore said this sets up the technicians for success.

Technicians can work pretty much wherever they want, Moore said. What they really want is a good environment where they are treated fairly, have their time respected, and receive training. In addition, Boston Standard creates an environment that attracts a more diverse staff, with several female and minority technicians.

It’s the employees that make the company stand out from its competition, Wood said. He said every customer reads the same ads from both Boston Standard and its competitors. What really makes a difference is the way the phone is answered, how the trucks look, and the people who do the work.

“Your reputation proceeds you before you show up at the customer’s home,” Wood said. “It’s more who we are, what we do, and how we do it. 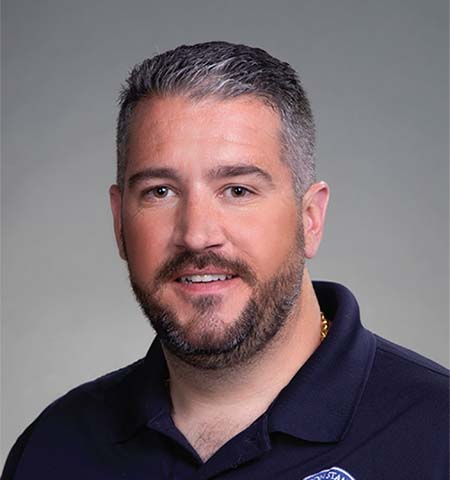 THE ACHR NEWS SELECTED THIS CONTRACTOR BECAUSE: Boston Standard provides a positive atmosphere with clear communication and a dedication to work-life balance.