Staff continue to wear masks, even when not required by law

At the start of 2021, almost every state had some kind of mask mandate. Since then, about a dozen states have dropped the requirements, either through executive order, legislation, or judicial decree. These states still encourage residents to wear masks in public but don’t punish those who opt not to.

This leaves HVAC contractors grappling with how to best address the concerns of their customers and their employees, both at their offices and in people’s homes. It becomes more complicated for those who operate in multiple states with different rules.

Texas Gov. Greg Abbott has been among the most vocal in dropping his state’s mask mandate. He ended the rule March 10. While the governor encourages people to wear masks in public, his directive also banned any local government from establishing its own mask mandate. 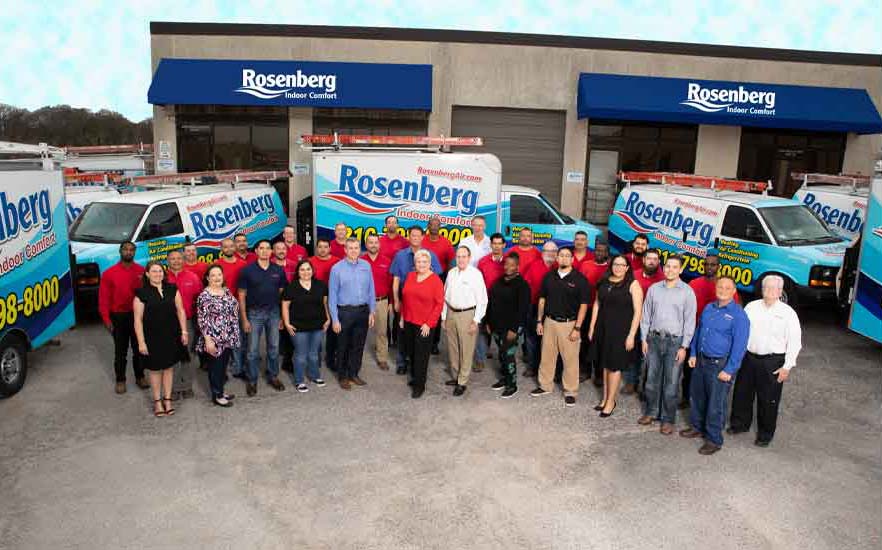 OK OUTDOORS: Employees at Rosenberg Indoor Comfort no longer have to wear masks after the state’s governor dropped the mandate. However, the company still requires them in indoor common areas.

It doesn’t prevent business owners from continuing their internal practices, and that’s why employees of Rosenberg Indoor Comfort in San Antonio, Texas, continue to wear masks. Lee Rosenberg, the company’s chairman, knows firsthand how serious COVID-19 can be. Five people from the firm contracted the virus, including Rosenberg himself, his wife Betsy, and his son Michael. Michael Rosenberg’s wife and one of his children also had COVID-19.

Lee Rosenberg said it wasn’t so bad for him, but his wife almost went to the hospital when her temperature reached 103 degrees. He remains unsure if the family outbreak started at work, but continues mask and social distancing protocols there just the same. Most employees have their own offices and can work in those without a mask. But when there is more than one person in an office, masks are required.

In the field, the firm asks residential customers if they prefer technicians wear masks or not. For commercial clients, Rosenberg tries to schedule work when few people are present and limits the number of different locations a technician visits over the course of a few days.

Oregon sits at the other end of the spectrum. The state’s Occupational Safety and Health Agency (OSHA) plans on making its mask mandate “permanent.” What this really means is that Oregon OSHA is limited in its ability to extend the temporary mask mandate. By making it permanent, regulators can keep it in place as long as needed and then repeal the mandate.

HVAC contractor Travis Smith, president of Sky Heating, AC and Plumbing in Portland, Oregon, said his firm has bought masks by the thousands since the start of the pandemic. A couple of entities are helping offset costs of those masks. The Energy Trust of Oregon and the local OSHA insurance agency have PPE funds that Smith has been able to tap.

“We’ve been able to buy a ton of logoed masks on somebody else’s dime to keep our employees safe,” he said.

That doesn’t cover all of Sky’s PPE expenses, of course. Smith has to deal with this ongoing cost on top of rising prices for everything from equipment to supplies to gas for the firm’s vehicles. Customers will soon see some of these extra costs. Smith said he reviews his prices on a quarterly basis and plans to increase them.

The mask mandates affects Smith’s business decisions in other ways. Sky just completed an office buildout that was completely changed to meet state requirements. The original plan called for an open office format. Since workers in Oregon must wear masks whenever in a common area, that would have meant wearing them the entire workday. Instead, each employee was given an office.

Any time they are in the customer’s home, Smith’s employees are required to wear masks. Oregon doesn’t get as hot as Texas, so Smith said there haven’t been any problems wearing them up in attics yet — and in the winter, they actually provided some extra warmth. Staff understands the rules, but would prefer not having to wear the masks.

“We’re just following the laws and doing it for our clients,” Smith said. “It’s not about me, it’s not about them. It’s not about their teammates. It’s about the client and making sure that client understands that we’re taking their safety as priority over our comfort.”

Oregon consumers remain cautious. Many are still calling up and postponing work until more people are vaccinated, Smith said. He said reviews that say Sky follows all CDC and state protocols help ease those concerns and probably help the firm gain business.

Smith and Rosenberg only have to deal with one set of mask rules. For Joe Mascetti, who owns HVAC firms in North and South Carolina, it’s masks on in one state and masks off in the other. Except it gets even more complicated than that.

South Carolina Gov. Henry McMaster lifted the statewide mask mandate in early March. But unlike Abbot in Texas, he left it open for local governments to continue enforcing their own requirements. The city of Myrtle Beach, home to Mascetti’s Swift Services Heating Cooling and Electrical, maintains fairly strict rules, said Scott Stewart, marketing manager for the companies. Neighboring communities have lifted their mandates.

Meanwhile, North Carolina maintains its mask mandate. Gov. Roy Cooper lifted many other restrictions in March, but the state continues to require masks. However, the sheriff in Brunswick County, where Mascetti operates A+ Heating and Cooling, hasn’t been strict in enforcing the requirement since it was issued last year.

“To avoid any confusion and to make sure we are always putting our customers first, we have a companywide policy that enforces clean masks, booties on shoes (not COVID but just how we do business), sanitizer in the truck, and most importantly, communication,” Stewart said in an email.

So the companywide mask mandate remains in place, even as the states relax their rules. A majority of customers do request that technicians take precautions when they enter their home, he said. The technician can remove the mask if the customer makes an invitation to do so, Stewart said, but the company makes clear employees will always wear one otherwise.

As both cases and vaccinations continue to rise, it’s unclear how quickly states will move on their mask mandates. Some health experts see the need for at least limited mask usage, such as in crowded indoor environments, through the fall. What governments will require is another matter, and so is what business owners, like HVAC contractors, will decide is best for their employees and customers.