Comfort Crew Heating and Cooling focuses on hiring for values

A name means a lot for an HVAC contractor. It often creates an impression in the minds of consumers of what a firm promises to deliver. Eddie Glidewell put considerable thought into the name of his company: Comfort Crew Heating and Cooling.

“Comfort” tells consumers what they can expect the firm to deliver, Glidewell said. “Crew” tells employees that Glidewell fosters an environment of teamwork. The name is just one way the San Marcos, Texas, HVAC contractor tries to set his company apart from the competition. Another is the color scheme for Comfort Crew’s trucks. Glidewell opted for green and black because too many competitors use red, white, and blue.

Marketing is a new experience for Glidewell. So is residential HVAC. He started Comfort Crew last April, after spending his entire career on the commercial side. Glidewell grew up in Arkansas and then moved to Texas after six years in the U.S. Air Force. He worked for Johnson Controls and Carrier before taking a job at a local utility. After several years there, he became service manager for a mechanical contractor in Austin, Texas.

The owner of that firm wanted to sell, but Glidewell knew he couldn’t afford to buy out the business. He also knew he didn’t want to work for a new owner. So he moved to San Marcos and started his own firm.

There could have been a more ideal time. The coronavirus pandemic was in its early stages, and consumers were hesitant about letting anyone into their homes. Glidewell said business picked up a few months later, when that delayed maintenance led to repair calls.

Out in the Field

A few months after Comfort Crew opened its doors, Toby Carden walked in and brought with him a long history of residential HVAC experience. Carden had been the service manager at his last firm and assumed a management role with Comfort Crew. His expertise led to him setting up operations for the new company. 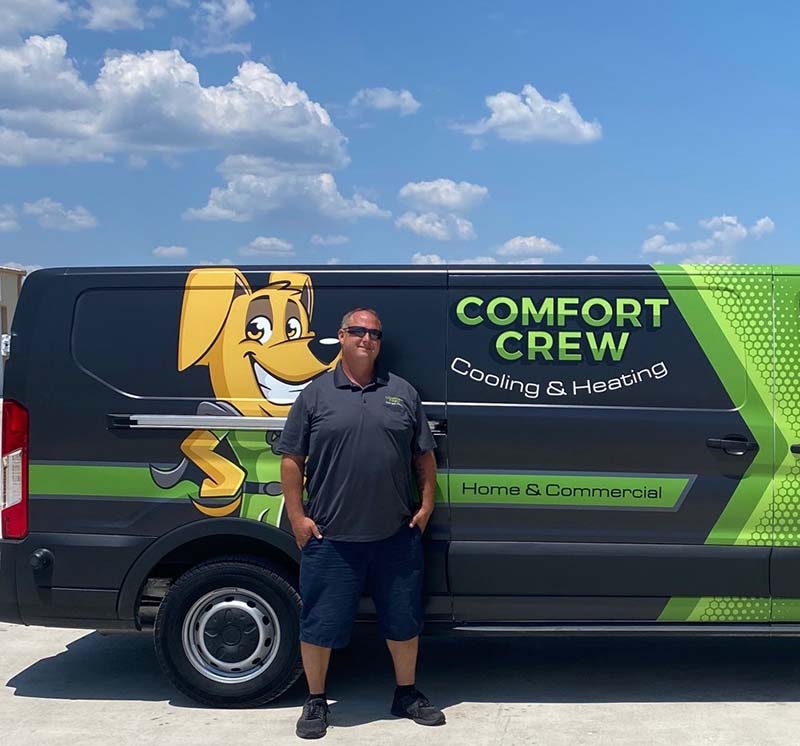 OUT AND ABOUT: Toby Carden, Comfort Crew’s field manager, gets ready to head out for the day. (Courtesy of Comfort Crew)

Carden said he enjoys the challenge of getting the phone to ring. He also enjoys the opportunity to create a service department the way he wants it to be. The best part of being a new company is a lack of established ideas about how the business should run. Carden said they adjust as needed.

Carden spent almost 20 years working in the oil fields. His wife finally tired of him spending so much time away, so he enrolled in HVAC school. Carden said the trade pays more and he’s home every night.

With only two service techs and an office manager, Glidewell and Carden spend a lot of time in the field themselves. Glidewell still handles some commercial work. Carden spends a few hours in the morning at the office before heading out on calls. That’s the way he likes it.

“I prefer the field over the office,” Carden said. “The office isn’t who I am.”

There is another worker at Comfort Crew and that’s Devin Shaw, a local high school senior who works as a helper as part of his co-op program. Shaw sought out the position on the advice of his father, a plumber.

"I'm a lot like my dad, and he thought it would be a good idea for me to get into HVAC,” Shaw said.

So far, he enjoys the work and the atmosphere at Comfort Crew. The other workers helped quiz him as he prepared for his EPA certification. Shaw plans on staying on with Comfort Crew after he graduates.

Shaw is the type of person Glidewell looks for. He developed a model for what kind of service tech he wanted before starting the business. HVAC is an industry with high turnover, but Glidewell’s goal is to hire people who will retire from his company.

“I want somebody who wants to be a part of this team and watch it grow with us,” Glidewell said.

The main criteria is values. That’s part of why Comfort Crew avoids paying its techs a commission. It’s also why Glidewell starts every day with a group prayer.