T.F. O’Brien Cooling and Heating is a product of hard times. In 1934, Thomas Francis O’Brien, like many people, struggled to find work. So, as his grandson Kerry O’Brien puts it, he grabbed his toolbox and headed out. This turned into a commercial refrigeration repair company. In the 1950s, Thomas Francis O’Brien Jr. added appliance repair and then HVAC.

Today, the firm provides HVAC services to residential and light commercial customers, having dropped the refrigeration and appliance repair businesses long ago. T.F. O’Brien moved into a facility in New Hyde Park in 1967. In 2014, the company moved into a bigger facility in the same town. It’s still a family business. In addition to Kerry, the firm’s president, there’s brothers Christopher and Thomas, Kerry’s wife Lisa and son Patrick, as well as nephew Casey. There are between 35 and 40 other employees working there most of the time.

The past year was one of the most trying for T.F. O’Brien in its 86-year history. In March, New York shut down as the region suffered the worst of the pandemic’s early days. At first, like most people, Kerry O’Brien assumed the shutdown would only last two weeks.

That turned into four weeks. And then two months. In April. T.F. O’Brien did 25% of its normal volume. That fell to 50% in May. Light commercial customers were closed, and residential customers didn’t want anyone in their homes. 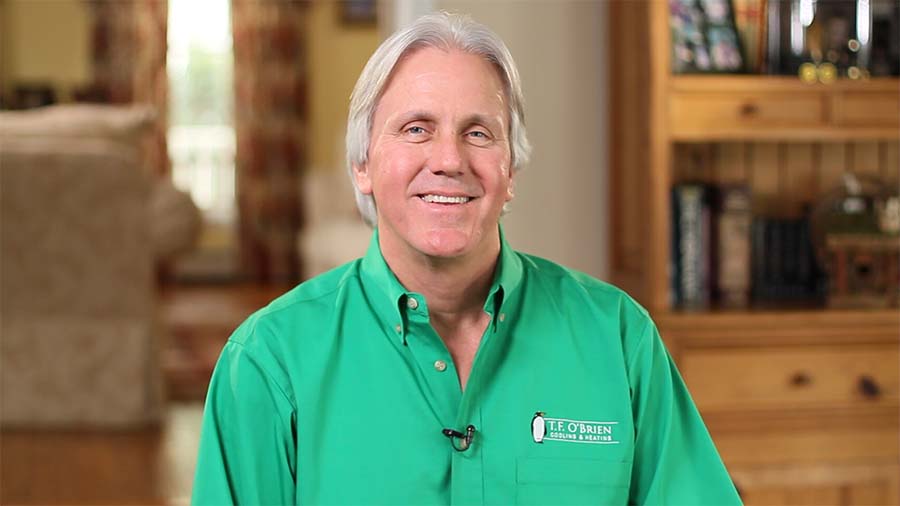 THIRD GENERATION: Kerry O’Brien is among the third generation of O’Briens to work at the family firm. His son and nephew are continuing the tradition.

Kerry O’Brien applied for a Payment Protection Program (PPP) loan through his local bank. He knew it was a race to get funding before the money ran out, and there were millions of other companies applying. The process proved complicated as the application requirements shifted.

On a Thursday, Kerry O’Brien called together senior management and said T.F. O’Brien needed to look at making some deep cuts. The deadline was passing for PPP money, and it seemed the company failed to make the cut. Then, at 6 p.m., Kerry O’Brien received a call from his banker telling him the loan went through.

“That was a lifesaver,” Kerry O’Brien said.

T.F. O’Brien retained its staff even though there was little work. By June, the business started to bounce back.

“Then it came roaring back, and we’ve been pretty busy ever since,” Kerry O’Brien said.

Cutting staff would have been painful for a company that invests a lot in its people. Like most HVAC contractors, T.F. O’Brien faces a constant labor shortage. The firm works with recruiting firms and, until the pandemic, hosted regular open houses for job candidates.

A key to addressing the shortage is treating current employees well, Kerry O’Brien said. This means fewer vacancies to fill and good word of mouth when there is an opening. Vinny Fasano, operations manager for T.F. O’Brien, said the average tenure at the company is eight to nine years, with the average for field employees at around six years. That is much higher than many of its peers.

T.F. O’Brien offers a lot of non-monetary perks for its employees, including updated fleets and an in-house training center with working equipment. The company provides 40 hours a year of paid training for all its employees. Kerry O’Brien said the training reduces stress for the technicians. Well-informed techs are also the first step to making customers happy, said Richard Hogan, service manager for T.F. O’Brien.

No Guarantees, Even After More Than 80 Years

Hogan meets with at least one technician every day. Sometimes these are just five minute conversations, but he wants them to know the company is listening to them. Once he goes through every technician, Hogan starts over again.

Fasano said the firm hosted a lot of teambuilding activities before the pandemic. These could be as simple as sandwiches in the parking lot during the summer, but they build morale.

Kerry O’Brien knows the next 80 years aren’t guaranteed. The company constantly works to grow and improve.

Like many firms, it accelerated the use of technology during the pandemic. The biggest change over the years has been the increased ability to communicate. In some ways, that creates challenges. These days, people seem much less patient, Kerry O’Brien said.

But there are many benefits. In the old days, he had to stay by the phone at the office until the last service calls were complete. If a technician ran into a problem, he had to use the customer’s phone to call in. Now, Kerry O’Brien can take those kind of calls from anywhere.