The term “ductless” includes a range of HVAC solutions, including mini-splits, inverters, and variable refrigerant flow (VRF). Ductless applications have been growing in popularity among homeowners for the past few years. Now, more and more commercial building owners see the advantages of these systems when it comes to meeting a range of needs for space and comfort, as well as providing better energy efficiency.

Controlling comfort for building occupants is a main driver of the move. People are used to this ability at home and increasingly expect it in their work environments. James DeBerry, manager of commercial marketing for Mitsubishi Electric Trane HVAC US, said technology helps meet these demands. Increased connectivity makes ductless systems an even more appealing option because building owners can now take greater advantage of their flexibility. It also allows building managers to gather more data and more tightly control HVAC usage, DeBerry said.

“We’ve observed that while building occupants are looking for personalized local comfort control, building owners and facility managers are demanding better centralized control of equipment through more sophisticated controllers and building management systems (BMS),” he said. “Having access to energy and performance data at the push of a button has been a game changer for facility managers nationwide looking to operate more efficiently. IP-based controls systems streamline management of buildings of all shapes and sizes, from multifamily housing to office buildings and mixed-use spaces.

The ability to create dedicated zones rather than attempting to meet all needs via a centralized system improves efficiency, said Doug Bougher, director of residential and light commercial sales for LG Air Conditioning Technologies USA. Unlike conventional air conditioners that cycle on and off, an inverter compressor ramps up or down to match the capacity and maintain comfort levels. This becomes more important as occupants change a space’s usage throughout a day, DeBerry said. 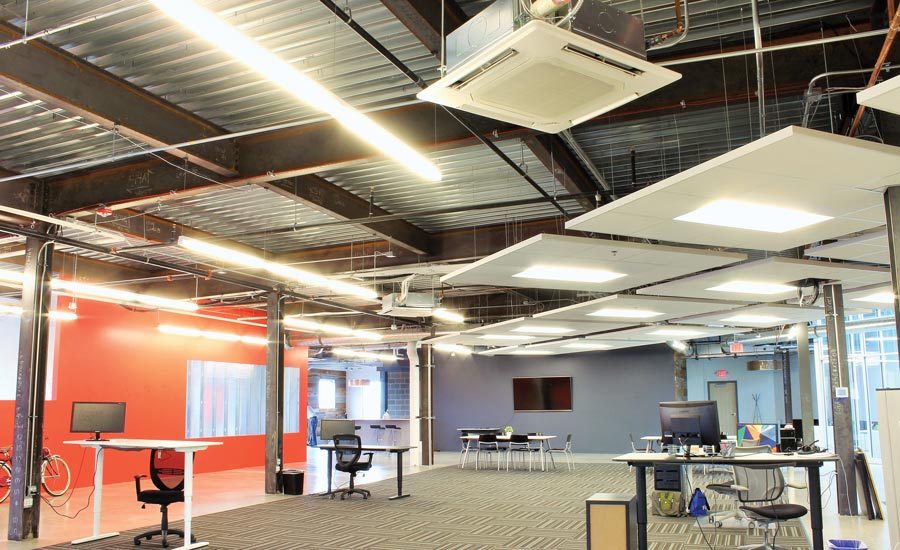 OPEN OFFICE: Building occupants are starting to expect the same level of control over their office environments that they do from their home environments.

Space is often at a premium these days, and ductless solutions help in this area as well. Many businesses measure revenue in dollars produced per square foot. The small footprint for mini-split systems allows a developer to maximize the amount of revenue-generating space, Ford said. VRF units are relatively compact, which gives architects, engineers, HVAC contractors, and building owners a wide range of options for maximizing usable space, DeBerry said.

Ductless solutions also offer more atheistic options for architects and others involved in building design, DeBerry said. Building zones may be served by a wall-mounted unit, a low-wall unit, a ceiling-recessed cassette, or a ceiling-suspended unit, he said.

Another way ductless systems improve the work environment and improve space utilization is they are quieter than traditional systems. VRF indoor units run at sound levels between 19 and 34 decibels, while VRF outdoor units operate at levels as low as 58 decibels, which is no louder than the average conversation, DeBerry said.

Energy efficiency plays another key role in the adaptation of ductless technology. Ductless efficiency is much higher due to inverter technology, scroll compressors, and individual zoning, Ford said. DeBerry said these savings offset some of the higher upfront costs associated with ductless systems. 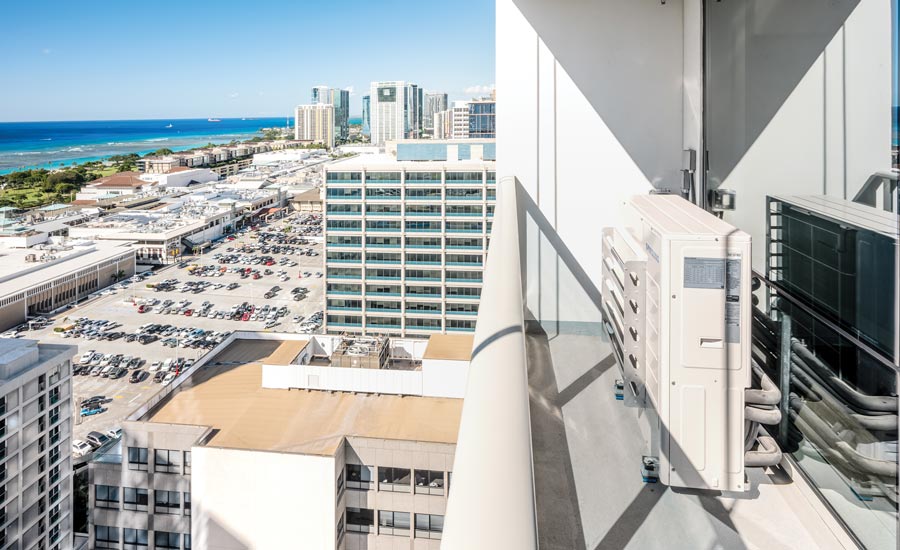 Improved efficiency is becoming as much a demand as a preference as more municipalities move toward mandated electrification. A ductless system uses electricity to heat and cool the same components, Goyert said. There is no heating side of the system requiring one energy source and a separate cooling side of the system requiring another; instead, the compressor is the primary consumer of electricity in the system, he said. The amount of work it does is based on feedback from sensors in the indoor units. These sensors tell the compressor how much load the indoor unit is seeing in the zone and how close it is to the room set point. As the zone load decreases, the compressor reduces speed — and the owner’s energy bill decreases directly corresponding to the building heat loss or gain.

As states require electrified solutions, ductless systems often prove a good option because they can be adapted for any setting.

“Ductless is a zone-by-zone installation with a significantly smaller space required for refrigerant piping,” Goyert said. “Often, it is possible for the occupants to be minimally relocated and for a shorter time to accommodate an installation.”

Because the collective zones in an area can be assigned to a single, smaller refrigeration circuit, that area can be back in operation heating or cooling much more quickly, he said.

“Existing buildings probably have the highest growth for ductless because of the ease of installation and the fact that the existing ducted HVAC system just does not work well,” Goyert asserted.

The biggest challenge for HVAC contractors comes from a lack of understanding about ductless applications. Bougher said there is a steeper learning curve for installation and application. HVAC contractors need specialized training to stay current as the technology evolves and changes, DeBerry said. They must draw upon their existing experience and the science they have already learned, then supplement that with new knowledge for electronics-driven systems, he said. Goyert agrees.

“Even traditional heat pump equipment is vastly different from ductless inverter heat pumps,” Goyert said. “Everything from the refrigerant charge calculation method to the control voltage, AC versus DC electricity, is different.”

The good news is all these manufacturers offer plenty of training for HVAC contractors to fill these skills gaps.

“By taking advantage of training provided by VRF manufacturers and distributors, HVAC contractors can distinguish themselves and elevate their businesses above contractors who either do not offer VRF systems or attempt VRF projects without the requisite training,” DeBerry said.

Getting involved with ductless solutions for commercial project now means HVAC contractors are getting in early to a growing segment, Bougher said. In addition, a ductless system increases a contractor’s ability to propose more tailored solutions for specific application needs, he said. They can offer these solutions while using less labor, he said, allowing them to compete for bigger projects.