This website requires certain cookies to work and uses other cookies to help you have the best experience. By visiting this website, certain cookies have already been set, which you may delete and block. By closing this message or continuing to use our site, you agree to the use of cookies. Visit our updated privacy and cookie policy to learn more.
Home » HVAC Contractors Are Looking Forward to New Technologies
Business ManagementHVAC Residential MarketHVAC Light Commercial MarketHVAC Commercial Market

Across the United States, contractors seem to be saying the same three things when looking at the state of the HVAC industry. First, developments in various technologies are presenting exciting opportunities for contractors to take advantage of, offering customers both high comfort and greater control of that comfort. Second, the labor shortage is presenting a challenge across the industry, and it will take creative solutions for contractors to fill their workforce. And lastly, successful customer service and engagement, as always, remain the key to success.

• State of the HVAC Industry

As technology grows and develops, contractors are given new ways to improve the workflow of their business and offer new products to customers.

Justin Krantz, officer and service manager of Krantz Heating and Cooling, said that his company has already seen notable growth in the amount of high-efficiency systems it has sold. Customers are asking about these systems.

He explained that inverter-driven units are becoming more and more of the norm. For those interested in ductless units, people still are concerned about saving energy and attaining more comfort, but they also don’t want large, intrusive units hanging on the wall. Justin Krantz said that the aesthetics of those ductless units are important to customers — the less noticeable, the better.

“There’s a growing number of people that are concerned about climate change or simply want to reduce their energy consumption to have more comfort,” said Brandon Krantz, operation manager for Krantz Heating and Cooling. “So we’re seeing a lot more people recognizing that and wanting to go with high efficiency more often.” 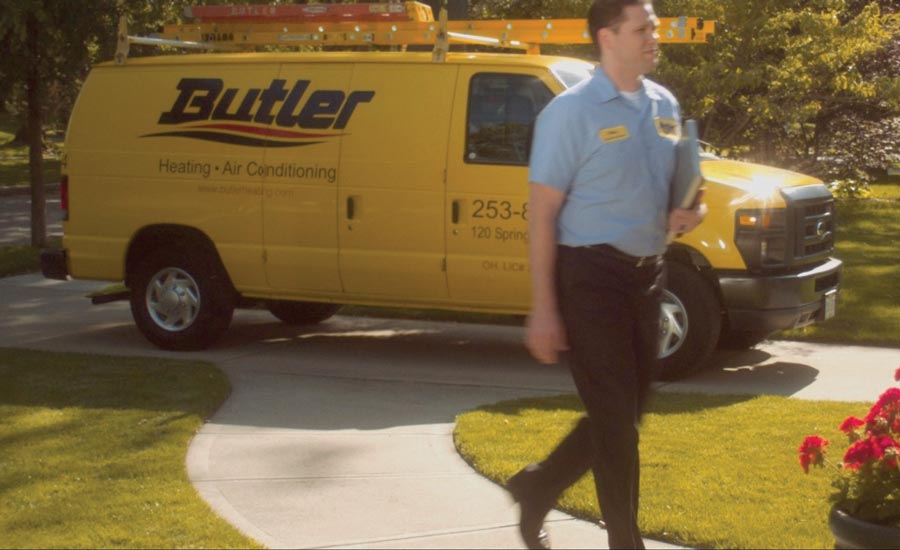 FOR THE CUSTOMER: “There’s nothing more important to us than developing long term relationships with customers,” said Nick Lamb, principal and vice president of Butler Heating & Air Conditioning.

Nick Lamb, principal and vice president of Butler Heating & Air Conditioning, also said that homeowners are beginning to see the benefits of higher efficiency systems regarding their comfort. Since utility rates have leveled out, the value on comfort becomes even more relevant.

Contractors can ride this wave by emphasizing the ability for today’s technology to offer individualized comfort, an ability that some customers don’t know exists yet.

“I’m not just replacing a furnace for another furnace to just take care of some basic heating needs in my house,” he said, “but I can really dial this thing in, measure it up to my house, and have a really comfortable system that I didn’t really know existed.” 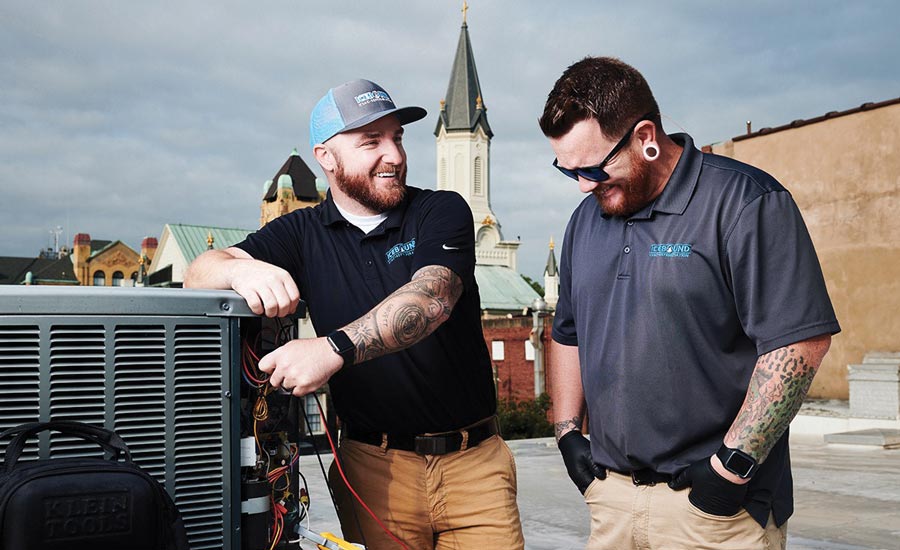 HAPPY BIRTHDAY: IceBound celebrates the “birthday” of an HVAC system with their customers. A year after an installation, the company will send flowers and balloons to the customer to celebrate.

In addition to this, developments in technology also directly impact the way that contractors get their work done. Tersh Blissett, owner of IceBound HVAC & Refrigeration, said that Bluetooth tools are having a significant impact on improving his team’s ability to get their jobs done. As the workforce brings in more and more inexperienced technicians, Bluetooth tools can ensure that jobs are done right the first time.

“You’re able to have technicians that are off-site do a checks and balances on technicians who are on-site,” he said. With real-time data transfer to the office, an off-site technician can point out readings like incorrect subcooling or superheat, ensuring that nothing is missed. In addition to this, he said, manufacturers’ tech support can go into the program and view system data in real time.

STATE OF THE WORKFORCE

It’s no surprise to HVAC contractors that the labor shortage is the top challenge described by contractors discussing the current state of the industry.

“In times where the majority of young adults don’t want to work trade jobs, the industry continues to struggle finding enough technicians and installers to fulfill the high demands needed throughout the year,” Justin Krantz said. “It’s more important than ever to become the employer of choice and train your employees to be the best they can be.”

He said that extensive training and promoting from within allows the company to have the manpower to offer timely service when demand is the highest. Making the workplace enjoyable is also critical to maintaining top talent, which is why Krantz Heating and Cooling does quarterly outings with its employees and is careful not to overwork them.

Lamb is optimistic that the labor shortage issue will eventually fade, since a lot more schools have showed HVAC as a viable career path in order to increase the placement and success rates of their students.

“Young people see their parents or older siblings struggling with college debt,” he said. “And they look at a career in skilled trades and see a service tech making well over $50,000-$60,000 and up per year with some good experience — and they have no college debt.”

Lamb believes that students are increasingly realizing that HVAC is a great career option, and that contractors can both help with this trend and benefit from it.

“I’ve signed up for pretty much any career day at any local school so I can to talk to them about HVAC,” he said. “And we’ve partnered with some local trade schools.”

Lamb will share his career path with young people and explain that the HVAC field includes not only service techs and installers but also sales people, estimators, engineers, office staff, and more.

“If you’re one of the companies that are spending the majority of time with these students, they’re going to want to come to work for your company,” he said.

Even if there isn’t an opening at Butler Heating & Air Conditioning when students graduate, Lamb is confident that they will remember his company when a job opening does arise, and his company will already have a relationship with those potential employees.

Blissett’s company will reach outside the industry to hire employees, going through a thorough process that can sometimes take up to six months — utilizing phone interviews, a dinner interview, and virtual reality training. He hires based on personality to ensure his employees will have good soft skills when working with customers.

“It’s tough to make this process super scalable, but we really value how employees interact with our clients,” he said. “So if they’re in a stressful situation, I don’t want them to bark out orders to a client because they’re stressed out because it’s five o’clock on a Friday afternoon.”

“There’s nothing more important to us than developing long-term relationships with customers. It’s not uncommon for us to run a sales call for somebody and find out that this might be the third or fourth furnace that we’re replacing for them, or replacing for their family in that same house. Customers really like that they can have the power in deciding what’s best based on their home and their budget.”
- Nick Lamb
Principal and vice president Butler Heating & Air

Blissett also explained that it is important for companies to always remember the importance of communicating well with customers in order to succeed in 2020.

Blissett’s company also celebrates the “birthday” of an HVAC system with their customers. A full year after an installation, the company will send flowers and balloons to the workplace of their installation customer to celebrate.

“It’s one of those things to say, ‘Hey, look, we haven’t forgotten about you,’” he said. His company has also stressed the importance of an online presence. His company purchased another that had zero reviews online with zero followers, and reached 2000 followers and 500 reviews within eight months.

“You might have a massive company in your area, and they may come across as a small player because they may not have a massive online footprint,” he said. “Whereas a one- or two-man shop that really focuses on online marketing may appear to be a 50- or 100-man shop.”

Butler Heating & Air also emphasizes treating the customer well. Specifically, Lamb ensures that his company does not use false information about the R-22 phaseout to scare customers into buying new systems.

“The last thing we want to see is some contractors out there spreading false information to drive sales, because it puts a bad perception on our entire industry and we want to help fight that,” he said.

His company also switched to a flat rate model a year and a half ago, allowing him to walk through various options with customers to solve their heating and cooling needs.

“Customers seem to really like that they can have the power in deciding what’s best based on their home and their budget,” he said.

“There’s nothing more important to us than developing long-term relationships with customers,” he added. “It’s not uncommon for us to run a sales call for somebody and find out that this might be the third or fourth furnace that we’re replacing for them, or replacing for their family in that same house.”

Justin Krantz confirmed that treating customers well will lead to continued sales from them, and new sales leads from referrals.

“I can buy every billboard and I can write whatever, but it’s not as strong as your best friend telling you, ‘Use this person — they took care of me,’” he said.