As refrigerant regulations become more stringent, particularly in states such as California, manufacturers are beginning to offer new refrigeration architectures that utilize low-GWP refrigerants. Several of these architectures were discussed in depth at a session at Food Marketing Institute’s (FMI) Energy & Store Development Conference, in Dallas, Texas.

Andre Patenaude, director of solutions integration at Emerson Commercial and Residential Solutions, opened the session by noting that there are no silver bullets when it comes to refrigeration architectures, as every food retailer has varying needs and wants. 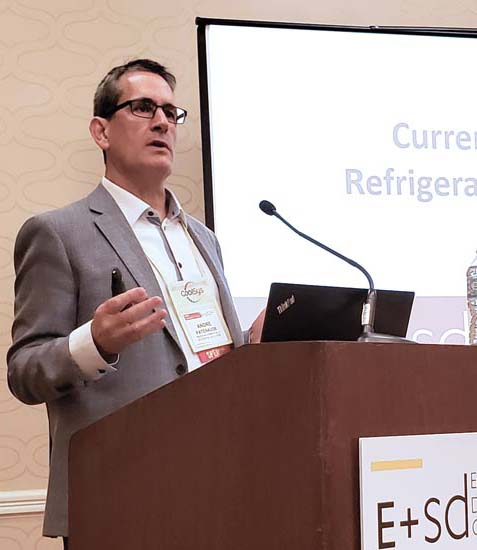 NO SILVER BULLETS: Andre Patenaude from Emerson Commercial and Residential Solutions noted that there are no silver bullets when it comes to refrigeration architectures.

“All stores are a little different in size, requirements, and needs,” he said. “Looking at the choices that are available, we understand that investment costs, operating costs, and total cost of ownership are absolutely critical. And, of course, compliance and sustainability are important in this world of regulations.”

Here are just five of the current and future refrigeration architectures that have been designed to fit a variety of food retail applications.

Michael Lehtinen, director of marketing and business development, Kysor Warren Epta US, discussed the pros and cons of centralized CO2 refrigeration systems, both transcritical and subcritical. Starting with transcritical CO2 systems, he noted that its basic design allows the use of one rack for both low- and medium-temperature loads.

“This is actually a two-stage vapor compression cycle,” he said. “You’re taking low-temperature suction, lifting it to medium-temperature suction, and then lifting that out to a gas cooler. It’s really the key element to what makes this so different from the other systems out there. Depending on ambient temperatures, an air-cooled gas cooler may be used, or if there are high temperatures, an adiabatic cooler might be required.” 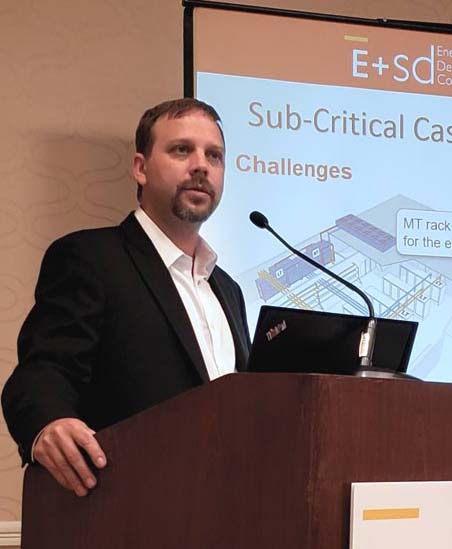 CO2 PROS AND CONS: Michael Lehtinen from Kysor Warren Epta US discussed the pros and cons of transcritical and subcritical CO2 refrigeration systems.

The benefits of using a transcritical CO2 system include its physical size, which is much smaller than that of a traditional system that uses an HFC, and the fact that CO2 has a GWP of 1, so the likelihood of it being regulated out of existence is small. In addition, CO2 performs so well in removing heat from the system compared to HFC systems that smaller diameter, less expensive tubing can be used.

“There are also opportunities with CO2 to take advantage of efficiency gains by, for example, flooding the medium-temperature evaporators,” said Lehtinen. “Using that entire coil surface allows you to bring your evaporator temperatures up, which results in an efficiency gain.”

That said, there are challenges to transcritical CO2 systems, including the need to use electronic controls, as traditional thermomechanical controls cannot be used on display cases or walk-in coolers. Then there is the biggest concern, which is the higher operating pressure of CO2.

“CO2 does operate at a much higher pressure, but it is nothing to be feared,” he said. “Another issue is ambient temperature, because higher temperatures penalize the efficiency of a CO2 system. However, things are changing rapidly in this area.”

The last issue that Lehtinen touched on was the concern many people have about CO2 systems losing their charge if power is interrupted.

“The way these systems are designed, you can go several hours with a power outage,” he said. “The idea of the safety that’s built into these systems is not that you evacuate the entire CO2 system in a short period of time, it’s what we call burping. You lose a small amount of gas as the pressure accumulates — just enough to ease the pressure on the system until that power comes back. If there is a brownout or temporary outage, you’re going to be able to restart that system and continue your operations.”

“With this type of system, two-stage compression is taken out of the equation; it’s all single-stage compression,” he said. “We’re no longer lifting from low temperature to medium temperature and then to the gas cooler that we were with a transcritical system. By eliminating that step, the system operates at a much more comfortable pressure range for many technicians. In addition, ambient temperature is mitigated because a synthetic gas is the condensing vehicle, so air-cooled condensers can be used.”

While this type of system may not be as future-proof as a transcritical CO2 system, given its continuing use of HFCs for medium-temperature demand, it will reduce the total amount of gas used in a store, which favorably affects its total equivalent warming impact (TEWI). On the other hand, the system utilizes multiple gases, so there will be different operating pressures and multiple setpoints to remember.

“With both types of CO2 systems, we have to teach people how to use, operate, and troubleshoot them, which is what we are doing. CO2 increases options and decreases costs, and we see demand continuing to grow. Looking around the globe, we see a flourishing market place for CO2 and its components.”
— Michael Lehtinen
Director of marketing and business development Kysor Warren Epta US

“With both types of CO2 systems, we have to teach people how to use, operate, and troubleshoot them, which is what we are doing,” said Lehtinen. “CO2 increases options and decreases costs, and we see demand continuing to grow. Looking around the globe, we see a flourishing market place for CO2 and its components.”

Tim Anderson, director of knowledge and principal engineering at Hussmann Corp., discussed three types of distributed refrigeration systems, starting with the microdistributed (MD) system, where each of the display cases and walk-in units is a water-cooled, self-contained unit. Heat from these units is rejected to a water/glycol loop, which in turn is rejected either to a chiller or to the outside ambient through the use of an air-cooled or adiabatic fluid cooler.

“One of the advantages of this type of architecture is that it uses R-290, which is a future-proof solution relative to refrigerant regulations that could arise in the coming years,” said Anderson. “Additionally, this system allows for a really low refrigerant charge in the store. Refrigerant charge reductions compared to a centralized HFC rack system are typically 90 percent or greater.” 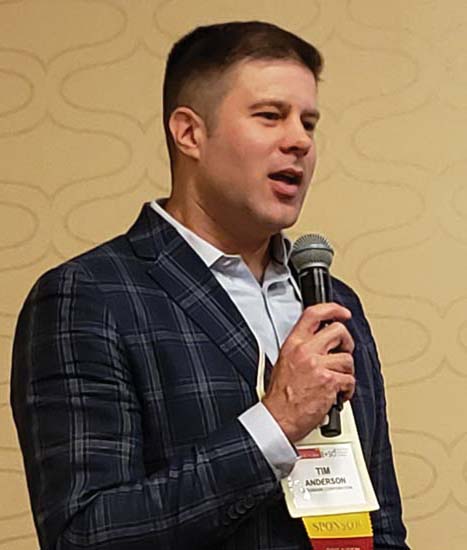 Other benefits of the MD system include very simple, reliable components, and units that are factory sealed and tested, which usually means better reliability, quality startups, and very low leak rates — typically in the range of 1 to 2 percent. The installation of this equipment is also relatively simple, as there is only a single point electrical connection, as well as inlet and outlet water connections.

“One of the challenges, of course, is that these systems use propane, which is a highly flammable substance that can only be used in small amounts (less than 150 grams in North America),” said Anderson. “There are also a higher number of compressors, which will be located in display cases on the sales floor. Finally, if ambient temperatures are over 100°F, then an adiabatic or evaporative fluid cooler will be needed to keep the supply water temperature at 115°F or below.”

“All things being equal, this has tended to be the most efficient refrigeration system architecture in the last few decades,” said Anderson. “The shorter refrigerant lines can result in a refrigerant charge reduction of about 50 to 75 percent, compared to a centralized system. No special training is required for this type of system, and it requires no special accommodations for high ambient geographic locations.”

There are drawbacks to this type of system, said Anderson, including the fact that unless the system is broken into small circuits, the refrigerant charge will likely be more than 300 pounds. With this charge size, a higher GWP non-flammable refrigerant must be used, which means it will not meet proposed California regulations that mandate a <150 GWP limit for new stationary refrigeration systems containing more than 50 pounds of refrigerant starting in 2022.

“This system allows very low compression ratios on the low-temperature side, so you get a lot of efficiency from those compressors, because the motors get smaller and they use less energy,” said Anderson. “In addition, this allows the use of a low-pressure gas like R-513A, which has a GWP of about 573, which is about one-third the GWP of a gas like R-407.”

If the codes and standards are updated to allow somewhat larger charge sizes of mildly flammable A2L refrigerants, it would be possible to use a pure HFO such as R-1234yf in this type of system to run both medium- and low-temperature units, said Anderson. In that case, the GWP would be less than 1, which makes it a safe bet against future regulations.

“This type of system also uses simple familiar components and requires no special training and no special accommodations for high ambient temperatures,” said Anderson. “It shows promise for excellent energy efficiency, based on a lot of modeling being done, as well as beta tests going on in the field now.”

Like the MD system, one of the drawbacks to this type of system is having more compressors on the sales floor. In addition, if pure HFOs are used, the refrigerant costs can become fairly high. It is also necessary to use electronic valves and controls on low-temperature units in order to ensure proper oil return.

As can be seen here, there are many different refrigeration architectures available that will work in a variety of food retail applications. Contractors can help store owners identify what is most important for their particular application, then help them choose the right system that will best meet their needs.