Get Ready For Walk-In Cooler And Freezer Regulations

Enforcement of Department of Energy standard takes effect in 2020

Starting next year, the U.S. Department of Energy (DOE) will begin enforcing its 2017 rule that mandates minimum energy efficiency requirements for walk-in coolers and freezers (WICFs). The new standard requires significant energy reductions in WICFs that have a total chilled storage area of less than 3,000 square feet, as well as in condensing units and unit coolers that provide one refrigeration load. On January 1, 2020, medium-temperature dedicated condensing systems must meet the new regulation, and on July 10, 2020, low-temperature dedicated condensing systems and unit coolers must comply.

Ever since the mandate was announced two years ago, equipment manufacturers have been working hard to produce components and equipment that meet the new energy requirements. Contractors also need to prepare for the new regulations because, as the ones responsible for assembling WICFs in the field, they must ensure that all components are certified compliant for both new and replacement applications.

The new DOE WICF regulation represents a sea change for the commercial refrigeration industry because, for the first time ever, it will require all condensing units sold in the walk-in market to meet the minimum annual walk-in energy factor (AWEF). In the past, there have not been any efficiency targets to meet for this industry segment, said Roxanne Scott, senior lead project engineer at Emerson.

“Unlike previous standards for the refrigeration industry, which traditionally only affected the end user or overall application, the DOE WICF standard takes a component-based approach,” she said. “This approach requires each of the various energy-impacting components of a WICF to comply individually; then, all the energy-efficient components are assembled to create a WICF that can cool more effectively while saving on utility costs. Since WICF components are usually manufactured by different OEMs, then assembled on-site, the ability to mix and match components was essential in the methodology of this rulemaking.” 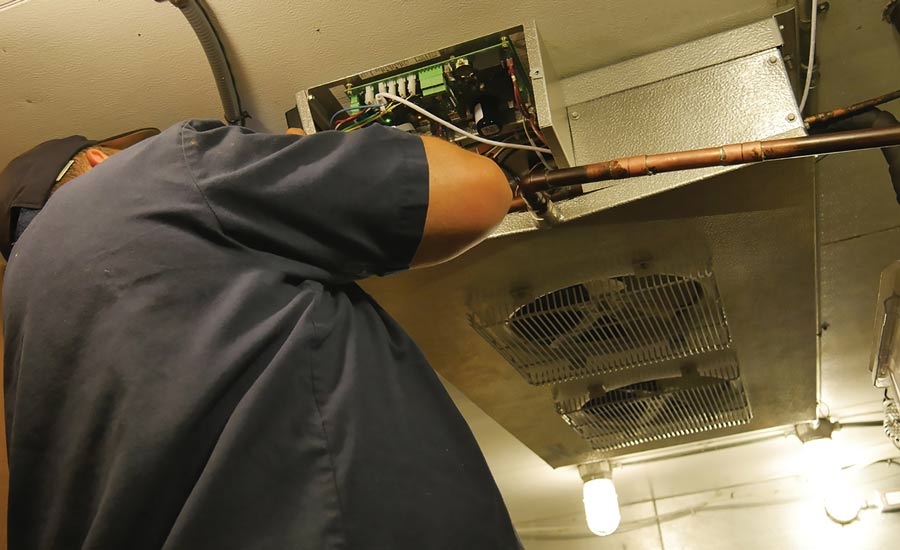 GROUNDBREAKING STANDARD: The DOE WICF is a groundbreaking standard that will affect unit coolers, such as one shown here, as well as air-cooled condensing units and packaged systems used in medium- and lowtemperature walk-in coolers. PHOTO COURTESY OF HEATCRAFT

“Contractors should know that the new standard dictates minimum energy efficiency levels (AWEF) for air-cooled condensing units, air-cooled packaged systems, and unit coolers used in both medium- and low-temperature walk-in coolers, regardless of whether it is a new installation or a replacement application,” said Mike Pennington, director of engineering at Heatcraft Refrigeration Products. “They should also have a comprehensive awareness of the new regulation and be closely associated with a manufacturer that can provide information on the regulation and the new equipment requirements.”

To determine if components are compliant, contractors can check the AWEF scores that will be included in marketing materials, as well as the DOE’s Compliance Certification Management System (CCMS) database, said Scott.

“Nameplates of compliant refrigeration products will also be marked with a certification statement that designates whether a refrigeration system is designed and certified for use in walk-in coolers, freezers, or both cooler and freezer applications; refrigeration systems that are not designed for outdoor use will be marked ‘indoor use only’ on their nameplates,” she said.

Given the complexity of the new standard, manufacturers faced several challenges in designing — or redesigning — their products to meet the mandate. One of the initial hurdles was simply figuring out how this regulation would work with other regulations, which included Environmental Protection Agency’s (EPA’s) Significant New Alternatives Policy (SNAP) Rules 20 and 21 (which were later vacated), and the WICF testing procedure (including product marking).

“Manufacturers were concurrently working to qualify new acceptable low-GWP refrigerants to meet SNAP Rules 20 and 21 while improving energy efficiency on condensing units up to 25 percent to meet the AWEF WICF regulation,” said Scott. “It was a period of uncertainty for OEMs, as there was a lack of clarity throughout the process. Continual changes and scope creep hampered engineering efforts, while OEMs still faced looming deadlines for enforcement and compliance.”

With compliance dates coming up quickly, manufacturers of condensing units determined that airflow and temperature differential were key to meeting the efficiency requirements, which led to improved airflow and pressure drops across the condenser coil via larger coil surface area and/or improved condenser technology, said Scott. 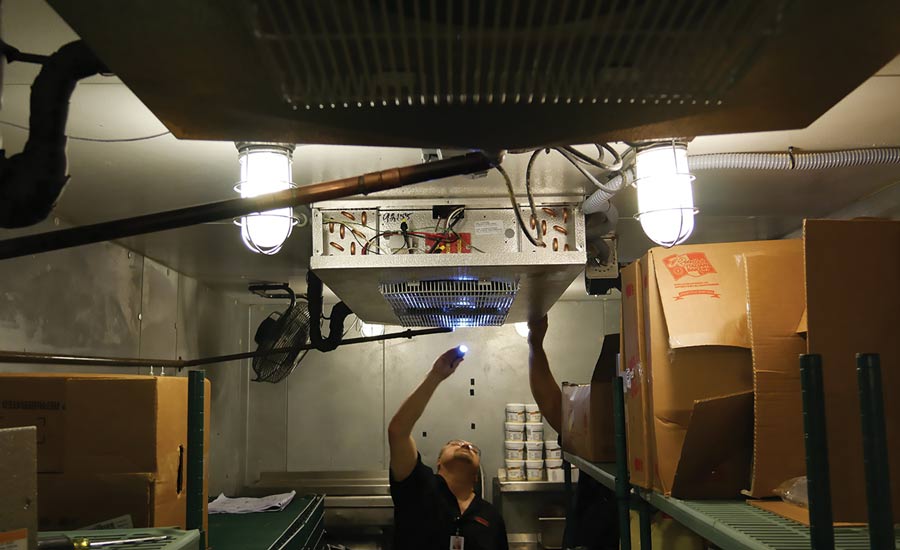 COMPREHENSIVE AWARENESS: Contractors should have a comprehensive awareness of the new regulation andwork with manufacturers that can provide information on new equipment requirements. PHOTO COURTESY OF HEATCRAFT

“The regulation dictates the use of condenser fan motors 1 HP or less to be electronically commutated or permanent split capacitor (unless they are three-phase); thus, there were changes for condensing units using shaded pole motor technology,” she said. “Manufacturers of outdoor condensing units have concentrated on head pressure and their ability to float the head down at lower ambient temperatures to achieve greater energy efficiency at lower ambient temperatures, per the test procedure.”

“With the new WICF standard requiring condensing units to meet or exceed the minimum AWEF, coupled with the fact that this application is not space-constrained, we foresee fractional horsepower reciprocating condensing units growing in size and possibly becoming their own platform for WICFs, rather than the same condensing unit being shared among case applications,” said Scott.

Manufacturers have definitely faced many obstacles in complying with the new standard, agreed Pennington, noting that some product categories pose significant challenges in realizing effective design solutions, because minimum AWEF levels may be significantly higher than the products were originally designed to achieve.

“Meeting compliance objectives in a cost-effective fashion has also impacted manufacturers,” he said. “In addition, where a significant portion of a product platform had to be redesigned, manufacturers may be challenged with inventory conversion to replace obsolete models. Finally, as manufacturers and customers interpreted the new standards, there has been a realization that some products not initially understood to fall within the scope of new regulations, actually did; for example, the 3,000-square-foot threshold lacked a height requirement, which then imposed a standard on larger equipment than was traditionally considered applicable to 3,000 square feet.”

Testing also proved to be problematic, because the regulation requires outdoor units to be tested down to very low ambient temperatures, and the test procedure requires full psychrometric chambers instead of calorimeters, said Scott. As a result, some manufacturers found it necessary to invest in upgrades, install new test labs, and/or pay for third parties to test on their behalf.

“While the DOE allows for alternative energy determination method (AEDM) for simulating AWEF scores, which lessens the testing burden, companies are still required to test a certain number of basic models for each validation class of equipment in a lab to ensure their simulation method is within tolerance of their actual tested results,” said Scott. “Companies that chose to simulate scores based on AEDM may have had to invest resources into buying or creating software to do so. Furthermore, there are about 14 different testing methods depending on the type of unit being tested (e.g., unmatched/matched with a unit cooler, indoor or outdoor, refrigerator or freezer; and single, dual or variable speed). This gives flexibility based on the product but also gives way to some intricacy in understanding the process technically.”

While many manufacturers, such as Emerson and Heatcraft, already have products available that meet the new DOE WICF regulation, they are now starting to prepare for the next round of regulations that are looming on the horizon. For example, Pennington notes that they are expecting the EPA to issue a new rule regarding refrigerants at any time.

“Many states are in the process of implementing refrigerant regulations [to phase down HFCs] because they feel federal regulations are falling behind the international commitment to the Montreal Protocol to reduce HFC emissions,” he said. “Currently, 25 states have joined the U.S. Climate Alliance, which is actively pursuing HFC emission reductions.”

There will likely be more changes made to the WICF regulation in the future as well.

“The DOE is required to review existing standards every six years to improve energy-efficiency levels while also weighing the impacts of doing so against available technology, effects on the market, costs to consumers, time and investments required to improve energy savings,” said Scott. “Once the DOE sets a new standard into final law, compliance with the law is usually within three to five years; this creates a continual design cycle for OEMs.”

In other words, be prepared for even more changes coming to the commercial refrigeration industry.