Tall buildings present a unique challenge when it comes to promoting sustainability. For example, some sources of renewable energy, like geothermal heating and cooling, don’t always make economic sense.

“The size of a building is what dictates the footprint of its geothermal loop,” said Andrew Archambault, product manager of FHP and commercial for Bosch Thermotechnology Corp. “It often doesn’t make sense for a giant-high rise, but can be a great fit for many low-rise office buildings.”

Still, many sustainable solutions — from cutting-edge technology to improved deployment of resources — provide a good return and work well even for the nation’s tallest buildings. Some major office projects, including the headquarters for Goldman Sachs Group Inc. in New York and the California Lottery, use ice-chilled air conditioning to cool employees in a more environmentally friendly manner. One of the largest such projects is the Bank of America Tower at One Bryant Park in New York, a 1,200-square-foot building in midtown Manhattan that ranks as one of the city’s 10 tallest skyscrapers.

The Durst Organization built the tower, which opened in 2010 and earned a LEED Platinum designation. It also received the 2010 Best Tall Building Americas Award from the Council on Tall Buildings and Urban Habitat, an international nonprofit that promotes sustainability.

Durst has a history of developing sustainable buildings; it basically created the blueprint for the development of LEED standards when it opened 151 W. 42nd Street in 1999. 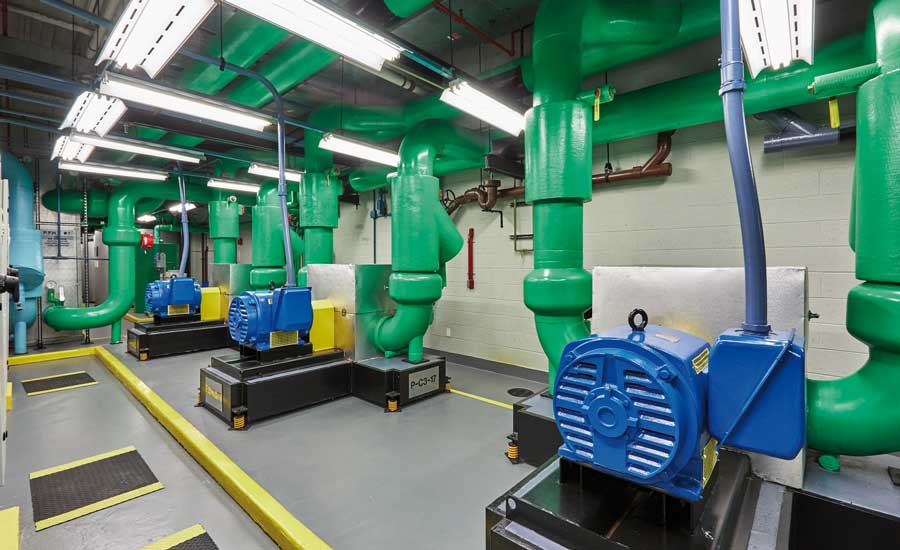 The project at One Bryant Park brought into a play a number of sustainability features, including insulated glazing and an underfloor air system. Underneath it all — literally — are 44 tanks, 750 gallons each, that store ice and provide the building’s air conditioning. They are connected to an electric-fired chiller that chills glycol down to 27°F. The glycol then runs through two miles of rubber tubing. It turns the water surrounding the tubing into ice at night. In the morning, the flow of the glycol reverses, and it goes through a heat exchanger to chill water. That water is then pumped around the building to condition the tenants’ space.

The tanks were made by Calmac Manufacturing, now a division of Trane. Calmac’s IceBank tanks have been installed in 4,000 commercial buildings, medical centers, hotels, universities, and corporate headquarters in 37 countries.

The sustainable benefit of making ice at night is twofold, said Jordan Barowitz, Durst’s director of public affairs. First is that when electrical demand is high, utilities use their oldest plants that rely on coal or other fossil fuels that produce a lot of carbon.

“Anything you can do to even out the demand curve for electricity and use more power at off-times ... keeps those older and more polluting power plants offline.”
— Jordan Barowitz
Director of public affairs The Durst Organization

“Anything you can do to even out the demand curve for electricity and use more power at off-times, when the power plants are less stressed, keeps those older and more polluting power plants offline,” Barkowitz said.

At night, power is more likely to come from renewable sources, such as wind or hydroelectric. For tenants, power is less expensive at night, so there is a savings for them.

“It also takes stress off the grid at peak times,” Barowitz said. “On an August afternoon when it’s 100°, the grid is sweating with demand. If you pull your power the night before, when demand is much lower, you protect the grid and decrease the possibility of power outages.”

“We thought at night there might not be as much demand in the building and that the plant would need to run at maximum capacity for maximum efficiency,” Barowitz said. “Without enough demand, that plant would have to power down, which decreases efficiency.”

However, there turned out to be a lot of overnight activity in this building. “There’s a lot of overseas trading, so people work 24 hours a day.”

While there is some additional maintenance due to the two-step process of cooling and then dispensing the water, the ice air conditioning is a relatively simple mechanical system, Barowitz said.

“The ice storage tanks have no moving parts,” he said. “They require very little maintenance.”

Barowitz said Durst would definitely use the technology again. Prior to this project, Durst used the system at a building located at 1155 Avenue of the Americas. The developer used it again at the New School University Center after the Bank of America Tower.

Improving efficiency doesn’t always require a new type of equipment. Another building with a bank’s name that ranks among the tallest in its city won an award for its energy reduction after working with Trane Commercial on finding solutions.

Salt Lake City has mandated that all large property owners in the city benchmark their energy use. City Reserve Inc. had been doing that for years through the EnergyStar program and in 2017 won an award for the city for its Key Bank Tower project.

Property manager Spencer Loock said Trane worked with them to identify more efficient usage of the HVAC system for this 377,000-square-foot building. Trane offers a building performance process that provides insights to building managers on how the HVAC systems and subsystems are running. By identifying systems that are running inefficiently or optimizing the runtime of equipment, managers like Loock can focus on service improvements that extend equipment life and maximize energy savings. In addition to the accolades from the city, the tenants appreciate the effort, since it saves them money in operating expenses, he said.