This website requires certain cookies to work and uses other cookies to help you have the best experience. By visiting this website, certain cookies have already been set, which you may delete and block. By closing this message or continuing to use our site, you agree to the use of cookies. Visit our updated privacy and cookie policy to learn more.
Home » Lack of Microchips Creates Big Challenges for HVAC Industry
HVAC ContractingNewsHVAC Residential MarketHVAC Light Commercial MarketHVAC Commercial MarketCoronavirus Coverage

Microchips are in computers, cars, phones, and air conditioners — even in shoes. They’re everywhere these days. Or they should be. Issues in the global supply chain left every industry scrambling to find the microchips they need for production. This creates challenges for HVAC contractors as they explain to customers why they have to wait longer and pay more for equipment.

Part of the shortage results from increased demand at the start of the pandemic. Many people added or upgraded electronics as they found themselves working and attending classes from home. Even exercise equipment bought to replace trips to the gym requires an array of microchips. Then people started buying cars. Even an economy automobile requires hundreds of microchips. Each of these items uses different types of chips, but they all come off the same assembly lines.

In normal times, a surge in demand would cause some temporary issues. It’s become a major and ongoing problem, in part because the factories that produce these chips face the same labor shortages as everyone else. So do the firms that supply the basic materials to make the chips, such as tungsten. Any additional mishap, such as a fire at a Japanese microchip plant or the winter storm in Texas, only creates more hurdles.

Chips Float Off The Coast

Even if factories meet demand, getting those chips shipped to the United States proves no easy task. Hundreds of ships float off the West Coast. The West Coast ports process about half of all the cargo imported into the U.S. via ships, with the Southern California Marine Exchange’s two ports seeing about a third of the nation’s seaborne shipments. The cargo containers on these ships hold everything from clothes to cars, and that includes microchips. A lack of dockworkers keeps those ships from getting unloaded, and a lack of truck drivers keeps the cargo from moving out once it’s off the ships. All this adds up to a difficult time finding equipment, especially units that require more microchips. 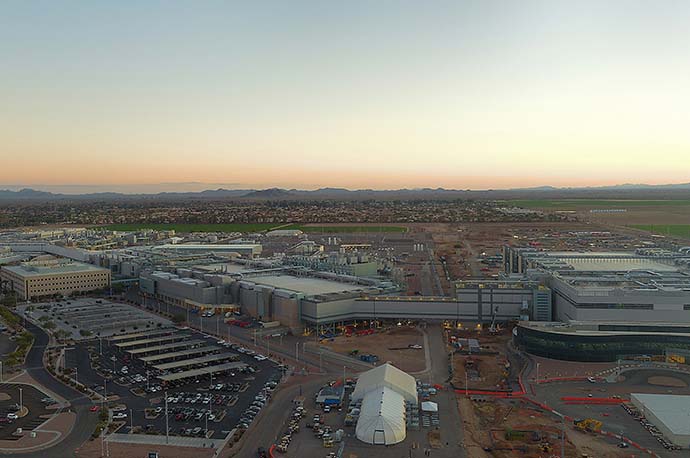 “The global microchip shortage is definitely impacting our industry, particularly with variable-speed motors and compressors, because they all have microchips as part of the controls standard,” said Mike Schwartz, CEO of Daikin Applied Americas, speaking at the company’s recent sales meeting.

Schwartz said Daikin’s factories have little warning of when a microchip delivery will fail to appear. Instead, they often don’t arrive or come up short.

“That creates huge problems, because then we have to shift schedules based on what parts are available to produce and build,” Schwartz said. “I’ve never seen anything like it in the industry, and I’ve been here almost 40 years.”

Greg Fox, co-owner of Fox Family Heating and Cooling in Sacramento, California, said he made it through 2020 and started to see equipment grow more available going into the winter. Then he started feeling the effects of the shortage in the spring. Fox sells a lot of two-stage air conditioners, the kind that require more microchips. These soon were hard to find. Fox moved to his secondary lines, but these soon ran out as well.

“It’s hard enough to be able to sell the equipment,” Fox said. “But to not know if it’s going to be there once you make the order was really leaving us in the dark. We got to the point where we wouldn’t send a contract to the customer unless we had the equipment in hand.”

Customers understood for the most part, he said. They were hearing the same from many other vendors. Fox expanded the number of suppliers he used trying to source equipment.

“All summer long, we’re bouncing around from supplier to supplier, trying to stay loyal to our main distributor, but at the same time customers were saying, ‘Hey, I’ll take whatever you’ve got,’” he said.

Ductless units were the one type of equipment Fox found fairly easily. Now he’s running out of those just when there’s a major promotion.

Fox’s suppliers told him to plan for inventory levels being low into 2022. Tony Drew, general manager for trades at HD Supply, said at Service World Expo that no one really knows when the situation will improve. It’s probably very far away, Drew said.

“This has been a very difficult time to get our hands on product,” he said.

Drew said HVAC contractors need to start thinking about 2022 now. He recommends working with suppliers so they can help contractors reach their priorities.

Eventually, the supply situation will work itself out. The demand for microchips will continue to grow, however, as the Internet of Things grows and everything gets smarter. An economy car uses hundreds of microchips. An electric vehicle uses thousands.

The coronavirus pandemic made clear how easily a limited supply chain like that becomes disrupted. There are only a handful of microchip factories operating in the United States. President Biden is pushing to spend billions to increase microchip production at home and signed an executive order to support that through a review of the supply chain.

Even if the money were available right now, it would take a while to see any results. It takes at least two years to complete construction of a microchip factory. That means HVAC contractors will just have to work through the problems with everyone else for the immediate future.

“You just have to go with the ebbs and flows of this situation we’re all in,” Fox said.