It is probably no surprise that at many industry meetings, one of the topics usually discussed in detail is how to reduce energy use with existing refrigeration equipment. After all, the commercial refrigeration system is the biggest energy user within supermarkets, accounting for about 40 to 60 percent of electricity consumption, according to the Environmental Protection Agency (EPA).

Buying new, higher-efficiency refrigeration equipment can be cost prohibitive, which is why making targeted retrofits or upgrades to existing systems may make the most sense for many food retailers. 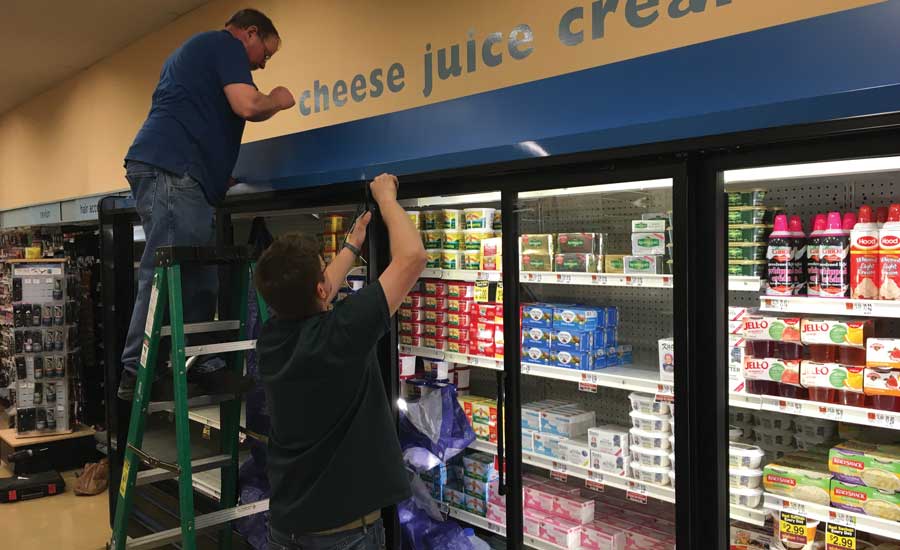 Specifically, Cochran noted that installing doors on refrigerated cases can result in energy savings of up to 71 percent. There are other benefits, too, including warmer aisles, extended product life, and improved lighting. And, since most door retrofits take place after hours, there is minimal disruption in the store.

He cited the results from a lab experiment that involved an 8-foot refrigerated case with electricity costs of 12 cents per kWh. Over the course of a year, the cost to operate that case without doors was $1,459. Putting doors on the case, raising the evaporator temperature, and limiting the amount of defrost to twice a day brought the cost down to $420 per year.

Adding doors also results in warmer aisles, noted Cochran. In a field test, the temperature of the aisles increased from 54° to 58°F to 65° to 70°F, which may encourage customers to shop longer. A lab study also found that adding doors extended the life of hamburger up to two days, while the life for other meats was extended four or five days.

“Balanced temperatures, fewer defrost cycles, and lower standard deviation from set point are all benefits,” said Cochran. “If you can keep the temperature constant, you’re going to have a better looking product. And it’s not really cold beer until you put it behind doors.”

So, with all these benefits, why would retailers not want to put doors on their cases? There are actually several reasons, noted Goldberg, including the uncertainty over the technical requirements involved in installing doors, which may result in poor planning or improper execution. Fortunately, the Department of Energy (DOE) offers guidance on how to properly retrofit refrigerated cases with doors.

There are also impacts to the rack system that need to be considered. As Goldberg noted, it is necessary to understand the refrigeration load and what will happen to it once doors are installed.

“When you install doors, you’re taking off 80 percent of a rack load, and you need to understand if you’re going to have to change out compressors, put unloaders on, etc.,” he said. “Consider the challenges ahead of time, so you don’t have to go back and make adjustments to the rack system.”

Installing doors on refrigerated cases will also impact the heating and cooling loads, and depending on the location of the store, this can help or hurt the HVAC system greatly, said Goldberg.

“Geography makes a difference, as does the store design,” said Goldberg. “Can your air conditioning system handle cooling and dehumidifying the store once all the refrigeration cases are closed? When the store was built with those open cases, they probably planned for the cold air entering the store. Many stores will also need a dehumidification strategy if doors are installed.”

Aisle width also needs to be considered, because it is likely that when the store was built, the fixture plan did not include cases with doors on them. Once doors are added, it can be more difficult for shoppers to get down the aisle. Goldberg noted that most retail operators require that two carts be able to pass each other with the doors open. If the aisles are too narrow, then doors may not be an option unless the cases are moved.

“Case life is another consideration,” said Goldberg. “We’ve found 20-year-old cases that were in terrific shape, and we’ve found 12-year-old cases that we decided not to put doors on. Take out the panel on the bottom and make sure the pans aren’t rotted. Pull out the kickplate and make sure that everything is nice and strong. It all depends on the quality of the case and how it was maintained, so consider that before making a sizable investment.”

Even with all these considerations, Goldberg still firmly believes that all refrigerated products belong behind a door.

“In an average grocery store, look at the reduced loads of every single multi-deck case having doors added to it,” he said. “Add to that the reduced lighting and HVAC loads, and if you cover the roof of the store with solar panels, it could be pretty close to being net-zero.”

At the Emerson E360 Forum in Houston, Andre Patenaude, director of food retail marketing and growth strategy, cold chain at Emerson, discussed other upgrade options that can save a significant amount of energy. He noted that making these retrofits makes sense, particularly when considering that out of 18 million commercial customers in the U.S., 5 million are in high-peak utility areas, where the demand cost can reach as much as $15 per kWh. 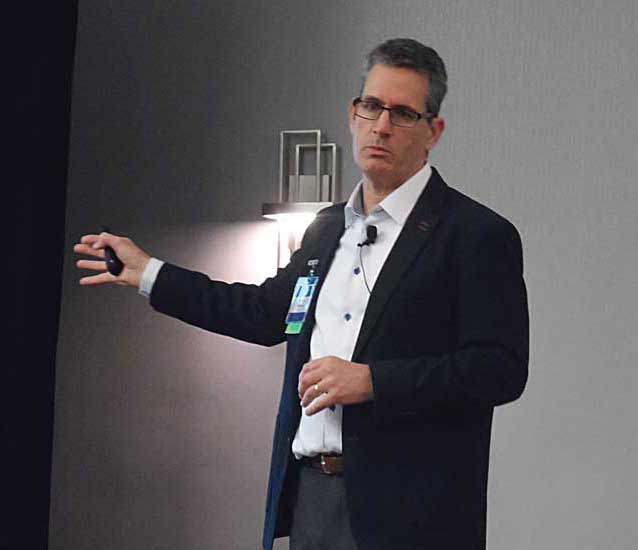 SIGNIFICANT SAVINGS: At the Emerson E360 Forum, Andre Patenaude discussed refrigeration upgrade options that can save a significant amount of energy.

“These are real, dynamic concerns, whether it’s new or existing stores,” he said. “I go to a lot of conferences, and I hear comments from individuals like, ‘It’s great that there are new architecture solutions going forward that address energy and IoT, but 98 percent of my stores are old, so how do I upgrade that old infrastructure?’”

One way is to take a hard look at traditional direct expansion (DX) centralized systems, which are the most popular type of refrigeration architecture used in supermarkets but can use a tremendous amount of energy. As Patenaude noted, these types of systems — particularly older systems — usually have a lot of parasitic losses associated with them.

“For example, older systems may have suction lines that are uninsulated or the insulation is cracked,” he said. “Or they may have a lot more flash gas in the liquid lines, which causes inefficiencies at all the expansion valves. Condensing pressure swings can also result in a lot of waste because, as the condensing pressures swing up and down, the liquid quality changes, the expansion valves are hunting, and everything is off balance. Lack of maintenance can also be a problem.”

Patenaude noted that the following steps should be considered when making energy-saving retrofits to existing refrigeration equipment:

“When upgrading a refrigeration system, it is important to know the difference between two simple words — effective versus efficient,” said Patenaude. “A lot of us think that just because there are no alarms and everything is at temperature, the system is working great. But a store might be running 15 or 20 percent more energy, so it’s not efficient, but it’s effective. How do you take both of those and combine them together? You want the system to be effective for food quality and food safety, but you also need it to be efficient in order to remain profitable.”

The answer may be to invest in targeted refrigeration system upgrades, which offer real opportunities for energy efficiency and can result in significant savings.