VRF systems can be used to heat and cool many different types of commercial applications, including office buildings, hotels, churches, and retail space. Where they have not been widely used is in supermarkets and other food retail outlets, which typically rely on rooftop units to heat and cool their selling floors and ancillary areas such as offices, banks, and pharmacies.

But that could be changing, as evidenced by at least one supermarket that recently chose to replace its rooftop unit with a new VRF system (see sidebar). Some experts believe that given the flexibility of a VRF system, there is no reason to think that other food retailers may soon follow suit.

As John Reynal, president of Encore Mechanical LLC in Southlake, Texas, noted, for supermarket owners looking to lower their operating costs and increase the time between full HVAC system replacements, VRF systems are a perfect choice.

“Given the dynamic characteristics of a supermarket space, such as 18 to 24 hours of operation per day, open entrances, varying human loads, and refrigerated coolers and freezers, the efficiencies that VRF systems provide may benefit supermarket operators more than many other ownership/occupant types,” he said.

While Encore Mechanical is entirely dedicated to VRF installation, service, and maintenance, the company has not yet installed a VRF system in a supermarket. However, Reynal expects that to change, especially as more end users become familiar with the technology. 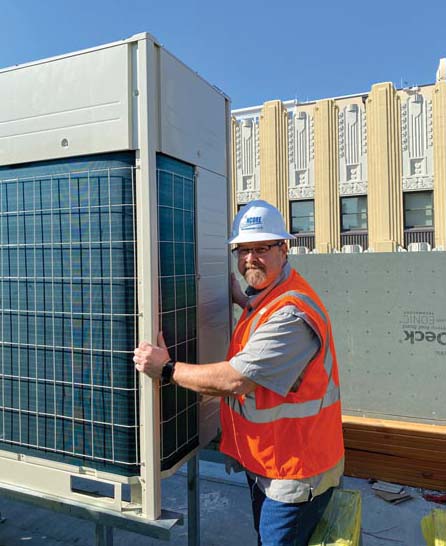 “VRF has a tremendous advantage over other systems when it comes to design flexibility,” he said. “It comes in many different capacities and can be planned based on its modularity, meaning that for companies with a variety of store types and sizes, VRF can be selected as their corporate design standard and broadly applied to their entire portfolio.”

In addition to flexibility and durability, VRF systems offer other advantages, including high efficiencies, low maintenance, and numerous zoning options, said Reynal. Additional savings are realized from lower installation costs, which include the lack of need for natural gas piping, venting, structural screening, and walls, along with lower electrical loads.

Atlantic Mechanical in Weymouth, Massachusetts, installs VRF systems on a regular basis, said Joe Gratta, the company CEO and general counsel, and while he thinks VRF could work in a supermarket, he’s not convinced that it is an ideal solution right now. But that could change in the near future.

“With natural gas readily available in most populous locations and the warehouse-style high ceilings of supermarkets, it makes more sense to use a traditional HVAC system,” he said. “Given the large amount of air volume in such large spaces, the upfront cost for a VRF system wouldn’t be economical, especially with the lack of contrast in temperature demand.”

However, as more cities, states, and utilities start moving away from fossil fuels and are promoting all-electric solutions, VRF may emerge as the chosen technology, said Gratta.

“With the proper incentives, it would make sense for supermarkets to install solar panels on their large roofs to power an all-electric VRF system,” he said. “The economics of the upfront cost, if impacted by government incentives, accompanied by the low cost of electricity from solar panels, may provide a positive return on investment. That would change the decision-making process and may be where we are headed.”

While still rare, Mitsubishi Electric Trane HVAC US (METUS) has had its VRF systems installed in several supermarkets; however, it is not as common as in other applications.

More often than not, supermarket owners use a VRF system to condition ancillary areas such as office spaces, pharmacy, banks, and restaurants, said John Bart, regional national accounts manager at METUS. In these cases, traditional packaged rooftop units could still be used to condition aisles and the larger area, while a VRF system could condition these smaller areas.

“One of the main benefits of VRF technology in these types of situations is that it allows smaller zones to have a temperature different from the main area of the store and appropriate for how each particular space is used,” said Bart. “In addition to providing conditioning for ancillary zones, there are some unique applications in urban environments where to maximize shopping space, a supermarket might have a basement where they do prep work for departments like the bakery, seafood, and deli. VRF systems are great for conditioning these preparatory spaces.”

VRF systems are also a good fit for smaller food retailers like convenience stores, where they are becoming much more common. Not only can they effectively handle the entire heating and cooling load in these smaller applications, but they can also improve the comfort experience for customers, said Bart. That’s because VRF systems quietly maintain the setpoint and vary capacity to match loads as they change due to occupancy and time of day.

VRF systems are also a smart option for convenience stores that don’t have room for a conventional rooftop unit but can accommodate a compact VRF outdoor unit, added Bart.

Gratta also believes that VRF makes perfect sense for smaller stores, because they are very versatile in applications that have space restrictions.

“Avoiding large amounts of ductwork in the ceiling, and the ability to run efficiently through shoulder seasons, are huge advantages of VRF,” he said. “These advantages are especially noticed here in the Boston area, as our historical buildings are constantly being repurposed, specifically those that may not be the most efficiently built.”

Another benefit of VRF systems is their longevity. Bart noted that VRF systems typically last anywhere from 15 to 20 years, while a packaged rooftop unit will last roughly 10 years or less before needing to be replaced.

“In addition, VRF technology was designed with energy efficiency in mind and can greatly impact a retail chain’s bottom line by significantly reducing the energy needed to create a comfortable environment,” he said. “Plus, they’re much quieter systems, which makes for a more enjoyable shopping experience.”

Some may think that the higher humidity levels experienced by many supermarkets and other food retailers may preclude the use of VRF technology, but there are ways to address this situation.

“Our Mitsubishi Electric Diamond Controls™ platform allows City Multi® VRF system owners to monitor and adjust equipment based on humidity, CO2 levels, energy usage, and other conditions or performance indicators,” said Bart. “Working with our Smart ME controller, the platform can change modes of operation based on the humidity point and use the VRF system’s dry mode to lower the percentage of relative humidity.

“The controls can also work with third-party humidity sensors and integrate dedicated outdoor air systems (DOAS),” he continued. “Typically, we’ll apply additional equipment such as a DOAS with a VRF system for comprehensive humidity control and ventilation.”

VRF systems can be used in both new construction and retrofit projects, but one drawback may be the higher initial cost of the units. However, Bart argues that the lower installation costs of VRF, as well as savings from electrical load reductions and lifecycle energy savings, make them competitive on price.

“For example, VRF outdoor units are lighter and more compact than traditional outdoor units, so they require less structural support,” he said. “They also require little to no ductwork. If we compare lifecycle and operating costs, electrical load reductions are commonly seen with the use of VRF systems, saving on overall first costs for the project.”

He added that VRF system maintenance is also simple and consists of cleaning the coils, washing the reusable filters, checking the electrical connections, and inspecting the refrigerant lines.

Given the combination of lower energy usage and better comfort, Bart expects more owners and operators to start considering using VRF systems for their convenience stores and supermarkets.

“At the end of the day, larger food retail chains are looking out for their bottom line when planning new stores that will, hopefully, last for years to come,” said Bart. “VRF technology has proven to be a consistently reliable option, outperforming other systems in longevity, energy efficiency and durability — checking off all of the requirements on most owners’ grocery lists.”

Marcel’s Supermarket in Houma, Louisiana, is a 30-year-old grocery store that was originally 14,000 square feet. A recent remodel added 6,000 square feet, with the result that the original rooftop units (50 tons) weren’t keeping up. The rear of the store was cold, while the front was muggy and warm.

The Louisiana Delta presents real comfort challenges because of very high humidity. Customers coming and going in the front of the store keep cooling loads and humidity high, and glass doors on the refrigerated cases can fog up if the HVAC isn’t capable of handling the load. A Daikin analysis, which was confirmed by an independent consultant, showed significant energy savings were possible with the efficiencies offered by their VRV systems.

Marcel’s chose a Daikin VRV system, which was able to take full advantage of shifting loads in the store, including recirculating air from the refrigerated sections to other areas. As a result, the 32-ton VRV system (a 35 percent reduction in tonnage) keeps the entire store comfortable front to back. The system consists of three Daikin VRVIII systems:

With this new system, the indoor humidity averages 55 percent — even when it’s 100 percent outside — and the glass doors on the refrigerated cases are crystal clear.

This retrofit had limited ceiling space, and choosing the VRV system meant that ductwork did not have to be added to the store. Energy consumption has been reduced substantially, even with the added square feet. Shoppers are more comfortable, expenses are down, and sales are up, thanks to the new VRF system.