This website requires certain cookies to work and uses other cookies to help you have the best experience. By visiting this website, certain cookies have already been set, which you may delete and block. By closing this message or continuing to use our site, you agree to the use of cookies. Visit our updated privacy and cookie policy to learn more.
Home » Economic Surge Propels HVAC Contracting Profits
HVAC Residential MarketHVAC Light Commercial MarketHVAC Commercial Market 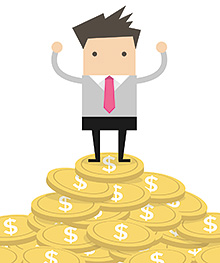 Overall economic activity in the U.S. has been slowly increasing for the past three months, and consumer confidence has risen four months in a row, according to the Conference Board Leading Economic Index (LEI). Additionally, FMI Corp. calls for solid, slow growth in its third-quarter 2014 Construction Outlook. All these signs point to a definite end of the Great Recession and a grand beginning to anticipated growth in the HVAC market.

“From what contractors are telling us, they have been very busy this year — that’s been reflected in our Contractor Comfort Index (CCI) throughout 2014,” said Paul Stalknecht, president and CEO, ACCA. “In terms of trends, we are seeing that contractors are continually investing in their businesses. They are investing in training, so they have the best possible teams to meet ever-increasing customer demands. On top of that, they are working to ensure they are still in a strong position to weather any future economic downturns.”

ACCA reported its CCI for August 2014 was 76, which is up 10 points from August 2013. The CCI is calculated based on a survey of the association’s contractor members who are asked how positive they feel about new business prospects, existing business activity, and expected staffing decisions in the short-term future. Weighted and averaged into one number, a CCI of 50 or higher reflects anticipated growth.

“They’re having a hard time getting the picture of that crash of 2008-2009 out of their minds,” said Marceau, who also serves as an economist at ITR Economics in Manchester, New Hampshire. “But, overall, when we look at macroeconomic data from within the industry itself, it seems as though contractors are doing well. Things might loosen up a little as we move forward as we expect overall economic growth over the next three to four years. When you look at economic activity, we have made a full recovery since the recession. We have a larger economy than we did prior to the Great Recession. I think the industry will get a little more confident going forward as the economy continues to grow.”

“We have seen a huge growth in new residential and commercial building as well as more spending in the residential and commercial sectors,” Smith said. “Customers are not as tight with their money, financing is more readily available, and companies are starting to expand and need more services. I am also having a hard time finding employees, which means people have either left the HVAC industry or they’ve found employment.”

Since the recession, Sky Heating & Air Conditioning has doubled in size and revenue, according to Smith. And while he plans to continue growing, he is doing so cautiously.

“We’ve added so many employees that we need a new building, more vehicles, and are rapidly adding to overhead,” said Smith. “It’s scary to add seven vehicles to our fleet in only two years and we have plans to add more, but our fleet has been aging and has not been updated since before the recession. All of our ‘extra’ vehicles are now assigned to employees.”

“When the market crashed and fear ran rampant, I started an aggressive marketing campaign,” Merritt said. “While most companies were counting their pennies and holding onto them tightly, we picked up market share. We had three straight years with more than 41 percent growth. The awareness about Fire & Ice that grew out of the recession has carried over. We’re on pace to grow 35 percent this year.

“The economy will always have its ups and downs,” continued Merritt. “A company should not blame the economy for success or failure in a need-based business such as ours. With any business, the strategy needs to change as the market changes. I would not attempt to use the same strategy I use now in a recession, nor should anyone else. I do expect many more years of growth because I rely on my company’s ability to change as the market changes. Fortune favors the bold, and we shall continue to blaze our own trail.”

While Smith and Merritt agree the recession is over, Butch Welsch, owner, Welsch Heating & Cooling Co., St. Louis, said he doubts the reports are coming from the majority of contractors around the country.

“Here in the St. Louis area, we experienced rather significant increases in new single-family permits in 2012 and 2013. Our lowest numbers hit in 2010 and were only slightly better in 2011,” Welsch explained. “By significant, I mean that each month of 2013 saw about 25 percent more permits taken out than the corresponding month of 2012. However, this year has been flat compared to 2013. In fact, through July, permits were only 2 percent greater than what we experienced in July 2013. The permit level is still 50 percent lower than our peak year of 2005. Thus, my concern is ‘have we reached a new normal as to what the housing starts will be? Some of the Home Builders Association economists claim to have data showing the rate of family formation and other ‘key’ indicators point to an increase in the number of homes required. While we hope they are right, we feel we can only wait and see. While things are better than they were at their worst, they are equally as far away from being at their most robust.”

Additionally, Welsch said he sees some buyers willing to spend more for higher-efficiency equipment, but, overall, most people are still wary of extending themselves too far and do not have confidence in the economy.

“Those buyers obtain more estimates and are more price conscious than they would have been prior to the downturn,” he said.

Greg Crumpton, president, AirTight Mechanical, Charlotte, North Carolina, said the general public — which includes his HVAC customers — is still in wait-and-see mode, so, while he is optimistic about the future, he is admittedly playing it safe.

“We had a flat couple of years in 2011 and 2012, while we set an all-time record for revenue in 2013,” Crumpton said. “This year started off very harshly — our backlog didn’t start building until mid-May. Things seem to be back on the right trajectory now.

“As a small and independent contractor, you have to [play it safe],” Crumpton added. “There are many forces that keep reminding us of why we must be safe and careful. Mainly, I think about the 38 families that rely on AirTight to feed them. Then, there is the health care debacle, the lack of talent, and the challenge of having to grow your own technicians. So, we’re careful, but not fearful — we’re cautiously looking forward.”