The HVAC industry is abuzz about the tax credits and rebates that are offered in the federal Inflation Reduction Act (IRA). The measure includes $369 billion in spending on climate and energy policies that will incentivize Americans — through tax credits and rebates — to insulate their homes, improve their electrical systems, add electric vehicle (EV) chargers and/or energy storage, upgrade to energy-efficient heat pumps, install solar panels, etc.

These incentives will likely be very appealing to customers and HVAC contractors should consider positioning themselves to take advantage of these new opportunities. At its first-ever Solar Forum, co-hosted by ACCA and Pearl Certification, experts explained how HVAC contractors can incorporate some of these services into their companies. 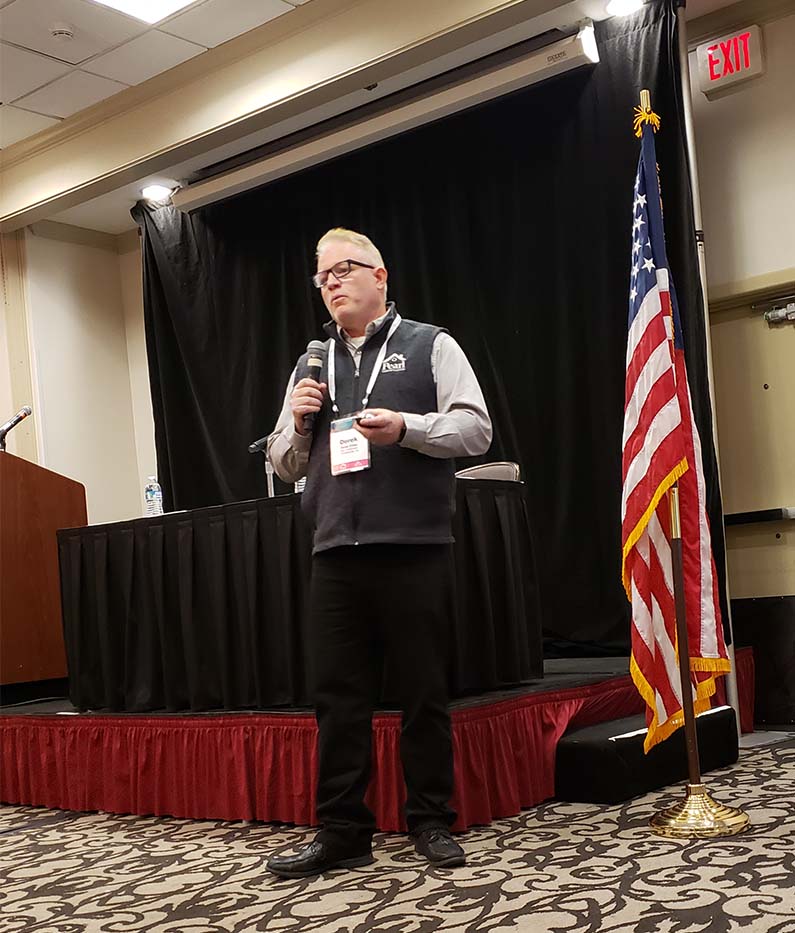 HVAC ENTRY: Derek Estes from Pearl Certification encourages HVAC contractors to consider getting into solar, as it could be a lucrative opportunity.

According to Derek Estes, vice president of the contractor division at Pearl Certification, there is expected to be 350% growth in the volume of solar installations and $51 billion in revenue by 2030. Solar paired with some sort of energy storage is expected to triple by 2025.

For HVAC contractors considering getting into solar, Estes stated that there are four entry points, with each one becoming more capital and labor intensive. The first — and most basic — level is the referral-only model, and that simply consists of technicians uncovering opportunities while they are already in the home.

“This is the easiest, most resistance-free entry point into the solar space,” said Estes. “It’s a simple handoff introduction to a customer, but always remember, your brand goes with your referral. For referral only, you have to find a reputable solar company. Look for quality before, during, and after the sale. Things can go wrong in solar, just like HVAC; the question is, who will be there to fix the problems after the fact.”

The second level is installing EV charging stations and energy storage (e.g., Powerwall, batteries). This is usually fairly simple for HVAC contractors to add, because they already have the technical personnel who can learn how to install them, said Estes.

“The electrical expertise already exists in your business, and in most cases, EV chargers are labor only, because the customer buys the charger,” he said. “The EV charging space is huge, and it usually just involves installing a box in the home and possibly upgrading the electric panel. There’s no special training involved, and in most cases, a master electrician is not needed. It is important to note that some EV chargers are significantly more advanced than others, so those can take more time to install.”

Estes noted that this is a great opportunity, because HVAC technicians will increasingly be in homes with an electrical vehicle.

INSTALL STATISTICS: Some of the interesting statistics associated with offering solar, energy storage, and EV chargers. (Courtesy of Pearl Certification)

The third level is called the sales-only or outsourced install model, and it essentially involves either running a sales team in-house or partnering with an outside firm to do the same.

“Another entity holds the appropriate contractor licenses and will be doing the engineering, procurement, and construction (EPC),” said Estes. “This model represents about 50% of the space and there are all sorts of ways on how the commissions on the sales can be split.”

This model is mostly about training, and Estes said it is important to consider whether to use existing staff to sell solar and other services, or if an outside firm should be utilized.

“Generally, when you start trying to mix trades, it can be challenging,” he said. “There are always exceptions to the rules, but it's important to keep your channels somewhat pure. The solar story is different from the HVAC story, but there are places where they cross.”

In this model, it is essential to have an accomplished leader or trainer be in charge of the sales organization, said Estes.

“You do not want to stumble your way into solar. It is a competitive marketplace,” he said. “The sales leader needs to be an expert in the business and understand the space, or you're going to get bumped and bruised really badly and your reputation will suffer. If you're running a sales organization and someone else is doing the install, again, look for quality. Know who you're dealing with, because your brand is going with them. I can't stress that one enough.”

The fourth — and most expensive — level is the full-service model, where a company provides everything from sales to installation to service after the sale. It requires a lot of capital and is labor intensive.

“This is a really, really significant undertaking,” said Estes. “It is highly capital intensive. It’s logistics. It's keeping solar panels and inverters in stock. Inverters go bad, things happen. It's just the nature of the business. It's running a service department. The companies that really stand out in solar are the ones that are tested over time. Check the reviews, and you will see the level of effort they go to fix things when they begin to go wrong. Because things will go wrong.”

You never want to forego an opportunity to make the most impact in that home, because everybody's vying for a bigger footprint in a home.
Derek Estes
Vice president of the contractor division
Pearl Certification

Regardless of the model chosen, Estes cautions against using a fixed price when estimating one of these new services.

“The average Powerwall 2 install can take from 14 to 30 hours, depending on the complexity of install,” he said. “Just like HVAC, there are a lot of unknowns in solar. You don't know until you get in there and start doing things. One of the biggest places the industry has struggled has been cost estimating projects. We've all misestimated solar battery projects, and it opens up a hornet's nest. One of the most critical roles is your project estimator.”

In a panel discussion at the forum, Babe Kilgore, CEO of NerdPower, noted that 50% of solar companies go out of business within two years. He said the three things that usually put them out of business are cash (or lack thereof), compression, and service.

“Compression means the longer it takes to install a job, the more expensive it is on a per job basis,” he said. “When people let it drag out, they’re spending time, money, resources, personnel, and they're losing customer reputation in the process.”

Having a robust service department is also necessary, he said, because customers are often buying solar based on how much energy they’re going to save every month. If that doesn’t happen, they expect the contractor to fix the problem and make it right very quickly.

“I would advise no one to jump into solar immediately. Unless you've got installation experience, and you've done a lot of it before,” said Kilgore. “Find an affiliate-based program, and ease into it, because you can always add it later. It's harder to unwind.”

That said, HVAC contractors have a prime opportunity to sell solar and related products, because they’re in customers’ homes every day, said Estes.

“A lot of those customers are making decisions while your staff is in their home,” he said. “If they're thinking about getting a battery or thinking about going solar — if that's not something that you're engaged in, you will never be in that consideration pool. You never want to forego an opportunity to make the most impact in that home, because everybody's vying for a bigger footprint in a home. That's where the long-term customer relationships and the long-term value sits.”