At the beginning of the year, most in the HVAC industry were feeling very upbeat. Despite supply chain issues, equipment sales were robust throughout 2021, and contractors reported being busier than ever. And, for the most part, they still are. According to HARDI, the average annual sales growth for the 12 months through June 2022 was 23.6% , and AHRI reports that year-to-date combined shipments of central air conditioners and air-source heat pumps through June 2022 increased 4%.

But there are some headwinds going into the second half of 2022. Supply chain issues continue to be a problem, gas prices are high, inflation hit record levels, the Federal Reserve raised interest rates, and of course, the U.S. gross domestic product (GDP) shrank in the first two quarters of the year, leading some to believe the U.S. has entered a recession. So far, consumer spending seems to be holding steady, but some are worried that that, too, is starting to soften.

“While debate regarding whether or not the United States is in recession rages on, one thing appears clear: The U.S. economy is poised to slow,” said Anirban Basu, chief economist at Associated Builders and Contractors (ABC). “What had been an economy beset largely by issues of supply is now becoming one faced with both supply chain issues and weakening demand for goods and services.”

In ABC’s recent webinar, “2022 Mid-Year Construction Economic Update and Forecast,” Basu offered his thoughts on how the economy looked for the rest of the year. He noted that with overall inflation at 9.1% and core inflation at 5.9%, inflation may have peaked, but he added that could be overly optimistic. That said, the cost of construction materials has increased beyond the rate of inflation, at 20.1% since last June, which Basu suggested may start to slow the industry, as funds from pandemic-era cash injections dry up.

“The forward-looking trajectory of the economy is far more important to contractors,” said Basu. “While it is possible that we have passed the point of peak inflation, nominal growth is also set to slow in the context of weakening consumer spending, pervasive pessimism, rising borrowing costs, and a global economy that is aggressively downshifting.”

“There is no question that rising inflation and gas prices and perhaps rising interest rates are affecting our industry, just as they are other industries, but thus far our shipment data, particularly for central air conditioners and heat pumps, indicate continued strong demand,” said Stephen Yurek, president and CEO of AHRI. “These certainly remain very significant challenges, however, and are likely to remain so at least through the end of the year.”

He added that supply chain issues remain a major challenge, largely as a result of the continued COVID-caused production slowdowns in Asia, but also because of an overall decline in worker availability.

“We are always hopeful that a resolution is around the corner, but no one has a crystal ball,” said Yurek.

Judging by elevated inventory levels, the supply chains are operating, but they are not yet operating on a consistent or reliable basis, said Brian Loftus, market research and benchmarking analyst at HARDI. He noted that operations are better now than they were six months ago and will be operating smoother and with better clarity in another six months.

As for the first four months of the year, HARDI did not seen signs of slowing, but those months are not seasonally significant and are not strong indicators of annual performance, said Loftus. The biggest months of the year for HARDI distributors are May through August, so at the time of this article, it was too early to say if demand for HVAC products is softening.

“Weather is the dominant variable during this peak period,” said Loftus. “Absent weather, we expect residential unit demand to drift back towards normal from the recent inflated levels, because the stimulus dollars have been spent, and consumer sentiment is down considerably. That is hurting the housing market, which has the additional burden of higher mortgage rates. The commercial market continues to improve and has a much easier comparison than residential. We believe the commercial market will continue to be solid, despite Fed funds increasing and GDP growth slowing.”

It’s difficult to speculate how continuing economic challenges will impact the industry in the long term, but across the HVAC industry, impact from the pandemic remains, said Doug Schuster, vice president and general manager of global ducted systems at Johnson Controls.

“That includes additional supply pressures from people working from home investing in HVAC systems to improve comfort, IAQ, and/or efficiency, which led to unplanned demand in 2020-2021 — one of the causes of supply chain issues across the HVAC industry,” he said.

Contractors should already be securing sources for HFCs, including virgin and reclaim, for not only the reminder of the year but even further out through 2024.
Chris Forth
vice president of regulatory, codes, and environmental affairs,
Johnson Controls

While there are some significant headwinds for the HVAC industry going into the second half of the year, there are also some bright spots. As Jason E. Bingham, president of residential HVAC and supply at Trane Technologies, noted, increased refrigerant costs, good consumer health, continued work from home across many sectors (aligned with IAQ awareness), and the large generation of Millennials now in home-buying mode, are good news for the industry.

“We have multiple tailwinds affecting our industry, including good consumer health, a low unemployment rate, low corporate debt, work from home trends, weather, and electrification,” said Bingham. “We should not think of the latest trends as a new normal. We are in unique times. Supply chain and inventory issues will eventually be resolved. On the other hand, labor constraints and working from home are likely to be longer-term trends. At the end of the day, our customers need a healthy, efficient, and comfortable home environment, so I am optimistic about our industry.” 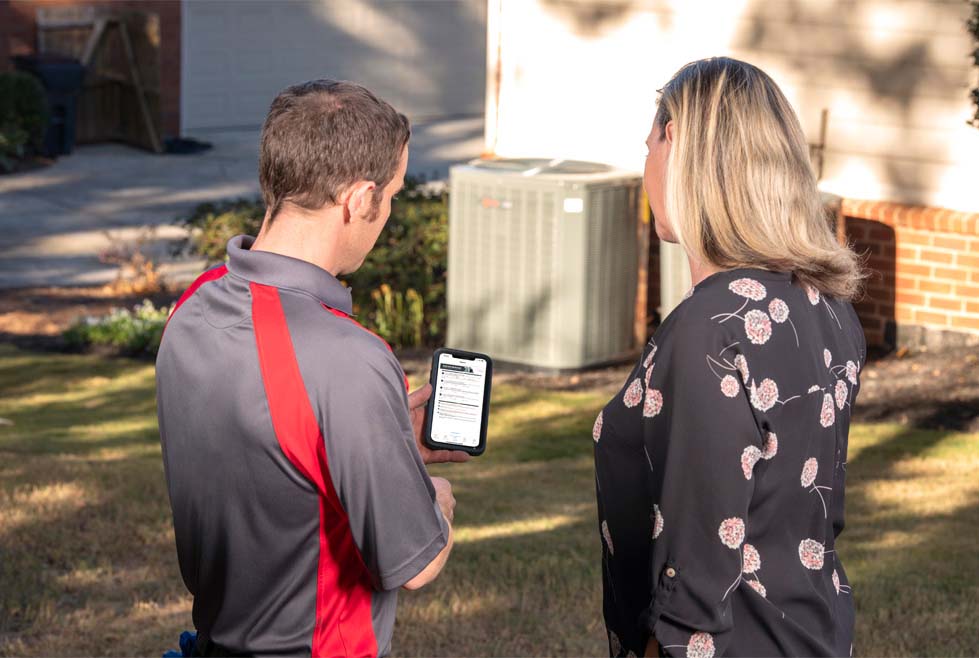 WORK FROM HOME: Working from home seems to be a longer-term trend, and consumers are looking for a healthy, efficient, and comfortable home environment. (Courtesy of Trane)

But the HVAC industry has some changes ahead, as the Department of Energy’s (DOE’s) minimum energy efficiency requirements go into effect January 1, 2023, for all newly manufactured residential and commercial air conditioners and heat pumps. The industry is also in the middle of an HFC phasedown, then in 2025, the Environmental Protection Agency (EPA) will likely ban the use of R-410A in new residential and commercial air conditioning equipment.

“Even when there’s great opportunity, big transitions like this can be painful and require a lot of coordination and open communication — especially with two regulations back-to-back: DOE 2023 and the low-GWP refrigerants transition in 2025,” said Chris Forth, vice president of regulatory, codes, and environmental affairs at Johnson Controls. “Two years is a very compressed timeframe to replace your entire offering, especially given the supply chain issues and labor shortages that contractors are facing at the same time.”

Given these back-to-back regulations, Forth recommends careful planning for the second half of 2022, particularly when it comes to the new minimum energy efficiency regulation. He noted that it is critical for both contractors and distributors to have a solid phase-in/phase-out plan, so they can take the appropriate steps to ensure they aren’t left with stranded inventory due to the “date of installation” mandate, which states that air conditioning products in the Southeast and Southwest regions must be installed prior to January 1, 2023. Heat pumps of all types are excluded, as they are designated as “date of manufacture” products, which means that as long as they are built prior to January 1, 2023, they can be installed on or after that date.

“Where possible, contractors may want to shift some of their existing orders to heat pumps, which are excluded, or to even higher tier air conditioning products that have Energy Guide labels that meet the new 2023 SEER minimums,” said Forth. “Contractors also need to understand residential system matches (old to new and vice versa) and be mindful about when they place — and the date they are likely to receive — their last-call orders. All new products built on or after January 1, 2023 must comply with the new SEER2, EER2 minimums, and test procedures.”

As for the low-GWP refrigerant transition, contractors should ideally already be securing sources for HFCs, including both virgin and reclaim, for not only the reminder of the year but even further out through 2024, if possible, said Forth.

“Just as we saw with the transition from ODP substances like R-22, reclaim HFCs like R-410A will become more valuable and, in fact, necessary,” he said. “It’s important to note that the AIM Act, as well as California’s HFC regulations, exclude certified reclaimed refrigerant. This is because for every pound of refrigerant that is reclaimed, it avoids the need for production of new HFCs. While the recovery market for HFC’s like R-410A hasn’t been strong, it is certain to become more important as the supplies of virgin and new HFCs are reduced.”

Even with these challenges, most in the HVAC industry remain upbeat about the year ahead. As Loftus noted, “We are absolutely as optimistic now as at the beginning of the year. HARDI suppliers and distributors have overcome significant uncertainty and unexpected challenges to satisfy extraordinary demand and built lots of inventory to be ready for this year’s peak selling season.”