This website requires certain cookies to work and uses other cookies to help you have the best experience. By visiting this website, certain cookies have already been set, which you may delete and block. By closing this message or continuing to use our site, you agree to the use of cookies. Visit our updated privacy and cookie policy to learn more.
Home » High-End HVAC: Contractors Should Look Beyond Efficiencies
NewsHVAC Residential MarketHVAC Light Commercial MarketAir ConditionersResidential Ductless

When the topic is higher-end HVAC, is there a better place to start than the money?

As it stands, simply staying informed and competitive on available ways to pay can turn a certain number of jobs into additional “high-end HVAC” projects.

Joseph Wood, owner of Boston Standard Plumbing & Heating, offered a prime example in Massachusetts: the Mass Save program. He said the utility-funded program is working with $800 million a year, and offering terms more attractive than any he has ever heard of: 0% financing for seven years.

In addition, this kind of program may attach strings that serve as not just a financial tool but as a hidden driver for customers to invest in a better system: Only purchases meeting certain efficiency requirements are eligible.

Outside of special programs, don’t discount the power of financing, regardless of the customer or neighborhood. Boston Standard offers its own in-house options.

“I’d guess half of our customers use it,” he said. “I don’t think in all cases because they need it; it’s just 0%, so why wouldn’t you take it?”

Modern financing options can not only motivate buyers to choose higher-efficiency equipment that often carries a somewhat higher first cost, but also open the door to adding to the project scope.

Where there were once “simple little boiler” types of jobs, what Wood sees much more frequently now is “a full retrofit, because you can afford to pay it off very cheaply.”

Efficiency may be a common metric for system quality, but it doesn’t offer the aesthetic gratification of granite counters or other upscale amenities for a homeowner investing in a renovation. Efficiency only shows up in utility bills, and even then, it has its limits.

Laura DiFilippo of DiFilippo’s Service in Paoli, Pennsylvania, has thought along the same lines.

“We don’t really do anything higher than 16 SEER here,” she said. “We don’t see the point of going higher when, if installed correctly, you can get great savings from 16 SEER, two-stage equipment.”

If efficiencies are reaching the point of diminishing returns, then contractors will have to look elsewhere to distinguish their value and offerings, especially the more expensive options. For contractors who work in more densely populated areas, Wood has found substantial success changing the conversation to a fresh angle: noise.

In fact, Wood says noise is “probably becoming the main thing we sell on” for many urban projects, given close quarters. He has come to the conclusion that “noise pollution” is an accurate and useful term.

“If you hear an air conditioner blaring underneath someone’s patio while you’re having a cookout,” he explained, “that’s not adding anything. It’s taking away from the experience. So we talk about that a lot,” as opposed to incremental efficiency gains.

That sets Boston Standard apart from its competition on its own, but Wood explained that it has an added psychological advantage.

“I don’t think people ever really thought that was something you should fix; you wouldn’t shop based upon the noise. Customers don’t even know to ask for it, so when we present it, they like it even more.”

The status quo is also changing on the new construction side of things, but in a different way. When it comes to new-home HVAC, especially in larger neighborhoods, Johnson Controls product manager Jason Wilson thinks that some old norms are getting an overhaul. 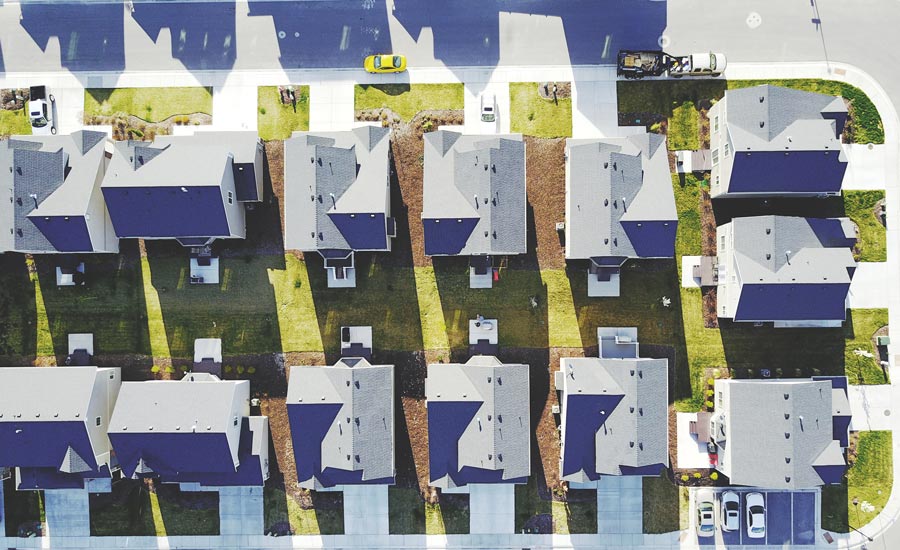 “Recently, we’ve seen a turn in the market where potential homebuyers recognize the value of a quality, high-end HVAC system,” and the builders are reacting to the shift in demand by installing better systems.

Wilson attributes this to younger generations who are “more in tune with technology adoption, environmental sustainability, and energy savings,” especially those who might be purchasing a home for the second time.

He wouldn’t call the shift a “mass adoption” of premium systems, but Wilson’s company sees the largest growth in mid-tier modulating systems in the 15-17 SEER range. It only helps that “the cost curve is also going down as more ducted horizontal discharge systems are introduced to the market,” he said.

As for existing dwellings, Wilson cited a Gallup poll from April of this year that found 51% of Americans are still working from home either full- or part-time.

That translates to higher bills, and Wilson suggests the added expense drives additional owners into the market to replace older, less efficient units.

Getting In The Zone

Both Wood and Wilson point to zoning as another beneficiary of recent demand trends in higher-dollar projects.

Wilson mentioned that Johnson Controls has responded with systems that can customize comfort for up to eight zones in a home without complicating installation or maintenance for contractors doing the work.

Wood says that the traditional customer desires haven’t changed, but what the contractor can do about them has.

But now, Wood discusses a four-level, one-system, inverter-driven heat pump that serves a walk-up brownstone with neighbors across the walls in either direction.

With earlier equipment options, Wood quipped, “that job would be a guaranteed complaint.”

However, Wood’s team’s solution comprised a Trane XV20i inverted heat pump that covers heating needs “probably down to a 40° range, and then we engage a hydronic coil. So a lot of control going on, definitely more than there used to be.”

The customer liked the experience and results enough to refer a neighbor with a similar residence.

Put It In Print (And Pixels)

All these possibilities have to funnel into effective marketing to avoid missing out on potentially interested consumers.

At Boston Standard, “as far as print materials, we don’t just say ‘air conditioning.’ We talk about the best stuff. We’ve positioned ourselves as that sort of business, to be a high-end company.”

So has Arista Air in New York. The company’s website includes an article titled “Luxury HVAC for Luxury Residences: Why You Need VRF Technology.”

The article touts a list of six specific positive attributes about VRF, spending a couple of paragraphs on each item. Energy efficiency isn’t No. 1 on the list. It’s No. 6.

So what is the title of the first section?

Can’t hear the TV … waking up the baby … Arista leads with the vision of eliminating daily frustrations.

After making sure consumers are up to date that VRF can heat as well as cool, and emphasizing its ability to eliminate hot or cold spots, Arista moves on to “VRF technology works with modern controls.”

Johnson Controls’ Wilson added that while that functionality used to reside more in the high-end domain, “consumers expect a system at any price point to be seamlessly controlled anywhere on their smart phone and connected to a smart controls system that offers intuitive schedule control and geo-fencing for enhanced efficiency.”

Arista’s fifth section hits on one other factor that may be easy for contractors to overlook ahead of a pitch.

Preserving ceilings and closet space matter to all sorts of customers. As for outdoor aesthetics, Arista even links to another article with “15 creative ways to hide your outside air conditioner.”

Only after all that does Arista wind up with saving on energy bills, the upside of doing well at partial-load conditions, and conserving natural resources.

“We’re seeing everyone ask about that,” Boston Standards’ Wood said, referring to public sentiment moving away from natural gas in many areas. Turning global warming or decarbonization awareness into an advantage where it aligns with product lines may not always be on other contractors’ radars as a conversational tactic.

“As a technician, sometimes I would be thinking, ‘Please just let this be an on/off appliance!’” Wood recalled.

But he understands that things are moving in that direction either way, and Wilson pointed out that the trend is going to get another nudge.

Today’s top of the line is tomorrow’s middle of the road, so it is worth the investment of time and training to learn how to work with it well.

While Wood shares that manufacturer territory managers have come and talked about the margins on higher-efficiency equipment, he passed along a final upside that may not show itself until later.

“Even though it’s more complex, it solves problems,” Wood said. “Once in a while, you actually find that the reason we can adjust something and make a system better is because we put in a better piece of equipment in the first place.”