A Lesson in Transitioning to A2Ls in Supermarkets

A British food retailer details its successful move away from HFCs

The refrigerant landscape in the U.S. is changing due to regulations that are moving swiftly through federal and state governments. At the federal level, Environmental Protection Agency (EPA) has until October to determine how it will administer the phasedown of HFC production and consumption in the U.S. over the next 15 years. At the state level, various legislatures are passing their own regulations that will strictly curb the use of high-GWP HFCs, such as R-404A and R-410A, over the next few years.

While the U.S. is just now embarking on its HFC phasedown journey, Europe has been on the path for several years. At a recent webinar hosted by Emerson, attendees were able to learn how the U.K.’s third largest supermarket chain, Asda, will successfully transition its refrigeration systems away from high-GWP HFCs to the mildly flammable (A2L), low-GWP, HFO refrigerant, R-454A.

Those in the U.S. may not be familiar with Asda, a $32 billion omni-channel retailer in the U.K. that provides numerous services both online and through a variety of brick-and-mortar buildings ranging from 5,000 to 100,000 square feet in size. Asda also offers gas stations and a plethora of third-party concessions, but food makes up the vast majority of its sales.

“From this new technical approach, we created a system that allowed Asda greater control and standardization of its refrigeration assets,” he said. “Over time, all stores were transitioned from a centralized system to distributed systems, which resulted in benefits such as best value investments, better operational cost, system reliability, and reduced environmental impacts.”

Moving from a centralized system to a distributed system involved removing large 500- to 600-hp, single, centralized unit systems and replacing them with smaller 100-hp distributed systems, or packaged modular systems. This resulted in having more units across the store that were close-coupled to display cases, said Churchyard, which significantly reduced refrigerant charges and maintenance costs while improving and driving the standardization of components. This was one of the key benefits, as Asda could decommission systems, remove the refrigerant and spare parts, then repurpose those back into its existing fleet. 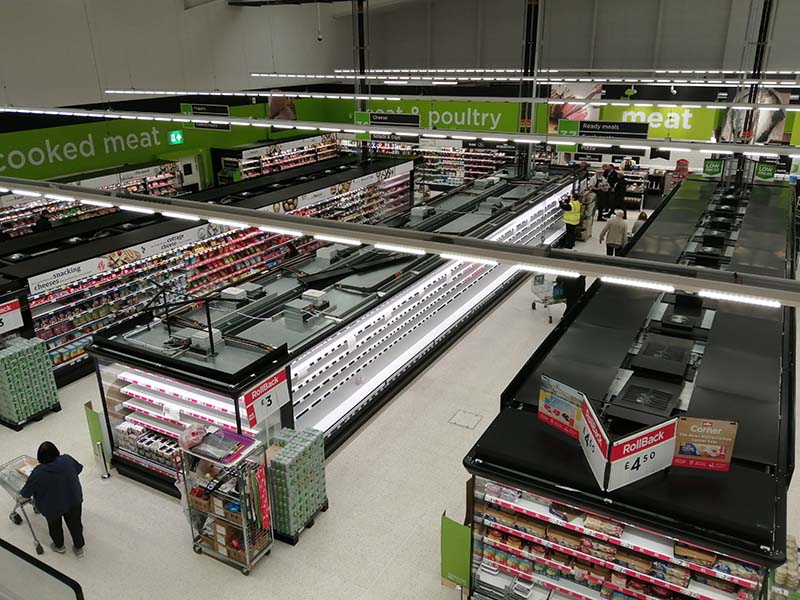 NEW DESIGN: This full run of display cases was installed in 2018 at an Asda store. The company moved from a centralized refrigeration design standard to a distributed design standard. (Courtesy of Asda)

“Display case technology had ultimately not been redesigned or rethought for many years,” he said. “Mistral display cases have been developed to complement our distributed design standard, effectively eliminating all internal components from the display case with the exception of display case lighting. It is effectively a forced air system from an air handling unit, significantly reducing the refrigerant volume charge of the system, simplifying our technology, and reducing energy consumption even further.”

Since Mistral display equipment was designed with agnostic refrigerants of choice in mind, it's applicable to any type of refrigerant, whether it be HFCs, CO2, or HFO. After deciding on a distributed system standard all those years ago, Asda considered the available refrigerant options and decided to move all of its existing fleet from R-404A to R-407A, then to R-407F, which started in 2012. The company transitioned again to R-448A in 2014, which provided even more significant GWP benefits, as well as energy benefits, said Churchyard.

“With the refrigeration fleet now operating on smaller distributed systems a full transition away from R-404A to a lower carbon impacting refrigerant was quick, cost effective, and actually added value to the businesses operation,” he said. “This, in turn, allowed head space to look closer into the next generation of technologies that could maintain the existing distributed architecture, which had serviced the businesses refrigeration requirements so well over the years.”

This led Asda to start considering other alternative approaches on a “trial not error” basis, said Churchyard. This included all the mainstream alternatives (e.g., secondary systems, water-cooled and air-cooled plug-ins, transcritical CO2) that, for one reason or another, did not stack up against most of the measures that Asda had set out as benchmarks measured against the small distributed R-448A DX design standard.

“When we actually looked at the overall cost of ownership and emissions, then measured against our benchmark, we quickly came to realize that over an extended 20-year period, there would be significant cost and environmental impacts by applying any of these technologies,” said Churchyard. “It was at this point which we were led to rethink our approach once again.

In 2022, regulations will take an even stronger hold over the choice of refrigeration systems, where HFC-based systems will no longer be able to be purchased on the market, which leads Asda to where it is today, he said. “Because we'd moved to a smaller distributed system — typically 100 hp in capacity size — this was an ideal opportunity for us to look at moving realistically to an HFO or A2L design standard.”

Asda ultimately chose the A2L refrigerant R-454A, because it has the best capacity and performance, and with a GWP of 238, it is under the required 400 GWP needed to meet the quota reduction set for 2030 at 79% versus 2015 quantities. If there is a need to go below the 150 GWP benchmark in the future, Churchyard noted that they will be able to meet that regulatory standard by selecting the appropriate A2L refrigerant, as the design standard for A2Ls will already be in place. At that point, capacity will be the compromise when looking at available refrigerants on the market.

“The technology aligns with our existing architecture of distributed systems, and that allows an easy change over an extended period of time,” he said. “Our engineering skill base is very familiar with the technology, because we already use A3 systems within our stores on small plug-in units, and the A2L standard aligns quite quickly and neatly with that.”

Of course, when moving to a mildly flammable refrigerant, safety became a top concern; however, as Churchyard pointed out, lower flammability refrigerants are very difficult to ignite.

“Through design and limiting charge volumes and meeting the regulations, so long as you cannot create an explosive atmosphere, there is no risk,” he said. “But you must make sure that the appropriate assessments and design standards can prove that you can't create this atmosphere.”

Still, when looking at any type of refrigerant, the detailed assessment is critically important, said Churchyard. “Dangerous substance regulation for an explosive atmosphere is at the top of our agenda, whether it's an A3 or an A2L refrigerant. These assessments force us to delve into the minute detail of every component that goes into a refrigeration system to understand what it is we need to do from a safety design perspective.”

All in all, the move to a distributed refrigeration architecture that utilizes an A2L refrigerant has been successful, said Churchyard. The company has experienced a 94% reduction in emissions over an extended period of time and a 20% energy savings, when taking into consideration the holistic design of the systems.

“We are seeing enhanced performance of HFOs in high ambient conditions, which not even the refrigerant manufacturers had assessed at the time,” he said. “We take a hybrid approach, so those display case and plant designs that we've created are equally compatible with an HFO design standard and an HFC design standard, meaning that we can spread the cost of investment over a period of time. When we look at both direct and indirect emissions from energy and refrigerant leakage, we see that HFOs have been the best option for us.”