Or he thought he did. The plane’s account is @AirForce1. Trump entered the handle @AirForceOne_HQ. That is the Twitter account for a commercial HVAC contractor in Ohio. Trump was far from the first person to ever make the mistake, but he was definitely the one with the highest profile.

Greg Guy, CEO of Air Force One (the HVAC company), was halfway between Zion National Park and Park City, Utah, when an old friend called to tell him about the mix-up. Guy was unsure what to make of it after hanging up when his marketing manager called. News outlets were calling from across the country seeking a comment.

Anything connected with politics carries risk these days, and Guy wanted to avoid polarizing people. Instead, he decided to have fun with the situation. He responded that if the White House was ever interested in a quote for an HVAC upgrade, Air Force One was all in.

“I thought it was an opportunity to have a chuckle,” Guy said.

A few weeks later, Guy continued getting questions about his brush with fame. He said about 10 people at a charity golf event asked him about it. Not surprisingly, Air Force One experienced a pop in its social media profile as well. Guy said his team had actually set a fairly ambitious goal at the start of the year for raising its social media numbers.

“It’s safe to say we blew those out of the water,” he said. 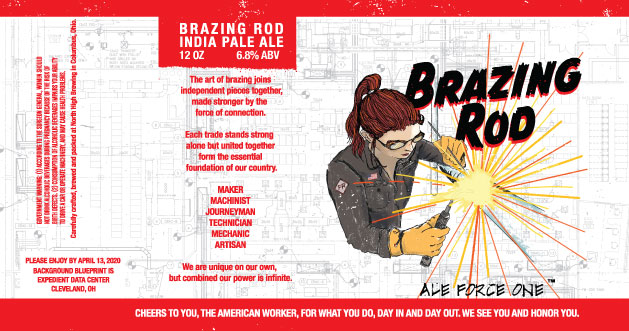 BEER SUMMIT: Air Force One’s microbrews are designed to get people talking about the trades.

The company’s unusual name comes from Bill Guy, Greg Guy’s father, who started Air Force One in Dublin, Ohio, in 1984. Guy said his father wanted a name to reflect when the company did and how it operated — as one. Bill Guy believed in teamwork, Greg Guy said. The company maintains that spirit even as it’s grown to seven locations. Guy said he tries to avoid internal competition. Air Force One works on a non-commission basis and offers a profit-sharing plan.

Guy said he hopes some of the conversations started by the event lead to new business. If nothing else, it’s one more way for the company to gain more attention, a constant focus for the CEO. Guy wants to promote both his company and the commercial HVAC industry in general. He especially wants to get more young people thinking about a career in the trades.

Guy recently partnered with North High Brewing Co. in Dublin to produce Ale Force One. Air Force One staff give out these microbrews to clients, vendors, and others as a way to get people talking about the HVAC business. There are currently three versions — Pipe Wrench, Brazing Rod, and Resilience. Guy plans on adding a root beer version to hand out to minors.