HVAC Contractors Get Comfortable With Zoning

Dick Foster, president of ZoneFirst, points to 11 million furnaces, air conditioners, and heat pumps sold in 2019. Of those projects, how many included add-ons like a humidifier, air cleaner, HRV/ERV, UV lights, or zoning?

“Typically no more than 10 percent for some of those, and well less than 5 percent for zoning,” he said. That may seem like a small number, given how many people do not enjoy proper comfort in one part of their home or another.

Rick Wilson, director of sales and marketing for Arzel Zoning Technology, says the basic pitch — on top of potential energy savings — is straightforward.

“All contractors have to do is offer it as a comfort solution. Explain that there is typically no maintenance, some have lifetime warranties, are quiet, and cost less than other alternatives.”

Foster observed that doing a changeout is the easiest time to sell and for the homeowner to buy zoning. Yet the topic often goes unmentioned. If uncomfortable areas develop, Foster explained, the homeowner “can buy a Snuggie for $19.99 or a cheap space heater” and simply try to live with a situation that could have been prevented, in many cases, alongside other HVAC work.

Wilson recommends a predictable start: ask if the homeowner is experiencing consistent hot or cold rooms or spaces. But he also recommends starting the process a little earlier.

“Look at the structure before going in,” he said. “Are there walls of windows that get full sun? Are there any fully shaded areas? Window a/c units?” 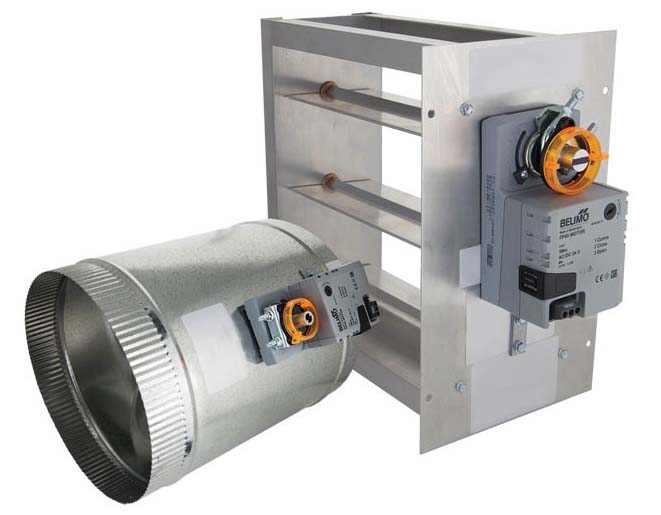 EVOLVING FOR SUCCESS: Three zoning manufacturers each listed different advancements in recent product releases. iO HVAC offers square and round dampers that can either come tailored to interact with other manufacturers’ controls or can take advantage of iO HVAC’s own Electronic Static Pressure (ESP) control technology, which is designed to eliminate the need for a conventional bypass damper while trimming installation time and cost.

“Any home that has the thermostat in the hallway is always a candidate for zoning, provided the contractor can access the ductwork,” he said. Duebel noted that another clear sign is whenever a homeowner mentions adjusting the temperature depending on which area of the home they are using.

Regarding the ductwork, Arzel’s Wilson added that “even if you don’t have access to every run, you can still zone the structure with specialty dampers.”

As one might expect, multilevel homes can inherently make good candidates to benefit from zoning. Duebel observed that a two-floor home can still see up to an 8- to 10-degree difference between downstairs and upstairs.

Contractors should also confirm if access allows zone dampers to go in either main trunks or branch runs serving all the intended zones. Duebel pointed out that wireless thermostat technology can often simplify what otherwise involves pulling thermostat wire to different levels.

As for the zoning design itself, Wilson noted that “sizing the zones is important and understanding basic airflow dynamics will help.”

Zonefirst’s Foster offered a tip for where to place the thermostat on a floor that gets a lot of use.

“Place the thermostat in the most used room on each floor, not the hall next to the return where no one occupies the area,” he advised. “Keep someone happy, versus no one.”

Zoning’s main challenge may have to do more with people and habits, but that hasn’t stopped the sector from making advances with the technology and the process.

Wilson cited equipment advances such as the increased use of ECM motors, allowing zoning to be installed even if the zones vary in size. 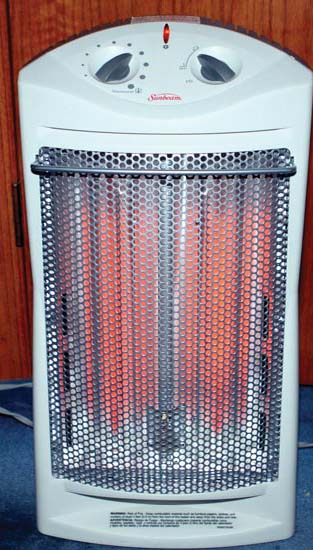 POWERS OF PERCEPTION: Space heaters, portable fans, and window units can suggest chronic weaknesses in a central air system. Make a habit of noticing those and any other subtle clues. PHOTO COURTESY HARDYPLANTS, CC0 1.0

Foster can reel off improvements from just the last several years.

“Pre-wired dampers, color-coded wiring terminals, damper test buttons on the zone panels, and easily visible damper position LEDs” take a lot of the guesswork and troubleshooting out of the equation.

“Time is money, and most of the cost of a zoning system is the labor cost of installation. We’ve reduced that substantially,” he said.

“Bypass is not always needed!” commented Wilson, who said it should mostly be used to cure objectionable air noise. Control of staging and an ECM motor to control blower speed can each reduce dependence on bypass.”

A contractor who takes 20 minutes to peruse some search results about zoning will find more than a couple of warnings about using bypass dampers as a default part of every zoning project. The caution is so common that one might wonder how some professionals keep getting it wrong.

Habit and lack of information can go a long way, though, even when it is the wrong way. 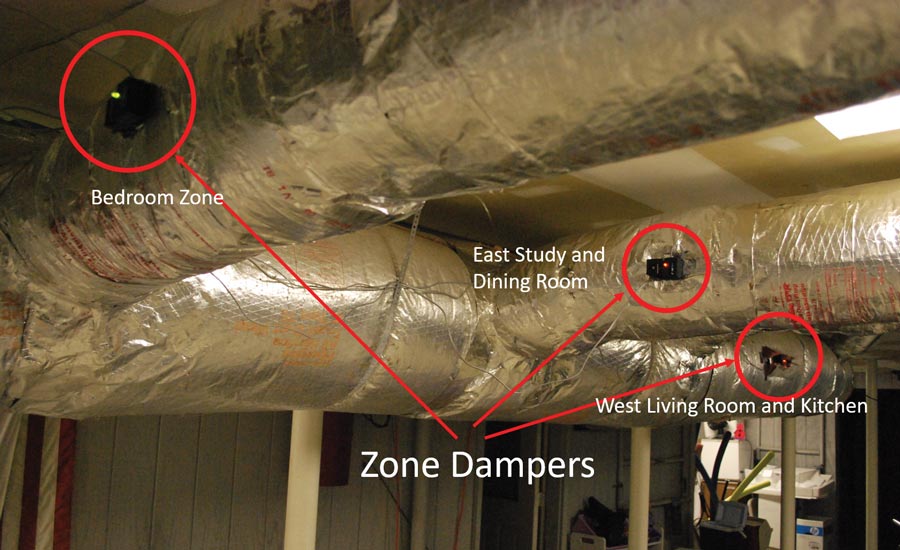 “Bypass is not always needed!” commented Wilson, who said it should mostly be used to cure objectionable air noise. Control of staging and an ECM motor to control blower speed can each reduce dependence on bypass, and in the bigger picture, “sizing the system correctly in the beginning can eliminate the need altogether.”

When contractors buy a bypass for every system, he said, it typically only increases the cost and the labor without improving the result.

Foster sees bypass-related problems “way too often,” he said. “According to NATE, some of the lowest scores on NATE tests are about airflow. The overuse of flex duct contributes heavily to poor airflow, even without zoning. The consequences are poor airflow, loss of efficiency, noise, sweating ducts, etc. This is why zoning gets a bad rap.”

Today’s zoning panels, he added, “have discharge air sensor inputs to prevent coil freeze-up or tripping on safety limit due to excessive bypass.” That said, he does point to his company’s ESP approach as an alternative to traditional bypass.

Both Duebel and Foster specifically called out the existing ACCA manuals as resources contractors can easily use to inform their designs and decisions.

Homeowners who have heard of zoning can still have their own preconceptions or misconception to overcome. 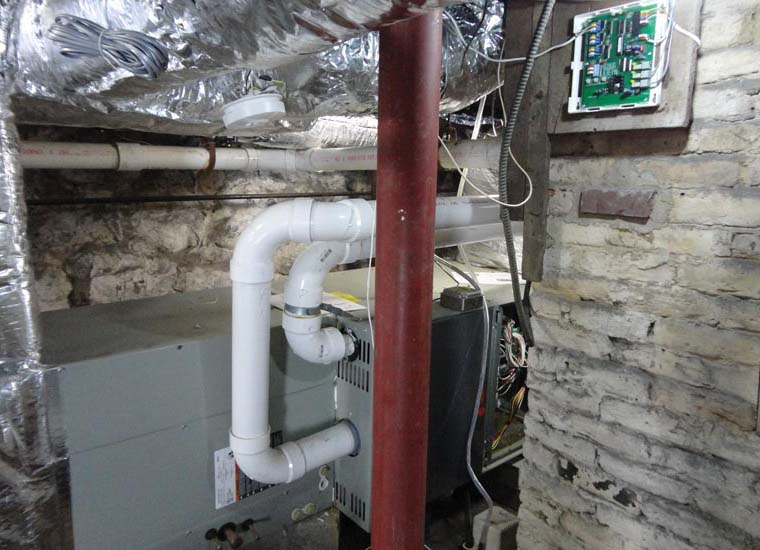 IN PLACE: A three-zone panel is mounted near the furnace in a crawl space application. PHOTO COURTESY ZONEFIRST

Wilson listed “complicated” and “costly” as the two misconceptions he hears most often. He lets homeowners know that “when explained and designed correctly, most can be installed in less than a day, save energy, and make the structure more comfortable while adding value to the house.”

Wilson called out another hot subject that can tie into zoning: IAQ.

“IAQ is one of the fastest-growing market segments and a concern to many home and business owners,” he said. “It’s very easy to sell when it is offered as a solution to indoor air quality. For instance, the correct sleeping temperature helps ensure a good night’s sleep, and people who sleep well are usually happier, more productive, and feel better.”

When offered, he said, two out of three customers will buy zoning.

Dubell observed that some homeowners associate zoning strongly with energy conservation, so it is important to manage expectations by providing context. 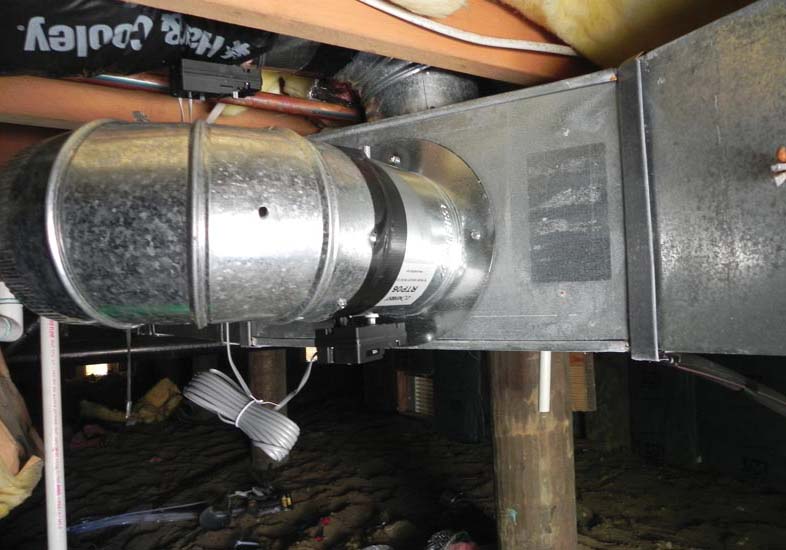 “Energy savings can certainly be a benefit,” he said, “but there are multiple variables that play into the savings portion,” including programmable thermostats and multistage equipment.

Dubell sees consumers as becoming more educated on this subject right along with other HVAC topics thanks to the internet. This, along with technicians prepared to educate customers, can close a knowledge gap where homeowners are commonly given much less info about their HVAC options “as compared to picking and choosing kitchen cabinets, fixtures, countertops, flooring, etc.”

He says iO HVAC Controls seeks to complement these dynamics through its own direct marketing.

“An unfortunate truth is that some builders simply won’t support zoning, but we aim to change that.”

Wilson sees zoning as a way to offer a whole-home comfort solution to customers. Foster acknowledged that other contractors can, by comparing the cost of zoning to that of alternatives for tackling a problematic room or area, establish themselves as a “price leader” in their market if that is desirable. He concluded his reply by reiterating a theme that came up for more than one scenario.

“Zoning can do that.”

Zoning Training: Get On Board

All three of the manufacturers quoted in this article invest in training and support for contractors who might profit from integrating zoning into their businesses.

“Happy customers are much more likely to refer potential clients,” he noted, seeing the domino effect that a properly trained technician can have when good work avoids just one callback.

In addition, Arzel offers a free proposal app for sales staff to use. The tool generates good/better/best proposals, making it easier to sell and close more deals, according to Wilson.

Foster reported that ZoneFirst can provide individualized online, in-shop, or on-the-job installation training for a contractor. The company also has a toll-free customer support number.

“I started one of the industry’s first toll-free tech lines, the Trol-A-Temp Answer Man in 1975,” he recalled, “where I spoke with tens of thousands of on-the-job installers” who had questions on duct system design, sizing, controls, and more.

Today, Foster can also coordinate contractor group training with wholesalers. For him and others, 21st-century tech offers its own upside.

“Today’s smartphones, sending pics or even video Facetime feeds, put us right next to the installer on the job.”

“If a contractor or wholesaler has a specific training need,” he said, “we’ll do a one-on-one webinar with them, or we can arrange to go on-site and train them.”