HVAC Contractors Get Into the Zone

Contractors and HVAC technicians can create a wealth of opportunities by adding residential HVAC zoning to their list of services.

The majority of HVAC shops don’t offer zoning, even though many residences are plagued by marked temperature differences and, according to the National Comfort Institute, about 76% of homeowners are unhappy with some aspect of their home’s comfort level.

However, only a small percentage of HVAC systems are zoned. To illustrate: In 2020, more than 12.7 million air conditioners, heat pumps, and warm-air furnaces were shipped, according to the Air-Conditioning, Heating, and Refrigeration Institute (AHRI). But fewer than a half-million zoning systems are sold in a typical year, according to Dick Foster, president of ZoneFirst, a pioneering zoning products company.

“Contractors are not known for running with new products,” said Foster, an unabashed advocate for HVAC zoning. “They sell boxes. They’re not big on accessories.” (Zoning technology isn’t exactly new, though; ZoneFirst has its roots in the 1950s.)

A majority of the HVAC distributors that work with ZoneFirst, Foster said, have only a handful of contractor customers that offer zoning, and most of that is in new construction. But zoning can be installed in existing forced-air systems as well as in new construction, and companies like Arzel, ZoneFirst, and EWC Controls have resources for contractors and technicians who are curious about it.

Mike Reilly, the president of EWC Controls Inc., said that among the contractors the company trains in zoning, about 70% have not offered it before. The other 30%, he said, are looking to refresh and update their skills and/or learn new technology and new techniques.

Simply adding zoning installations to their technicians’ skill sets, however, won’t guarantee contractors new business. Contractors should be willing to start conversations about zoning — and prepared to answer questions from homeowners who typically aren’t aware of it.

Here are some of the more common questions about zoning that contractors might hear, along with answers provided by experts Foster, MacCartney, and Reilly:

What is HVAC zoning, and how can it benefit me and improve the comfort of my home?

Zoning allows people to set heating and air-conditioning temperatures in forced-air systems at different levels in different areas, or zones, in their homes. Zoning can save energy — and utility costs — when used to condition only the air going to the zones being used at a given time.

Experts have a favorite analogy to illustrate this point: a home’s lighting system.

“When you come home and you flip on the light switch, it doesn’t turn your whole house on,” as MacCartney put it.

A thermostat to control each zone can help limit a home’s hot spots and cold spots as well as reduce quarrels over thermostat settings.

“Having a thermostat in each zone will provide optimal comfort by putting heating or cooling only to the zone needing it.”
-Dick Foster
President, Zonefirst

Tell me more about how energy savings are achieved.

Savings are achieved when heating or cooling is turned back, or shut off altogether, in zones that are not occupied, then set at a more comfortable level when they’re being used.

“Each room has a different load, and with upstairs warm air rising, cold air falling, a thermostat in the middle cannot control these two extremes,” said Foster. “Having a thermostat in each zone will provide optimal comfort by putting heating or cooling only to the zone needing it.”

Are there any drawbacks to zoning?

“Typically when it doesn’t work as expected, it’s due to outside obstacles,” such as inadequate ductwork, said MacCartney.

What kind of equipment needs to be installed to zone my HVAC system? Will I need two air conditioners and two furnaces?

One furnace and one air conditioner should do the trick. With today’s building techniques and energy-saving insulation, said Foster, that’s true even for larger new homes.

Zoning typically relies on dampers in the ductwork, a thermostat in each zone, and a control panel for the entire system. 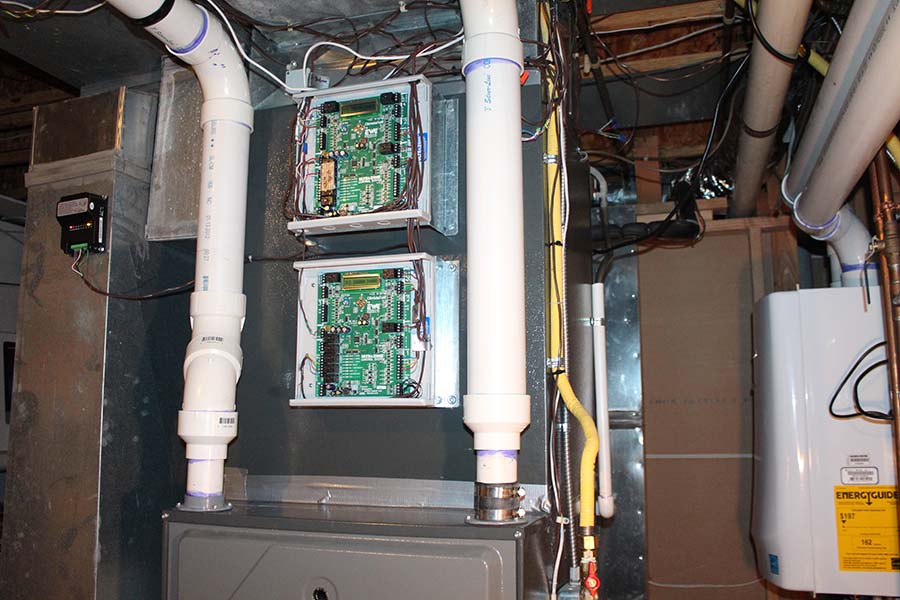 “With new construction, the installer has more options open to him than in retrofit, but the equipment does not change,” said Reilly.

Zoning an existing system, which will typically have one main supply duct and at least one branch supply duct for each room, means installing dampers in the branches, with all of dampers in each zone connected to the thermostat for that zone, said MacCartney. Dampers can be spliced into the ductwork; when ducts are hidden behind drywall or otherwise hard to access, dampers that can be inserted through registers, or even installed on the registers, are available.

In new construction, or in installations in which ductwork is to be replaced or modified, contractors can install one main supply duct for each zone, and those trunks, instead of the branches, then get the dampers, MacCartney said. That means fewer dampers overall.

Retrofitting zoning into my HVAC system seems like a big outlay. How long will it take for the energy savings to make up that expense?

Retrofitting three zones into an existing HVAC system in a two-story, 2,000-square-foot house will cost roughly $3,000, said Foster. That could run into more if ductwork is hard to access.

But, experts said, depending on user habits, energy savings could reach 30% percent or more, and the cost of a retrofit could be recovered in five to seven years.

“In addition to the added comfort of a zoning system, the energy savings that are provided to the homeowner is the benefit that is hard to ignore,” said Reilly.

I have a smaller home — about 1,000 square feet. Is zoning worthwhile?

“The size of the home doesn’t matter, it’s the fact you’re getting better temperature control and comfort while saving energy (by) not conditioning the whole house,” said Foster. In “90% of smaller homes, two zones make so much sense,” he added.

MacCartney and Reilly were a bit more conservative, saying that zoning may not be right for some smaller homes.

“Zoning has its place and can provide exceptional comfort and energy savings, but that is typically in larger homes with multiple levels or sprawling ranch footprints,” said Reilly. At times, HVAC options other than zoning are better for meeting homeowner needs, he said.

I have a larger home — two stories plus a basement and more than 3,000 square feet. Should I consider more than two zones?

Yes. Design a zoning system around the occupants’ needs and habits, not just around the square footage.

“Decide the zones based on how you live in the house. Where do you spend most of your time during the daytime hours, during the nighttime? What about children and entertaining?” said Reilly. “Once the homeowner understands how they want the house to perform, then we can lay out a zoning system to best fit their comfort demands.”

Foster said Zonefirst typically suggests that each zone be between 500 and 700 square feet, but that that can vary depending on the layout of the rooms, the way they’re used, and the commonality of loads.

“It’s really going to depend on the customer and their needs,” said MacCartney. One customer might not be concerned about fully conditioning a basement, for example, while another has a basement man-cave that he wants to keep comfortable, MacCartney said. “There’s no cookie-cutter situation.”