This website requires certain cookies to work and uses other cookies to help you have the best experience. By visiting this website, certain cookies have already been set, which you may delete and block. By closing this message or continuing to use our site, you agree to the use of cookies. Visit our updated privacy and cookie policy to learn more.
Home » Contractors of the Year Present a Positive Image of the HVAC Industry
Service & MaintenanceHVAC Residential MarketHVAC Commercial Market

Firms promote the trade, seek to help others grow

ACCA presents the award annually to “a contracting company that demonstrates an extraordinary commitment to contractor excellence.” Finalists are judged on a range of qualities, including community involvement, industry involvement, and a commitment to training and certifications. A panel of ACCA past chairmen judge the finalists and select the ACCA Contractor of the Year (COTY) winners.

The Pierces started their business in 2001. Clay Pierce had been working for another contractor as an installer/service tech. Jen Pierce was in pharmaceutical sales, a career she continued for a few years after they started the firm.

Jen Pierce said working as a pharmaceutical sales rep was similar to running her own business. It’s a relationship business, so she knew how to work with a variety of personalities. Today, Jen Pierce functions as the general manager, overseeing the general operations of the business. Clay Pierce works mostly as a customer consultant and assists with the more technical installations. 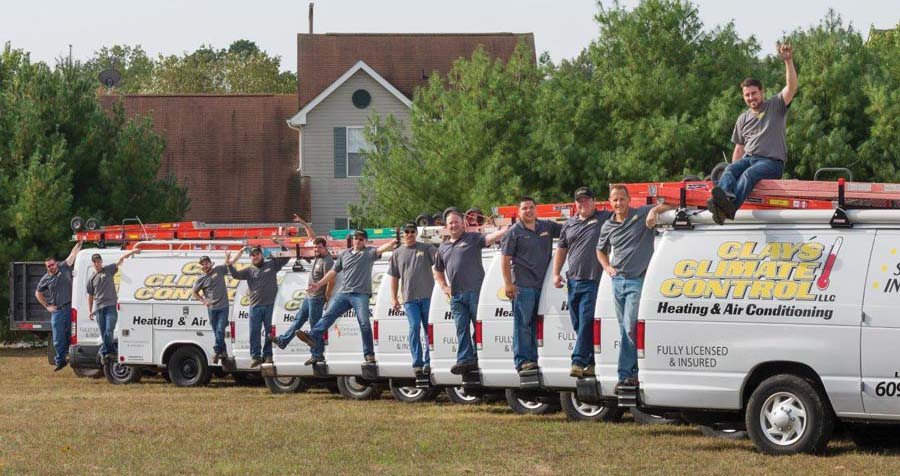 WORK AND PLAY: Clay’s Climate Control technicians enjoy a playful moment. The company puts a lot of effort into ensuring its employees know they are appreciated.

Clay’s employs 32 people and services 1,500 maintenance contracts. When they started the business, the Pierces focused on installation, doing service out of necessity. Jen Pierce said they grew to understand how important the service side of the business is when they started to learn more about the industry. Installation still makes up most of their business, but they do a lot more service work now than when they first started.

The company did about $5.8 million in sales last year. The Pierces set goals for their business each year in revenue and profit, as well as in maintenance agreement growth. They hope to grow this year by 17 percent.

One of the main criteria for the COTY award is how the contractors treat their employees. The Pierces focus on showing their employees how much they are appreciated. They aim to foster an environment of professionalism, respect, and high-quality workmanship. This last aspect creates a sense of pride in the work that employees do, Jen Pierce said. 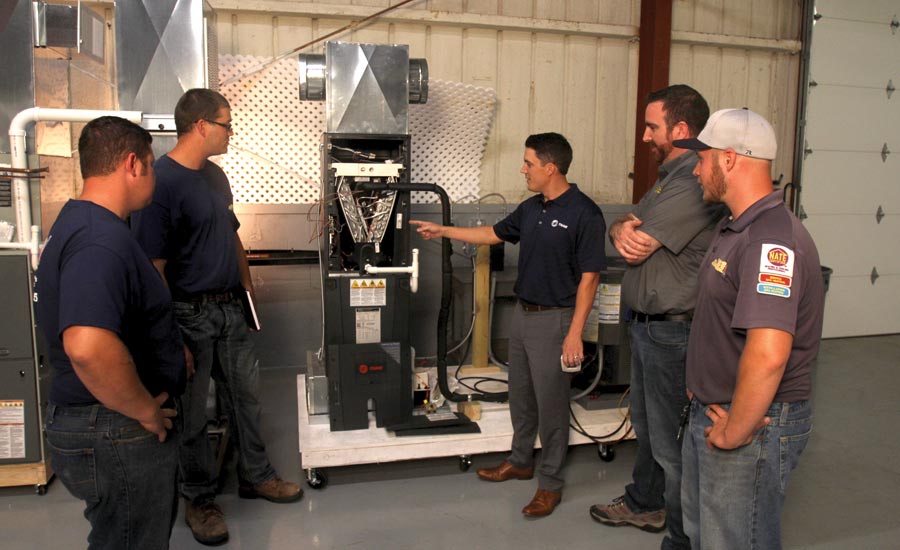 NOW YOU KNOW: Clay’s Climate Control technicians undergo training. The company focuses on cultural fit over experience and then invests in training.

To ensure quality workmanship, Clay’s dedicates resources to training. Because the company was a start-up, Jen Pierce said Clay’s has always faced a labor shortage. They had to learn how to train and attract employees.

Clay’s is active in its community, both in charity activity and in sponsoring sports and school events. It is part of the Structured Learning Experience, a program that brings in high school students for a half-day of immersion to see if HVAC might prove a good career choice. Clay’s also attends all local high school job fairs. They bring along the virtual reality headset used for training to draw in interested students.

Clay’s has been an ACCA member since 2011. Jen Pierce said she realized at the time that the business had a lot of untapped potential, but she lacked a resource where she could take her questions. That’s when she found ACCA. At first, she mainly used the association as a basic resource. Then the Pierces joined the ResPro MIX Group, one of ACCA’s peer groups, in 2014.

“The MIX group really opened our eyes to everything ACCA could offer,” Jen Pierce said.

They started attending various events, including the annual conference.

“By getting involved with the conference and networking, we learned so much about how to run a stable, professional, effective business,” Jen Pierce said. “The MIX group itself is completely invaluable.”

Now they are giving back to the association. Jen Pierce is set to join the board this year. She said she wants especially to help small companies as they grow.

“Because ACCA has done so much for our business, I wanted to get more involved to help others in their businesses,” she said. “I don’t think we’d be the business we are today if we hadn’t joined ACCA. We’d still be trying to figure out everything on our own.”

LC Anderson was founded in 1943 by Leslie Anderson. Anderson ran the company until 1970, when he sold it to Ed Johnson and Paul Baker, two of his employees. In 1995, it was purchased by Warren Hudson, who was a sales manager for Distributor Corp. of New England, a Carrier rep. 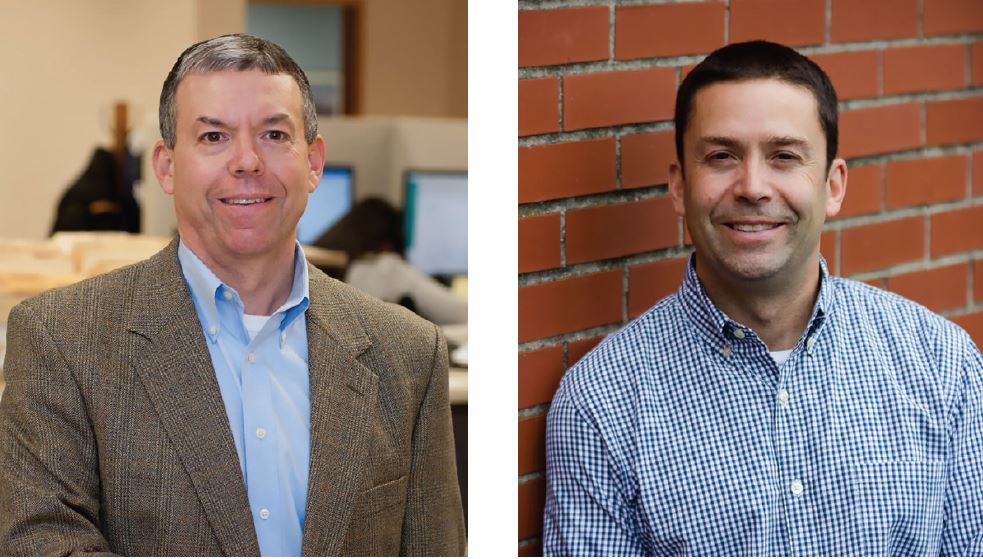 “He just wanted to get into the contracting side of the business,” Kurt Hudson said. “He had a couple of companies that he knew well, and LC Anderson was one of them.”

Half of LC Anderson’s revenue comes from new construction, with the other half from service and retrofits. Last year was a very busy construction year in the Boston market. The firm saw a 30 percent increase in sales over what had been their biggest year. 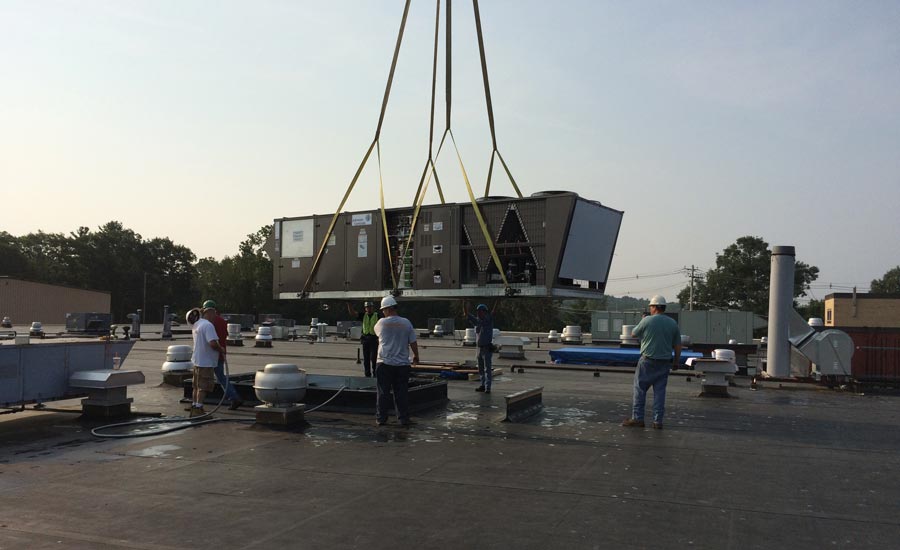 BOOMTOWN: LC Anderson staff work on a large rooftop project. The construction boom in the Boston area provides plenty of work these days.

The Hudsons have been involved with ACCA for more than 20 years.

“One of the first things I did when I got here was attend the ACCA conference,” Kurt Hudson said.

He said the MIX group experience has been especially helpful in the company’s growth.

“They really know who you are, and we’ll challenge each other and help each other,” Kurt Hudson said. “Whatever it takes to keep our businesses moving forward.”

One way LC Anderson takes care of its employees is providing a corporate chaplain. The chaplain comes from an outside organization and attends company events. He offers private sessions with employees to discuss personal issues, sometimes visiting them at home or even in the hospital. 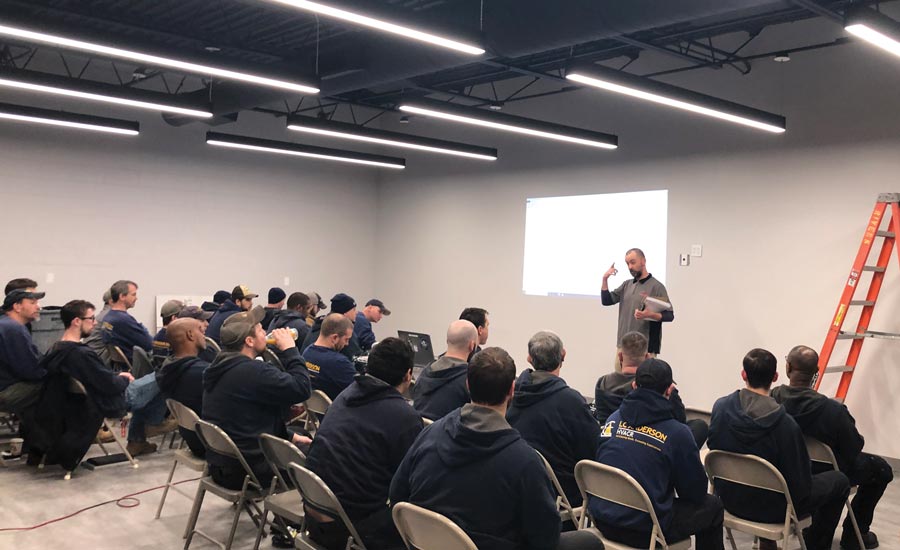 The Hudsons also take care of their employees’ physical well-being through a culture that promotes safety. They try to make safety visible everywhere in the company, Kurt Hudson said. Any meeting with field staff always covers a safety event from the news. An outside safety consultancy helps with safety training and provides safety inspections. Karl Hudson said the consultancy acts as an OSHA inspector and will write an internal report if they spot a problem.

To promote the industry to the next generation, the Hudsons are involved with trade schools, technical colleges, and four-year colleges. Kurt Hudson takes a personal approach and speaks at his children’s middle school career day.

“It’s not just working with your hands,” he continued. “You could have an office position or a project management position. There’s a lot of different ways to go, and we need to expose younger people to the idea that it is a viable alternative.”