Today, smart technology is becoming more and more popular. People are looking for complete control over their lives, whether that’s a smartphone, a smart thermostat, smart technology in their car, or something else entirely. Ecoer sees this trend, and the manufacturer is looking to offer people its heat pump and its accompanying smart technology.

Established in 2016, Ecoer has grown to locations in three countries: the United States, Japan, and China. The U.S. houses the headquarters, Japan houses software development, and China houses mechanical and systems engineering, along with manufacturing.

Now, in 2020, the company continues to offer HVAC solutions built to be used with IoT technology for remote diagnostics, system monitoring, and troubleshooting.

“We’re a technology-based company that happens to manufacture a heat pump,” said Rick Warner, vice president and general manager for Ecoer. At the 2020 AHR Expo, Ecoer dedicated its booth space to showing off both its heat pump and its accompanying smart technology.

The ESI Series heat pump features inverter technology, is variable capacity, and is offered in two different sizes with ratings up to 20 SEER and 10 HSPF. Most importantly in Warner’s opinion is the smart technology that Ecoer has incorporated into the heat pump. 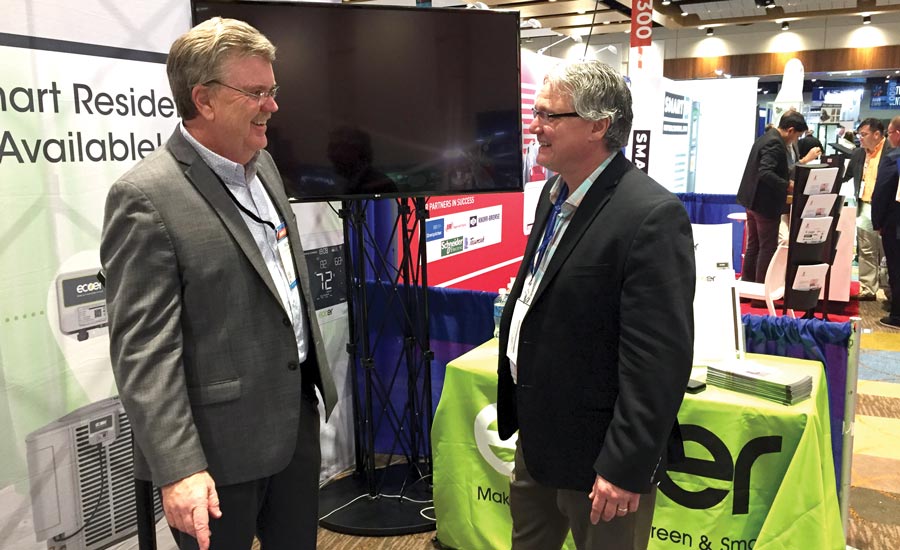 “The heat pump is hooked to LTE communications to a cloud, so that we can monitor real time performance 24/7,” Warner said. “We are a technology company that is evolved in cellular data and we said, “Hey, there’s opportunity on the HVAC side of the business. Bring in that.’ We brought in HVAC people, tied them together with the technology people, and it worked.”

“No. 1, the technician can set the system up to the highest efficiency automatically,” he said. “There’s no human error. The technology takes care of it.” In addition to that, if there’s a problem with the unit, the Smart Service System will automatically contact the contractor who installed it and the Ecoer technical support team. Along with the notification, the system will point out what is wrong with the heat pump.

“It diagnoses itself, and we can go in there, the contractor or our tech support team, and we can verify, ‘Yeah, that’s your problem, go and take this part and fix it,’” he said. “So we can save that service call and the homeowner doesn’t have to get involved in it.”

According to Ecoer’s website, the Smart Service System can provide alerts when the refrigerant level is incorrect (or if there’s a leak), when a filter needs cleaning or replacing, or when the system or an individual component fails, identifying what the specific problem is.

Warner said that the response from contractors has been excellent.

“It’s probably because of the setup capabilities when you’re first installing it with our technology, that it makes it so that installation error is almost impossible,” he said.

The Smart Service System also connects with the Smart Service Pro App 2.0, allowing for the system to be monitored and troubleshot remotely. The system collects real time and historical data on cooling/heating capacity, system status of pressure and temperature, and system faults.

“The homeowners are loving the peace of mind, since they know that somebody’s watching their system for them if there’s a problem,” he said.

As smart technology continues to grow within the HVAC industry, Warner said that Ecoer is leading the way through its gateway and real time monitoring of the customer’s system. Ecoer plans to expand its current product offering. Warner said that it has a heat pump that can be used as an air conditioner; matching coils and matching air handlers; and a furnace that will be coming out this year.