Geometry class survivors might recall that each square is a rhombus (with four equal sides), but not every rhombus is a square (with perpendicular angles). The definition of a rhombus casts a wider net. Those quadrilaterals can resemble a diamond, for instance, or involve a much wider array of angles.

But a square? Ninety degrees at every turn. No flexibility. No exceptions.

Discussions with three major manufacturers make one thing clear: the sector’s capabilities have moved well beyond the confines of “ductless” — and beyond the simple wall unit. As a result, today’s contractors and consumers often use a word that makes this inverter-based category sound more like a square.

Homeowners will more frequently turn into happy customers if they come to understand that they can, in fact, have a rhombus — a system tailored for the previously forbidding angles of their own spaces.

And who doesn’t want to sell more rhombi?

This movement and growth is taking place both in terms of the equipment’s technology and design and, related, where it gets used.

“We’ve moved beyond ‘ductless’ and are focusing on the specific needs of the zone,” said Michelle Robb, director of marketing for Mitsubishi Electric Trane HVAC US (METUS). Citing METUS’ Zoned Comfort Solutions®, the company reports growth in both replacement and new construction markets.

“We can add value to an air-handler replacement job by adding a ductless unit to fix a problem zone, like a bedroom at the far end of the duct run,” she explained. “Both units can be connected to a multi-zone outdoor unit.”

Low-profile ducted units fit into tighter envelopes, while the company recently decreased the height of its SVZ multi-position air handler to ease installations as well.

Robb reports that the model “has other enhancements like an encased EC fan motor with forward curved blower to reduce operating sound levels, as well as improvements to the cabinet design for higher corrosion resistance.”

Asked for shifts that he has observed in this area, Panasonic national sales manager Eric Griffin noted a rise in multifamily applications. He is likewise “seeing a rise in using a multiposition ducted air handler in the common areas of a home and then using smaller wall or ducted units for rooms that are to be zoned” to maximize comfort and efficiency, he said.

Panasonic’s lineup includes seven different ducted indoor units, ranging from 5,000 to 36,000 Btu. He also relayed that more commercial applications, like added office spaces, are taking advantage of the technology via the larger units.

At Daikin North America LLC, senior product manager Connie Schroder put the trend in plain terms. The technology, she said, continues to grow at the fastest pace of all residential systems.

“In fact,” she added, “the term ‘ductless’ or ‘non-ducted’ has become even more gray over the past year and will continue to become less definite,” due to the ways newer options can combine with ducted systems.

Daikin, she said, “first crossed this bridge” in 2018, offering single outdoor units that could connect up to nine indoor units, with a mix of ducted or non-ducted indoor models including traditional, ducted gas furnaces.

Schroder said that the industry’s “miscategorization,” as she termed it, has led to a first perception of wall mount units only, despite recessed wall and ceiling options. On the visible side, the company has introduced a line of EMURA wall units that offer a sleeker design in matte white or silver finish.

The chance of the equipment working as designed tends to track pretty proportionally with whether a unit receives a good installation.

Moreover, Griffin said, “it helps position your company in the market.”

In addition to Panasonic’s own training centers, affiliated distributors who are dedicated to this market offer live training, and some have made short videos for on-demand viewing. Panasonic also conducts monthly training webinars to make it easy to ask questions and to reach techs who may not be able to attend in-person events.

One key, both in terms of evolving contractor demands and manufacturer reaction, is the speed of feedback to techs in the field who have encountered an issue. Griffin noted that the ongoing growth of “ductless” means that more and more techs within a company have the experience to help out a coworker. As a result, he said, Panasonic sees low incidents of service issues.

METUS not only also cultivates a network of distributor-provided training, but it has expanded its roster of physical training centers with a fairly recent and high-profile addition on 7th Avenue in midtown Manhattan. The showcase facility allows many professionals from around the region the chance to attend formal training and get hands-on experience with the latest models.

Robb added that those who are not quite so close to a location can take advantage of the manufacturer’s Learning Management System, which “offers video content as well as curated resources tailored to each individual user.”

Most importantly, Robb conveys the company’s belief that greater contractor confidence in selling, installing, and servicing will translate to greater adoption and customer satisfaction.

When asked about the biggest advancement for this year, all three representatives referenced the increasing ability to perform for occupants who encounter more extreme winters.

Beyond that, Schroder pointed out that this kind of progress is not the result of a single advancement. Rather, she emphasized, the increased performance ranges in the company’s offerings stem from developments for heat pump systems’ inverter compressors, fan motors, heat exchanger, and refrigerant control technology.

Mitsubishi plans to add a single-zone 2-ton Hyper-Heating INVERTER® (H2i) P-series model for those cold-weather customers, Robb said, with the hyper-heating capability destined to spread through the product line.

“Improving our controls and management programs is just as important to us as the advancements to our equipment,” she added.

To that end, METUS will continue updating tools like Sales Builder Pro, BuildingConnect+, kumo cloud®, and more to ease use for dealers and residents. 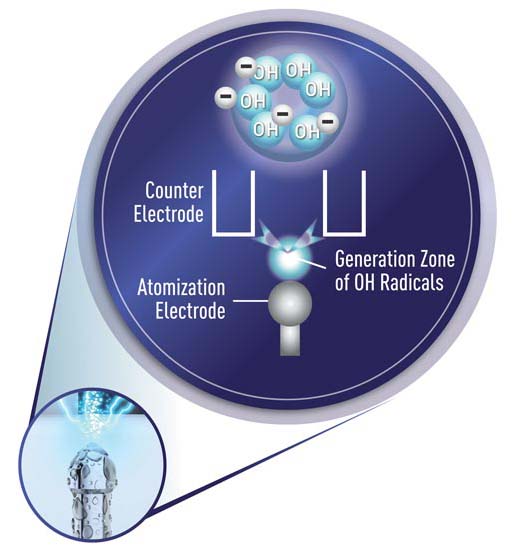 CHARGED WITH A MISSION: Panasonic’s nanoeX technology applies high voltage to water taken from the air. The designed effect: The resulting electrostatic ionized OH particles react to hydrogen in pollen, bacteria, viruses, and odor compounds, alter their nature in a beneficial way for occupants, and then return to the air as water.

Also for techs, METUS adjusted new cassette models and hinges to allow for simpler service from below. Some wall-mount and cassette models are receiving 3D i-see Sensor® capabilities for increased hands-free operation.

Panasonic, on the other hand, has invested substantial resources into nonoe™ X, a built-in air purification technology. The company sees indoor air quality as an increasing priority for homeowners. According to Griffin, this patented technology “produces nano-sized electrically charged water particles, which are dispersed through the air and are very effective at inhibiting pollutants and reducing odors.”

The company’s ClimaPure™ is meant to embody the cold-climate capability, Wi-Fi, and these IAQ advancements for a range of applications.

On the cold-weather front, the manufacturer now offers dual-fuel thermostats to work with oil and propane systems.

Turn the conversation toward the future and the role these manufacturers can play, and a couple of shared themes emerge.

“As the U.S. moves away from fossil fuels,” said METUS’ Robb, “we will be in a great position to replace those heating systems with our high-performance heat pumps.

Griffin noted that trend right away, too, observing that this equipment “has really caught the attention of the electrification movement.”

He sees Panasonic’s low ambient heat pumps as contributing to the effort and speculates that new refrigerant developments might improve offerings as well. In the meantime, Panasonic has begun to offer “solar panels, ventilation fans/ERV, and HVAC as a package” for projects, he said.

Schroder was enthusiastic about Daikin’s thermostats and their value to modern homeowners, stating that “proprietary smart thermostats offer the best of two worlds.”

First, as one might expect, they are “precisely tuned” to work with the proprietary equipment to work harmoniously. In addition, she noted, they can still “provide open Wi-Fi protocol needed to work with today’s smart home solutions” — which, as most any contractor can attest, continue to spread through neighborhoods daily.

The other common theme: more use in “tiny homes” and net zero homes. Panasonic’s solar-and-HVAC package deal represents an appeal to green-minded contractors and their clients. METUS likewise sees an uptick in zero-energy homes, with a portfolio including CEO Mark Kuntz’ residence, among others. Yet the tiny home and zero energy crowds probably spend a little more time reading up on the latest advancements than even today’s increasingly savvy general residential market.

So room remains for better-informed contractors to enlighten customers about the “ductless” sector that has evolved into a suite — when installed and termed properly — of increasingly versatile heat pump-based options, extras, and configurations.