Some kids have a tree house. Or maybe a rec room for hanging out after school, or a basement. In Texas’ Hays County, two teenage daughters might have outgrown those options, but they hit the hang-out jackpot: their own cozy, three-room tiny home.

The project team and client came up with a plan to repurpose materials on the family’s property while staying true to the area’s unofficial instruction to “Keep Austin Weird.” They would turn a repurposed shipping container up on its end and weld it to an old bison shed (contrary to the old song, only bison live in North America, not buffalo). One entire wall of the main space would be glass, and a ladder would lead to a smaller room with a pair of bunk beds.

On the other hand, the bedroom had no operable windows, there was a bathroom to consider, the main space had a kitchenette along one wall, and thanks to the wall-sized window, the abundant Texas sun would often pour into the living room.

So what about keeping the indoor environment comfortable enough that anyone would actually want to go there to study or relax?

Enter Chris Magee, product manager for ductless split systems/PTACs at Friedrich Air Conditioning. The local contractors on the job recommended Friedrich, and eventually, the project became the subject of an episode of FYI’s television series “You Can’t Turn That Into A House.”

But first, they had to earn strong ratings from the client. Even with the flexibility that ductless designs can offer, the nature of the space and its combination of steel and glass presented a design riddle to solve.

The first job in unraveling the right solution was selecting modern, exceptionally insulated windows and then ensuring that all the walls were well insulated. Next up, HVAC.

“In the shipping container section, we had to ensure that the unit can cool, heat, and dehumidify not only the living quarters but also the bathroom at the bottom,” Magee said. “For the second unit, we oversized a bit to ensure that the living room and kitchen would have enough capacity.”

Magee went with Friedrich’s three-zone multi outdoor and a pair of 9,000-Btu heads for the family, who had never used mini splits before. Due to the particular space, traditional wall units fit the bill. The real task, then, was nailing the details to cover multiple uses and floors in what was still quite a compact space. The team started with the upended storage container section, since it had the bedroom upstairs and bathroom under it. Making a couple of placement adjustments as they evaluated airflow needs, they hit on the right plan.

“Our solution was to mount the ductless system over the top bunk to allow the airflow to condition that section,” Magee said, “with some residual to the bath below.”

Over in the den, the lengthwise window wall remained, as did the kitchen area on the far wall opposite the bathroom/ladder/bedroom side.

“We added a second wall mount in the kitchen, facing the living/dining and into the bath, to provide whole-home comfort,” he said.

The resulting low-profile system delivers air distribution, cooling, and occasional heating as desired. The finished space now gives the two daughters a “home” where the bison once roamed. It comes in handy for larger family functions, too.

DATALOGGING IN THE WOODS

About 2,100 miles northwest of that Texas-sized tiny home, a new neighborhood grew up in the Tacoma neighborhood of Midland, Washington. 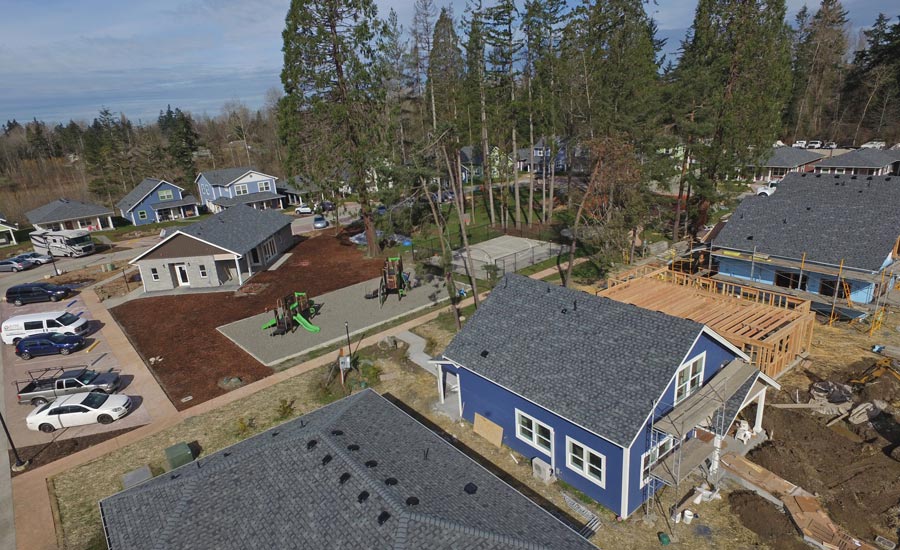 BETTER VIEW: As part of a research study, 20 Habitat for Humanity homes in The Woods at Golden Given in Midland, Washington, received air source heat pumps to perform on alternating weeks alongside the electric heating systems so popular in the region.

The Woods at Golden Given (aka, The Woods) expanded by a half dozen homes a year to its final size of 30 homes, thanks to Tacoma/Pierce County Habitat For Humanity. Per Habitat’s longstanding equation, individuals and companies volunteered their time and resources to build homes alongside new homeowner “sweat equity.”

These single-family homes range in size from 1,100 to 2,000 square feet. The rectangular neighborhood sits among a mix of old and new trees, with a community building, a playground, and a basketball court at its center.

“Unknown to visitors, the quaint neighborhood was also host to an in-depth energy use study that changed the Washington State Energy Code last year,” he said.

Vastyan explained that while working with the local utility, Tacoma Power, Habitat managers decided to install a hybrid electric heating system: zonal electric (either baseboard or fan-forced wall heaters) and a 12,000-Btu ductless mini split in each home. The 30 houses would all be built to meet the insulation requirements of the Washington code and would also be equipped with heat recovery ventilators (HRVs).

“So we essentially designed an experiment that would span two years,” Carter said, “in which the home would automatically switch from all resistance heat to a hybrid system that included a mini-split.”

Johnstone Supply pointed the team to Alpine Ductless LLC, a firm from nearby Olympia, whose sole focus is mini split installation and service.

The gradual nature of The Woods’ development and construction of the experiment’s 20 homes made for a slightly unconventional routine. Alpine Ductless supplied 12,000-Btuh Fujitsu RLS2 mini split systems up front. They went into storage, and then Alpine came back out whenever another home was ready for its mini split.

Even then, the Habitat process means that an installation progressed a little differently, too. 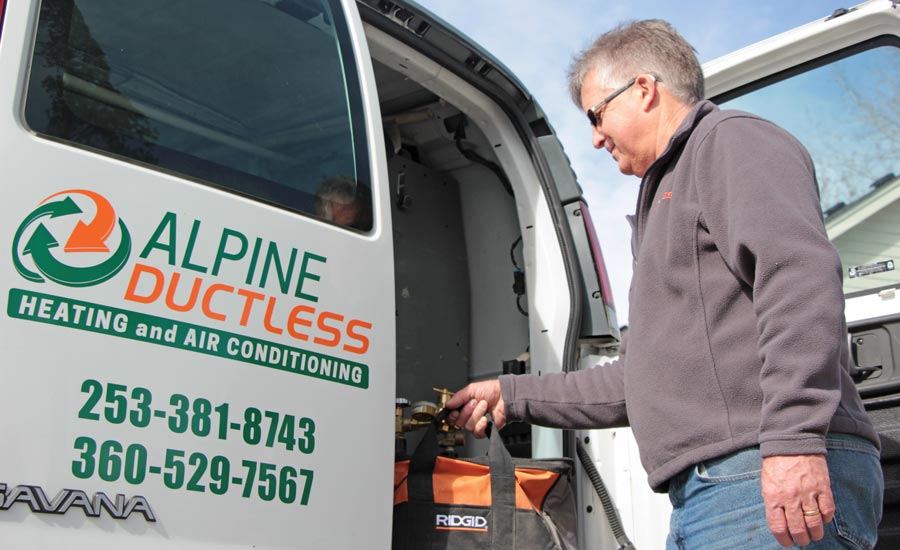 “Habitat employees or volunteers hang the wall-mount units and set the condensing unit,” Vastyan recalled. “Their electrician also completes the wiring. At that point, Alpine’s crew (led by co-owner Cory Eckert) arrives onsite to install and vacuum down line sets and commission the systems.”

Tacoma Power’s Carter consulted with Curt Kanemasu at manufacturer’s rep Cascade Products, and also with the Washington State University Energy Program (WSU-EP), as he cultivated the approach for controlling the experiment and monitoring its data.

Vastyan outlined how the time clock energized either the electric resistance heaters or the mini split in the living room on sequential weeks. Monitoring was conducted through a series of current transducers, data loggers, and temperature sensors that captured electrical consumption on each circuit, indoor and outdoor temperature, and the heat pump’s line set temperature.

The team only concerned itself with collecting heating data. In warmer months, the Fujitsu units provided air conditioning, aided by the Fantech Flex 100 HRV units.

WSU-EP wound up partnering on the installation and monitoring and then coordinated independent evaluation of the data.

“What we found was that the houses at The Woods used between 40 and 48 percent less power in hybrid heating mode,” said Carter. “We also found that, from a comfort standpoint, homeowners preferred the heat pump over the baseboard or wall heaters.”

Tacoma Power used those findings to effect updates in the Washington State Energy Code. Now, Carter recounted, “all new zonal-electric heated homes in the state of Washington — not just Habitat homes — are required to have a ductless heat pump in the main living area.”

Alpine Ductless’ Eckert pointed out that the resulting difference would be even greater in homes with higher infiltration rates or larger heating loads.

Even without the prep work of a Habitat crew, “we’re able to quickly install these units, offset the customer’s power consumption, and make them extremely comfortable,” Eckert said.

Alpine Ductless has completed more than 1,400 mini split installations in electric heat homes. Eckert figures that similar savings for that many homes would equal all the electricity needs of a 650-lot subdivision of 1,200-square-foot homes.

Others can ponder whether or not a tree falling in the woods really makes a sound if nobody hears it. However, if 20 heat pumps make a significant (and properly monitored) energy difference in The Woods, it turns out that the results can reverberate far beyond one small neighborhood.

Special thanks to Dan Vastyan for reporting that contributed to this article.