Last summer at the White House, ACCA leadership joined representatives from HVAC manufacturers and other businesses to commemorate the first anniversary of the Trump administration’s Pledge to America’s Workers. In that pledge, ACCA members promised a total of 75,000 training opportunities toward the program’s overall total at the time, described by President Trump as “12 million pledged commitments” across a range of industries.

Several months later, three ACCA contractors checked in with updates on their efforts and progress so far.

Stack Heating Cooling & Electric started to build its commitment to training in a literal sense around 10 years ago. President and CEO Brian Stack recalled the 800-square-foot, in-house training center and classroom.

“We would hold classes for our technicians on a regular basis, but it wasn’t as structured as we would have liked.”

Skip to 2017, and the company decided it would hire a full-time training director. Stack also wanted to develop a program that would allow the techs to move up through defined tech levels. Those plans developed, along with Stack’s decision to join the Pledge to America’s Workers in 2019. 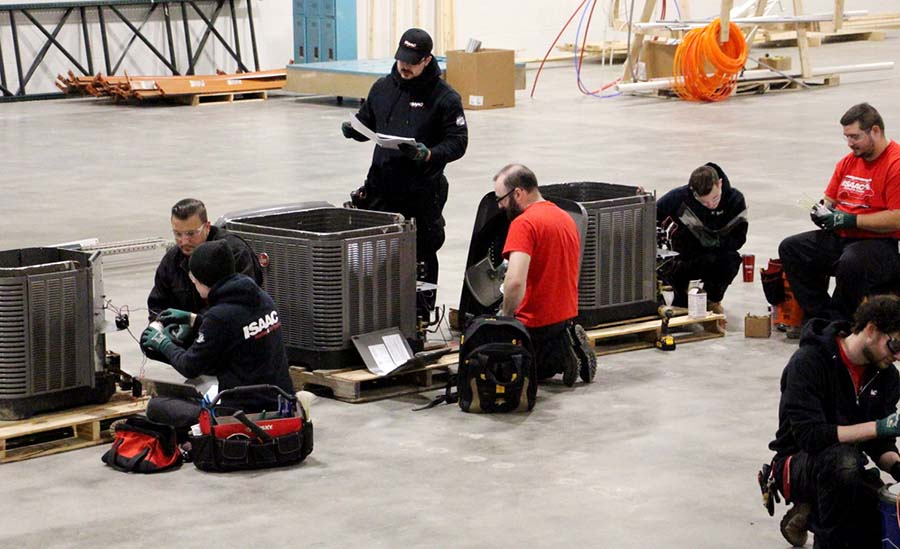 Stack also started an initiative last year to focus on recruits who had not worked in HVAC.

“We are hoping to train four to eight new techs each year,” Stack said. The first four trainees in that program started in August 2019 and graduated in December. Stack noted that the team looked at lessons learned from the first year and has made some adjustments to streamline it moving forward.

“We have outgrown our current building and recently purchased a new facility,” shared Stack. “We will now have a 1,600-square-foot training center along with a 1,200-square-foot, seated classroom/meeting space.

The new center will have steam and hot water boilers along with split systems, package units, and controls areas.

“Within the next few years,” Stack added, “we are hoping to have a second trainer on staff.”

Of course, that level of involvement requires money. Stack has budgeted about $4,000 per student for the beginner program, which includes wages while students are in class. Add the costs of the trainer and updating the new center, and the company expects to spend toward $100,000 on the operation this year.

“Going forward, we are looking at ways to have this program pay for itself by possibly offering classes to other companies in the area.” Stack said.

For its own use, Stack said the new program allows the company to look at a larger pool of potential hires instead of focusing on those with previous experience. Initial growth has even allowed Stack somewhat of a luxury in a personnel crunch: greater selectivity.

Bosworth Air Conditioning & Heating has been serving Galveston County in Texas for over 60 years. With its barrier island location on the Gulf of Mexico, the company not only offers residential and commercial service but also does some commercial marine service. 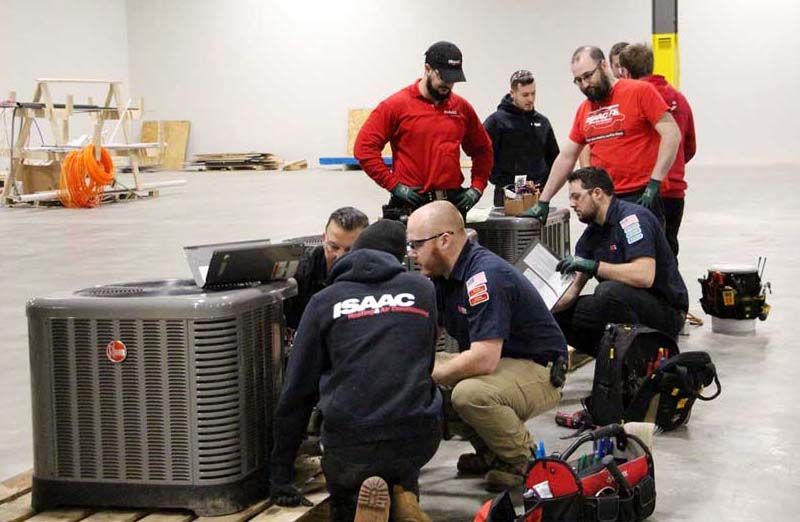 ROOMS FOR IMPROVEMENT: Isaac Heating & Air’s new training and educational center features an array of classroom and equipment-specific hands-on spaces, along with conference and break rooms.

Bosworth joined the Pledge To America’s Workers last year with a 30-person commitment over the five-year period. Kim Balfour, Bosworth’s office manager, reported that the company has completed training for five people, putting Bosworth on or a little ahead of pace with a few months left in the first year.

Like Stack, Bosworth has found some success with employees who entered the program with no previous HVAC experience, and the company plans to continue to keep that door open.

Bosworth has not expanded its training facilities as a result of the pledge, and Balfour said the contractor spent $11,600 on training last year. Bosworth’s approach illustrates how a contractor can make a meaningful contribution within its comfort level and its existing training footprint. 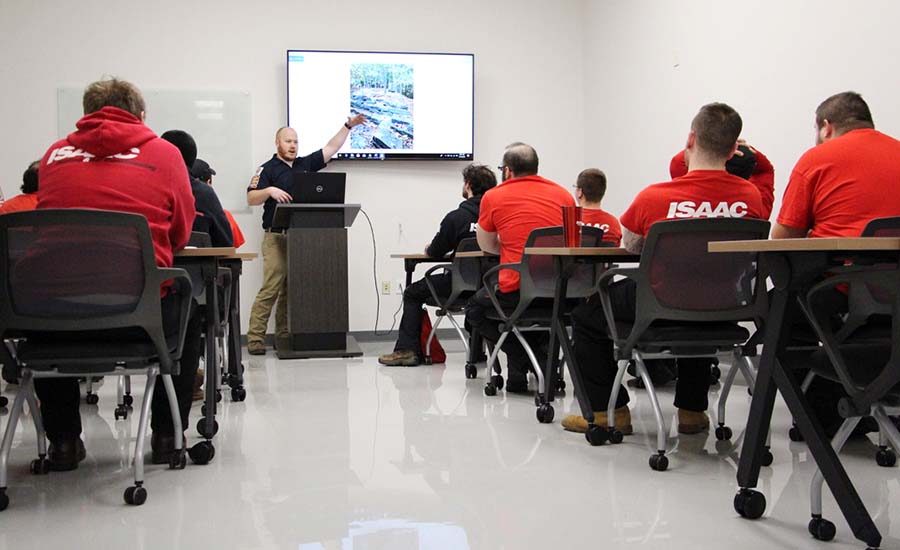 ROOMS FOR IMPROVEMENT: Isaac Heating & Air’s new training and educational center features an array of classroom and equipment-specific hands-on spaces, along with conference and break rooms.

That range of courses in a 2,500-square-foot space represents an operation many contractors would gladly aspire to host. However, the transition to a new 30,000-square-foot Isaac Technical and Education Center (ITEC) brings with it a new spectrum of opportunity. For one thing, it has allowed Isaac to open the offerings to HVAC professionals outside the company.

Knaak explained that another byproduct is the ability to give more spaces their own dedicated focus.

“We now have several different labs that include heating, air conditioning, hydronics, hot water, generators, electrical, and plumbing, and we are just getting started on construction technologies.”

With that infrastructure coming on line, Isaac committed to 1,500 training opportunities for the pledge at the White House. One hundred people received training last year.

“The new program is just now getting up and running,” Knaak said, “but as the year goes on, that number could easily reach 300 to 500 per year.”

Of course, classrooms, conference rooms, and reception area only set the stage. The team has to be ready to teach.

With that degree of investment, Knaak estimates the company will spend in excess of $1 million on training this year. The remaining imperative is to fill up those seats. A new, dedicated recruiter liaison seems to be paying dividends.

“The response from the community has been huge,” said Knaak, citing interest from schools, local workforce development programs, and other organizations. Other employers are indeed inquiring about Isaac’s new training resources. In short, “a lot has gone very well.”

However, Knaak advised that even for a program built up over 20 years, patience is still required.

“The process takes time,” he said,” in order to develop the necessary relationships.”