A 75,000-opportunity commitment highlights ACCA’s day at the White House

Representatives from a wide swath of American industries convened at the White House on July 25 to observe the first anniversary of the Trump administration’s Pledge to America’s Workers. A trio of ACCA representatives participated in the afternoon event, attended by President Donald Trump and hosted by Ivanka Trump, advisor to the president.

The nature of the pledge bears relevance to the current state of the HVACR industry. While administration comments may tend to focus on general jobs numbers, this initiative has no tangible job numbers associated with it because its objective is more specific: not to hire but to prepare people for the current and evolving job market with targeted skills and knowledge.

“The pledge reflects the President’s commitment to ensuring inclusive economic growth and making sure that all Americans are equipped with the skills they need to secure and retain good-paying jobs, whether they’re coming right out of high school and looking for their first career or entering their first career, or later on in their life cycle, needing to learn a new skill or a new trade because of the consequences and effects of automation in this rapidly changing, technological environment,” said Ivanka Trump.

President Trump cited 300 businesses who have participated so far, representing what he called “12 million pledged commitments.”

VIDEO: The NEWS Speaks With ACCA in Front of the White House

IN WORD AND DEED

After opening comments from the president and his advisor, the event itself highlighted a few employees in different business sectors. Each had varying levels of actual connection to the pledge initiative, but all of their employers are participating in the program.

“ACCA members across the country have pledged to hire and train 75,000 skilled workers in the next five years,” James said in a statement. “ACCA members are building in-house training centers, launching school-to-career co-op programs, and investing in continuing education programs for their employees and students.”

Furthermore, Isaac Heating has made its own commitment to this initiative and to preparing workers for today’s industry needs. The company’s Isaac University comprises dedicated classrooms, a 30,000-square-foot technician lab, and a cadre of full-time instructors in Rochester, New York.

“We are proud to work with President Trump to promote careers in the skilled trades,” Knaak said. “Our industry-leading training center is creating careers for men and women, and we will train at least 1,500 skilled workers over the next five years. The Trump administration’s focus on the skilled trades is helping our business bring more people into this rewarding industry.”

Not only has Isaac University been approved by New York state as a registered apprenticeship program, but the company reports it is the only contractor-run training program nationally recognized by the Partnership for Air Conditioning, Heating and Refrigeration Association for exceeding standards for curriculum, faculty, classwork, and required course load.

Knaak pointed out that while Isaac plans to hire about 100 people in the next five years, its program will still train 1,500, “including new technicians who may end up working for our competitors. We are also investing in ongoing training for our 400-plus workers.”

“Our association pledges to boost our skilled, state-of-the-art apprenticeship programs to provide opportunities for at least 15,000 additional apprentices,” Sandusky announced. “For decades, thousands of our member corporations have invested hundreds of millions of dollars to train a highly skilled workforce at DoL Certified Joint Apprenticeship Training Centers (JATCS), jointly directed by labor and management trustees. In response to the Workforce Pledge effort led by the White House and Department of Labor, that effort will intensify and grow over the coming five years and beyond.”

After seeing an advertisement for Isaac’s in-house program, Serrano completed the 12-week “boot camp” program. Today, Serrano is operating in his own truck, has completed more ongoing training, and is now a field trainer himself.

Of those in the State Dining Room for the event, Luis Serrano of Isaac stood out as representing the spirit of this program through his success story in the HVACR industry.

After a couple of years at community college, Serrano decided to pursue a skilled trade. He worked as a maintenance manager for an apartment complex, but he determined that the career path was not sufficient for raising a family, and he felt he had more to offer in the way of technical ability and customer service skills.

After seeing an advertisement for Isaac’s in-house program, Serrano completed the 12-week “boot camp” program. At that point, Isaac selected him for additional on-the-job training with a senior technician.

Today, Serrano is operating in his own truck, has completed more ongoing training, and is now a field trainer himself. Serrano’s goal at Isaac is to be a service manager. As for his personal goals, Serrano purchased a house last year and is raising a family.

ACCA’s Washam echoed Knaak’s appreciation for President Trump’s use of the presidency to raise the profile of these issues. He described the president’s focus on careers in skilled trades and technical education programs as unprecedented, noting that “the administration is inspiring more people to consider rewarding careers in the trades.” ACCA, he said, looks forward to continued support from Vice President Pence, Ivanka Trump, and others in the administration as it pursues its pledge for 75,000 “enhanced career opportunities,” in the pledge’s wording, through its members over the next five years. 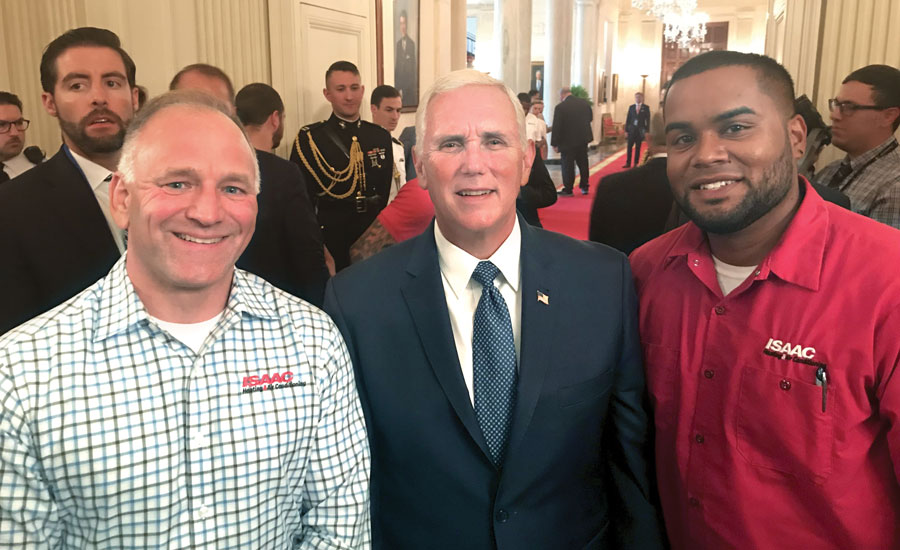 If that pledge is substantial, ACCA does not intend to leave it to members to meet without association support. The association seized the moment to share its new “School To Career Program” materials with The NEWS.

The materials then move on to practical advice, such as how to build a relationship with local schools and students. Other guidance speaks to how to make the most of opportunities like advisory boards, career fairs, and co-op programs.

Back in the State Dining Room, President Trump took the opportunity to do some complementary marketing alongside the day’s theme of job-friendly education. In his closing remarks, he spoke to the group about what he described as “all the really spectacular companies.”