This website requires certain cookies to work and uses other cookies to help you have the best experience. By visiting this website, certain cookies have already been set, which you may delete and block. By closing this message or continuing to use our site, you agree to the use of cookies. Visit our updated privacy and cookie policy to learn more.
Home » Hot Yoga HVAC Presents a Challenge and Opportunity for Contractors
HVAC Commercial MarketIndoor Air QualityCommercial Indoor Air QualityHumidification and Dehumidification

Hot Yoga HVAC Presents a Challenge and Opportunity for Contractors

Hot yoga in the United States has attracted significant attention of different sorts over the years. From alleged conduct of the Bikram yoga inventor to discussions of hot yoga’s health benefits versus yoga in more moderate temperatures, the phenomenon has generated plenty of talk, many fans, and occasional headlines.

Comparing assorted yoga methods is well beyond the scope of this article, but two facts about hot yoga remain entirely uncontroversial.

Hot yoga in general is a burgeoning market in the U.S., attracting new practitioners and entrepreneurs interested in building businesses to meet that demand.

Ratcheting up the temperature to 100° in a room where people will exercise presents special human and mechanical considerations. Whatever they do, HVAC contractors should not endeavor to pick up a piece of this business by diving in and applying what has worked for them in other environments.

Over two decades, Chad Clark has built a design and consulting business, Hot Yoga Supply / CS Equipment, with a division focusing on hot yoga studios and their owners, contractors, and architects. Charisse Clark, Ph.D., works as a designer and project coordinator for their company.

Charisse Clark has seen the full spectrum of wise and unwise decisions when it comes to hot yoga planning and construction. More than a few times, she said she has run into contractors who might be described as less than attentive. 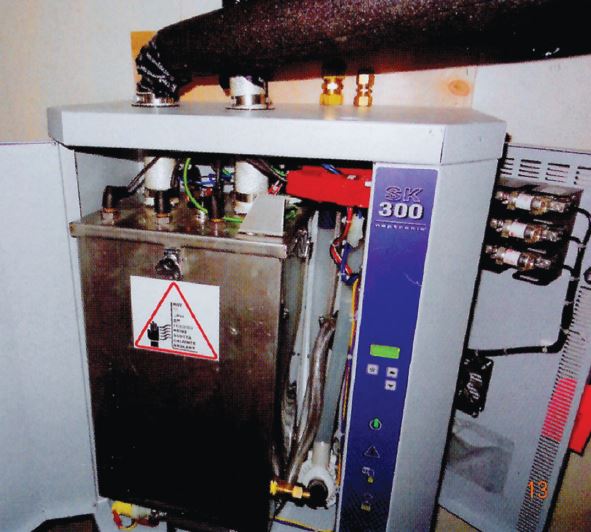 LETTING OFF STEAM: Humidifiers of a certain size will have two steam outlets instead of one. PHOTO COURTESY OF HOT YOGA SUPPLY

“On jobs, I send the submittals, I send the checklists … they won’t even make sure the equipment is wired properly before they put the controls to it. I mean, this is basic HVAC 101. You’re looking at some people who are trying to make a quick buck.”

To combat what the couple sees as a collective level of industry knowledge that is not up to par for serving these facilities correctly, she said that they are trying to work with ASHRAE in pursuit of developing guidelines for hot and humid exercise rooms.

Chad Clark has written a book on the topic (“How to Build a ‘Chad Clark’ Hot Yoga Studio: A guide to the many considerations in developing a yoga studio focusing on a heated exercise room”).

But for the moment, in lieu of more rigid training for hot yoga designers and installers, Charisse Clark offered several insights and cautionary tales that only scratch the surface for contractors who may consider entering a space that is hot in more ways than one.

1. Insulation essentials. In Charisse Clark’s assessment, this is not an area where a team can cut corners.

“You need R40 all the way. You’ve got to do that, like it’s a freezer,” she said. Beyond that, you need spray foam and a layer of Low-E.

“A great vapor barrier is also a great radiant barrier, and it self-seals around your screws and your staples and all that stuff. You put that under your sheet rock, you’re good to go.”

2. Unlike the stock market, the goal is low returns. It’s obvious, but it is a functional difference that one could easily overlook — yoga is done on the floor. That affects proper placement.

“You’ve got to pull that air from high to low, so it comes over and, ideally, from front to back. Some owners will want to be able to air condition the space, too, which can complicate matters.” They may put registers in the ceiling, and then they’ll put all the supply in the ceiling and the return as well.

“And then,” she said, “they wonder why the furnace limits out.”

3. It’s not the heat, it’s the humidity. Well, it’s managing both, really, when it comes to establishing a correct, healthy environment for this exercise. But contractors can avoid one set of problems right away by leaving adequate access for the humidifier.

“You might have to rinse out the tank or your humidifier every month,” Charisse Clark said — or maybe every three months, depending on usage and water scale in that locale. Whatever the right frequency is, failing to reach it will create problems.

4. Don’t overdo recovery. “You’re going to have to use some type of energy recovery ventilator” to bring fresh air in, Charisse Clark said. The catch is, the normal ERV strategy that might work for a school or office building won’t be appropriate here. The key is picking the right moments.

She explained that even with 90 percent efficiency, “if you run that all the time, you’re always at a 10 percent deficit. It only needs to run when the CO2 levels climb over so many parts per million,” with the exact figure shaped by number of people in the room, the room size, etc.

5. IAQ hazards. “How many days do you think it takes to start mold and bacteria growing in your system?” That number can drop precipitously when the space features extreme heat and a humidification system. Charisse Clark sees owners and project teams frequently establish a healthy budget but then go cheap on IAQ protection. 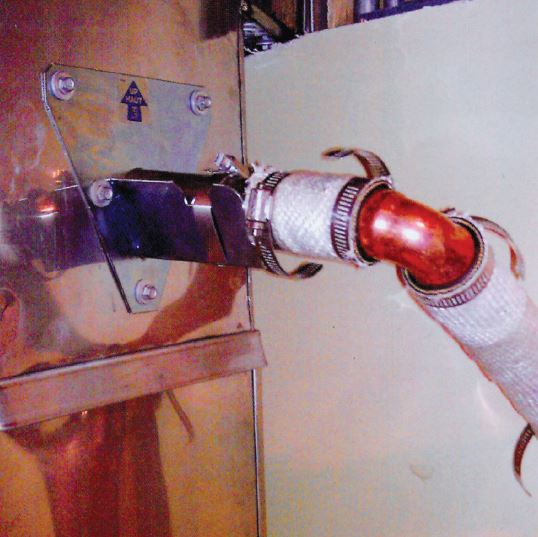 POINTING THE WAY: Notice the arrow points upwards. Some installers point it in the airflow direction accidentally and cause floods in ductwork.

“At the very least, you need a negative ionizer” to help clean the air, she advised. “But I love the kill-and-capture, like a small UV light array like they do in hospitals, in an operating room.”

She reports that she incorporated an ionizer not only in the couples’ own three 10,000-square-foot facilities, but also in the hot air system in their home. She believes it produces noticeable health results for occupants.

“The doctors call and they say, ‘What are you doing? Because my patient was on an inhaler for 20 years, and now they don’t need it.’ And I say, “Well, negative ionization will also clean out your lungs. It’s great for your heart.”

On the HVAC maintenance side of things, she describes the result as “the cleanest, freshest air you’re going to breathe all day. You’re not going to have any dust (if you change your filters), and your ductwork is going to stay so clean because it’s a closed system.”

6. Speaking of filters. The Clarks prefer to keep the filters and access to them right there in the main room as much as possible, so that they are easy for the owner to change.

7. Post-yoga problems. A common problem arises when contractors or designers haven’t experienced hot yoga themselves and don’t think through the actual sequence of events. Charisse Clark walks through it. 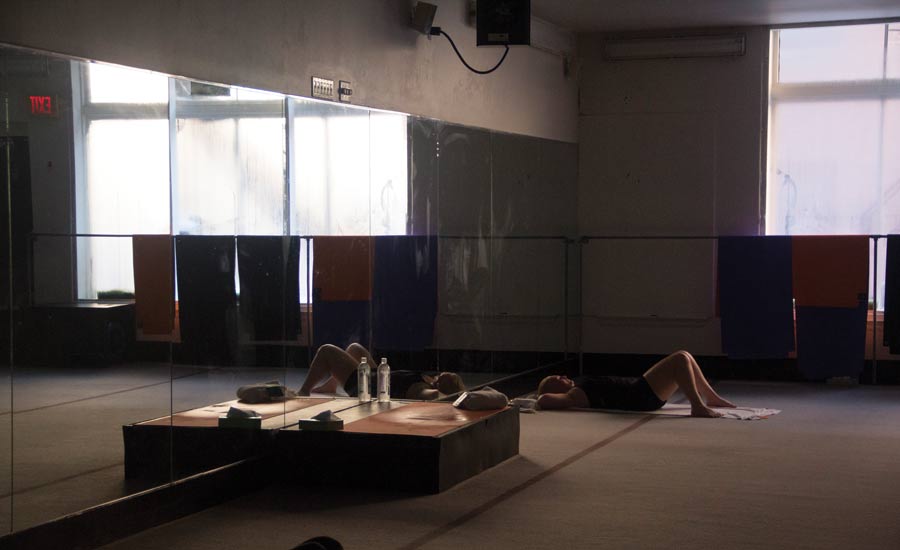 AFTER CLASS: Equip those spaces to handle the heat and humidity load in creating a workable environment for customers getting dressed and ready for the rest of the day. PHOTO COURTESY OF DIGBOSTON/FLICKR, CC BY 2.0

“People are coming out of this room, and the radiant heat and the humidity coming off just their bodies is enough to fog up all your windows. They take a shower, and everybody’s still hot. So how are they going to get ready for work, and put makeup on, and do their hair when they’re still sweating?”

So, she said, locker rooms require an HRV of their own to attack all that excess humidity (which is otherwise going right back into the central system). Related, some manufacturers make equipment specifically for high-temperature applications, where alterations like stainless steel were needed to hold up to the environment.

That, along with adjustments like avoiding can lights in the yoga space (because even “shower” versions won’t completely seal and will still allow vapor loss), illustrates why hot yoga spaces are not business as usual.

The consequences of poorly executed HVAC for hot yoga owners can include neighbors or landlords (and their lawyers) unhappy with all the heat bleeding into adjacent spaces; needlessly uncomfortable clients; and, ultimately, a missed opportunity and unsuccessful business.

The sector may be booming, but expert advice says that succeeding in this area for HVAC contractors requires specialized knowledge, whether it involves a certification or not.