This website requires certain cookies to work and uses other cookies to help you have the best experience. By visiting this website, certain cookies have already been set, which you may delete and block. By closing this message or continuing to use our site, you agree to the use of cookies. Visit our updated privacy and cookie policy to learn more.
Home » Historic Homes Present Profit Opportunity for HVAC Contractors
HVAC Residential MarketHVAC Light Commercial Market

When The ACHR NEWS looked for certain areas of expertise to explore in this focus on unique HVAC applications, R&B Inc.’s work on a 1909 beaux arts mansion in Washington demonstrated that the Warrenton, Virginia, firm had the right touch for helping older homes move through assorted project unknowns and into modern comfort.

However, owners of higher-profile residences often prefer to take a lower-profile approach to renovations. That stately residence stayed out of the formal discussion, but the duo at the heart of R&B’s project performance came up with others easily enough.

Indeed, the Italianate stucco house in Warrenton — once the residence of Confederate Col. John S. Mosby (“The Gray Ghost”) — was built in 1859 but has gone from private home to museum and back to private home again over the course of this century.

Its status and sale made The Washington Post, among other local media, and the location’s sense of ownership drama extended to at least one renovation process. White told The ACHR NEWS that R&B was actually hired as a backup, looped in by a contact who owned a different historical site in the state.

“We installed three Unico systems with geothermal loops to keep the historical look on the outside,” White recalled. “We ended up utilizing all the non-working chimneys and making the intakes look like a part of the actual fire box.”

Mosby House also represented the first time the company had integrated a CO2 system in a high-velocity application, White said. With not many mechanical engineers being well versed in that concept, White said, he and Snyder had to work out some ideas to deliver the intended performance.

“We ended up using supply boxes with a cast iron finish as registers to try to keep the look from that era,” said White.

R&B’s website does not make a big deal of its historic residential work. It touts installation and service work for all homeowners (plus a parts counter for DIY’ers). The only hint might be a mention of the company’s own sheet metal team, a resource that could come in especially handy when dealing with the stingy spaces and ductwork challenges of older homes. 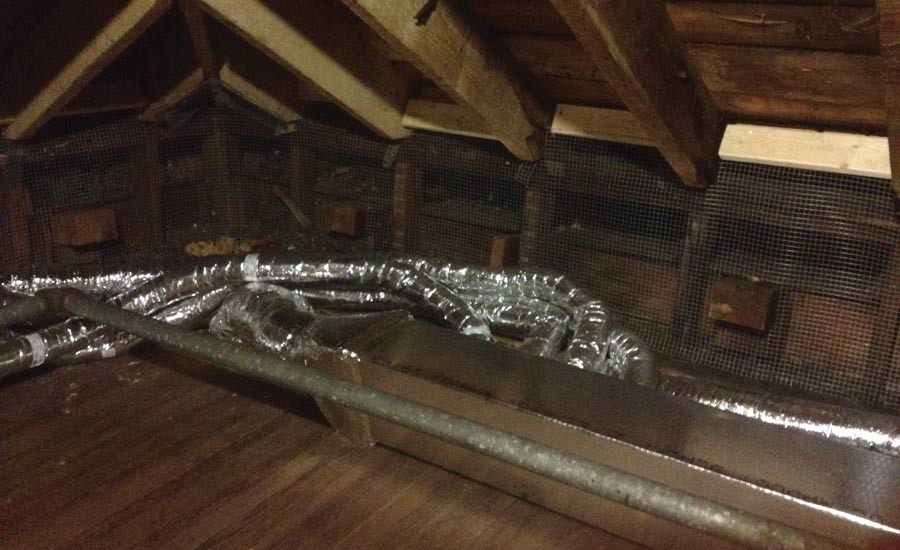 TUCKED IN: The ability to run some ductwork inside a kneewall is a welcome option when adding cooling to older homes.

Snyder brings up those challenges when asked if a certain tipping point showed him that historic residential was a niche worth their commitment. He remembers that early on, so many of their customers were being told elsewhere — repeatedly — that they just couldn’t get a central cooling system installed due to available space (or lack thereof) unless they basically wanted to start over with a new structure.

“We found that we have a good vision to design effective systems and get from Point A to Point B without ripping someone’s home apart.”

Snyder feels like R&B has adapted with the times pretty well. But upon reflection, he does think his team back then might have tried too often to squeeze an air handler into a tiny space, creating a difficult service situation.

“I think we took too much pride in being able to install a system by any means possible,” she said. Snyder approaches such cases with a little more wisdom now, adding that “the size of high-velocity air handlers has also increased from 30 years ago, so it really cuts down on areas we used to consider placing them.”

As for the sheet metal squad on R&B’s website, Snyder recalls that the division required some investment and new hires in its early days, and not solely to cover their own projects.

“We had to expand our workforce to cover the installs we got from a stable of six or seven other companies who would only do their own ductwork when it came to equipment replacement.”

Snyder has been in the business a good while, and earlier on, the R&B org chart looked a little different.

“I was once Dave’s helper in the field,” White recalled. “And over 20 years later, we are on jobs together coming up with ideas.”

The duo employs a talk-through-it sort of strategy, and when two people have known each other a long time, both know what they’re doing, and happen to have different opinions on how to proceed. The effect can be a bit unconventional in the realm of contractor visits.

“Some (customers) can’t stand us together, and others are in shock,” White said. Still, “it all comes down to being honest with the customer, being up front on why something can or cannot be done.”

BACK TO THE PRESENT

While older-home challenges remain largely the same for an HVAC contractor, dealing with the older-home homeowner has changed a bit.

“We used to have to educate the customer,” Snyder said. “But now, with the internet, we have to re-educate and dispel rumors they got into their heads from the research they have done on their own.”

As for those other typical project obstacles, Snyder said that the biggest issue for a new air conditioning system is where to put the air handler if the attic space isn’t adequate. 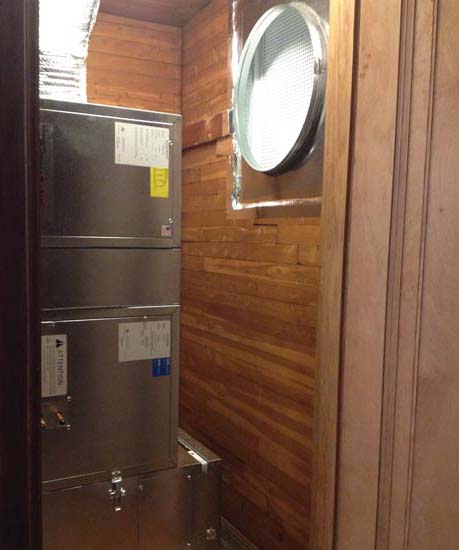 HANGING IN THE WARDROBE: A closet can be a good, inconspicuous home for a new unit, perhaps serving an older home’s upper floors for the first time. PHOTO COURTESY OF R&B INCORPORATED

“Also, convincing the customer that they need more insulation (or any insulation) to make the system perform better,” he reported.

Snyder cited problem-solving like “building a new enclosure in a room, hanging over an open stairwell, then enclosing and even installing (the AHU) in a new enclosure on a roof.”

Inquire about an equipment-related trend and, unsurprisingly, he’ll list mini splits as an example of a modern option that can open up possibilities for many older homes.

Back in the attic, things also seem to be getting worse than they used to be.

“This particular region is becoming an extreme humidity area,” Snyder said. “We have dealt with duct sweating and complete air handler sweating in houses that have never had this issue before. Ductwork that was installed decades ago that never had sweating issues is now causing stains and mold growth.”

Snyder believes that, as a result, current requirements in states like Louisiana and Georgia will migrate to his area soon (but, he adds, not soon enough for some homes).

On the sales side, Snyder believes the best response to that development is to get back to a customer education approach. Slow down a little, explain to potential customers the possible issues for each option, and tell them “what precautions you — as a company — will be taking to reduce problems now and in the future.”

In the end, that approach relies on data and experience to persuade people that the work isn’t just a “scare tactic” to get business.

White credits three core tactics for building clientele in this particular area: “Referrals, and networking, and putting our foot in the door and not allowing them to close the door on us.”

He’s speaking figuratively about that last part (probably), but the team also looks for ways to think outside the inbox.

“We will also do small stuff like lunches,” White continued. “Anything we can do other than an email.”

Of course, a contractor doesn’t always win the project in the first place, and that brings up one point that both men agree on: In historic residential work, losing the job can be just the beginning.

“I have found that, in this market, the job you lose to an incredibly low bidder is the job you get later to fix the bad install,” observed Snyder. “This has presented itself quite often over the years.”

Snyder tells potential customers to let the next salesperson explain their own plan so the homeowner can truly compare contractors, as opposed to showing the next company what R&B suggested and asking for feedback.

“We are called out more to fix jobs lately than for new installs,” White noted. Many times, they find that they lost a bid to a company that wound up not sharing R&B’s sense of concern for maintaining a look that reflects the home’s original era. Sometimes the homeowner may live with it, and sometimes R&B might get a call back.

Word gets around when a company delivers a good result, and R&B has done some out-of-town work as well over the years. However, Snyder said there has been less of that lately, for reasons unrelated to customer interest.

“The workforce now seems to be much less agreeable to do a job that would require them to be away for a week or two in an area where it makes no sense to drive back and forth each day,” he explained.

As for managing local work, it takes some attention to get the most (and best) out of a team. White and Snyder know their employees’ various skill levels and will determine the best people for a particular job. According to White, some trial and error is involved, but it also pays to think further ahead.

“We try to put different skill levels together for on-site training.”

White and Snyder set up some valuable intra-team mentoring on the job. So what advice do they have for contractors who are thinking about historical residential work?

“I don’t want any more contractors in this area; I will leave this blank,” White joked.

Snyder chimed in with a few attributes a good candidate might have.

“Older house experience, experience with multiple system types, knowing which system is right for the project, and knowing how to navigate among the codes and regulations that seem to change in every jurisdiction and country.”

That last bit sounds very much like the voice of experience in a metro area that all runs together, from Virginia cities and counties across the river to the District of Columbia itself, and out to yet more localities and counties in Maryland.

No matter which ZIP code the day’s client has, R&B’s historic home customers get two veteran perspectives under one company name — along with, as White is quick to point out, a full team and office staff with experience through every aspect of this type of project.

“This work experience together is the best way to approach jobs,” White concluded. “We both know what we can do as a company, and we always use other jobs as templates for the new ones.”

While he acknowledges that, as he puts it, “we speak freely with each other on jobs,” he points to challenging each other to come up with the better idea as “an important part of the competition.”

He may have been referring to the friendly competition between Snyder and himself, but he could’ve just as easily meant their lively dynamic’s contribution to the company’s success.

“Do It Yourself” Means Profit Opportunities for HVAC Contractors

Hot Yoga HVAC Presents a Challenge and Opportunity for Contractors