Consumers are changing the way they shop, which is leading to changes in the way supermarkets are designed. In addition, states are implementing regulations that seek to phase down the use of HFCs, which is affecting the types of refrigeration systems typically installed in these applications. Quickly adjusting and responding to these changes will be necessary for end users and refrigeration engineers and contractors, many of whom were looking for advice on how to do just that at the Food Marketing Institute’s (FMI) 2019 Energy & Store Development Conference, held recently in Dallas, Texas.

As Brad Morris, senior manager of engineering and energy at Giant Eagle Inc., and John Lerch, CEP, director of energy and facilities at Weis Markets Inc., noted in their opening addresses, the food retailing industry is no stranger to change and disruption, but today, disruption is coming at a faster pace than ever before. This includes the growth of online retailers, as well as consumers who are now demanding information concerning environmental impact, health and wellness, and transparency, in addition to the basics of cost, taste, and convenience.

“New competitors are coming from all directions, and new technologies are appearing at breakneck speed, offering opportunities for new competitive advantages and challenges to traditional infrastructures,” said Morris. “No corner of the industry is unaffected, and those of us responsible for building and maintaining those stores have found our durability and flexibility tested.”

Michael Sansolo, retail food industry consultant and research director for Coca-Cola Retailing Research Councils of North and Latin America, addressed these challenges in a general session, where he discussed new technologies as well as some of the risks supermarkets face from changing consumer habits. 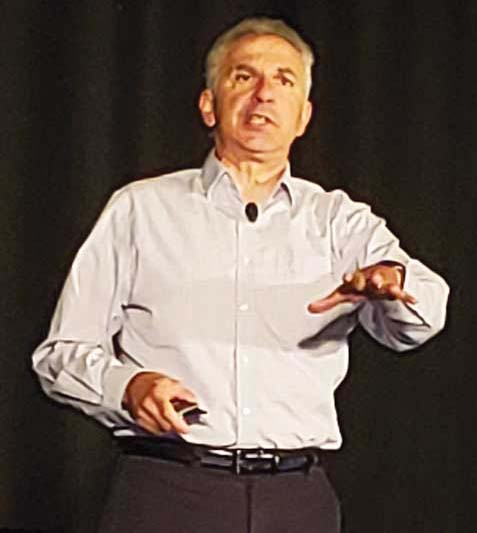 SUPERMARKET RISKS: Michael Sansolo spoke about new technologies, as well as some of the risks supermarkets face from changing consumer habits.

Sansolo explained how customers are looking for connections and experiences. New technology will help, allowing stores to make shopping more interactive. This will include everything from in-store robots, which will help with inventory and maintenance, to digital fixtures and shelves that will continuously engage consumers through sounds or images. He outlined a scenario in which store personnel will be able to identify shoppers as soon as they enter the store and then engage them while they are on the shopping floor. He admitted that some may think this intrusive approach is “creepy” but that many consumers will find it appealing, especially as more of this technology works its way into our homes.

“The smart home and the smart store are going to be integrated — the kitchen countertop will be able to display recipes, while the refrigerator will be able to create a shopping list, which will then be transmitted to the store automatically,” he said. “If you are sitting here thinking that your stores are perfectly fine and they will work for the next 20 years, no, they won’t. You remember Sears and K-Mart? Complacency is an enemy. Comfort is an enemy. We have to start pushing to new places, because if we don’t do that, others will. When artificial intelligence and 5G come together — which is just a matter of time — the world will change. The future is here already, and we have to figure out how to get there first.”

The future will also include new refrigerants, as numerous states are starting to talk about phasing down HFCs over the next few years. California is taking the lead, with a proposed GWP limit of 150 for new stationary refrigeration systems containing more than 50 pounds of refrigerant, as well as a ban on sales of virgin refrigerants with a GWP above 1,500, starting on January 1, 2022. 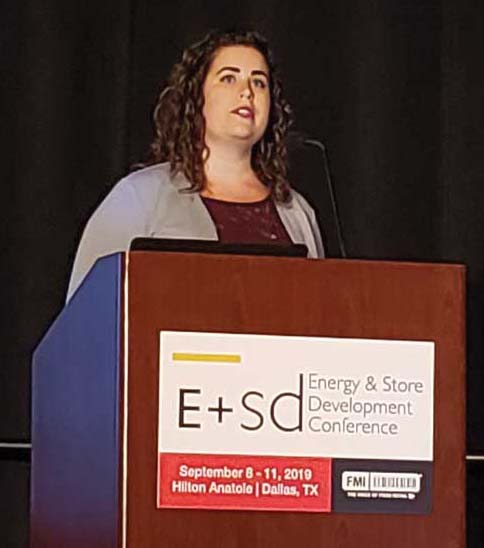 Lauren MacGowens, sector lead of refrigeration technology at Air-Conditioning, Heating and Refrigeration Institute (AHRI), discussed the regulatory changes affecting refrigeration during a general session. She stressed that there is a need to find a refrigerant solution for the entire refrigeration industry instead of being forced to comply with numerous states legislating various HFC phasedown schedules.

“I think we can all agree that the ratification of Kigali amendment would be ideal, but that does not currently appear to be in the near future,” she said. “AHRI is working with other organizations to implement Kigali, including phasedown legislation on a federal level. With the current administration, this must be done strategically and with extreme caution. There are still many unanswered questions. How will it be implemented? Will we use sector-based controls similar to what EPA [Environmental Protection Agency] has implemented in the past? Will it be GWP limits or some combination of the two? There are many of these questions to answer moving forward.”

“CARB has made it clear that [its proposal] does not only apply to new stores or new construction as initially thought, but to all new equipment being added or replaced, which could mean changing over entire stores long before they are due for a retrofit or redesign”
— Lauren MacGowens
Sector lead, refrigeration technology Air-Conditioning, Heating and Refrigeration Institute

She noted that EPA’s now-vacated Significant New Alternatives Policy (SNAP) rules 20 and 21 would have helped the industry take the first steps towards phasing down HFCs, and without these rules, states will continue to forge ahead on their own. For this reason, she asked audience members to provide feedback to AHRI about how these phasedowns will affect their stores.

“EPA is working on revamping these rules, but without a final determination or understanding of what this will look like, there is a need to provide feedback to the states as they push forward,” MacGowens said. “Many state regulators have indicated they especially want to hear from end users and store designers. AHRI represents the OEMs of the industry, but we need you to be the voice that is heard from these regulators. Store layouts and safety requirements will change, and we need your input.”

And that input is needed soon, as California’s Air Resources Board (CARB) is in the final stages of nailing down its HFC phasedown schedule.

“CARB has made it clear that [its proposal] does not only apply to new stores or new construction as initially thought, but to all new equipment being added or replaced, which could mean changing over entire stores long before they are due for a retrofit or redesign,” said MacGowens. “AHRI has countered CARB’s proposal, asking for a two-step approach (see Table 1), which would give us more time to comply with the current regulations and also the opportunity to get safety standards in place so that A2L and A3 refrigerants can be safely used in applications.”

Note: Commercial Refrigeration equipment with charge less than 50 lbs is covered by CaSNAP’s adoption of EPA SNAP rules 20 and 21 and therefore not addressed in the table below.

[1] Flammable refrigerants cannot be used per ASHRAE 15 in hallways and egress areas, where ice machines are often located.

[2] Date is contigent on the adoption of Safety Standards into California State Code.

She added that CARB continues to believe that ammonia and CO2 refrigeration systems will be viable options for all new stores and retrofit applications as well. “We do not agree. The industry voice must be heard, and we need your help.”

Next year’s Energy & Store Development Conference is scheduled to take place from September 21 to 24, 2020 at the Baltimore Hilton Inner Harbor in Baltimore, Maryland.