Regulations concerning refrigerants and commercial refrigeration equipment are changing quickly, and food retailers and HVACR contractors alike are looking for opportunities to learn more about how these changes will affect them. Emerson’s recent E360 forum in Houston served to do just that, providing a range of industry experts who not only spoke about the changing regulations but offered insights on current trends and opportunities, as well as the varying types of system architecture in the commercial refrigeration market.

In his opening address, Ed McKiernan, president of cold chain, electronics, and solutions at Emerson, discussed how consumer, commercial, and regulatory challenges are all contributing to the demand for a more tightly controlled cold chain.

“We have more than 30,000 traditional supermarkets in this country, and that’s before you add a growing number of dollar stores and other outlets for food. We need to figure out how to maintain that infrastructure.”
— Ed McKiernan president of cold chain, electronics, and solutions Emerson

“The bar has never been higher, and we all have to work together to solve these challenges,” he said.

McKiernan pointed to four challenges that are driving this demand. The first is food safety, because the potential for foodborne illness threatens food manufacturers, retailers, and consumers. The second is food quality, as brand reputations are built on the promise of delivering consistently exceptional food and dining experiences. The third is the impact of maintaining the current infrastructure, which is becoming more challenging.

“We have more than 30,000 traditional supermarkets in this country, and that’s before you add a growing number of dollar stores and other outlets for food,” McKiernan said. “We need to figure out how to maintain that infrastructure. Meanwhile, because of the dynamics in the graying of America and the retirement of many of us in the industry, there’s an estimated shortfall of 115,000 technicians just to continue to support the industry at the current level. It’s a challenge. And the new systems are not like the old ones, so these people will need to learn new skills.”

The last challenge is regulation, which is happening at an unprecedented rate in commercial refrigeration, said McKiernan. For example, the Department of Energy (DOE) is mandating energy reductions that range from 5 to 50 percent, which could be difficult for some manufacturers to achieve.

“The Environmental Protection Agency’s [EPA’s] assumption is it’s their job to lay down the challenge, and it’s our job to figure out how to meet the challenge,” he said. “That’s tough. If we want to stay in this business, that’s what we’ve got to do. And certainly, there are changing regulations from the EPA, which continue to be a challenge.”

The evolving regulations from the EPA were addressed by Emerson experts Rajan Rajendran, vice president of systems innovation center and sustainability, and Jennifer Butsch, regulatory affairs manager – air conditioning. A particular concern of theirs involved the proposed rollback of Section 608 of the EPA’s Refrigerant Management Regulations as it applies to HFCs. 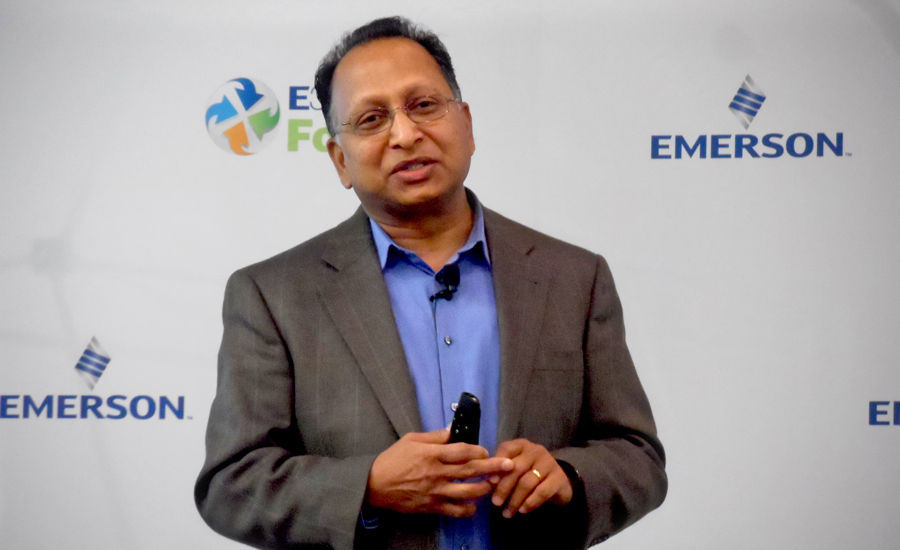 ONGOING STRUGGLE: Rajan Rajendran, vice president of systems innovation center and sustainability, Emerson, noted that the EPA is struggling to decide whether or not it even has the authority to approve new refrigerants.

“Because of the court case last year, which vacated Significant New Alternatives Policy (SNAP) Rule 20, EPA no longer feels that they have the authority to regulate HFCs,” said Butsch. “What this rollback would do would be to say that appliances with 50 or more pounds of refrigerant would no longer be subject to the refrigerant management program. There are many negative effects that could come to the industry as a result of this.”

The problem right now is that the EPA is struggling to decide whether or not it even has the authority to approve new refrigerants, according to Rajendran.

“The SNAP approval process is practically used all over the world,” he said. “Even though it’s a U.S. listing, most countries look to see if a refrigerant is approved there, and if it is, then they approve it. Now everybody is asking, ‘Well, if the EPA is not going to do this, then who is?’ We don’t know yet. We don’t know if EPA will continue to do listings or not, but we do know that California has been given authority to list refrigerants. So, now, imagine — 50 states, each doing their own listing. How would you like that? I know we wouldn’t like it. It would be a nightmare.”

In the absence of federal certainty, California, for example, is moving ahead to phase down HFCs, passing Senate Bill 1383, which requires the state to reduce HFC emissions by 40 percent by 2030. In crafting the bill, Butsch explained that the state looked at the existing federal landscape at the time and assumed the Kigali Amendment and SNAP Rules 20 and 21 would reduce emissions by a certain amount, but they still could not reach the 40 percent reduction target, so they needed to put together a plan to address that gap.

“In the meantime, the U.S. hasn’t ratified Kigali, then with the vacating of Rule 20 and the likely vacating of Rule 21, California lost that piece,” said Butsch. “So they put in a backstop. A lot of equipment had already transitioned away from high-GWP refrigerants, and they didn’t want manufacturers to go back to using them, so they adopted certain pieces of SNAP Rule 20 that were either already implemented or had effective dates that were very close on the horizon. This affected most of the retail food refrigeration equipment that was in the SNAP Rule 20. This was approved in March but is still not final; however, the Jan. 1, 2019 date is still in effect.”

As Rajendran emphasized, “SNAP Rule 20, which was vacated all over the country, is alive and well in California. If you’re selling equipment in California or you’re an end user in California, whatever was in SNAP Rule 20 from a commercial refrigeration point of view, it’s still good.”

On digital shopping, both expect to see growth in this area but perhaps not as quickly as some experts are predicting. Thrasher noted that the prediction is that by 2025, 20 percent of commerce will be online, but he believes that will be closer to 9 or 10 percent.

“It’s definitely a rising trend,” he said. “Consumers are already taking advantage of curbside service and deliveries. Supermarkets have to adapt to however the market is flowing.”

This will inevitably lead to food retailers working hard to stay relevant in their marketplace, said Gosselin. For example, if Amazon is driving sales online, perhaps that will have an impact on the center store, as stores will have to differentiate themselves from not only online retailers, but from competition within their market place. This could result in the center store changing to become more of a destination center, such as a restaurant or a place to buy meals to go.

As for refrigeration system architecture, Thrasher sees movement toward self-contained or hybrid systems due to their flexibility.

“Curbside service is a recent phenomenon where now, stores have to adapt space in their store,” he said. “As far as refrigeration is concerned, they need something flexible that can be expanded for curbside service.”

Thrasher added that no one knows what is going to happen with refrigerants in the future, but end users are concerned about investing too much into one particular refrigerant, in case it becomes obsolete. That’s why he believes that distributed systems will become more popular, as smaller units can be placed on the roof to serve specific areas of the store. This minimizes the amount of refrigeration needed and is also expandable in the future.

Knowing that refrigerant regulations will change, Gosselin noted that the question becomes, how do end users get in front of that with their system architecture?

“Do you use micro-distributed systems or regular distributed systems? Do you do natural refrigerants? There are a lot of changes,” he said. “For end users, the challenge is not only what do they have to do to maintain their current fleet of stores, but what do they have to do with their future stores so that they don’t add to the problem. And how do they do that under a refrigerant management program?”

Andre Patenaude, director of food retail marketing and growth strategy, cold chain at Emerson, continued the conversation about supermarket architecture trends in an afternoon workshop, noting that the spectrum of options will continue to expand. He discussed the many different CO2 choices that are available, as well as how propane and ammonia are working their way into supermarket applications. 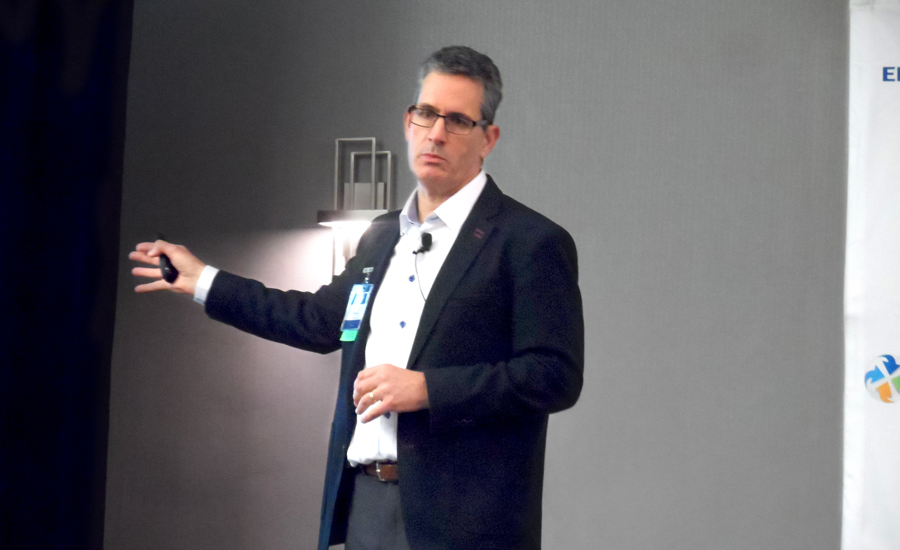 NEW CHOICES: Andre Patenaude, director of food retail marketing and growth strategy, cold chain at Emerson, discussed the many different CO2 choices that are available, as well as how propane and ammonia are working their way into supermarket applications.

For those end users looking to keep their existing refrigeration equipment but who would like to make it more energy efficient, Patenaude discussed various upgrade options, such as the use of variable frequency drives, electronic expansion valves, and continuous commissioning programs. But those capital upgrades need to be weighed against the cost of a new system, which may not only be more efficient but also contains the latest technology, such as IoT components and complete modulation.

“There are lots of things to think about when upgrading,” Patenaude said. “But most importantly, you need to know the difference between two simple words — effective versus efficient. A lot of us think that just because there are no alarms and everything is at temperature, the system is working great. But a store might be running 15 or 20 percent more energy, so it’s not efficient, but it’s effective. How do you take both of those and combine them together? You want the system to be effective for food quality and food safety, but you also need it to be efficient in order to remain profitable. Tying everything together through an enterprise service network that can take advantage of utility programs can help turn a seemingly inflexible energy asset into a flexible one.”

As with all the speakers at the E360 Forum, Patenaude gave attendees plenty of food for thought. And attendees offered ample feedback regarding the concerns they have about the changing landscape of commercial refrigeration. By addressing the issues collaboratively, Emerson hopes these types of gatherings will help create a more comprehensive view of the cold chain that addresses energy efficiency, environmental protection, equipment reliability and safety, and economic considerations.

Emerson to Host Refrigerants and Regulations Discussion at E360 Breakfast