California has been in the news a lot lately for its unilateral push to severely limit the use of HFC refrigerants in order to meet its climate goals. In fact, lawmakers there recently passed legislation that would ban the use of HFC refrigerants completely in many types of new refrigeration equipment, including remote condensing units, refrigerated food processing and dispensing equipment (e.g., Slurpee machines; frozen yogurt dispensers; and small, self-contained refrigeration units), and refrigerated vending machines.

Even though other states have expressed an interest in emulating California’s HFC ban, they have not yet passed any laws. In fact, many contractors report that they are still primarily servicing and installing HFC equipment and have only limited exposure to HFO blends and natural refrigerants, such as CO2, ammonia, and propane. However, as more states — and possibly the federal government — move to restrict the use of HFCs, it is likely that end users will soon start moving over to these alternative refrigerants, which means contractors should be prepared for that transition.

Steve Wright, president of Wright Brothers Inc., Atlanta, has worked in the commercial refrigeration and process cooling markets since 1978, and about 70 percent of the equipment his company services in supermarkets uses HFCs, while the remaining 30 percent still uses HCFCs. He said most of his supermarket customers are not considering transitioning to lower-GWP refrigerants at the moment because there are several HFC blends that still meet the current Significant New Alternatives Policy (SNAP) guidelines and are not in immediate danger of being delisted. 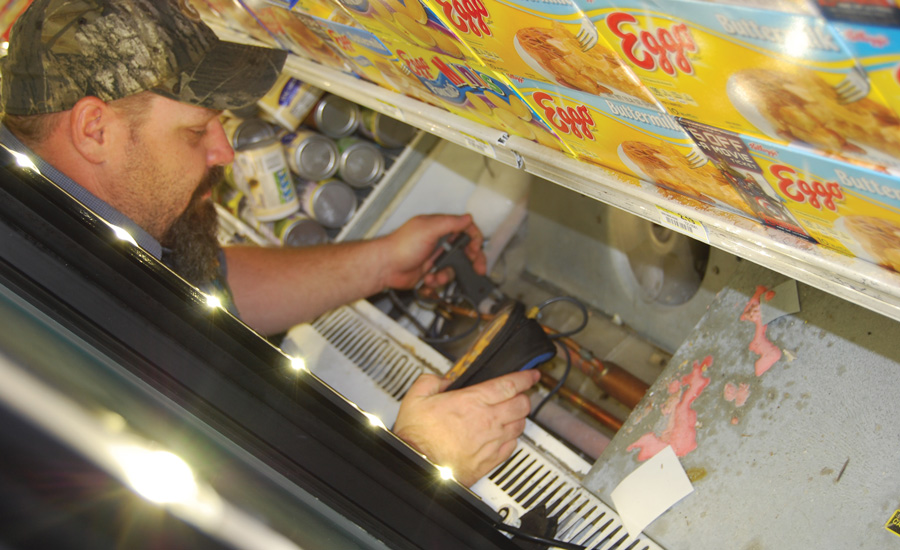 RETROFIT PLANNING: Wright Brothers Inc. currently services a CO2 system and is in the process of planning its first full retrofit with an HFC/HFO blend.

“The most recent court ruling [that the Environmental Protection Agency (EPA) does not have the authority to delist HFC refrigerants] seems to have placed a lot of uncertainty in the refrigerant market,” said Wright. “Manufacturers are shipping systems that use refrigerants that were previously delisted. Confusion is never good, but we have to work out the details and proceed forward regardless of the refrigerant market climate.”

Wright is doing just that, having taken training classes from the Refrigeration Service Engineers Society (RSES) in hydrocarbon refrigerants, even though his company has not yet worked on this type of system. His company does currently service a CO2 cascade system with an HFC top cycle in a supermarket and is in the process of planning its first full retrofit with an HFC/HFO blend.

Some larger supermarket chains are moving to CO2, but it is more of a niche market at this time, said Andy Schoen, customer services manager, Sanhua Intl., Dallas.

However, the majority of supermarket chains are opting to keep their current equipment for as long as possible, noted Dave Demma, national accounts manager, United Refrigeration Inc., Provo, Utah. And while there are some supermarket chains that are switching to alternative refrigerants, it may have less to do with regulations and more to do with a desire to be green.

“Or, they may switch as part of the criteria to have a LEED-certified building (lower GWP) or if refrigerant companies are offering incentives,” he said.

Dick Wirz, co-owner of Refrigeration Training Services, Clifton, Virginia, agrees with this assessment, noting that while most supermarkets are not rushing to change to low-GWP refrigerants, a lot depends on their individual business model.

“Are they trying to show themselves as being environmentally friendly?,” he asked. “If so, they are switching to CO2 like Walmart, Target, and a few others. Otherwise, the smaller players will wait until they are forced to change by federal regulations.”

“Some end users have designed and installed multiple sites [using alternative refrigerants], while others have only tried one location to get a feel for the technology while moving forward with HFC designs as their standard,” he said.

Outside of the supermarket arena, most commercial refrigeration contractors are also not embracing the new refrigerants or being proactive in obtaining the proper training in order to use them, according to Demma.

“Prior to the EPA delisting action being overturned in the courts, R-404A and R-507 were set to be delisted for use on any new commercial refrigeration application as of January 1, 2018,” he said. “Even so, I spoke with some contractors who stated that they would still use these refrigerants in new applications. There doesn’t seem to be much of a presence in regulation enforcement other than in the high-profile refrigerant users, such as supermarkets.”

While little additional training may be required for HFO blends, contractors should be proactive in obtaining the proper training and tools needed to install and service systems that utilize alternative refrigerants like propane, CO2, and ammonia. Because, as Brown noted, one of the major hurdles with new system types is the knowledge base of those servicing the systems.

“Without well-trained technicians to install and maintain these systems, many of the gains and efficiencies that come along with them are lost,” said Brown. “It can be expected that contractors will see more of an investment on these system types, due to the additional components and controls logic used to run the systems appropriately and safely. This, in turn, means additional levels of checks to complete, and logic to comprehend that would not otherwise be encountered in a HFC system.”

There are also significant safety concerns regarding some of the alternative refrigerants, including their toxicity and the consequences of a leak in a human-occupied space, noted Brown. To address these safety issues, many natural refrigerant systems have additional components designed into them, including the use of material types that would not be seen with an HFC system, as well as electronic safeties to handle emergency situations.

“There are also more stringent requirements on some aspects of the system — for example, pulling a vacuum to remove additional levels of moisture to ensure the system will not incur a catastrophic failure early in its lifetime,” said Brown.

While the use of alternative refrigerants will present manufacturers, contractors, and technicians with many challenges, said Wirz, the EPA regulations in the 1990s also caused much consternation, but the industry came through just fine.

“In the process, we not only corrected a serious environmental danger, but for most contractors and technicians, it proved to be — and continues to be — financially rewarding,” he said. “The long-term effect of our current use of refrigerants has been scientifically proven to be damaging to our environment, and to not do our part would not only be selfish, but cowardly.

“I truly believe the HVACR industry, and indeed our country, is better than that,” Wirz added.