Luxury and HVAC combine into a creative solution

Fifteen years ago, Douglas and Kathleen DeAngelis’ home in Lancaster, Pennsylvania, was built for spacious luxury. It wasn’t until recently that the owners dialed in on the home’s comfort systems — just in time for the winter of 2018-2019, when January temps dipped as low as minus 10°F.

The 5,900-square-foot, radiantly-heated home, now renovated and modernized, is perched on a gentle rise above the Conestoga River in the heart of Pennsylvania Amish country. When the house was originally constructed, Douglas DeAngelis’ one prerequisite was radiant heat. Both he and Kathleen grew up in New England, the bedrock of hydronics in the U.S.

“We were determined to have hydronic heat again,” said Kathleen DeAngelis. “We both love the fact that the radiant heating system doesn’t interfere with furniture placement, and that there are no registers or baseboard to contend with. I’m delighted to have all solid surfaces for the flooring, and yet still have warm feet.”

As a retired Navy aircraft electrician, Douglas DeAngelis was no stranger to technology. While Kathleen focused on comfort and the design benefits of radiant heat, he was looking more at the functionality of the system: chiefly, fuel efficiency and energy savings.

“I insisted on high efficiency systems and the best means of distributing heat throughout the home,” he said.

The first floor’s finished spaces are heated by stapled-up EPDM rubber Onix™ radiant tubing, attached to the subfloor with no need for transmission plates. 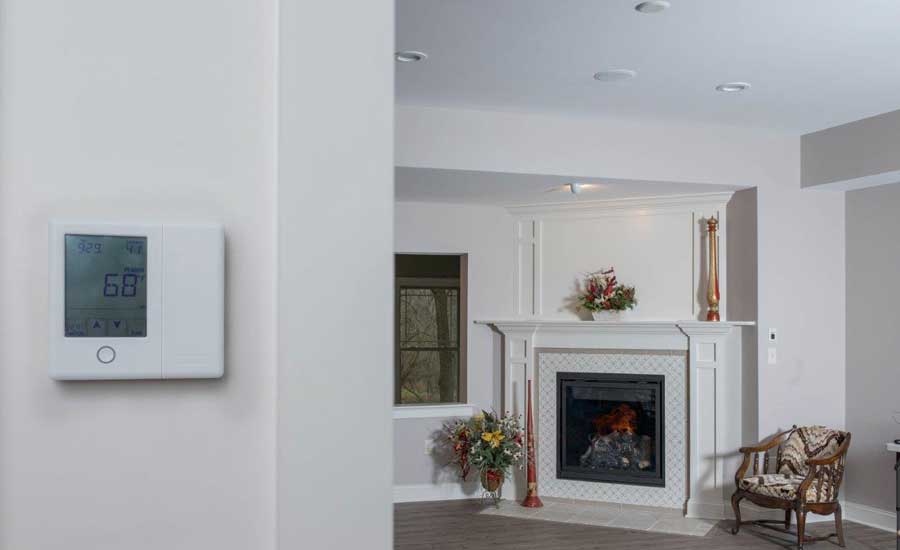 TEMPERATURE TWIST: Seven different zones allow the DeAngelis to have a warm living room, a cool bedroom, and warmer sleeping conditions for guests.

“Back in ’04, we decided to break the home’s main 3,160-square-foot section into seven separate heating zones,” said Douglas DeAngelis. “The zones gave us tremendous control and flexibility over how the heat’s applied.”

“We could do it all with radiant,” said Kathleen DeAngelis.

With the latest renovation, the home’s unfinished 2,800-square-foot daylight basement space was completed. It was an easy task with the heating system, because the large slab has been “radiant-ready” with three zones from inception, plus a fourth from when the pad for a future sunroom was added in 2008.

Before the slab was poured in 2004, over 4,400 linear feet of Watts RadiantPEX tubing was attached to rewire there, awaiting its later use. So for 15 years, the basement level represented the home’s final frontier.

Completion of the home’s luxurious lower level finally came to fruition just before winter struck. Now, the wide-open, radiantly-heated slab and 10-foot ceiling height provide ample room for a second master suite with bath, two additional bedrooms, a full bath, kitchenette, and sunroom — divided into four zones for ideal control of the radiant heat — bringing the house to a total of six bedrooms, four full baths, and one powder room. RadiantPEX tubing was also used to transport heat to the garage, heated by hydro-air.

“We also chose to install two zones of electric heat under the tile in our master bath and laundry room/powder room areas,” said Kathleen DeAngelis. They chose Watts SunTouch electric mat because of the ease of installation. “The electric radiant is great for warming the floors during the fall and spring seasons, when we may not want to use the main radiant heat system for house heat.”

A MECHANICAL ROOM TO SHOWCASE

Douglas DeAngelis’ ambitious mechanical system plans granted an opportunity for the ultimate showpiece: in his words, “a mechanical room to die for.”

The 20- by 25-foot room — now fully modernized with a new heat plant, controls, and circulators — is unquestionably a mechanical masterpiece. The initial installations and the large, custom-built hydronic panel were the result of a long collaboration between Douglas DeAngelis and Vince Youndt, president of Stevens, Pennsylvania-based Vertex Mechanical.

“The final design uses remote manifolds to help reduce the amount of tubing loss, to increase head pressure at the manifolds, and to keep all system components well organized and sensible,” said Youndt. “We generally like to fabricate our manifold/circulator wall panels in the shop, and in a single piece. But we soon saw that the size and weight of this one would require three separate sections. We estimated the weight to be around 450 pounds, with dimensions of 8 feet high and 12 feet wide.”

Youndt and installers designed the panel to be constructed of three separate, interconnecting mechanical panels that later required some extra unions and precise pipefitting in the field.

According to Youndt, the DeAngelis’ radiant heat system — which has performed admirably through 15 winters — operates in four temperatures; three of them are on outdoor reset. There’s an indirect-fired water heater and hydro-air blower coil running at 165°F whenever they call for heat; these are located in the buffer loop. The primary loop operates at 140°F, with mix-down from that to secondary loops using variable speed injection. At full load, temps in secondary loops dial in at 128°F, 109°F, and 98°F.

The 128°F temps are for the staple-up areas with hardwood flooring above; 109°F for staple-up under tiles; and 98°F for basement in-slab and sunroom use.

Through the years, a new vision to optimize the DeAngelis’ hydronic system emerge. Douglas DeAngelis met occasionally and compared notes with a fellow he described as a “mechanical savant” — Harry Papazian, owner of Staten Island, New York-based Bridge Mechanical. 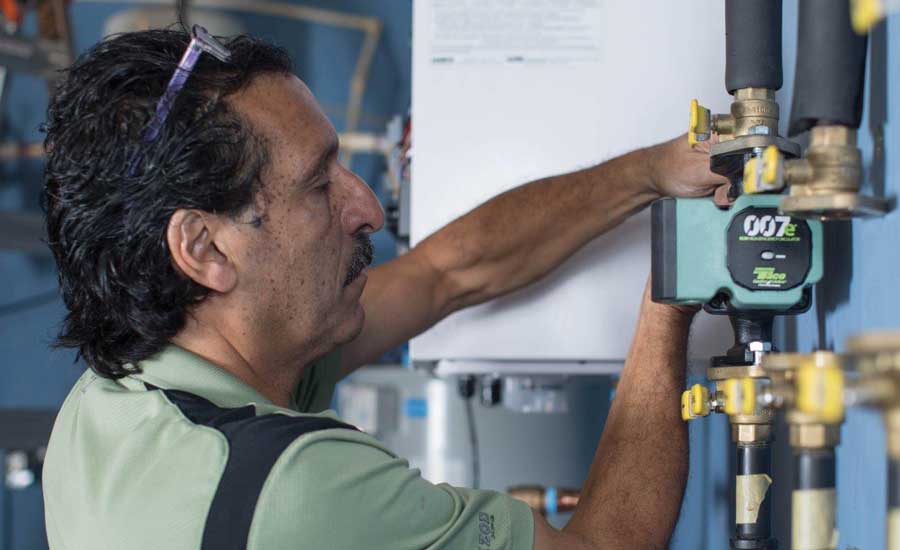 “Douglas and I chose the Taco 00e series circs, developed with ECM variable-speed technology to use up to 85 percent less electricity,” Papazian continued. “I’m especially fond of the 00e because of the bio-barrier that protects internal components from system contaminants. And there’s a feature that also purges air and unblocks the pump to keep it trouble-free at start-up.” 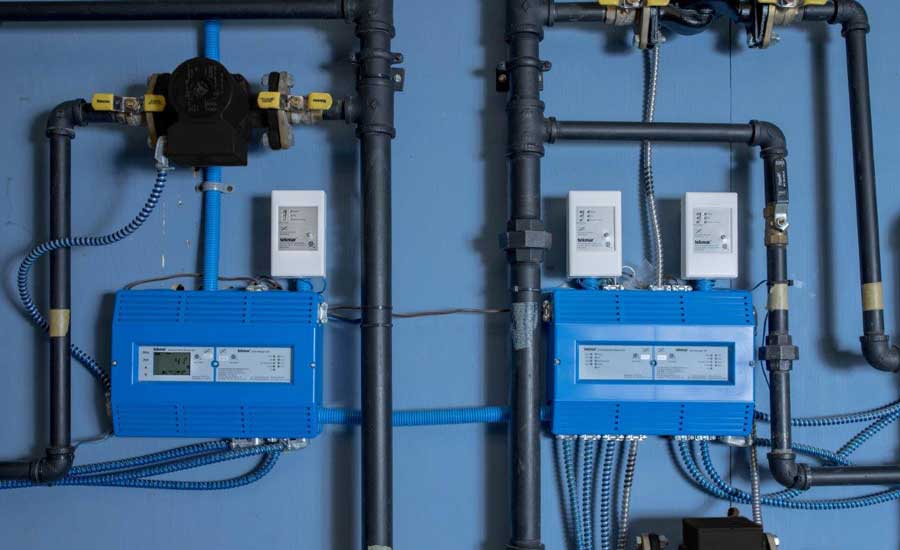 “But things have improved substantially in 15 years,” said Papazian. He and Douglas DeAngelis decided to update the existing controls; they selected tekmar’s Universal Reset Module 423 paired with tekmar’s Zone Manager 334, Mixing Expansion Module 444s and a tekmarNet® Internet Gateway — designed to operate all of the mechanical equipment while coordinating their operation through network communication.

“The 423 can be used in applications ranging from a single zone of baseboard with an on/off boiler, to four temperature systems composed of multiple fan coils, baseboard, mixed radiant floor zones, and two modulating/condensing boilers,” added Papazian. “It regulates up to four space-heating water temperatures through outdoor reset and indoor temperature feedback.

“It’s capable of controlling two on/off or modulating boilers, domestic hot water, and setpoint loads, and it can expand up to 24 zones for each space heating water temperature,” he continued. “The tekmar Zone Manager at Douglas and Kathleen’s home is designed to provide zoning solution for two-wire tekmarNet® thermostats.” 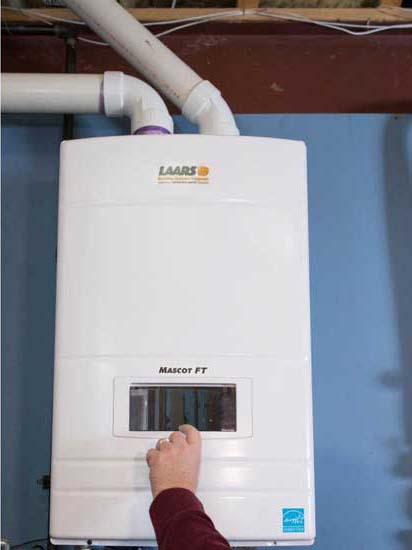 KNOW WHAT WORKS: A Laars Mascot FT boiler was chosen to replace the original Laars heat plant because it had worked so well in the past.

“Early on, I learned that high efficiency condensing boilers work more efficiently with cool return water temperatures — and that’s the way our system was constructed initially — so we chose a new Laars Mascot FT boiler to replace the original Laars heat plant because it served us so well,” said Douglas DeAngelis.

“I honestly don’t think we could improve on the home’s mechanical systems,” said Douglas DeAngelis. “At last, it all came together perfectly.”