What Happens When HVAC Competitors Cooperate?

Everyone knows a group of geese is called a gaggle. In the animal world, they are joined by a stand of flamingos, a pride of lions, and a pandemonium of parrots. But what is the proper name for a grouping of contractors? Would they be a cohort of contractors? A service of technicians?

The answer is unclear. But when the group comprises leaders of seven HVAC contractors in the Dallas area who form a loose confederation for coordinated marketing efforts and shared customer service standards, the accurate name is Five Star Guys.

Ben Stark, owner and manager of Sunny Service in Hurst, Texas, may be the closest thing to a common thread for this group. 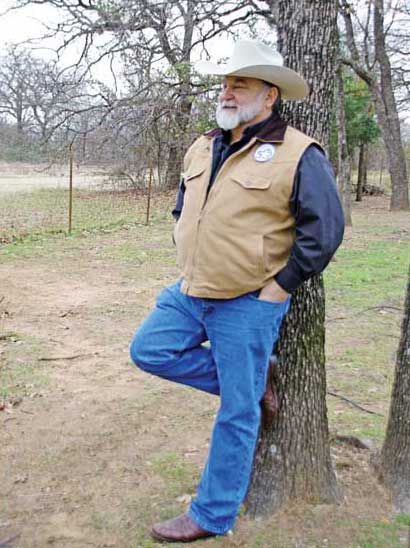 FRUITS OF HIS LABOR: Ben Stark, managing partner of Sunny Service in Hurst, Texas, watches during the commercial shoot for Five Star Guys, the group he worked to bring together after years of good rapport and industry activities.

“Several of the companies are second- and third-generation,” he said, “so most of us go back through many years of industry involvement and charity work.”

Each owner in Five Star Guys is also a member of Service Nation Alliance, and Stark said that assorted friendships developed there and through ACCA participation as well.

But, one might wonder: They are still competitors, right? Correct. If everything really is bigger in Texas, that also holds true for the size of the competition in the HVAC business. This environment nudged the group that much closer to joining forces, Joe Strittmatter of Strittmatter Plumbing, Air Conditioning, Heating & Roofing in Denton, Texas, recounted.

“We were looking for a way to compete with the larger companies in our area, who have the resources to market on a large scale,” he said. “Once Ben approached me with the idea, I knew he was on to something, and with his background, it would be big.”

Pooling ad dollars wasn’t the only thing, though.

“We were looking to create a coalition of companies that had the same vision, same culture of our team, same core values, and deliver it to every home we could come in contact with,” said Trapper Barnes, president of Infinity Texas Air, who lists Stark as his first mentor in the business.

While members had various tangible and intangible connections already, some formal requirements solidified the arrangement when they created Five Star Guys. Robin Jones of Tattered Suit coordinates the group’s marketing and advertising efforts. She reported that members had to maintain at least a 4.6 average customer rating; commit to background checks, drug testing, and extensive training for every employee; and offer a 100 percent money-back satisfaction guarantee, for starters.

Jones and Five Star Guys pivoted their shared service commitments to their highest-visibility marketing effort so far: The Oath.

Posted on the Five Star Guys website, The Oath outlines those guarantees and adds “more guarantees and warranties than you can shake a stick at,” plus perhaps the most memorable promise: “To not teach your kids new words or spit in your yard.”

In addition to messaging via the group’s website, Facebook, and radio spots, Jones also coordinated a television commercial featuring the guys hanging out around a fire and then taking the vow.

“Trapper Barnes was ‘elected’ to be the lead, and by the looks of things, he stepped into his role incredibly well,” Jones assessed.

In fact, “his dramatic pause before he raises his head to say The Oath was so inspiring that everyone on the set started calling him ‘Clooney.’”

Steve Lauten of Total Air & Heat in Dallas and Plano had known Stark for over 30 years and summarized that while the commercial shoot “was a long, cold day,” they enjoyed seeing all the members come to life on the small screen and that the experience provided a chance to further strengthen their bonds.

If a consumer hears about Five Star Guys and goes to fivestarguys.com, the website asks them to enter their zip code.

“We started by mapping 10 zip codes in the partner members’ area. Members had to agree who would ‘own’ a zip code, as many had overlapping areas,” Jones said.

From there, they also assigned temporary zip codes on top of the areas they already owned. This two-tiered approach not only allows the group to cover most of the Dallas/Fort Worth metroplex for now, but it provides potential zip codes for a hypothetical new member to own upon joining. 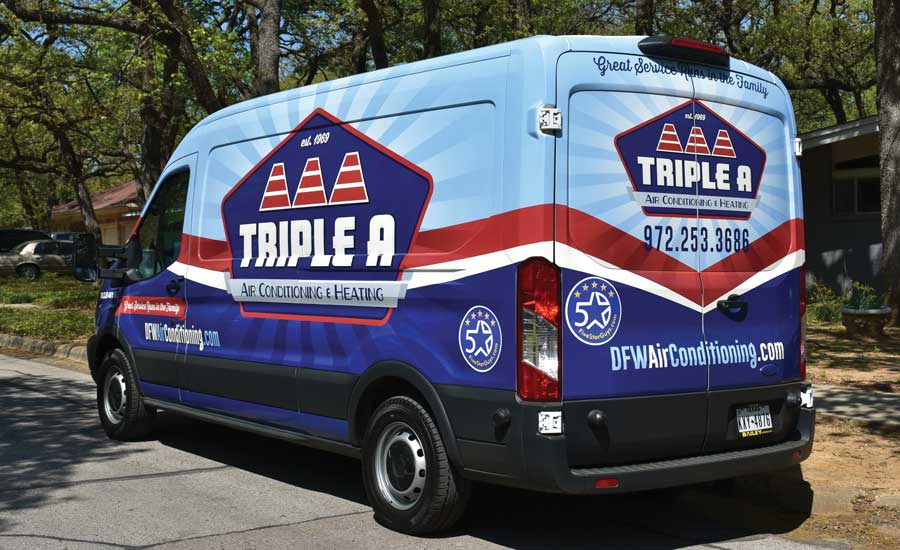 SUPPORTING ROLE: This service vehicle from Triple A Heating & Air Conditioning in Flower Mound, Texas, illustrates how the group incorporates the Five Star Guys logo within the context of each company’s own approach for trucks, shirts, and more.

Keith Neff owns Triple A Air Conditioning in Irving. He described why dividing up territory was not as difficult as some might think, outlining how his company’s service area had already overlapped with two other members’ areas.

Before Five Star Guys formed, “even if we didn’t get the job, we knew that the other company would take great care of the customer,” Neff said. “Also, if we did get a call out of our service area, we would send it to one of the other companies that are now in [the group].”

Some member companies, he recounted, also had already coordinated some combined training classes to keep costs down.

Of course, all of this effort leads nowhere without follow-up in the form of successful technician visits and satisfied customers. To that extent, the customer ratings that the separate businesses had earned and which eventually led to the coalition’s name have served as the proof in that pudding.

“We’ve discussed employee retention, training, and customer service methods, too,” said Lauten. “All with a single focus: We know we are the best options for consumers, so how do we best make the consumers aware of what makes the Five Star Guys so special?”

How to make consumers aware, indeed.

Jones said that after meeting with the group a few times, they were obviously “the good guys — the ones you’d have over for supper.” All being from Texas and exuding what she described as “a ‘cowboy’ type feel,” that combined with the high ratings to spur the Five Star name.

A group with that monicker needs a logo — and in particular, a badge — and that was designed by Chanda Huff at Service Nation Alliance.

(Jones and Huff aren’t the only key women in this narrative, by the way. Strittmatter made a point to call out the women in their businesses. “My wife, Tawnya, is the leader of our team,” he said. He describes her as “the glue that holds the thing together.”)

Members use the badge, which is sized to complement, not compete with, their own branding on shirts, trucks, and websites. The truck decals are 12 inches, and the shirt patches are 3 inches.

From logos and local spots, the marketing plan is expanding.

“We are going to start getting in front of our customers in person with some strategic Home and Garden and women’s shows,” Jones outlines.

Circling back to charitable activities, the Guys’ next late-summer local media campaign is said to focus on “The Gift of Comfort,” which is planned to involve awarding a new air conditioning system to someone in need.

Expansion with an eye toward more efficiencies and opportunities is on the radar for the operational side of Five Star Guys too.

“The list of things we can do with this group is still growing,” Neff said, “from buying power with distributors and suppliers to eventually having our own call center that could book the appointments for each company.”

At the end of the day, the experience so far has highlighted the mutually beneficial nature of the concept.

“Everyone has different ideas and methods when it comes to marketing, even things I never thought or heard of,” Strittmatter said. “The same is true about how they run their business. Now, we all get to learn from each other and better the group as a whole, which should mean a better experience for our customers.”

That effort continues as the group works to refine a formula that others could replicate in their own areas — assuming, of course, that their region contained the right construct of contractors and at least one “Clooney.”

The music industry is full of overnight sensations who actually toiled for years to get to that point. Likewise, Five Star Guys may be new as an organized effort, but the member companies’ levels of performance were already well-established.

So were several individual relationships among the friendly competitors, thanks to aforementioned training efforts, charity work, dealer meetings, and association memberships.

So could a random bunch of contractors get in a room for the first time and make this sort of thing work? The financial investment is real. Odds for success seem a lot better if some of those shared experiences and opportunities to build some trust were already in place.

Even if they are in place, however, Ben Stark, managing partner at Sunny Service in Hurst, Texas, observed that there are still some best practice ideas to consider.

“My recommendation would be to start small, have agreements in writing, and also a way out of agreements,” he said. “Have documents created by an attorney.

“Set budgets all can financially live with,” Stark continued, “and build a capital fund that covers the unexpected. Members must have an executive board of final decision-makers. Many hours of problem-solving have gotten us to this point in time, and we are still working out the kinks in the system.”

Speaking of budget, that requires a plan too.

“We prepared a budget for the calendar year that we adjust and review each quarter. The budget includes marketing personnel, marketing efforts, production, advertising, and telephone structure,” explained Jones.

“At the end of each quarter, we review the forecast for the upcoming quarter and divide the financial need by the number of companies in the group. Everyone puts their 1/7 in to get great exposure. If we decide to beef up the marketing with a new distribution method, the members meet to discuss and agree how to move forward.”

With any luck, the end result exceeds the sum of its parts in every aspect.

“We learned a long time ago that we don’t know it all,” said Trapper Barnes, president of Texas Infinity Air. “A group of minds with out-of-the-box thinking brings power to the numbers.” 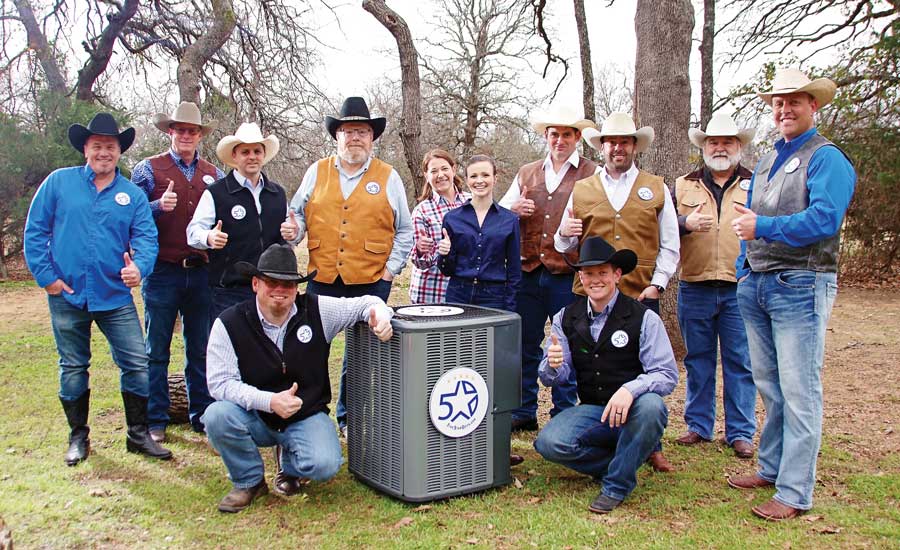 Security and the Smart Thermostat: Prepare for Customer Questions

International Code Council Stirs Up Its Mix of Codemakers

What Will Midterms Mean for HVAC?

When Discussing Efficiency Upgrades, the HERS Index Helps

HVAC Industry Rallies Around Families of Fallen Techs After Shooting