This website requires certain cookies to work and uses other cookies to help you have the best experience. By visiting this website, certain cookies have already been set, which you may delete and block. By closing this message or continuing to use our site, you agree to the use of cookies. Visit our updated privacy and cookie policy to learn more.
Home » Gustave A. Larson Co. Continues to Deliver Legendary HVACR Customer Service
Distribution TrendsHVAC Distribution News

For more than 80 years, the name Gustave A. Larson has been synonymous with wholesale excellence. From its humble beginnings in Madison, Wisconsin, to its modern-day distribution enterprise that includes 52 locations stretching from Ohio to Idaho, the company continues to deliver the right mix of personalized services, expertise, training, and products necessary to fulfill the needs of HVACR contractors when and where they need it.

“We don’t sell anything – our customers do,” said Andrew Larson, CEO and chairman, Gustave A. Larson Co. “As a result, our focus is on helping our customers maximize their success at all times.”

In the 1900s, Gustave A. Larson, a Swedish immigrant, navigated his way to America through Ellis Island. After settling in Chicago with an uncle, he was determined to make a buck any entrepreneurial way possible – from performing as an acrobat to peddling goods as a traveling salesman.

While working in sales, Gustave A. Larson began hauling ice for ice boxes, which served as his introduction to commercial refrigeration. He began travelling throughout the upper Midwest, concentrating his efforts on selling products to ammonia-based ice-making plants.

During these travels, he identified a need for a refrigeration supply house in Wisconsin. Thus, in 1936, the Gustave A. Larson Co. was born.

The Midwest market responded very favorably to Gustave A. Larson’s approach. Within a year, the company expanded into Illinois. Very shortly thereafter, more branches were opened throughout Wisconsin in Milwaukee, Oshkosh, Appleton, Green Bay, Wausau, and Eau Claire. By the early 1960s, the company owned and operated 20 locations in Illinois, Iowa, Wisconsin, and Florida.

In 1960, Gustave A. Larson’s son, Karl Larson, became president, CEO, and chairman of the company — a role he served until his passing in 2012. Under his tutelage, the company continued its astounding growth to include 47 branches in 13 states.

In the 1990s, two of Karl Larson’s sons, Andrew and Scott, returned to lead the company. Andrew currently serves as chairman and CEO and Scott as president. 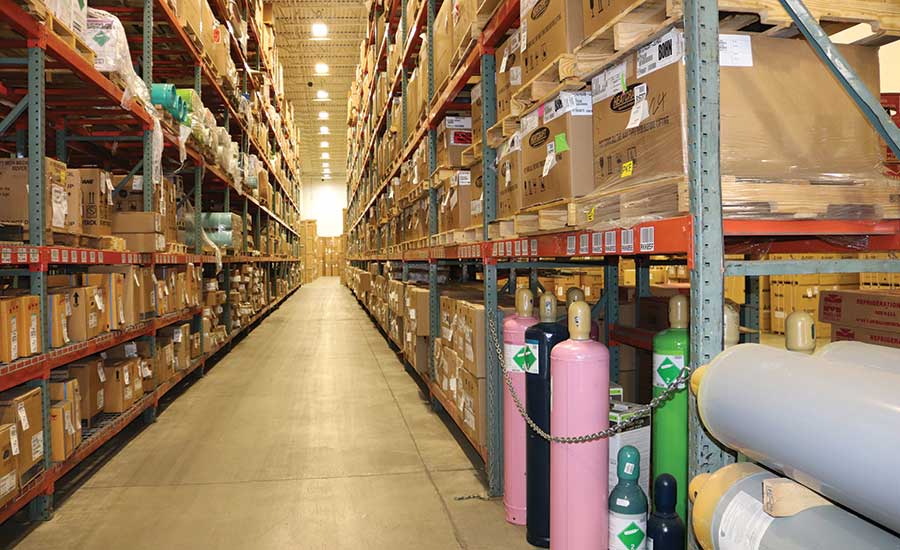 While both worked in the warehouse as adolescents, neither envisioned long-term careers in HVAC distribution. Both earned MBAs and held jobs outside of the industry. Andrew worked as a financial analyst and product manager before returning to the company in March of 1994 and Scott worked for an investment bank in Germany as well as in the financial department for a Global 500 company before returning in March of 1998.

“Working for a large corporation was quite frustrating,” Scott Larson said. “I was one of many employees in a massive conglomerate. My impact was quite small in the sense of the overall business. The decisions Andrew and I make on a daily basis at Gustave A. Larson impact our customers, employees, suppliers, and their families. When we rejoined the company, we yearned to prove ourselves, and that was very important for us.”

The company services these locations through two distribution centers, one in Pewaukee, Wisconsin, and another in Laramie, Wyoming.

“The Wyoming location was necessary to keep up with our Western acquisitions,” said Scott Larson. “We purchased portions of Pameco Corp. in 2003, which added 14 physical locations and helped us expand our refrigeration business out west. The company also acquired Jensen-Klich Supply Co. that year, which added five locations in Iowa and Nebraska.”

“It was a little bit difficult to reach those western locations from our Pewaukee DC, so we opened the Laramie DC,” said Andrew Larson. “This dual-pronged approach has helped us serve our customers. A lot of folks can be wholesalers and sell HVAC refrigeration, but being a world-class distribution company was a dream of our father, and we believe we’ve achieved that today.”

Gustave A. Larson Co. tracks a number of metrics across its branches and relies on fact-based decision-making to guide its operations. The company relies on its “True Fill Rate” to define what a perfect order looks like from the customer’s perspective. 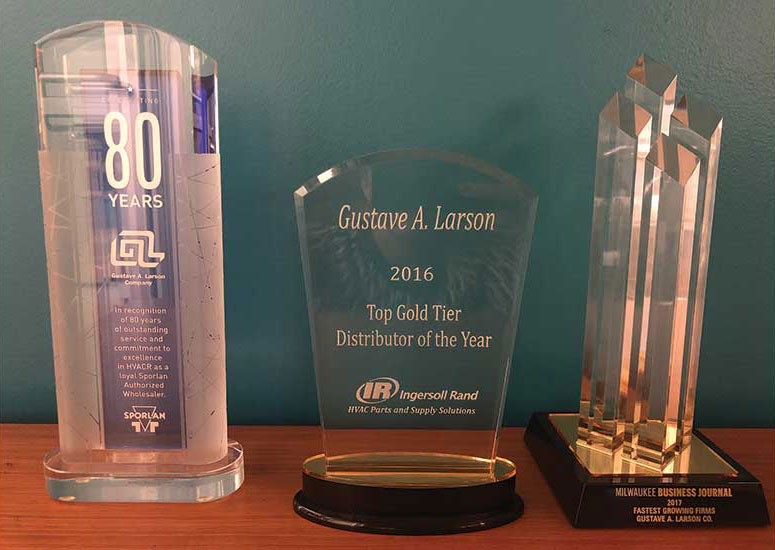 “The True Fill Rate incorporates many factors, including was it the right product at the right price, were we able to get it to the customers when and where they wanted it, was it undamaged, and was it what they actually needed,” said Dan Benischek, vice president of operations, Gustave A. Larson Co. “If all of those factors are correct, we call that a perfect order. We track these on a daily basis across all our branches. We also take a look at all of this data on a monthly basis, which allows us to identify where we’re succeeding and how we can improve.”

The wholesaler also utilizes data-driven statistics to track success across numerous metrics at the branch level.

Brad Lamers, CFO, Gustave A. Larson Co., calls the project one of the most significant developments in his nearly eight years with the company.

“From a matter of efficiency, the information we’re able to track and get out of this system is phenomenal,” Lamers said. “We can get the necessary data in the hands of our managers much more quickly, which allows them to make decisions more efficiently. Our former system was 40-plus years old. It served its purpose very well, but times have changed. For us to be able to respond and implement our world-class strategy, we needed a new system behind it.”

The company first started discussing upgrading its ERP back in 2015. After narrowing its search to 15 different systems, the Prophet 21 was selected in 2016.

“We chose the Prophet 21 system because its functionality served our needs very well, and it accomplished what we were looking for in an ERP,” Lamers said.

The company aimed to implement the system in 2017 but elected to delay the deployment date to ensure the system was as streamlined as possible.

“When we flipped the switch, we wanted it to be transparent to the customer,” Lamers said. “Across all 52 locations, it was our goal to continue forward in a way that our customers were never aware that we implemented a new system. We aimed to still service a customer, provide products, invoice, find products in our warehouses, and ship them off without a hiccup.

“Now, of course, with every conversion of this scale, there is a ‘transitionary’ period to achieve full functionality,” Lamers continued. “While there were some surprises, we feel good about where we are right now and where we will ultimately be.”

Had the Great Recession not happened, this transaction probably would have happened a decade ago, Scott Larson said.

“We closed on an acquisition in 2009, which made it nearly impossible to focus on this upgrade,” he said. “We needed to regroup as an organization. Once that happened, and once things seemed clear from an economic headwinds perspective, we made some calculated decisions in terms of the man hours, labor savings, and what we would have to do to keep our current systems operating. From a future perspective, we determined it was the right time regarding the productivity of our organization. We plan on utilizing this platform for the next 10-20 years, which, from an ownership perspective, is a statement toward our investment into our future and the future of the industry.”

At the end of the day, fulfilling the customer’s needs is the most important metric at Gustave A. Larson Co. For 82 years, the company has prided itself on its “Legendary Customer Service.”

“No matter what industry you’re working in, you’re going to have issues,” said Andrew Larson. “The key is, how can we navigate through these issues by the time the customers get the product in a way that they don’t even know these problems existed? We’re focused on what we can do to go above and beyond. Our culture is defined by our desire to go the extra mile to take care of our customers. We’ll throw parts in the back of a pickup truck and drive them out there if we have to.”