It’s complicated, so contractors need to make sure they are educated

The first step toward handling duct leakage successfully is a pretty straightforward piece of advice for working in the field.

He has experienced both the contractor and manufacturer sides of this issue. Frederick Air has worked with Aeroseal in the past, and Schmidt worked for the manufacturer himself for a while. In fact, one thing he did there was design the training for dealers on how to talk to customers about duct leakage.

As common as the problem is, talking for a while with Schmidt made clear that it’s also very easy to go in with less-than-adequate knowledge for solving the problem in customers’ homes due to all the possible variables in play. Not everyone puts ACCA Manual D (Residental Duct Systems) or ACCA Manual J (Residential Load Calculations) at the top of their summer reading list. So now what?

One consistently wise tactic is for contractors to undersell homeowners on what they can do for them. 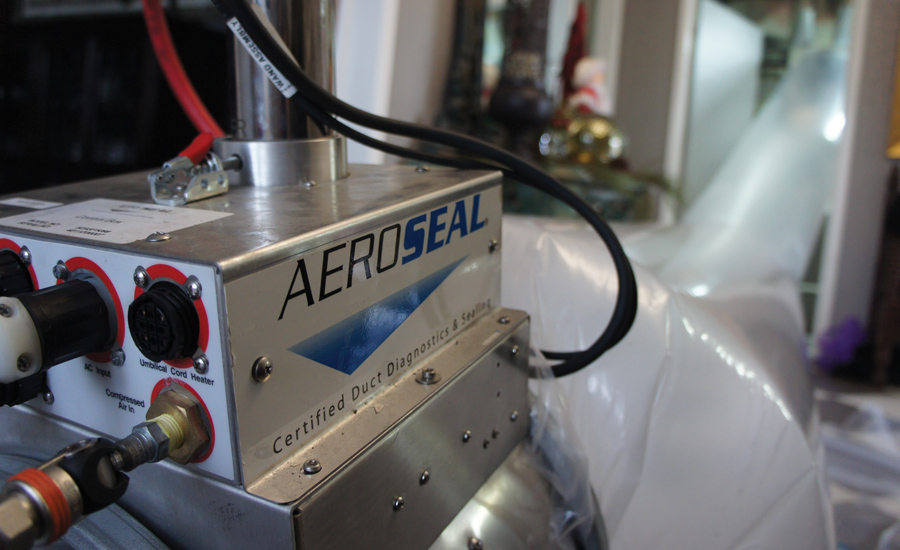 SLEUTHING AND SEALING: Sealing the ducts from within is one option for existing homes. The bigger challenge might be identifying duct leakage, since owners aren’t aware of it and may report assorted symptoms.

“If you come in and they’ve got a crawl space system, you either use the Aeroseal product, or you go in and use spray foam or use mastic over the whole thing, and you get the customer perfect temperature in all their rooms, that’s fantastic,” said Schmidt. “But what if you told them that you were going to get them perfect temperature in all their rooms, and you can’t get those last couple pieces [figured out]? Now …”

Schmidt trailed off there, and that’s because everyone reading this article knows there will be no stellar reviews or word-of-mouth clients sprouting from this service call.

It’s pretty safe to say that most contractors will not receive a call from a customer identifying leaky ducts as the issue.

“In fact,” said Gary Marowske, president of Flame Heating, Cooling, Plumbing and Electrical in Warren, Michigan, “there is minimal discussion in Michigan regarding duct leakage (at all) unless there are extenuating circumstances.”

Marowske said hot or cold spots in the attic or the basement are the most frequent customer reports that point him toward duct leakage.

“When I am in people’s houses talking about this, I always check around the edge of their carpet,” said Schmidt. “You have this line of dirt and dust, and that actually is your carpet acting as a filter. A lot of times, if you have excess air behind your walls, that’s going to force its way out underneath those baseboards, and then it’s going to carry in the dirt and dust. So it’s not that you don’t know how to vacuum. It’s that you’re constantly getting dirt and dust coming into that little corner there, coming from behind the wall, because of supply leakage.”

HOW BIG IS THE PROBLEM?

Duct leakage is a problem — it’s big, and it’s stealthy. The Department of Energy’s (DOE’s) Energy Star page on duct sealing claims that a typical house loses 20 to 30 percent of its conditioned air short of where it was supposed to be delivered. It doesn’t take an expert to recognize that will have a negative effect on not only utility costs, but on comfort, too. It might also create a negative impression in many customers’ minds regarding the system’s equipment (or its installer). 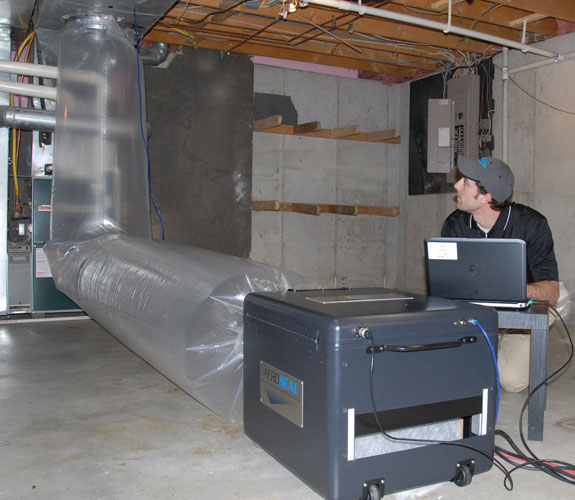 WE’RE LOSING AIR: The Department of Energy’s (DOE’s) Energy Star page on duct sealing claims that a typical house loses 20 to 30 percent of its conditioned air short of where it was supposed to be delivered.

That wouldn’t be deserved, but it wouldn’t be surprising, since ductwork tends to have a much lower profile in consumer awareness than a furnace, a/c unit, etc. The fact that it gets replaced even less frequently than the “major” equipment, if ever, and the fact that contractors don’t go around promoting sales or new advancements in typical metal ductwork only helps the problem stay under the radar.

Of course, things aren’t so dire in new construction now because of duct testing requirements. But that leaves hundreds of thousands of existing homes, including many that were perhaps built on a tight schedule or without thought given to that kind of check.

“Unfortunately,” Marowske said, “neither contractors nor customers embrace it [as something to address]. The payback versus cost is not seen by the customer. In Michigan, most duct systems are in basements and accessible, but there are minimal programs or incentives to entice customers to seal ducts.”

Schmidt does see awareness moving gradually in the right direction on both the consumer and contractor sides. On the contractor side, he said, anybody in the building trades knows about it as of the last few years.

“Sometimes they maybe know just enough to be dangerous, but they know about it,” he said. “Whereas before, even a couple of years ago, it was on nobody’s radar.”

He regularly had to explain what duct leakage is to homeowners when he started around 2000. But that’s changed, he said, and that reinforces why contractors have to be ready to at least diagnose the problem.

“The days when you could, for example, blame stack effect are over,” said Schmidt.

Customer willingness to just chalk it up to the way the house is, or to accept that there’s no comprehensive fix, is also decreasing, according to him.

Ironically, the habit of oversizing a home’s system served to mask the effects of duct leakage for a long time. It would push more cooling upstairs, but with the resulting shorter cycling, the humidity would accumulate, so the occupants were still uncomfortable because, as Schmidt pointed out, “we don’t really feel temperature; we feel humidity.”

While most any contractor needs to be able to at least recognize and explain the problem, many contractors may find that actually fixing it is far from the most profitable exercise. When Schmidt is asked what advice he would give to contractors from a business perspective, the answer is a little surprising. 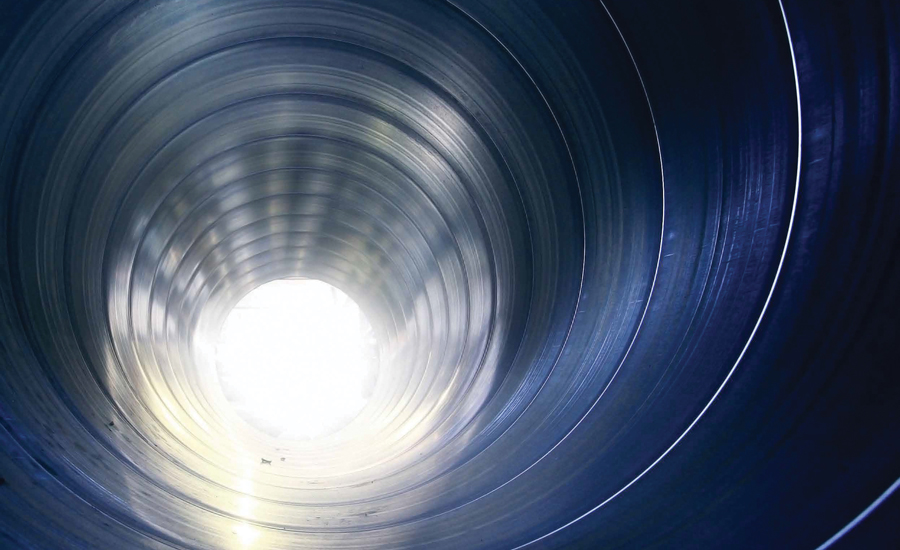 COVER IT UP: Ironically, the habit of oversizing a home’s system served to mask the effects of duct leakage for a long time.

The idea being that for many contractors (his company included), the payback is modest for the amount of time and resources required.

“If you can find someone who’s doing duct sealing work in your area, and a bunch of local contractors can agree to use that vendor for dealing with this type of work, well, now you have a solution to offer, which makes talking about the problem a lot more comfortable for everyone involved,” said Schmidt.

At this point, it’s worth mentioning that duct leakage is not strictly a residential problem. In a commercial setting, there are some similarities but also some differences in both environment and attitude.

From a client perspective, the focus in a home setting is more about comfort, but the attention in a commercial setting is more on how much the facility costs to condition and the desire to manage that as effectively as possible.

Along those lines, the commercial client (and the contractor of choice) has another potential weapon: avoiding metal ductwork altogether, either as a counter to an existing problem or to avoid the whole issue before it starts.

Andy Olson is the director of marketing for DuctSox, and just like Schmidt saw a pivot in awareness a few years ago, he has seen something similar.

According to him, changing out and adding fabric ducting to existing facilities has become a popular option versus the traditional metal ductwork.

Still, Olson reported that his company sees a 75/25 split between new construction and retrofits in revenue terms, noting that large assembly venue-type projects are usually new construction. With regard to number of jobs, he estimates retrofits take a slightly larger piece of that pie — more like 65/35.

Given that this type of product was basically nonexistent not too long ago, could owners still run into code issues?

“Not anymore,” Olson said. “In the early years, when code officials were unfamiliar with our product, it was an issue. In the last five to 10 years, the product has been written into code books, ASHRAE handbooks, and was even given its own UL category (UL 2518).”

He said this regulatory progress also contributed to the tipping point that happened a while back in the market.

Beyond learning about duct leakage, recognizing it, fixing it or referring the work to a specialty company, or even simply avoiding it altogether via other materials, there’s one more parting nugget of wisdom for the contractors who might walk into this situation tomorrow.

According to Schmidt, that little golden nugget is static pressure.

“A big problem with people starting to deal with this is that they’re not monitoring static pressure and their systems,” he said. “Instead of getting 15 years out of that system, you only get eight years because you seal the ductwork down to a system that was already too big. But it was kind of working because it was offsetting [the leak].”

Schmidt elaborates on how this ongoing monitoring will put contractors in a better position to recognize a variety of problems, not just duct leakage.

He also discussed how the evolution of variable-speed fans wind up offsetting the consequences of oversizing to some degree, too. But at the end of the day, that only goes so far, according to Schmidt.

“You should be always checking your customer’s static pressure, but especially if you’re going to do anything with changing things, because when you seal or unseal, add or remove ductwork, you’re changing the size of the ductwork, which goes back to that Manual D.”