This website requires certain cookies to work and uses other cookies to help you have the best experience. By visiting this website, certain cookies have already been set, which you may delete and block. By closing this message or continuing to use our site, you agree to the use of cookies. Visit our updated privacy and cookie policy to learn more.
Home » Mini-Split Public Awareness is Spreading
NewsHVAC Residential MarketHVAC Light Commercial MarketSplit SystemsTraining and Education for Contractors

“The application has really taken off in our area where clients have bonus rooms over garages that they are trying to heat and cool.”

For example, Steve Saunders, CEO of Tempo Partners, sees something different happening (or, not happening).

“In general, I do not sense any real movement toward mini splits in the Dallas/Fort Worth area in recent months,” he reported.

The projects he does see tend to be add-on or sunroom-type applications, not retrofit applications.

Other tales, like this one, hit the more classic mini-split notes and tackle more of the residence.

“We installed a multi-zone system for a client who lives in an older home,” said Michael Rosenberg, president of Rosenberg Indoor Comfort in San Antonio. “There was very little room to run ductwork, so this was a great option. The client is very happy with the comfort and their utility bills.”

Meanwhile, Chris Parker, president of Command Comfort in Los Alamitos, California, has observed that some creative mini-split designs — hybrid options such as combining a ducted system with ductless for the hot/cold spots — have been popping up more often, presenting more business opportunities.

The level and types of demand may vary from region to region, but word is getting around … right? 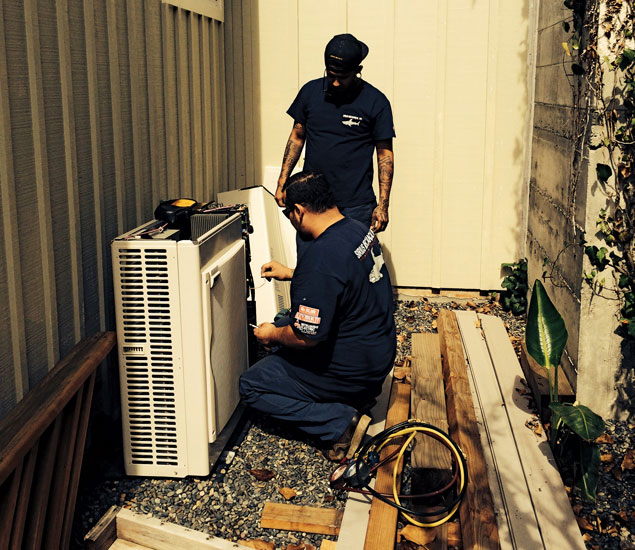 NO SIDE HUSTLE: A crew from Sirius Mechanical in Riverside, California, at work for a customer. Mini splits have grown to represent a large share of — or even all of — some companies’ installation load. Photo courtesy of Sirius Mechanical

“The public awareness of the ductless technology has been meteoric during the past year,” said Randy Scholnick of Sirius Mechanical in Riverside, California. “Every one of our clients has become a spokesperson for this technology, so our referral business has enabled us to not have to advertise at all. We are 100 percent dependent upon word-of-mouth. We have not spent one dime on marketing for Sirius Mechanical, and we don’t anticipate ever having to do so in the future.”

That might be the case for the rare contractor, but that doesn’t mean ad dollars aren’t getting spent elsewhere. Scholnick believes the early major leaders in this sector have significantly increased their television advertising and internet presence.

Knaak points to a bigger field of manufacturers now competing for that mini-split business as a reason for improved consumer awareness. With even more companies making this type of equipment, he said, the result is a larger overall marketing spend by the manufacturers, raising the profile of the basic technology’s capabilities.

“We will market the products in our client newsletter and on our website,” he said. “But most of the time, it is brought up by our project managers during the home visit as the solution to a problem the client is having.”

Parker’s company takes contractor marketing further, and he considers driving awareness to be a core task.

“I still believe that most people don’t know or believe [mini splits] to be an option for them due to lack of knowledge about it,” Parker said. “However, when they discover it and what it can do, most are all for it.

“We have found that targeted marketing is best [as opposed to] widespread campaigns,” he continued. “We have identified certain home types and consumers who are most likely to be a good fit for multi-zone applications, and that is who we seek when spending money to advertise, which we do quite a bit of.”

Saunders sees the push coming from a different point in the supply chain, and he also tries to put some of the buzz in context.

“Every wholesaler has a rep specializing in mini splits, and growth overall is reported as strong,” he said. “That is strong on a percent basis … [but] off of a small base,” he said. “So, I have yet to be much excited.”

The equation for mini-split demand nationally seems to be more positive and more complicated.

Scholnick can point to a couple of other variables. He said the changes to Title 24 and California Energy Commission standards make a difference in his area, as some municipalities have relaxed their standards to reflect the different approach and equipment of mini-split systems. He personally worked in favor of updating what’s on the books in one city: Newport Beach.

As a result, the city’s building department has waived all HERS requirements due to their high-efficiency output and the fact that there’s no duct testing to undertake.

“I now have absolutely no problem pulling a mechanical/electrical permit, since all of the permit technicians and building inspectors are keenly aware of these systems,” said Scholnick.

Beyond cutting down on red tape, Scholnick thinks the natural evolution of the equipment is making a difference, too.

“We are seeing upgrades to the multi-zone heat pump condensers (5 tons now available, which means you can install up to 6 tons of connected fan coils on one system — up to a 3,000-square-foot home), which weren’t available five years ago.”

And the last element of this sort of “perfect storm” that’s cultivating mini-split interest is climate change.

“Dehumidification from these systems is now almost as important as cooling and heating functions,” Scholnick said, “given the higher heat index rates the last five years.”

MEANWHILE, BACK AT THE OFFICE …

On the business side of things, what, if anything, are contractors doing internally to take advantage of the mini-split march on market share? Let’s start with the least affected and move toward the more involved.

“At Tempo, we study inverter driven technology a lot,” said Saunders. “It is important to be sure we stay in tune with the market and the demands. In my world, I tend to see [mini splits] mostly on HGTV … and not in our area, but in exotic settings. That sets a future table of acceptance, but we have not reached the tipping point yet. Ductless systems themselves have visual barriers that seem irrelevant in the Caribbean and total barriers in the suburbs.”

The appearance issue of the equipment inside the room is a familiar hurdle to anyone who has tried to introduce wall-unit mini splits to a customer base.

A few hours southward on Interstate 35, Rosenberg Indoor Comfort has diverted more of its staff’s energy to deal with general inquiries, including one unexpected type of inquiry. Rosenberg said they’ve been doing more education over the phone about what the real cost is to do this kind of job and the benefits of having a professional company perform the install.

Why would Rosenberg be making a distinction like that? Because budget-minded DIY’ers in his area are apparently reading up about mini splits and getting ideas about acquiring inverter-based comfort on the cheap.

“This can be a challenge to contractors, as there are websites that sell mini-split equipment direct to clients,” said Rosenberg. “A consumer can go online today and find ‘low cost’ mini-split equipment options. When a potential client calls us to inquire about a mini split, we answer all of their questions about how they are installed and their benefits.

“We then give them a range on how much a professionally installed mini-split system could cost, he continued. “If they are comfortable with this price range, we go ahead and set up a sales appointment.”

Parker at Command Comfort has seen some of that phenomenon, too, but his business is noteworthy for the overall commitment it made: In 2015, Command Comfort began a transition to adopting an essentially exclusive mini-split business model. If a customer visit reveals that a traditional ducted solution is probably the best fit, Parker said he refers the project elsewhere for the homeowner.

The decision to leave more traditional work was unusual and certainly didn’t receive unanimous support before he made it, Parker recalled. However, the firm went from 23 outdoor systems sold in 2014 to 114 sold in 2015, paying dividends immediately and earning an elite contractor status with a leading manufacturer.

A more recent example: The new Command Comfort office uses mini splits, and when the company tried to enlist in California’s demand response program, the utility said it didn’t even bother with offices that used mini splits because there typically wasn’t enough energy use to take back on peak days.

Sirius Mechanical has shifted gears toward mini-split work in more nonresidential settings after building the bulk of its modern business with homeowners. According to Scholnick, the trend from traditional to mini split didn’t change their hiring habits as much as it aligned neatly with them.

And his comment served as a reminder that one current obstacle for mini splits with customers and occasionally even employees (“but it’s different …”) will likely erode naturally over time.

“Our field staff is very comfortable with installing these systems — literally,” he said. “In most cases, they’re not working in a hot attic running new ductwork. For Sirius Mechanical, we tend to hire younger workers whose introduction to our industry is with ductless systems, so there’s no resistance to this technology, since it’s all they know.”