This website requires certain cookies to work and uses other cookies to help you have the best experience. By visiting this website, certain cookies have already been set, which you may delete and block. By closing this message or continuing to use our site, you agree to the use of cookies. Visit our updated privacy and cookie policy to learn more.
Home » Go Big or Go Home, Until It’s Time for Replacement Coils, That Is …
HVAC Residential MarketHVAC Light Commercial MarketHVAC Commercial MarketAir ConditionersRooftop UnitsAir Handlers

Go Big or Go Home, Until It’s Time for Replacement Coils, That Is …

Nothing lasts forever. This old adage holds true, especially when it comes to HVAC coils. There are a number of factors for HVAC service technicians to consider when replacing coils, including proper sizing.

“While coils are considered a basic component in HVAC units and systems, in coil retrofit situations, the proper sizing of a replacement coil has significant implications on overall energy efficiency and occupancy comfort,” said Matt Spink, general manager, Precision Coils, a division of Unison Comfort Technologies under The Greenheck Group. “Improperly-sized coils can lead to inefficiencies in total HVAC system operation. For example, on the liquid side — water pumps, and on the airside — fans, may consume more energy or fail to deliver expected performance.”

“... in coil retrofit situations, the proper sizing of a replacement coil has significant implications on overall energy efficiency and occupancy comfort.”

Common mistakes Spink has seen include undersized connections that impede flow and create pressure drop issues, which forces the pump to work harder; excessive face velocity, which creates water carryover and increases fan requirements; and improper circuiting, which increases pressure drop inside the coil or causes fluid velocities so low that they negatively affect heat transfer, to name a few.

Fitting the coil in the existing place with the least amount of labor has everything to do with measuring a coil, noted Dan Jacobs, vice president of sales, Capital Coil & Air.

“If you duplicate the coil in almost every respect, the performance will match and take care of itself,” he said. “If you’re ever in doubt about a dimension, smaller is always better than bigger. You can always ‘safe off’ around any coil as long as you can fit it in the space. If a coil is too big, it makes a really ugly coffee table in your shop. Too big is the enemy of measuring coils.

“Additionally, fin height and fin length are not the determining factors in measuring a coil,” Jacobs continued. “The overall casing dimensions are the most important, and you work backwards to determine fin dimensions. The depth of any coil is the total casing depth in direction of airflow. The height is the number of tubes high in any row. Depth is a function of rows deep, and height is a function of tubes in a row.”

According to Jacobs, some of the most common measuring mistakes involve the overall length of the coil, which is really the most important measurement that a service technician needs to get.

Measuring the correct locations of the connections and coil circuiting are common and major mistakes as well.

Steve Wand, vice president, Business Development & Engineering, Evapco Alcoil Inc., a microchannel coil manufacturer, said the most important thing a service technician can do when dealing with a coil failure is to find out what caused that coil to fail before selecting a replacement. 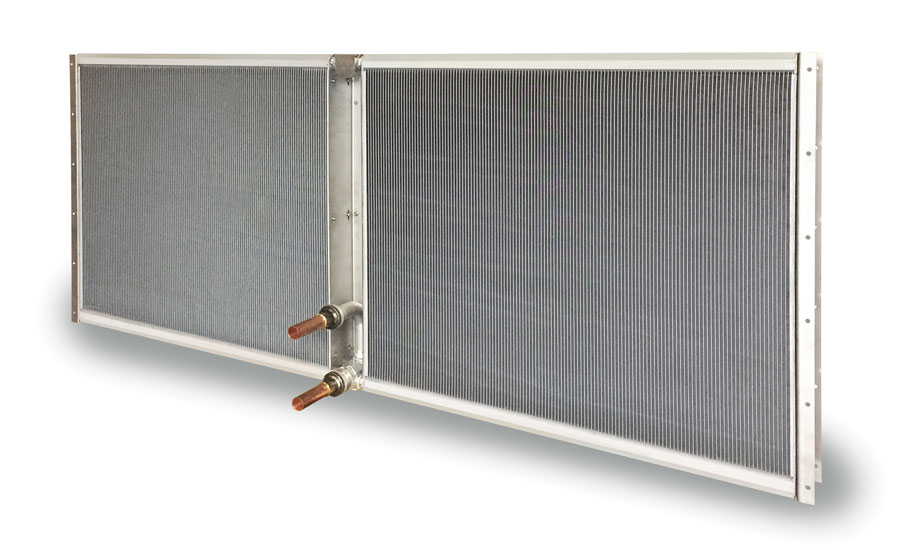 INVESTIGATIVE WORK: Steve Wand, vice president, business development and engineering, Evapco Alcoil, said the most important thing a service technician can do when dealing with a coil failure is to find out what caused it to fail before selecting a replacement.

“Even though microchannel coils are a new technology, they sometimes fail due to things like damage from bird strikes or corrosive environment situations, like a seashore or a high pollution environment,” Wand said. “If a microchannel or fin tube coil were to fail, what you want to always do is understand why it failed. And then say, ‘OK, when I put something back in there, it should last longer, work better.’ So in replacement coils, you typically want to match the same physical size as the previous coil, and make sure the airside pressure drop is the same or similar. It doesn’t have to be exact, but it should be plus or minus 10 to 20 percent. Third, overall coil performance should be the same or better than what you are taking out. For condensers, we strongly recommend epoxy coating in replacement coils.”

Wand said the most typical causes for coil failure are corrosion, thermal cycling, or vibration.

“When we see a corrosion failure, we automatically go with an epoxy coating for the replacement coil because most customers cannot tell the difference between all three failure modes — they look similar,” he said. “But it’s smart not to assume it was just vibration or thermal cycling. And the old fin tube technology is prone to both corrosion and thermal cycling. So it’s smarter to just hit it with a bigger, better hammer. For the contractor, it will cost 20 percent more, but the premium is worth it to the end user because the problems normally go away.”

Coil manufacturers have numerous tips for technicians when it comes time to size replacement coils. According to Spink, it’s important to appropriately size connections for the required fluid flow.

“Maintain acceptable face velocities for maximum heat transfer without risking water carryover or adding excessive static pressure to the system,” he added. “This parameter can vary and depends upon whether the coil is in a heating or cooling application. Also, maintain acceptable internal fluid velocities to maximize heat transfer and limit pressure drop — also application-dependent. A user-friendly coil selection program which accurately accounts for and optimizes coil sizing is critical to getting a coil that fully meets the building’s needs.”

To get a base price after measuring a coil, technicians only need to get the fin height by fin length, the number of rows, and the fins per inch, Jacobs noted.

“To ascertain which is which, the fin height is always the measurement running perpendicular to the tubes,” he explained. “Conversely, the coil’s fin length will run along with the tubes.”

“Make sure the airside pressure drop and coil performance is the same or very similar,” he said. “That’s the No. 1 thing to watch for. At the end of the day for replacement coils, you typically match it more or less in terms of performance, flow, and pressure drop. The best thing a contractor can do is look at how long the coil lasted and then make sure they put something in there that will last longer for their customer. There are situations out there where a coil will not live as long as it’s supposed to. If it lasts only five years, those are opportunities to upgrade the customer to something that will be long-term reliable.”

INCLUDE UV WHEN SIZING COILS

Contractors and HVACR specifiers sometimes forget that in the first year alone, there can be a 10 percent decline, depending on the environment, in cooling coil capacity from typical use, such as a buildup of mold, biofilm, and other organic compounds, noted Daniel Jones, president of UV Resources. 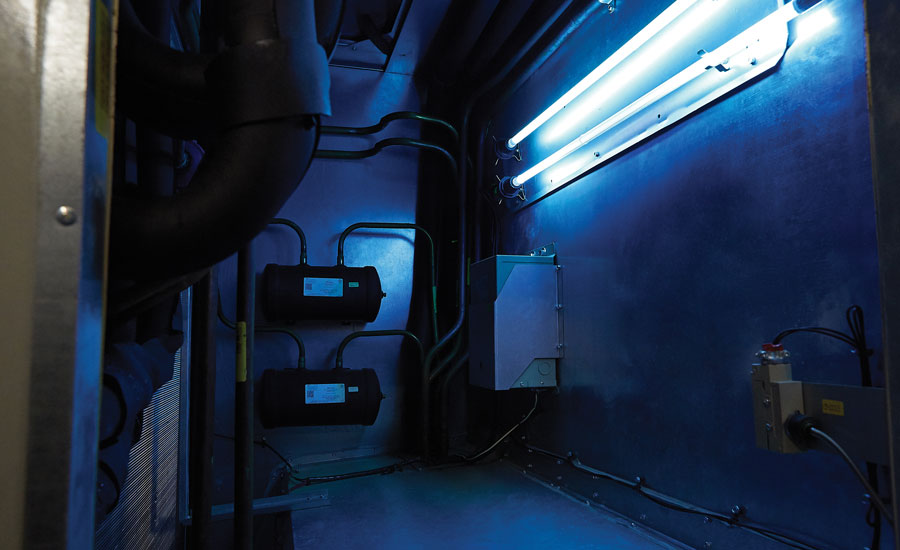 “The microbes act as a layer of insulation on the coil fins, forcing the entire system to work harder to meet set temperatures,” he said. “Heat-exchange efficiency declines by up to 15 percent, and energy costs rise. In an attempt to clean coils, facility managers often resort to manual pressure washing or chemical treatments — these methods are costly, labor-intensive, and, worst of all, temporary. The coils will foul again and require further attention.”

Applying ultraviolet germicidal lamps (UV-C) downstream of the cooling coils during the sizing and installation process will protect the system. UV-C energy will kill any microbes that try to proliferate on the coils, maintain original heat-transfer capacity and pressure drop levels, and keep the energy cost penalty of an inefficient coil, of up to 25 percent, at bay, Jones explained.

“The result is no call backs for temperature complaints, and no ‘dirty sock’ odors coming from the HVACR system,” he said. “The lamps are replaced roughly once per year and provide continuous 24/7 protection of HVACR system coils and other components.”

Additionally, installation is affordable, costing less than 15 cents per cfm, Jones noted. That means for a 10,000 cfm system, adding UV-C would cost less than $1,500 — even less in a residential application — and a 24/7 operating cost of less than $188 per year at 10 cents per kW.

“That, in turn, is less than 1 percent of the average 18 percent power saved to operate the air conditioning system,” Jones said. “Also, field reports indicate that the first-cost of a UV-C system is less than a properly performed coil-cleaning procedure, especially when considering the cost of system shutdowns, off-hours work, overtime wages, and/or contractor labor costs.”