By Herb Woerpel
While spring officially starts tomorrow, several HVAC contractors are still waiting for winter to arrive. The national average temperature across the 48 contiguous states in January was 36.3 — 5.5 degrees above the 1901-2000 average, according to the National Oceanic and Atmospheric Administration’s (NOAA) National Climatic Data Center. Data shows January was the fourth warmest January on record since 1895, and the warmest since 2006.

“We are experiencing the warmest winter we’ve had in many years,” said John McCarthy Sr., owner of McCarthy’s One Hour Heating and Cooling, Omaha, Neb. “We only get a few days of cold and then it warms back up. It is usually the total opposite.” 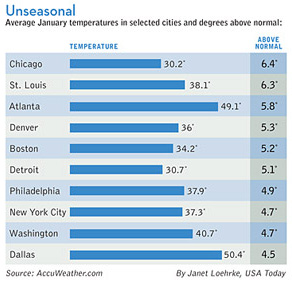 Arizona, Kansas, Minnesota, Missouri, Nebraska, North Dakota, Oklahoma, South Dakota, and Wyoming all experienced January temperatures which were among their 10 warmest. Florida and Washington were the only states with near-average temperatures. No state experienced cooler than average weather, according to NOAA.

Scientists believe the above-average temperatures are caused by changes in Arctic winds, referred to as the North Arctic Oscillation (NAO), which redirects snow and cold. The low air pressure in the Arctic region creates a jet stream that blocks cold air from leaving and causes winds to spin faster this winter, keeping cold temperatures farther north than usual.

The emergence of La Niña is also playing a factor in warm winter temperatures.

La Niña is characterized by unusually cold ocean temperatures in the eastern equatorial Pacific, as compared to El Niño, which is characterized by unusually warm ocean temperatures in the equatorial Pacific. La Niña tends to bring nearly opposite effects of El Niño — wetter than normal conditions across the Pacific Northwest and dryer and warmer than normal conditions across much of the southern tier.

“A positive NAO means the low that’s normally near Iceland, and the high-pressure area near the Azores, is stronger than normal,” said Chris Orr, certified consulting meteorologist. “The result is a stronger than normal jet stream on a more northerly track. This jet stream has kept the really cold air over Northern Canada and Alaska.

“But, it’s more complicated than that because we have to factor in La Niña and El Niño. Right now, we’re starting to see La Niña phase out, and we’re going to a neutral pattern across the tropical Pacific by the end of spring.”

Contractors nationwide are reporting fewer installations and in some cases staffing reductions, due to above-average temperatures.

“Because of the weather, we’re experiencing fewer calls and have reduced the hours of work for our techs,” said McCarthy Sr. “The replacement market was hit hard and we had to lay off office staff, but we’ve stayed steady in our service staff. Our installation staff has painted, cleaned, and arranged our shop this year as much as possible.”

“It has been unseasonably warm; we’ve been off about 17 percent on heating degree days since November,” he said. “We’ve experienced a softness this year and our year-to-year sales are definitely down. Of course, we have also seen the end of the tax credit that stimulated business in 2010 and 2011, and the cost of natural gas is at a low, which is further depressing utility bills.”

Matt Marsiglio, service manager at Flame Heating, Cooling, Plumbing, and Electrical, Detroit, said his company has received fewer demand service calls and less nonmaintenance, furnace inspection calls. Because of the mild weather, the company has had to implement layoffs across multiple departments.

“Southeastern Michigan has been well above average in terms of temperatures while precipitation and snow have fallen below average,” he said. “This is by no means what we’d call a typical Michigan winter. It sounds horrible to say, but the worse the weather, the busier we are. As much as I would like to believe we’re not weather-dependent, this winter’s warm temperatures have caused us to tighten our belts and watch every penny we spend.”

“The winter has been terrible for business, but thankfully for a strong service agreement base, home energy audits, solid national accounts in a commercial service, and some sizable commercial construction projects, we are holding our own,” he said.

“Having 50 degree weather in January in Chicago has been great fun for many of us, but for the ice-rink managers, snow-plow operators, and HVAC company owners — it’s created more than a few challenges,” said the Beckman Bros. Inc. website. “Well, it’s time to turn our challenges into opportunities through promotions.”

Not All Bad News

While the warm winter has been a burden for some, it’s been a boon for others.

“The National Weather Service records this winter as the third warmest so far across the frozen tundra,” said Chris N. Linn, vice president of marketing and development, Bassett Mechanical, Kaukauna, Wis. “Snowfall is way down, which makes it less hazardous to access rooftop and other outdoor equipment. Counter to what some might think, our service business has continued to grow and is up about 12 percent over last winter. We’ve seen a good level of projects with existing customers and call-in work from new customers. We haven’t had to lay off technicians, and we’ve actually hired additional salespeople.”

“We are certainly dealing with extreme weather. It is about 53˚ right now and usually it is about 28˚,” he said. “Our service calls have been a bit slow, but thanks to some really extreme weather events, this has been our busiest year ever.

“We were hit with Hurricane Irene and Tropical Storm Lee, which actually really helped us. Units needed to be replaced, and then we caught a wave of people looking to upgrade. The unfortunate weather has actually worked in our favor.”

Hoping for a Hot Summer

NOAA is predicting a warmer, drier spring in the Southern states, and colder months across the Northeastern United States.

“We expect La Niña’s impacts to continue, even as the episode weakens. February to April, there is an increased chance of above-average temperatures across the South-central and Southeastern U.S., and below-average temperatures in the Northwestern U.S.,” reported NOAA’s Climate Prediction Center’s three-month seasonal outlook.

Meteorologist Orr expects spring and summer to be hot and sticky.

“I expect a warmer and stormier than normal spring for most of the country,” he said. “There will be surges of cold air from the north every week, but these will only last a day or two at any one spot as the storm systems whip along with the fast jet stream. This will also bring more severe weather to the country, especially affecting areas east of Billings, Mont., to St. Louis.”

Contractors are hopeful the winter heat wave will carry over to the summer months.

“We have no idea what the spring will bring, but we have our fingers crossed and are hoping for the best,” said Marsiglio. “A perfect wish would be high temperatures and high humidity. All we need is a little warm up, and we’ll be going strong.”

While shipments are down, the Air-Conditioning, Heating, and Refrigeration Institute (AHRI) remains optimistic the market will reconvene this spring.

“The mild winter has affected shipments of heating products and likely caused some consumers to defer the replacement of equipment that is nearing the end of its useful life,” said Stephen Yurek, AHRI president and CEO. “But, if you look at historical shipment numbers, there is pent-up demand due to economic conditions that warmer winter weather can forestall only for so long.”