The results are in and the news is good — the post-recession era for HVAC contractors has been a bright spot, at least for the first half of 2011. In a recent 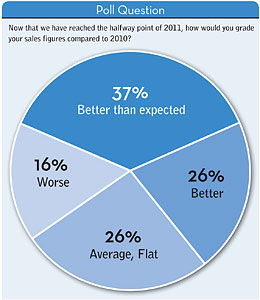 unscientific online and email poll that ranked business activity according to a standard A-E grading system, most of 142 HVAC contractors responding gave themselves high passing grades.

The poll, conducted in July 2011 at Linkedin.com and through direct emails, showed that there is a lot of optimism going into the end of 2011, thanks in part to a hot summer and a hangover from energy tax credits. But the news was not all good for everyone as some contractors continued to struggle, mostly because of their local market conditions.

The poll question was: “Now that we have reached the halfway point of 2011, how would you ‘grade’ your sales figures compared to 2010?”

• A: Better than expected

• E: I wonder if McDonald’s is hiring

A total of 53 people (37 percent) chose A — better than expected. Another 30 people (21 percent) chose B — better. The two combined accounted for 58 percent of the vote, a clear majority showing that business was better for the first six months of 2011 compared to the same time last year.

There were 37 people (26 percent) who replied with C, feeling that business has been average or flat this year. On the negative size, 21 people (15 percent) said business was worse and even one respondent wondered if McDonald’s was hiring.

For Jeff Schneider of Schneider Heat and Air Inc., Evansville, Ind., — it’s been a mixed bag. “I’d say A on the volume of work and C on net profit, which is due to ticket averages being lower and fewer high end sales compared to last year’s tax credit surge.”

One contractor used the strength of the local commercial HVAC market to give a boost to his business. Frank Detmer of Detmer & Sons Inc., Fairborn, Ohio, said, “I’d give ourselves an A. We have had a tremendous increase in the commercial install division. In fact, by the middle of June we had already beat our entire 2010 commercial numbers. However, we have seen a slight drop in residential install while commercial and residential service has remained steady.”

Joe Ranck of Robert H. Ranck Inc., Lancaster, Pa., said the first four months of 2011 were bad and his company had to lay off employees for the first time in 20 years. But everything changed in May and June. “June turned out to be our best month ever in sales and profits,” he said. “It alone made up for the previous months and July looks like another banner month. Our year-to-date sales are up less than 1 percent but after such a slow start we may be OK in the second half. I’m optimistic.”

Some contractors said that business was flat or slightly better than last year, which may be a result of fighting against energy credits and a somewhat renewed confidence in the year following the recession of 2009.

“I give us a C — same as last year,” said Kevin Schaafsma of Schaafsma Heating & Cooling Co., Grand Rapids, Mich. “Last year was a very good year and we expected to be down this year. That hasn’t happened. We are almost the same as last year except service is up slightly and installations are down slightly, while overall sales are the same.

“One thing we have noticed this year is people are not buying the top of the line. They are still buying higher efficiency but last year the tax credit brought the best equipment more into their budget.”

Some of the other comments to the poll and email question included:

• “Thank God for the 90 percent of folks that are employed, because of them and the hot summer in Houston, our sales are up about 15 percent this year.”

• “I’d have to say D — worse. The hot weather in our area came late and most customers are not spending money on expansions or upgrades.”

• “Sales are better than expected. It is a down economy and people are not buying the top end equipment as normal, but the extreme heat is creating sales. We could not be any busier and are thankful for it.”

• “Things have really flattened out for us with the reduction of the tax incentive credit and the dry R-22 condensers replacing complete systems that we were selling last year. If things continue it could be a tough year.”

• Service and residential are strong — better than last year. Commercial/industrial construction/remodel is flat, but the work we have is profitable. We are very satisfied.”

• “Extremely much better. Being a smaller family company we have gotten bigger every year since we started in 1977 and last year was our biggest and best year. But this year is far surpassing last year.”

• “The first quarter really slacked for us. The second has been better but not enough to make up the difference. We are still headed into fall behind last year’s numbers and as such we have been stepping up our marketing efforts to our existing base and reaching new customers.”